Not only is he a fascist creep, he makes garbage pillows.

My parents are ageing book-worms (so am I, for that matter!) and my father is particularly stubborn about his seating arrangements. When he moved to Johns Hopkins from Columbia University, he took along a 1960s vintage low-backed office chair that was notable for its lack of ergonomics. The padding was disintegrating latex foam, and it had molded in arms that were not the right height. The chair itself had only one height setting, so dad built a footrest and a romanesque sort of wooden plinth to get it to more or less the right height to match his desk. By the mid/late 1990s the chair had taken its toll and dad was suffering from back spasms and shuffling about like a proto-cripple. It wasn’t until that turn of affairs that I noticed the horrible Siege Perilous (which I translate from the mediaeval French as “dangerously chair”) and bought dad a nice new tall-backed Backsaver (brand) office chair. Problem solved, mostly, except that he has books all over the house and therefore wants to read all over the house and to properly solve the problem, I’d need a chair-fleet.

Dad and mom also have various old people aches, and have adapted to them by the state-of-the-art (if you’re from the Renaissance) technique of shoving various pillows of varying hardness behind their backs, under their knees, behind their necks, etc. Like with the crippling chair, I blithely ignored the ongoing war until I got caught in the crossfire. My mom got one of those airplane neck support thingies, and took to wandering about with it looking like she was wearing some sort of elizabethan ruff gone horribly plump. And, around that time, I bought one myself because I had a particularly evil trip to Australia coming up – I flew to Australia, went from the airport to a conference center and delivered a talk, then went to the airport and caught the evening flight back to Boston where I had another talk to give; Australian customs concluded I had to be a smuggler because nobody flies to Sydney for 5 hours, and sweated me in a little room in immigration while they repeatedly dissected my only luggage, which was my briefcase. The neck thingie I got was great (I lost it in Chicago a year later) and will filled with little expanded polyester beads – light and heat-reflective – best of all, you could squish them into position when there was no pressure on them but when you lean on them they lock together nicely into a supportive surface.

That’s how I got into the pillow business. I came home, searched on the internet and found a source for the expanded polyester mini-beads: 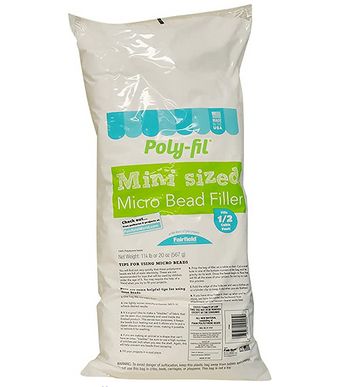 A 20-oz bag like that is about the right amount for a single regular-sized pillow! It’s not super cheap – $30 – but it’s not terrible, either. Then, I filled a “bedbug proof” zip-up pillow protector with the beads, zipped it up, flipped it around, and stuck it in another zip-up pillow protector, to reduce the chance of leakage. Believe me, you do not want to get these things all over; once they get a static charge they stick like burrs and they float like dandelion fluff. To be completely honest, I filled my pillows on the porch so that any unauthorized beads would blow away and maybe choke a hunter to death. 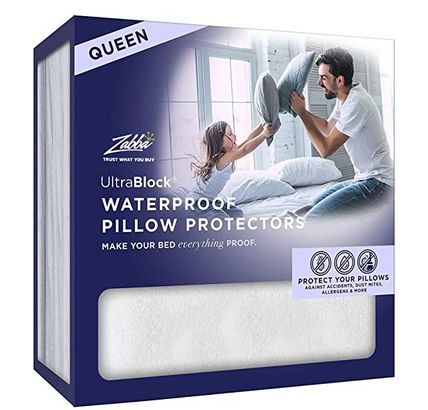 MyPillow guy sells pillows made of shredded memory foam, which are – no doubt – smooshy and comfy but do not compare to the mixed feather/down pillows I prefer. But for reading pillows a smooshy pillow is absolutely the wrong thing. So my bed now has 2 sets of pillows: one for my head, another for my arms or whatever. I made sets in several sizes for my parents, since you can pack them into a crack in your chair and if you push the air out of them they’re like slightly squishable concrete or clay. The pillow protectors are nearly air-tight, so you can have the pillow be light and fluffy but packable, or dense and packable. Since then, I’ve expanded my pillow-making efforts and I have a set on the library day-bed, which doubles as a guest bed, and I’ve had enquiries regarding from whence they may be obtained.

Now, you have the secret. I don’t care if you decide to go into business with this obvious idea (which is only a bit less obvious than shredded memory foam!) but if you do, just don’t donate money to fascist movements.

Kim Il Sung supposedly slept on pillows filled with hummingbird feathers. I read that somewhere, and can’t find a reference, so I may be wrong.

I knew someone who was into yarn-spinning, who had a pillow stuffed with samoyed dog fur that had been laboriously de-stenched. Apparently it’s great insulation. I’d rather just put my head on the dog.

Since I am on the subject of general  bed-stuff, there is another topic: weighted blankets. I knew someone who swore they could no longer sleep without one. You can also get the beads that are used to fill those on amazon, too. I have been tempted to experiment with a weighted combat-ready tactical pillow, perhaps with a cordura shell and a mix of light beads and weighted beads. You could put a gun under it, and it wouldn’t slide around! [amazon]

The pillow protector packaging says “make your bed everything proof” which might make for some fun lawsuits in the event of flood or fire.

MyPillow guy is probably selling shredded left overs from viscoelastic memory foam toppers. I bet he buys the off-trimmings and spoilage from other companies. Then shreds the spoilage and packs it and sells it. Good recycling!