My grandfather used to own a little toy steam engine that ran on live steam; my dad loved the thing and so did I. It wasn’t until a few weeks ago that I realized I was looking at an industrial age in a nutshell. Also, a very small kid-sized bomb that you can give a kid and tell them “run outside and play.”

Then, a few days ago, youtube coughed up a video from a channel I loosely follow (“blondihacks”) which is someone teaching herself how to be a machinist. It’s actually pretty cool but I find it frustrating because it just makes my hands twitch, as I want to do that kind of thing but I’m already over-committed by a factor of 5, and my milling machine hasn’t got a digital measuring read-out (DRO) – it looks fascinating but I just don’t think I want to go there. And, when I subvocalize the “… yet” at the end of the sentence, part of me knows that I’m not a young person with a 40 year-long runway to learn machining; I’ve got to stay focused at what I’m bad at and I can no longer take on the whole world.

The steam engine was the thing that launched the industrial age [human civilization was already unsustainable but the industrial revolution really put us on course for heat-death] and the invention of precision. Here I must insert a plug for Simon Winchester’s excellent book The Perfectionists [wc] which is about the evolution of precision processes and how they are at the heart of modern civilization. There is an account in Winchester’s book about how Watt invented steam engines, but it was John Wilkinson who made them work correctly. Watt’s pistons were not machined tight enough to the bore and blew steam everywhere, which was quite dangerous under pressure, and Watt was trying various combinations of cork gaskets and oakum to stop the blow-by, when Wilkinson stopped by and noticed the problem. Wilkinson had invented what today we’d call a “boring bar” – not “boring” as in droll and uninteresting, but “boring” as in “boring a hole” or “the bore of a cannon”; the boring bar is a single-point cutting tool that makes a nice, clean, straight, cylindrical cut through a cannon. Or, as it turns out, a steam piston. Winchester’s account is that Wilkinson sent for a massive piece of steel and bored and turned a piston that fit so perfectly that there was no blow-by. Winchester’s book is chock full of fun stories all of which amount to “increasing precision is the pre-condition of modern technology.”

There are certain manual processes that result in amazing precision, such as flattening surfaces by using 3 surfaces and interchanging them as you rub them against eachother. It really does work! (and apparently it’s how Charly makes whetstones for knives!) Once you have a couple of pieces of granite that are flattened in that manner, you now have a surface that is flat enough – called a “surface plate” – that you can accurately assemble a piece of high-precision machinery, like a lathe. 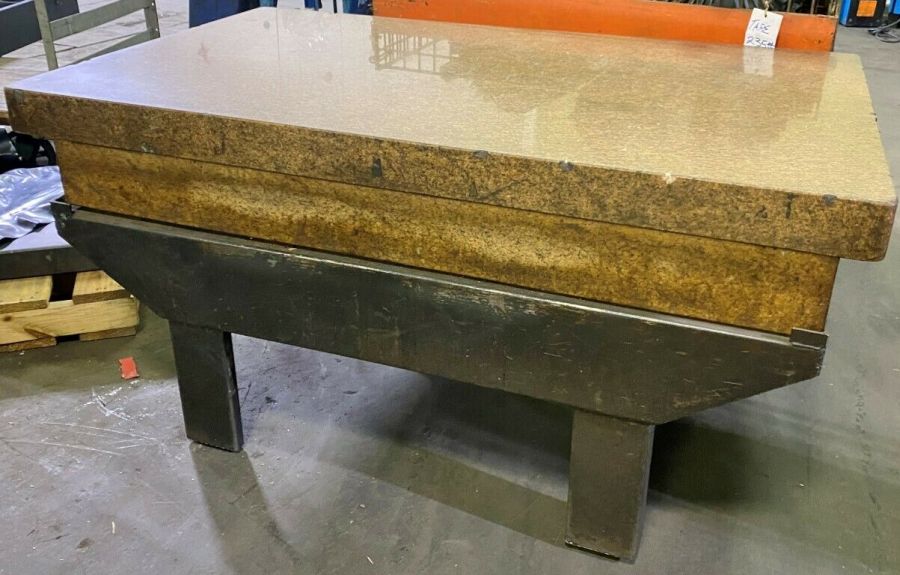 That’s a lovely example of the kind of surface plate one might assemble a lathe on; it’s on Ebay right now for a measly $950. The problem is: you are responsible for shipping it. I have no idea what a granite slab that size weighs, but I’m sure that’s out of the reach of a typical small shop fork-lift and, you’ll notice, there are no lifting points on it. Moving something like that is work for an experienced professional rigger with a flatbed semi and a crane truck. With the advent of CNC machines, the market for surface plates has evaporated and you can pick them up for next to nothing on Ebay (don’t ask me how I know) (the first rule of Surface Plate Club is “don’t get me started about surface plates” and the second rule is “don’t bid against a surface plate fanatic on ebay”)

Once you have a single flat plane and a milling machine, you can produce right angles by putting another flat plane at right angles to the first, which eventually evolved into “try blocks” which are steel blocks machined square on a milling machine, that you can position on the surface plate. From there, it’s just geometry. If thinking about this makes your heartbeat quicken a little bit, as it does mine, you might enjoy This Old Tony’s episode on Sine Bars [youtube] which is what you do when right angles are not enough.

Now you can imagine my wistfulness as I watched Quinn machining a steam engine.

Assembling a working steam engine has to be a right of passage for a machinist, and I suspect that many student machinists beat their heads on surface plates in frustration as their teachers inspected the results of their work. If your steam engine starts to blow-by, or leak, or vibrate, or explode even slightly, it shows you screwed up. You can’t fool physics. And, if you think about it, that little machine contains most of the machining skills necessary to build an industrial revolution, by definition. The only part the machinist didn’t do is sand-cast the iron parts, but they’re still truing them up on the milling machine.

That little engine is a machinist’s zen koan; the machined parts must be correct, the bores must be aligned, the bearings must be to tolerance, and best of all it’s small enough that if you screw up the mistake is glaringly obvious. If you decide to watch the video above, there is one moment when Quinn makes a near-fatal mistake and corrects it brilliantly – I cheered out loud.

Another way of doing amazingly high tolerance metal-work is to give an old Japanese guy a bunch of steel and a hammer and some polishing stones and eventually they can make you a katana. Which is the highest form (opinion alert!) of hand-machining humans do. Since a Japanese sword is not derived from a computational model; i.e.: the blade is not defined by a Bezier curve, it just looks like it – I don’t know how one could assign a precision measurement to the accuracy of its shape. But if you look at the facing sides of a masterpiece katana, I’d bet they’re symmetrical to within a thousandth of an inch. And don’t you dare take a machinist’s caliper anywhere near a priceless katana, or you will be murdered by angry old Japanese people. The ends of a machinist’s calipers are hardened and will easily scratch composite steel. 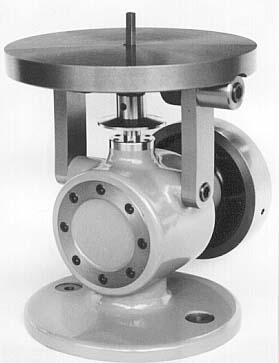 All of this meandering thought is because I keep wondering if I should try to build myself a die filer. I sure could use one in the shop. But the pre-built ones you find are expensive and heavy and have usually been beaten up pretty badly. You want a die filer where the platen is turned as flat as your lathe can manage, and all the surfaces are milled square.

That little beauty is an MLA-18 filing machine, and you can buy them for less than $200 “some assembly required” [mlatoolbox]

Except that “some assembly required” means you’ve got to turn that platen on a lathe, and mill and drill and tap and clean and turn and mill and powder coat and basically have a hell of a time building it. It is also a koan, and it’s one I don’t think I am ready for. I have my old Bridgeport mill, and a metal lathe with a DRO (no DRO on the Bridgeport, I’d have to … measure things)

But, damn, will you have a look at that thing? I want to hear it purr like a kitten. The bottom mechanism that translates the horizontal rotation in to vertical reciprocation lives in an oil-bath behind that bezel with the screws and the machined edges. That’s got to be right, or it’ll leak and then the bearings seize and the machine is 30lb of scrap metal.

I am tempted to buy the parts and work at them slowly over years, leaving them mostly sitting on a surface plate under a layer of WD-40, glaring endless reproach.

Anyhow, congratulations, Quinn, on your steam engine! It takes a whole industrial revolution to make a thing like that.

The Clearfield/Altoon, Pennsylvania area is where America’s great industrial-age machine shops were located. The big machine shop in Clearfield was torn down a few years after I moved here and an ethanol cracking plant was built on the slab. There are old old-school machinists kicking around out here and I’ve talked to a few of them, before the pandemic. They’re nice folks but they’ve generally been generous about knife-making, “it’s an art form, it’s not machining; you guys are more like wood-workers than machinists.” Ow.