We have also been getting uncoordinated shoveled shit-tons of bulk mail, consisting mostly of lies or vaguenesses printed in large block fonts with stock photography. Seriously, both parties are shit at marketing. You can feel the stupidity of the Trumpists drooling off the page. Trump 2020: No More Bullshit; oh, my goat, you ignorant authoritarian submissive, are you saying you’re voting against Trump, the ur-fountain of bullshit – the black goat of the woods with the thousand young – the burbling well that never shuts the fuck up!? Or, what? I keep thinking about knocking on some people’s doors to ask them but there are a lot of guns around here and anyone stupid enough to put that sign in their yard is stupid enough to think homicide is justified response to political snark. The Biden signs are as exciting as processed American Cheese Food, which makes sense because that’s what Biden’s head appears to be sculpted from. What bothers me is that these elections supposedly cost BILLIONS of dollars, which means that the “new media” majors that you wished would shut the fuck up when you were an undergrad with a writing seminars major are making gigantic amounts of money peddling this mass of uncreativity when they’re barely good enough at marketing communications to be drawing smiley faces on Starbucks coffee cups. I don’t begrudge them the money, but one of the unfortunate side-effects of this two-party system is that one side is going to win and the marketing idiots who designed these shitty messages are going to take it as validation that they won and we’ll have decades more of it and they’ll be insufferably patting themselves on the back for their perspicacity when really all that drove the campaign was “palatable” versus visceral loathing.

Imagine my joy when I saw one fellow traveler: 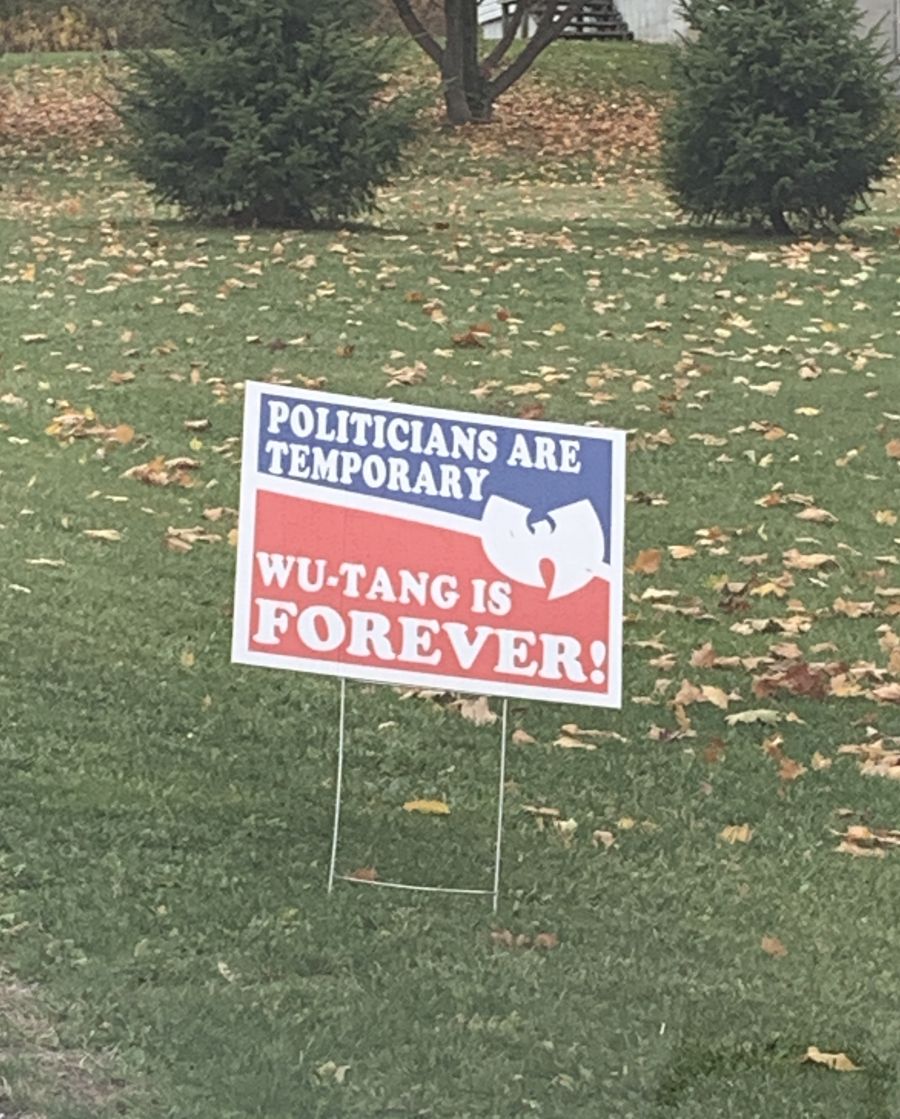 Perhaps the most disappointing part of the sign war is that people go around defacing the other side’s signs. I saw one Biden sign that someone had spraypainted “fuck” across; that was also, no doubt, some marketing genius. It has become emblematic to me how mediocre this election is, and what a basically shitty bunch of people make up the US political class. It makes me wish that maybe we hadn’t stopped the other kids from beating up the one who wanted to be “class president” back when they were trying to indoctrinate us with the idea that democracy was not a futile masturbatory exercise.

I’ve been a bit quiet lately. The whole thing with my ankle/gout made me just sit around on the bed, sulking and reading books on edged weapons design, instead of doing anything useful. And, I think that – rightly – the politics of “getting the vote out” combined with “suppressing the vote” make for such a compelling story it’s like watching a documentary about the 9/11 terrorists flying those planes into buildings on the in-flight video system of a plane you’re flying on, while you’re flying into a building. It rivets my attention, to no useful point whatever. It reminds me of importance of being creative and trying to make things you think are beautiful, and can believe in, because right now this world is full of people creating things that are ugly and even they don’t believe in (or they’re stupid enough to believe their own bullshit) It’s hard, right now, to gin up the energy to put one foot in front of another.

One thing that I see as a possible silver lining: the electorate appears to be good and pissed off about vote suppression. Its possible that both parties will go “whoah that seems to have boomeranged” when they notice that all they managed to accomplish was bringing a huge number of voters up off the couch to stand in line.

You Kids Get Offa My Lawn » « Tom Lehrer’s Bequest