San mai is Japanese for “three layers.” A few years ago, one manufacturer sent around “cease and desist” letters to many bladesmiths that were using that architecture, since their company felt they were the ones who made san mai great again, or something like that. They were roundly told to shove it, and it stuck because the manufacturer was not willing to spend Disney-amounts of money on lawyers.

“Ni” is not just what knights say, it’s Japanese for “two”, so “ni mai” is two-layer, which is a typical blade architecture for a chisel-ground blade (including: a chisel) like a sushi knife (“yanagiba”) or a kiridashi. Nobody does “shi mai” (4-layer) because then there is no unique piece of steel making up the edge. “Go mai” (5-…) is not uncommon, especially among makers who enjoy laminating nickel metal or copper in the transition-zones between the core and the faces.

The manufacturer who sent the “cease and desist” letters considered themselves as having perfected the production of stainless/high carbon/stainless three-layer blades. It’s a neat construction, to be sure, but as I mentioned in my earlier posting, you have a lot of additional considerations welding high carbon to stainless. It took me a total of 6 attempts to get the billet that I have been working on, though I have had several other successful weld-ups.

Grinding the blade, I was constantly examining it for delaminations in the weld, or cracks in the edge. So far, so good. 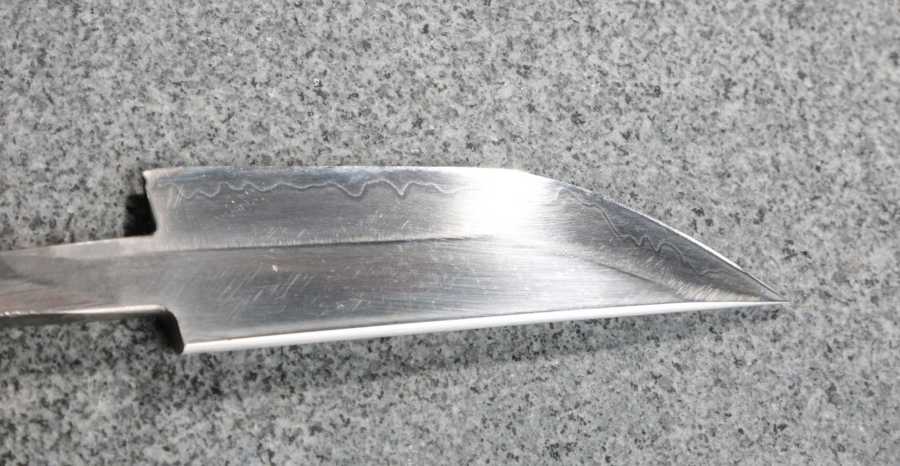 For all intents and purposes we’re out of the woods, now. All that’s left is final polishing and fitting the handle and sharpening the edge. I can still ruin it by dropping it on the floor, or something like that.

Today I discovered, quite by accident, that there is a sintered metal processing company in Philipsburg, PA. That’s 10 miles from my house and I think it’s the large industrial building I’ve ignored for years, on the other side of the grocery store. As they say: “small world.” I’m going to pay them a visit sometime in the next something or other, with a few blades in hand, and see if I can get a tour and maybe learn about their process’ pricing.

Sintered metal production is basically industrialized cannister damascus. They use a CAD/CAM system to machine a press die out of tungsten, then fill the mold with powdered steel alloys and put it in a press that heats it in a controlled atmosphere, then squishes it with a large tonnage: boom, welded metal in a complex shape. The resulting metal is better than machining it from a billet, because there are no flawed billets or machining byproducts and stresses. I believe powdered metal processes are how a lot of fancy complex metal shapes like the connecting rods in a Ferrari are formed (they get additional machining on the blanks). If you’re thinking ahead, you’ve probably already figured that the process can be extended to 3D printing with powdered metals and then homogenizing/welding them in a controlled atmosphere. That’s basically the technique used by some knife-makers who assemble cannister damascus by forming inner shapes out of monosteel, then surrounding them with a variety of combinations of sintered powders.

My impression is that, since this is the state of the art in metallurgy, it’s probably not cheap and the people doing it are busy. I’m guessing that the machinery to do it isn’t cheap, either – your tool-chain (for making the dies) starts with a $100,000+ CNC mill and a machinist that works on the stuff probably makes good money: they’re CAD/CAM artists as well as machinists, and probably system administrators, as well. I’d guess, at random (because of the components needed) that a controlled-atmosphere forging press capable of generating and surviving the necessary heat, probably starts around $500,000 and goes up sharply as the size of the work objects it can handle increases. Tools like that are interesting: they take over your life. I know a retired IT security guy whose dream retirement was to refit an old CNC machine and learn how to make stuff with it. A few years later, he was in business, because he needed to do work projects to pay for the components of the machine, and besides, he had people like me asking him to CNC master mold-objects to make soap molds, etc. Now, he’s got two full-time jobs, which is a lot for a retired academic. 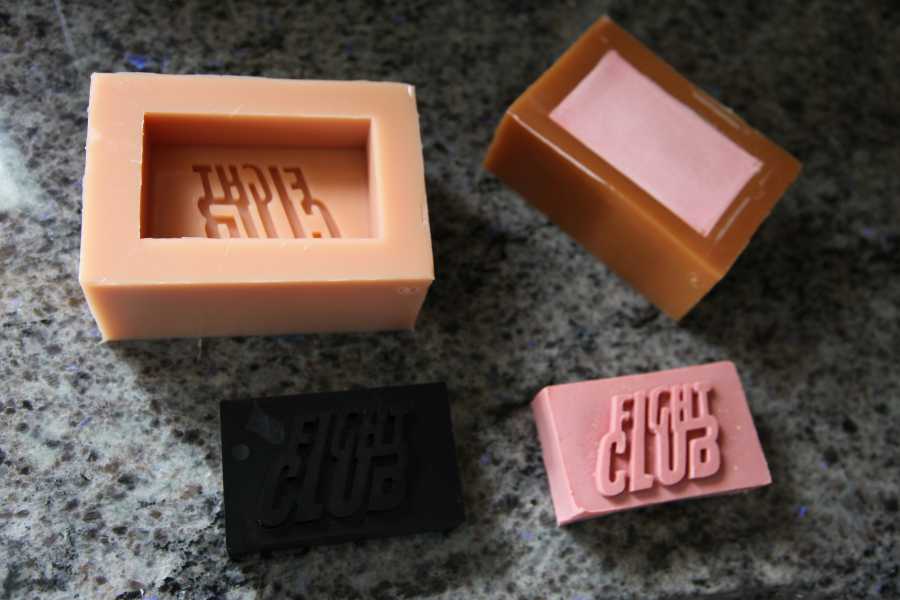 I have to admit I daydreamed a bit about putting down a layer of stainless powder, then tracing a JPEG on it in high carbon steel. Or, if I understand the process at all, you could make patterned steel around a core, in a single-pass operation.

Yes, Please » « Pseudonyms On The Internet