CNN describes what sounds like a fanciful situation; it’s obviously the right thing to do, and it worked.

Conservatives want to pretend they have short memories (which is odd, since they are always a’pinin’ for their well-remembered days in dixie) and that allows them to say “such and such won’t work” when there are plenty of historical examples of people making it work. Their strategy is to say “it cannot be done!” which then becomes their excuse for cutting the budget, or turning the people out to the street, or whatever. Can’t have affordable health care? OK, let’s just forget we are the country that helped beat the Third Reich, and throw up our hands in despair and give up. That is, after all, what Reagan did with mental health: “oh, wow, we have a mental health crisis in this country. But, we can’t do anything, so let’s close the hospitals and you can all go live under bridges in Los Angeles where it’s warm.” Meanwhile, Reagan got a full court press* to help conceal his alzheimers’ from the public, because it would mean George H W Bush would have become president, which, he did anyway. Right there, is the quintessence of dishonesty that is conservative politics.

Right now, we’re looking at something everyone with a brain saw coming: the republicans are trying to “fix” Obamacare but they have no actual “fix” except to declare it dead. Then, “oh, wow, we have a medical care crisis in this country. But we can’t do anything so let’s stop trying and you can all go live under bridges in Los Angeles where it’s warm.” Of course, if they need a hand out, they expect one, but if someone else needs a handout, they’ll punish them for their “weakness.” Is that about right?

Around 30 years ago, a town in Oregon retrofitted an old van, staffed it with young medics and mental health counselors and sent them out to respond to the kinds of 911 calls that wouldn’t necessarily require police intervention.

In the town of 172,000, they were the first responders for mental health crises, homelessness, substance abuse, threats of suicide — the problems for which there are no easy fixes. The problems that, in the hands of police, have oftenturnedviolent.

Today, the program, called CAHOOTS, has three vans, more than double the number of staffers and the attention of a country in crisis.

CAHOOTS is already doing what police reform advocates say is necessary to fundamentally change the US criminal justice system — pass off some responsibilities to unarmed civilians. 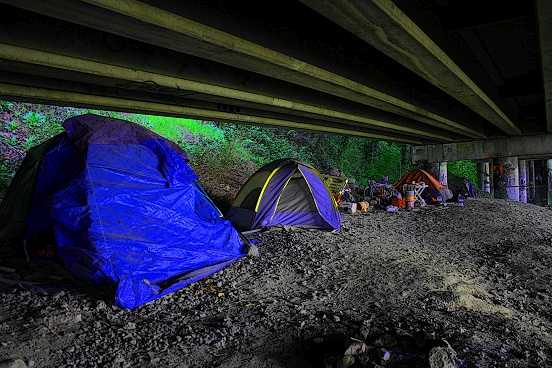 In the richest society in human history, “go live under a bridge” is not acceptable.

OK, so this is a bit silly, but I actually have some experience setting up emergency response services (The Fuel Rats) and what that taught me is that people feel great when they can help, but you need a good infrastructure to support them, so they don’t waste time doing anything except helping people. That’s one place where I have some sympathy for cops – not only are they supposed to fight crime, shoot drunks in parked cars, etc., they are supposed to deal with unexpected situations. Situations that the cops, being cops, solve with gunfire. But if they had a better support infrastructure it would be more obvious where they are being incompetent or malicious. Or, maybe, it would help them do their job. So, part of what the town in Oregon had to build was a dispatch system that carried more precision than just “scary person, go deal with it” – I know a lot of that’s because I’m an ex-IT guy, but I see this as a problem in general systems theory [stderr] Systems handle complexity in the wrong ways unless they are carefully coached into handling it right – cops get put into a situation and they feel they have a lot of leeway because the entire system, from that point on, is cop.

CAHOOTS comes from White Bird Clinic, a social services center that’s operated in Eugene since the late 1960s. It was the brainchild of some counterculture activists who’d felt the hole where a community health center should be. And in 1989, after 20 years of earning the community’s trust, CAHOOTS was created.
It stands for Crisis Assistance Helping Out on the Streets and cheekily refers to the relationship between the community health center that started it and the Eugene Police Department.

Most of the clients White Bird assisted — unsheltered people or those with mental health issues — didn’t respond well to police. And for the many more people they hadn’t yet helped, they wanted to make their services mobile, said David Zeiss, the program’s co-founder.

“We knew that we were good at it,” he said. “And we knew it was something of value to a lot of people … we needed to be known and used by other agencies that commonly encounter crisis situation.”

In other words: they found people who cared. If you want police, you want to find people who control and dominate. It’s  completely different kind of person.

It works this way: 911 dispatchers filter calls they receive — if they’re violent or criminal, they’re sent to police. If they’re within CAHOOTS’ purview, the van-bound staff will take the call. They prep what equipment they’ll need, drive to the scene and go from there.

Yeah, see, that’s applied rocket science. You cannot expect a dispatcher to figure that sort of thing… Except, you can. I know it was not “real” emergencies, but the Fuel Rats dispatchers (I proudly earned my ‘dispatcher hat’ as Fuel Rats Dispatch #1) learned really quickly how to triage problems, and put the right resources, in the right quantity, in the right place. Sure, it was a game, but when you’re in IRC talking to someone who displays godlike calm and walks you through a few questions (“are you bleeding?” etc) you can steady down a situation with no need for .40 calibre bullets.

The program started small, with a van Zeiss called a “junker,” some passionate paraprofessionals and just enough funding to staff CAHOOTS 40 hours a week.

The fact is that the CNN article over-complexifies a fairly simple situation: one town got the fuck out of the way and found and funded some people who cared and wanted to solve the problem. That works; I know it does.

When people are talking about disbanding the police (are they still talking about that, or has that news-cycle been suborned yet?) they are not talking about having no social enforcement and support infrastructure. What they are talking about is understanding that police don’t deal with violent situations often – less than 5% of their calls – and the dispatch system needs a layer of nuance and an ability to dispatch non-police resources. The idea that a nasty form of anarchy will prevail is ridiculous: that’s not how humans want to live. It is in the political (and probably financial) interest of some to maintain police expenditures at their current level. Because, after all, the poor can go live under a bridge in Los Angeles, right?

It always paired one medic, usually a nurse or EMT, with a crisis responder trained in behavioral health. That holistic approach is core to its model

* (I don’t actually know what a “full court press” is)