If you have a nerdy person, or a philosopher, on your Annual Day of Shameless Commerce list, you may wish to consider this little-known masterpiece from the 70s. 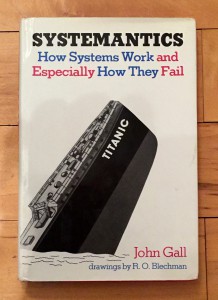 Really good satire is indistinguishable from its target – I think that’s the definition of “good satire”  Gall takes on General Systems Theory – a popular misconception from the 70’s that sprung out of the MacNamara DoD’s interest in the blatherings of RAND Corp megadeath consultants and early “quants.”

One thing a lot of people don’t know about is Amazon’s “collectible” books search feature. You can find pretty amazing vintage stuff periodically. One year I’m afraid I shifted the prices on “Systemantics” single-handed – it was about $10 a copy, now there appear to be various pricings for various printings.

The illustrations inside are appropriately quirky. The content is profound so, e.g:

Systems Get In The Way

The System Always Kicks Back

Systems Tend To Oppose Their Own Proper Functions

This is similar to the old UNIX programmer’s adage “Software tends to evolve to the point where it can send and receive email”  which I am sure Gall would accept as a general axiom of Systemantics.

Gall, in fact, has it covered:

I.e.: it sends and receives email.

Gall includes lots of theoretical-type footnotes and references, enough that if someone does not realize they are being trolled, they might actually feel they have stumbled on a masterpiece of analytic art. Perhaps they have.

The Fundamental Law of Administrative Workings:
Things are not what they are reported to be.

This axiom has been stated in various ways, all to the same effect. Standard formulations include the following:

The Real world is What is Reported to The System

If it isn’t Official, it Hasn’t Happened

I classify this as a “toilet tank book” – perfect for leaving in your special place, so you can study it during those fleeting moments of peace and quiet. Someone needs to write a version of this for the military, except Sun Tzu already did such a good job that niche is thoroughly filled.

PS – my “book recommendation policy” is in effect regarding this book.

Monday Meslier – 173: HOW THE UNION OF RELIGION AND POLITICS IS FATAL TO THE PEOPLE AND TO THE KINGS. » « My Book Recommendation Policy