Sam N, who you may have seen commenting here and there on FTB, has come out to the middle of noplace for a couple of days of slinging hot steel around. My posting schedule may be impacted, or it may not, I’m not sure.

Today was a bunch of organizing – what kind of knife is he trying to make and what kind of handle does it have? What is the overall strategy going to be? The plan is to do a 1095 block with 15N20 pin-stripes. That’s done by using 1/4″ slices of 1095 interspersed with 1/8″ slices of 15N20. It should look pretty snappy! He’s going to weld that up then cut it and stack it, then cut and stack that around some 1095 that will make up the edge. The bar will be cut into 2 pieces for a largeish chef’s knife and a paring knife.

Then over to the shop to get to know Mr Happy Dancing Bandsaw and the angle grinder family. Sam got to do his first MIG welds and a bunch of surface-grinding and then it was time to put the block in the forge and get it hot. I was having a case of the stupids and didn’t take nearly as many photos as I should have. 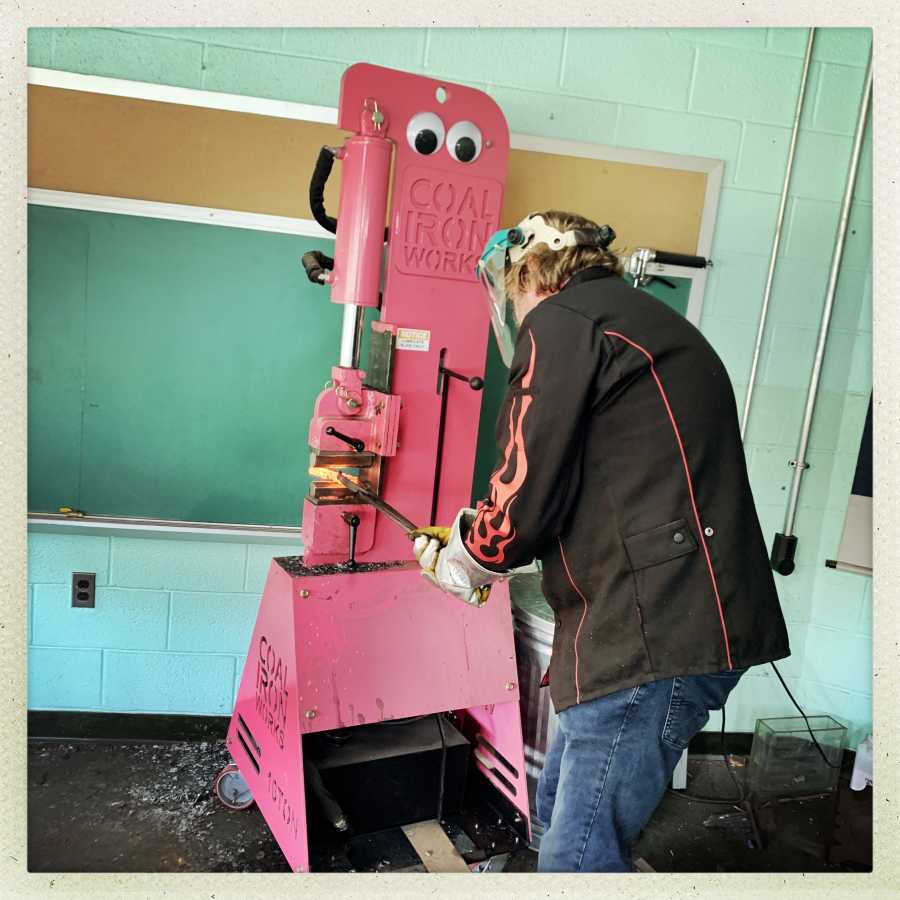 This time I hit upon an idea that I didn’t have when Q was here. I gave Sam some pieces of plywood about the size of his billet, that he could practice grabbing and squishing on the press. If you haven’t done it before, it’s hard to feel where the press grabs and how much hydraulic power squishes the metal how far. Plywood is a great simulator because you can take a 3/4″ thick piece of plywood and say “ok, turn this into a 1/2″ thick piece of plywood that is even along the top and bottom.”

So far so good! Now, Sam’s bar appears to have taken its welds perfectly, and is cooling in the annealing bin. Later tonight or tomorrow we’re going to saw it up and stack it and weld it again, then form it into a bar to forge the blades from. This whole process is mentally stressful for both of us – him because he’s learning and me because I’m trying to remember all the things I need to tell him before he tries something that might hurt him. For example, I noticed that he was approaching the forge with his foot leading, which positioned it to catch anything that fell from the tongs (i.e.: a piece of 2300F steel) – oh, yeah, I had to make a stern mental note to point that out next time the steel was in the oven and I wasn’t distracting him by yelling at him.

3 Strikes and You’re Far Out » « A Grafting Knife