There are so many options with these things, that it’s hard to know which way to go.

I have a piece of maple burl that I’ve cut so that it’ll fit into a poly jar that I can pour resin into without it leaking all over my countertop. 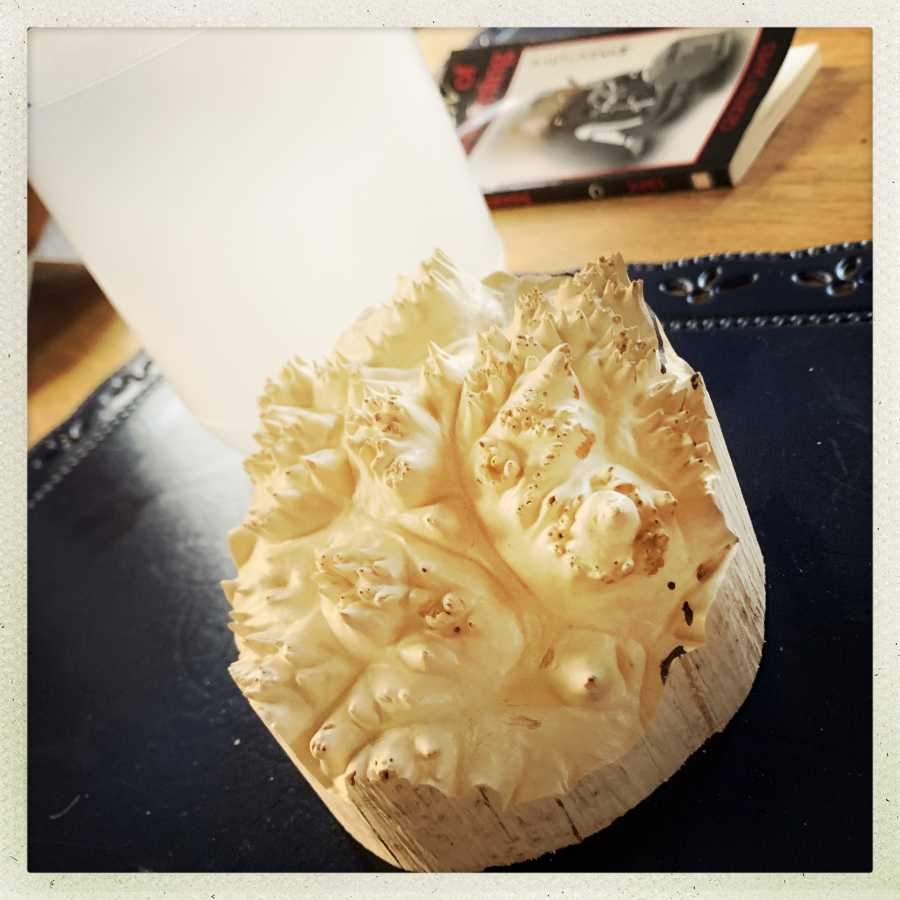 I have choices, and I’d appreciate your ideas or input.

When I did the “memories of ice crown” bog oak egg-thing, I did one pour of a distinctive color as a base, so I could tell where the bottom of the wood was going to be and aim my chisel there (also avoiding the screws holding the base to the chuck plate). I’ll do that here, but it could be clear or neutral color. So now we need to decide what goes over top of that, and up around the sides and surface of the wood.

I like the valley down the middle, it looks like some weird landscape from fractal-land. To bring that out it seems like I should pour a thin layer of color all over the thing (maybe) and then a thickened layer to run down the “valley.” The ice crown egg was done with white/pearl that I poured thinly all over, then added a small second pour of resin that was 90% cured so it didn’t flow so much. When you pour uncured resin on an object it thins and thins until you wind up with something that is basically translucent.

Then I have to think about the atmospheric layers. The ice crown egg had a clear atmospheric layer and a blue layer, which I poured and (slightly) mixed when the clear layer was 50% cured. I am thinking of doing that here, too.

Remember that, no matter what happens with the resin, the wood is going to have that creamy color in the final edges where the chisel exposes it. The top will hold the pigmented resin but the bottom will be that creamy wood color.

My thinking is to make it look like Dune, which has been done before, I admit. To do that, I’d do a thin layer of slightly red perhaps with pearl, then let that thin out and cure before adding a spot layer of darker reds to run down the valleys. Then a clear atmospheric layer that’s about 1/2 of the rest of the space, and a red-tinted atmospheric layer atop that, loosely stirred into the clear.

But there is so much potential for madness. I could blacken the wood and pour bright red resin to run down it. I could swirl the “sky” with holographic flake. I could try to make a thin atmospheric layer, swirl a teeny tiny itty bitty bit of pearl into it so it looks like desert winds, and then do a clear atmospheric layer followed by a colored one. I could just pour the whole thing with clear and otherwise leave it alone. Or I could pour a clear atmosphere layer and try to make a “whirlwind” by swirling a tiny amount of some other color into it when it’s half cured.

As far as shape, I can do roundish or egg-shaped or cylindrical – that’s all pretty easy.

What do you think? Just please bear in mind that there’s always a lot of change that occurs when even the best-laid plans encounter reality.

I keep thinking how fun it would be to take a piece of wood like this and turn a big recess in the bottom so I could run a chain of fairy lights/seed LEDs up and through holes in the surface. But, wood turners generally don’t do that. Why not? Well, there’s the problem that the lathe would shred the wires instantly. I’d need to build a sort of base-bottom with a well that I could seal the LED chain up in, then turn it carefully so as not to compromise the base, and then attach a separately-turned presentation base that contained more wires and a power switch. That’s not totally implausible, since I could cut the base-bottom recess on the Bridgeport mill – it’s just “another thing that can go wrong” and pretty bigly at that.

I also have a few more board-ends of bog oak like the one I did the ice crown egg with. Should I post some pictures of those?

Definitely a Bad Idea » « Worse Than a Kick In The Nuts