You may recall when a disturbed Trump fan sent a bunch of fake bombs to various media people and Trump critics. [stderr]

At the time I thought that was a Bad Idea and I still do. It makes “mad bombers” look silly and incompetent, for one thing. Americans need to remember that there was a time, fairly recently,  [stderr]

I’m not trying to minimize the bombings, but it’s not as though the bombers did anywhere near the damage that the police do in one month. That’s not to say that bombs are harmless, but they’re really not that effective unless you’re dropping B-52loads all over the place. They’re definitely a terror weapon (which is why the US drops B-52loads all over the place) and are not a generally accepted part of the political dialogue.

I do think it’s not unreasonable to remind the military police and cops in Washington, DC, that we also know how to make explosively formed penetrators and stuff like that, and if they continue to escalate and bring in armored vehicles they’re proposing to drive around in mobile deathtraps that are targets not scary. Cops in the US don’t know what the military in the US learned in Afghanistan and Iraq, namely that Humvees are a logistical drag in terms of force protection, not a solution to a tactical problem. None of this comes close to the strategic problem that the cops face, which is that they’re trapped, surrounded, and outnumbered by a population of 170+ million potential hostiles (who they seem dead set on pissing off) who sit across their supply lines. Apparently, as I write this, there are troops from the 82 airborne deployed to “outside of Washington” which I assume means Andrews Air Force Base – if we were dealing with a full-up insurgency, those guys’ shit would already be thoroughly on fire by now. They’d never make it far enough into Washington to get stuck in traffic, let alone cut apart with IEDs.

I’m not at all in favor of any of that stuff happening, and I hope it doesn’t. But Trump’s nobody’s idea of a strategic genius and has no idea how bad it can get.

What’s really bugging me right now, though, is the media’s usually incompetent reporting is continuing to serve the objectives of the police state. When Sayoc mailed his fake bombs, I immediately recognized them as harmless to anything but the target’s feelings. I.e.: 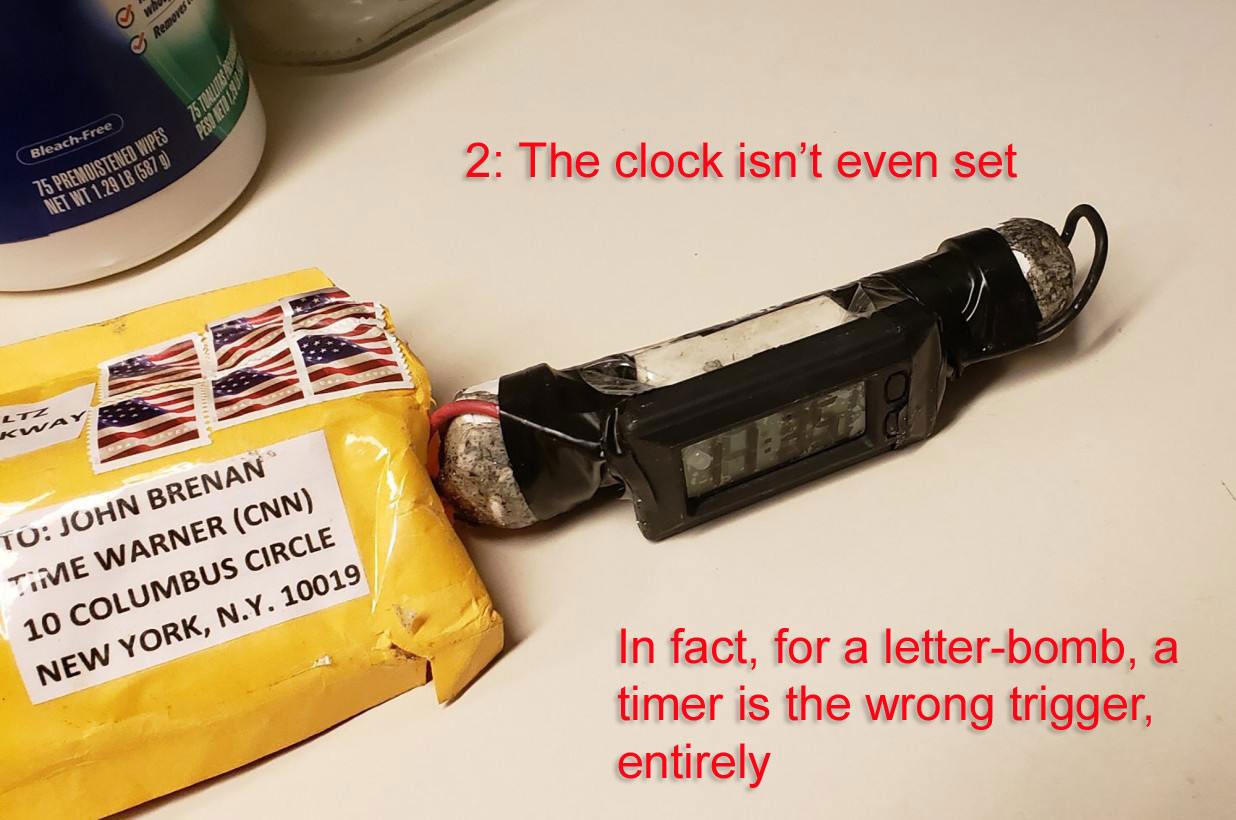 The media went along with the police state’s description of those as “bombs” until quite a ways into the news-cycle, then switched to referring to them as “weapons of mass destruction” or “apparent bomb.” For one extremely important thing, they ignored the FBI’s sordid history of creating would-be bombers, then arresting them when they attempt to obtain materials. In other words, they arrest the non-dangerous bombers who think that they can only get explosives on the “dark web” rather than WAL-MART and Amazon.com.

(CNN)Federal authorities have charged an Illinois man for civil disorder, carrying on a riot and possession of unregistered destructive devices associated with recent clashes between violent protesters and police in Minneapolis.

In videos allegedly posted to his Facebook account on May 29, Matthew Lee Rupert, 28, was seen passing out explosive devices to other rioters and encouraged them to throw the devices at law enforcement officers, according to the criminal complaint released Monday.

After handing an explosive device to another rioter and telling the person to throw it at police SWAT officers, the complaint states that Rupert is heard on video saying “He’s throwing my bombs,” adding, “He’s going to bomb the police with them.”

Sounds like someone is about to get a lesson in “what happens to you when you scare cops.” It’s not that the threat is necessarily real – after all, he was so stupid that he posted it to Facebook which is backended by the NSA and crawling with FBI agents. Note that the only person, so far, calling them “bombs” is poor stupid Matthew Rupert.

In a court appearance Monday, Rupert appeared to be incredulous at the charge he’s facing for possessing an explosive device.

“A firework?” Rupert responded to Chicago federal Judge Rebecca Pallmeyer, who had asked him to acknowledge the crime he was being accused of.

“You may disagree with it but this is what the charge says,” Pallmeyer said. 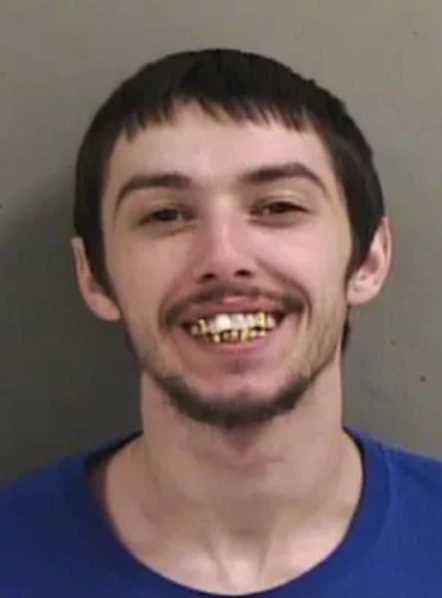 My advice to him is to smoke less meth

See how carefully the judge worded that? The guy is being charged for “possessing an explosive device” and the judge didn’t want to engage with the apparent fact that it was a firecracker or something like that. Throwing firecrackers at stressed-out violent cops in a confrontation is a really stupid idea, but a firework is not WMD. I know you know I’m generally unsympathetic toward cops, but if they want to pretend to be heroes they need to be able to pat out a petrol bomb “oh, I’m on fire” like the British occupation troops did all the time during “The Troubles.” Rupert is a damn fool, but he’s right to be a bit incredulous that they are treating a firework as if it’s Iraqi WMD.

The agent described the device as a “commercial item with a cylindrical container, hobby fuse and a main charge capable of exploding.”

It had a brown casing and a green wick, according to the affidavit, which does not refer to it as a “firework.”

You can refer to it obliquely as “Monique” but it’s still a firecracker.

I’ve done a bunch of searching around for pictures of the alleged explosive devices and, strangely, there aren’t any on the web. Normally, cops like to post a big intimidating picture when they score a weapons-haul, but I guess it would be too embarrassing to post a picture of a bunch of fireworks. Everyplace I searched was careful to play along with the party line and describe the devices as “explosives” or “explosive devices” or “unregistered explosives” (nobody registers firecrackers!)

Rioters call in “air strikes” with cluster munitions: [see, I can do media, too!]

What I’m getting at, here, is that the supposedly “liberal” media aren’t – they are entirely swallowing and repeating the line from the authorities. 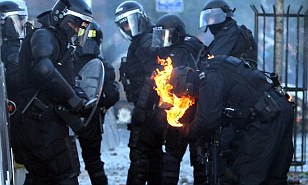 Those fireworks look almost festive. In France they throw cobblestones, which are large and heavy enough to break bones or cause a concussion. In Belfast they light cops on fire with gasoline bombs, which is Irish courtesy against the cool night air. In Afghanistan they drive a truck full of military explosives into you, if you cluster up like American cops do, and the road is scattered with body-parts – both sides of the conflict together forever thanks to the power of high explosive.

So far, the scariest thing I think I’ve heard of is the imbeciles in an unarmed military helicopter that flew low and close to protesters in a city to blast them with rotor-wash. Air currents in cities are weird and unless the pilot had practice doing that sort of thing in, say, Mogadishu, they should have known better. Dropping a flaming helicopter-wreck on protestors would have certainly dispersed them, but the next night you betcha someone would be carrying something that could severely damage a helicopter. It’s really depressing how stupid American militarized cops are; they’re looking at the potential beginning of an insurrection and they’re treating it like a coffee and donuts run – they’re whining a lot but they are basically acting like chucklefucks. Elsewhere, I saw footage of a cluster of cops milling around in an intersection, and their situation awareness was so poor that someone managed to sneak up on them in an SUV going about 40mph and rammed right through them. That guy’s probably going to be charged with driving a “suicide van with explosives” if there was anything combustible in that vehicle, at all.

The media needs to cover this stuff with a bit more healthy skepticism, and not just re-print press releases from the FBI’s media office. [By the way, if you don’t believe me, do your own research: search up this topic and note how similar the reporting is. Some media outlets directly print press releases as “news.”]

The timing of Sayoc’s fake bombs was personally awkward for me. I had just finished making a bunch of soap molds that look like blocks of C-4 plastic explosive. My idea was to make an almond oil soap with a slightly almondy scent then zip-tie a battery pack and fake timer (you can get boards on amazon.com that will blink an LED for $9) and detonator, then send them to a few of my friends. In retrospect that also probably was not such a great idea. I mean, I’m confident in my friends and I know that anyone who got a box from me would probably assume it was soap and not C-4, but I don’t want anyone posting “look what Marcus sent me!” on Instagram. Um… Does anyone want some highly unique soap molds? Or, if you prefer, jell-o molds? Some ideas, you just gotta let them die on the vine once you discover they’re not as funny as you maybe thought.

Immoral Christianity: 2 – Inherited Blame » « What Should I Do?