Have you seen gun nuts sporting a patch that reads “RWDS”? It stands for Right Wing Death Squad.

Personally, I bet those clowns would urinate and run if confronted by comparable force; usually fascists like to make sure that they have overwhelming force on their side before they start anything. But, start things they will, if they have the opportunity to attack, maim, and wound people weaker than they are. Recent events in the US have made me begin to re-assess my stance on guns; I’ve been wondering if I should re-zero my rifles and make and age a ghillie suit – if the KKK starts marching openly around here, someone needs to keep an eye on them. I was not in Germany in the 1930s, obviously, but I imagine this is what it felt like: the air seems to be heavy with threat. But I think that the fascists are mostly bluster, unless we reveal ourselves to be weak. Have you noticed that their operating assumption is that decent people will just roll over? Fascists are really stupid. But stupid is dangerous; “ignorance is strength” and all that.

The Tactical! spammers sent me this, and it bothers me. 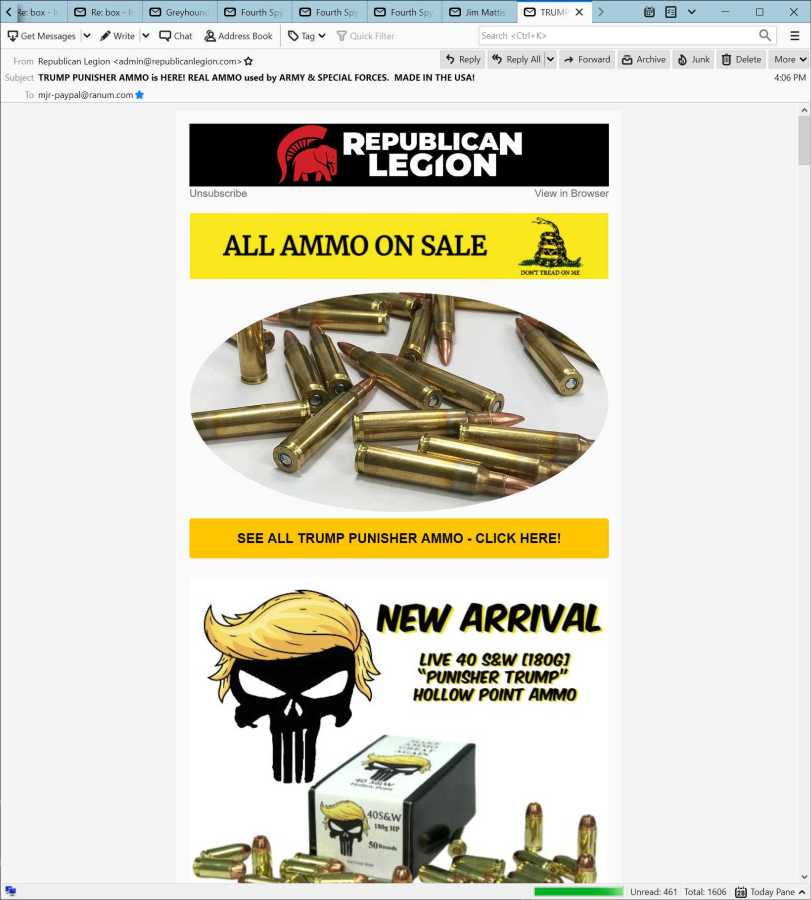 “Ammo used by the army and special forces” my ass. I mean, they use ammo. Lots of it. But military stuff comes in waterproof plastic packs that are quite utilitarian.

What blows my mind is the cognitive dissonance of Donald Trump as the punisher. First off, any of us could whip that bloated milkshake’s ass with one hand, even if his bone spurs weren’t acting up on the day of battle. He’d be more likely to cry and die of a heart attack trying to run from conflict – this is a guy whose ass was thoroughly pwn’d by a 17 year-old Swedish girl, who is stronger, faster, and way smarter than him. So what does it say about what’s going on in the wanna-be-RWDS’ mind that they think of Trump as a mighty bringer of fight?

My theory is that they don’t know what a fight is, so they mistake all that comic-opera tactical gear for strength. Unfortunately, that doesn’t mean they won’t feel empowered to start trouble. Quite the opposite, in fact. When Dylan said “A hard rain’s a gonna fall” he didn’t have to add that some people don’t have the sense to come in out of the weather.

One other thing that bothers me, a lot: the fascists have been claiming that walking around with a rifle is “peaceful protest.” No, it’s not. Peaceful protesters don’t carry weapons. The purpose of the weapon is that it’s a threat. The media are being fucking idiots propagating the “peaceful protest” meme by not calling it out for what it is. Let me clarify the dynamic: 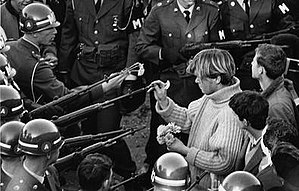 That is a peaceful protest. There are people with weapons, being threatening (that’s what they are for, after all) and there’s a peaceful protester with flowers. In case any “journalists” are reading this, now you understand and can go forth and explain it to your audience.

This Would Make a Great “Nightmare Disaster” Movie » « Swamp Dwellers