I am an equal opportunity hater. One of the big mistakes the republicans make is the assumption that you must like whoever is opposed to whatever you hate; i.e.: if you loathe Trump you must like Biden. In fact, my hatred for them is at nearly an equal level, although I admit Trump’s phony revival preacher drawl makes me hate him just a little bit more.

The problem with the American political system is that it’s utterly hateful, top to bottom, in nearly all ways. I see a few rays of sunshine, like Rasheeda Tlaib (brilliant!), Ilhan Omar (such a nice smile! and so poised) and Alexandria Occasio-Cortez (if we have a future, she’s it) – but I wonder if anyone can survive in such a toxic and corrupting environment without eventually succumbing to its many temptations. I suspect that there are many who try to be decent human beings while they are in office, but as soon as they leave they are bombarded with offers to join the corrupt-a-thon of talking heads, consultants, and influencers.

The worst part of all of it, to me, is that it’s been made legal-but-regulated, which effectively gives people permission to engage in things that ought to strike any moral being as exceptionally skeevy. So, for example, the “revolving door” is regulated – you’re not allowed to turn around, become a lobbyist, and represent your new company to your old co-workers. Not without a cool-off period. But, since everyone knows the cool-off period, they can already be planning all the corrupt deals, book deals, board seats, etc. – it gives the newly unemployed politician something to do between rounds of golf and expense account dinners. 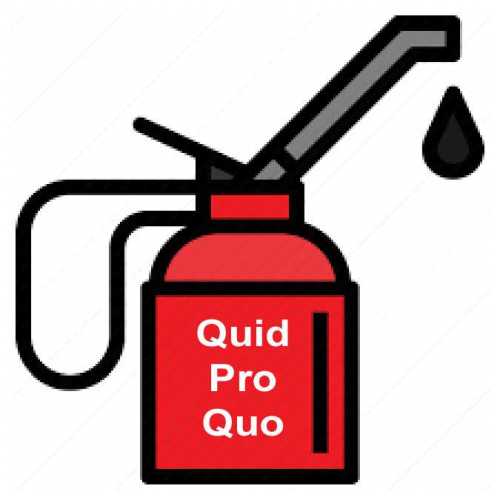 Just a squirt, keeps everything moving

But if it’s corrupt for Hunter Biden to take a “job” for $50,000/month sitting on the board of a foreign company, isn’t it also corrupt for some Washington insider to do the same thing? John Bolton rather obviously still has some of his old contacts, and they’ll take his calls – so that makes him a valuable person to have on board in case some procurement fewmet gets jammed in the pipeline and needs a bit of the ole quid pro quo juice. Sometimes, as we’ve seen, it just takes a phone call to release millions of dollars of delicious corruption crunch. The reason we think it corrupt for Hunter Biden to take a job he’ll never do, and is not qualified for, in return for possibly talking to daddy someday, is because it embeds the assumption that the organization Biden’s working for is willing to cut a few corners if need be, and Biden’s willing to help so he can ‘earn’ his measly $50,000/month. You can bet your ass that a Russian gas oligarch wouldn’t give Hunter Biden the time of day, assuming Hunter Biden blundered through his security cordon trying to find the rest room. These people ought to disgust us because it’s transparently obvious that they’re trading on eachothers’ connections, and none of them can be trusted farther than you can comfortably spit a live rat.

Although, when it comes to Trump and his coterie, the spitting is going the other way. See if you can wrap your mind around this: Lev Parnas feels betrayed by Donald Trump. That means he has to have been able to convince himself that he was, once, somebody to Donald Trump. In fact, he signified less to Donald Trump than a piece of toilet paper stuck to the bottom of his shoe. That should have been obvious. These are all profoundly stupid people, in addition to being corrupt.

Which brings me to a recent profoundly stupid and corrupt person in the news. [po]

Former Defense Secretary Jim Mattis is rejoining the General Dynamics board of directors, the contractor announced Wednesday, the latest in the retired Marine general’s moves to re-enter the world he left when he became the head of the Pentagon more than two years ago.

Could you reach over and hit the “silence” button on that corruption alarm? It’s ringing so hard it hurts my ears. I wonder if he took a pay cut because he left the administration with a boot-print on his ass?

Nope. According to the Project On Government Oversight:

As a board member he received almost $1 million in compensation from 2013 to 2016. According to the company’s 2016 proxy statement, his brother is an employee of a subsidiary of the company. In 2019, he was re-elected to the board. 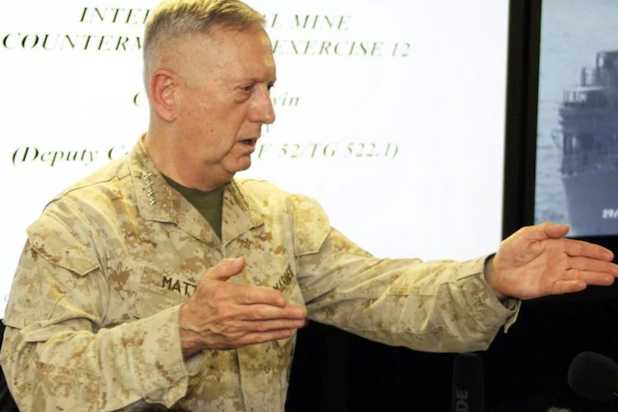 Imagine what a message that sends to the hard-working General Dynamics employee, who does their job for the company, builds skills and seniority, and – after decades of hard work – they’re getting paid a rounding error in the salary of an incompetent with a track-record of non-accomplishment? How does that feel? Wouldn’t you want to just shank the guy in the hallway if you bumped into him? Well, that’s not going to happen because he’ll probably never show up in any hallway where there are actual employees. He’s also a top-notch investor:

See, these corrupt assclowns don’t just get their finger in one pie; they get great big fistfuls of all the pie that goes past.

I just picked Mattis practically at random. There are so many. Basically, every asshole who’s ever worked in Washington has matriculated and gotten a job on some board of directors for some beltway bandit. The kind of money they are pulling down is in the Hunter Biden range. I remember when Mike McConnell left the NSA and went to Booz Allen Hamilton, walking into a partner-level title there, instantly. Being a partner means profit-sharing; a couple million bucks a year just to be prepared to maybe call someone up and apply a little squirt of quid pro quo.

Pick some random Washington asshole and punch them into Google, adding “board of directors” and see what I’m talking about. Just for giggles I tried David “lose in Iraq and Afghanistan” Petraeus: [optiv]

So he’s probably not getting $50,000/month – maybe $150.000/year – but if that company gets acquired or goes public, he’ll have a couple million dollars in shares to dispose of. Shares that would be “incentive stock options” to encourage employees for their hard work. Hard work that former General Petraeus won’t be doing. Petraeus is also a member of the board of KKR and of course he collects his 4-star general’s pension of $208,000/year. That ought to make the cannon-fodder happy, to know they were busy humping packs and dodging IEDs while the guy who helped oversee their losing the war is sitting back with his hand in a whole lotta pies. Petraeus also took a couple teaching gigs:

Petraeus appears to have learned recently after taking a six-figure annual salary to teach a weekly seminar at the City University of New York’s Macaulay Honors College. After Gawker reported on July 1 that Petraeus had initially been offered a $200,000 salary (apparently later changed to $150,000), a controversy ensued, with city and state officials criticizing the high pay.

Any of you who are reading this, who might be adjunct professors, you’ll be happy to know that Petraeus actually landed two teaching gigs in that price range. That’s pretty good for a 3-hour course with assistants and research assistants to do the grading and, uh, teachy part. I’m genuinely perplexed what Petraeus might teach.

I don’t even want to total it up, and I’m sure that’s just the tip of the iceberg. I don’t know what being a partner at KKR pays (again, it’s profit-sharing) but it’s got to be substantial. Oh, the corruption! [nyt]

Mr. Petraeus joined KKR in May 2013, six months after leaving the C.I.A., at the urging of Mr. Kravis. Within the firm, Mr. Petraeus runs what is described as a small research division, the “KKR Global Institute,” which analyzes public policy and strategic risks and advises the firm on investment decisions, colleagues said.

Somewhere, Hunter Biden is crying into his latte, realizing how cheaply he sold himself.

Petraeus, like most other washed-up hasbeens (including. I suppose, your host) also charges per speech or public appearance. I’m not going to search the speakers’ bureaus for Petraeus but someone like him usually gets $50,000-$75,000 for a talk, which consists of reading a speech, eating a dinner, and getting handed a gym bag of money to put in your offshore account (if you do it Bill Clinton Style) or getting a check, depositing it, and paying taxes on it like a normal person. The amount on the check’s what’s not normal.

When Sidney E. Goodfriend, a retired Merrill Lynch investment banker who founded an organization to mentor veterans, wanted Mr. Clinton to film a public service announcement for the group, he talked his way into a meeting with the former president by promising to bring Mr. Petraeus. Mr. Clinton filmed the spot.

“It wouldn’t have happened without David,” Mr. Goodfriend said.

In Kazakhstan, Mr. Petraeus accompanied Mr. Kravis, who addressed graduate business students at Nazarbayev University, an event the school’s website said was “attended by a host of Kazakhstan’s ‘Who’s Who’ in finance, banking and policy making.”

That’s the rarefied world of pay for access/retired ex-policy-maker influence. You make a phone call, squirt some quid pro quo, and things break free and happen. Or, if you’re Donald Trump, you hire troglodytes like Giuliani and Parnas. Trump’s mistake is that he consistently favors the cheap shit.

After Petraeus showed up, my life and the life of every soldier under his command went to complete shit. Back then, the ever-calculating Petraeus, who had married the West Point superintendent’s daughter after graduating, was on his way up. The general’s star was within reach – he was only one rank away – and being in command of the “Devil Brigade” (our brigade), was absolutely vital to getting him there. During his tenure with the 504th, he had to kiss and lick as many hairy, hemorrhoidal assholes as possible. He had to guffaw and slap all the right backs; he had to seriously impress. He had to do whatever was necessary to reach the pinnacle. No bridge too far for that son of a bitch. Can do. Will do. Yes sir, whatever you want, sir.

Petraeus is famous for writing the army’s COIN (counter-insurgency) manual. What’s really sad about that, to those of us who follow COIN and military theories, is Petraeus basically lifted the whole thing from a French/Algerian theorist from the 40s. If you’re remotely interested in this stuff, you must read Adam Curtis’ piece on counter-insurgency poseurs: [ac] Basically, counter-insurgency doesn’t work, but there are always new assholes coming along and re-inventing “hearts and minds” and “clear and hold” (techniques invented by the Mongols and Romans) and re-branding them. That Petraeus’ reputation is for re-inventing basic COIN ideas tells you how devoid of basic ideas the pentagon is.

They’re Waiting For An Excuse » « Inevitably: My Thoughts on Biden