When you’re a blogger, you wind up collecting ideas and sitting them on a shelf, “use this one if you need a hook to talk about art” or “oh, look, cops lying again!” This posting is going to give me a chance to dredge out a bit of wonderfulness that I should have shared with you all a lot sooner.

Being the horrible cynic that I am, I must couple all wonderfulness with dreadfulness, so the world does not spin out of balance on its axle.

As someone who enjoys building things, I cannot imagine how incredibly awesome it must be to be part of building a nuclear aircraft carrier. I have a friend who works at Newport News, who says that the facility there is amazing (I need to go visit someday!) – if you want to get an idea of what building a modern military ship is like, read The Yard [wc]; it’s about building an Arleigh Burke-class destroyer, which is a much smaller ship than an aircraft carrier.

The new US Gerald Ford class aircraft carriers are aircraft carriers designed to project American power and glory for the 21st century. So far, they are a failure. The first of the class has had notoriously inoperable launch catapults and utility elevators; they are so bad that the navy has resorted to rotating armies of contractors though the problem, hoping that someone will be able to get everything working.

Everything points toward the same procurement problem as the F-35: you start building it (and paying for it!) before it works, with a plan to eventually get everything fully operational a year or two after the ship was declared “operational” for budgetary reasons. “Is that ship ‘operational’ or operational?” “Sir, it’s ‘double plus secret handshake operational.” What does that mean, it floats? So, while the first one, the Gerald Ford is a floating construction-zone in progress, the navy’s imperial requirements are to have nearly a dozen such ships. The only way to get there is to be constructing the next boondoggle while the previous boondoggle is still being shaken out. There’s no way that’s good, because if the builders manage to learn something in the course of getting the Gerald Ford operational, they’ve just built a new ship with the old problem and are going to have to immediately retro-fit it with the new solution.

Imagine if you bought a new operating system and the first thing it did, upon being installed, was to re-install itself with gigabytes of patches? Oh, wait, that’s not the best example is it.

The John F Kennedy has been floated. It’s not a usable aircraft carrier, yet, but some major milestones have to be accomplished while the ship is floating (I assume that has something to do with balance): [bi] Plus, December 7!

The navy appears to have gotten an amateur graphic designer, perhaps some flag officer’s geeky nephew who has a few months’ experience with Illustrator, to make a logo for the ship: 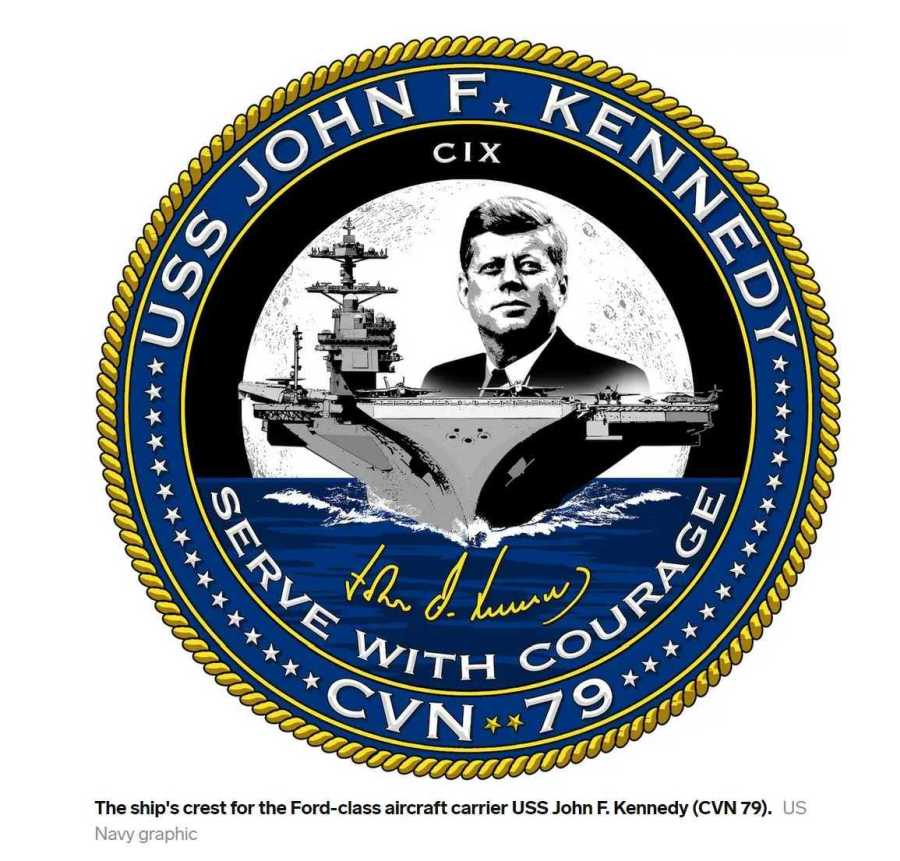 Perhaps it is also a work-in-progress and they plan to pare it down, clean it up graphically, and ditch the overuse of bitmaps.

Let me show you how this is done, people. A while back, our own Great American Satan [gas] had an opening to do some graphic design, so I decided to support their work by commissioning a logo for my non-existent ship (being non-existent, it is slightly more battle-worthy than the John F. Kennedy. If you recall, I have spent a great deal of time playing Elite:Dangerous and did some pretty hardcore exploring back before I quit. The role-play aspects of that game were one of my favorite parts (role-play being necessary because otherwise there was not much to the game except space trucking with great graphics) – my explorer-ship, the M/V Longshot, was a legend in my own mind, having gone to the galactic core twice: once out of curiousity, the second time hauling a jerry-can of fuel to someone who had forgotten to top up their tank. Longshot found a bunch of earth-like worlds, found supermassive black holes, and generally collected a great deal of wear and tear. 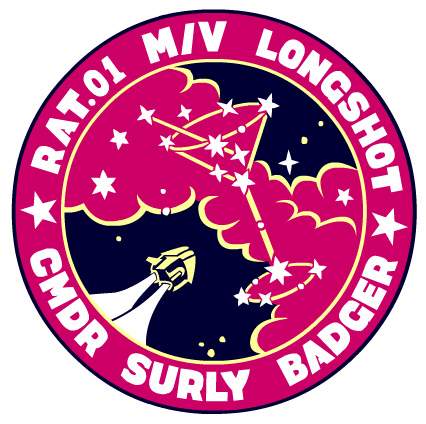 Sorry, US Navy, mine is so much better. Maybe you should hire a real graphic designer.

There are companies on the internets that will go from vectors to actual object in a few days, so I had some patches made and one of them is now stuck on my Fuel Rats flight suit, hanging up in my closet. For a while I was swapping emails with some of the old Fuel Rats and we were thinking of starting a tradition of swapping ship patches, like calling cards. I had a batch made in flexible 3D PVC like all the other Fuel Rats tchotchkes. [linxcorp] But, I’ve sort of fallen out of the Elite: Dangerous scene and have stopped going to the conferences, etc. Mostly because I hate travel. If any of you feel a burning need to have a Longshot patch, contact me with an address and I’ll send you one for your curio shelf. I expect a flood of requests from envious crewmembers of supercarriers. 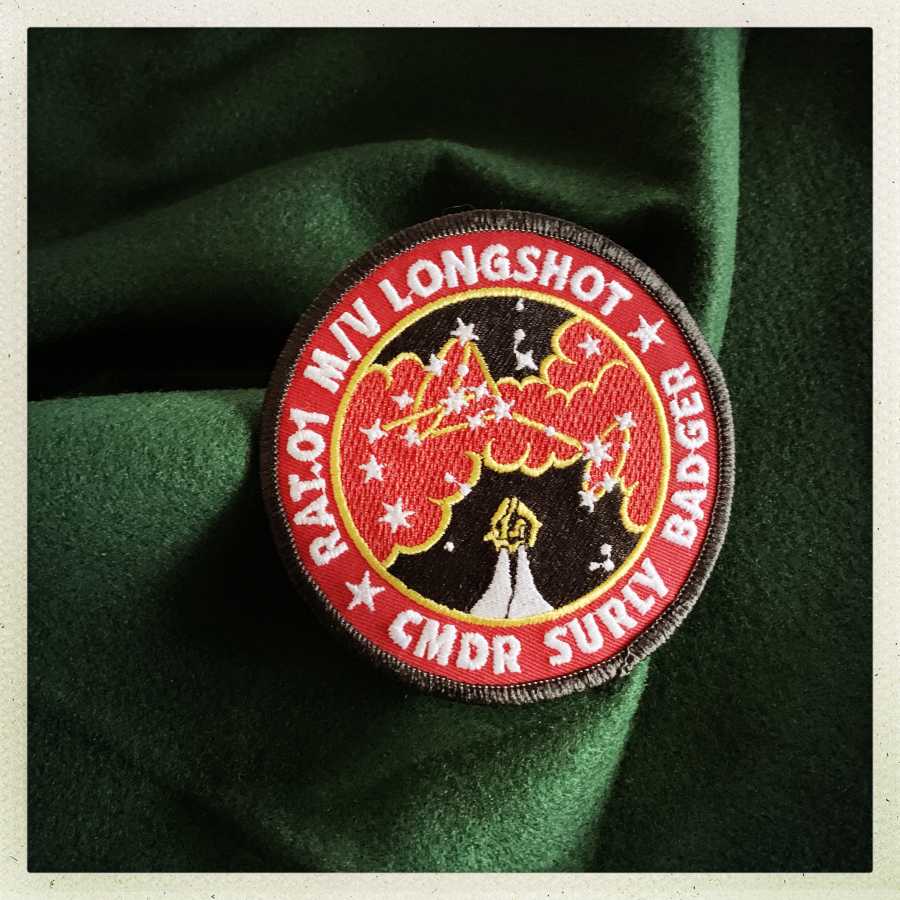 Because I am a super-duper patriotic team player, I did a little graphic design update on the John F Kennedy‘s ship patch, gratis. What do you think, US Navy? 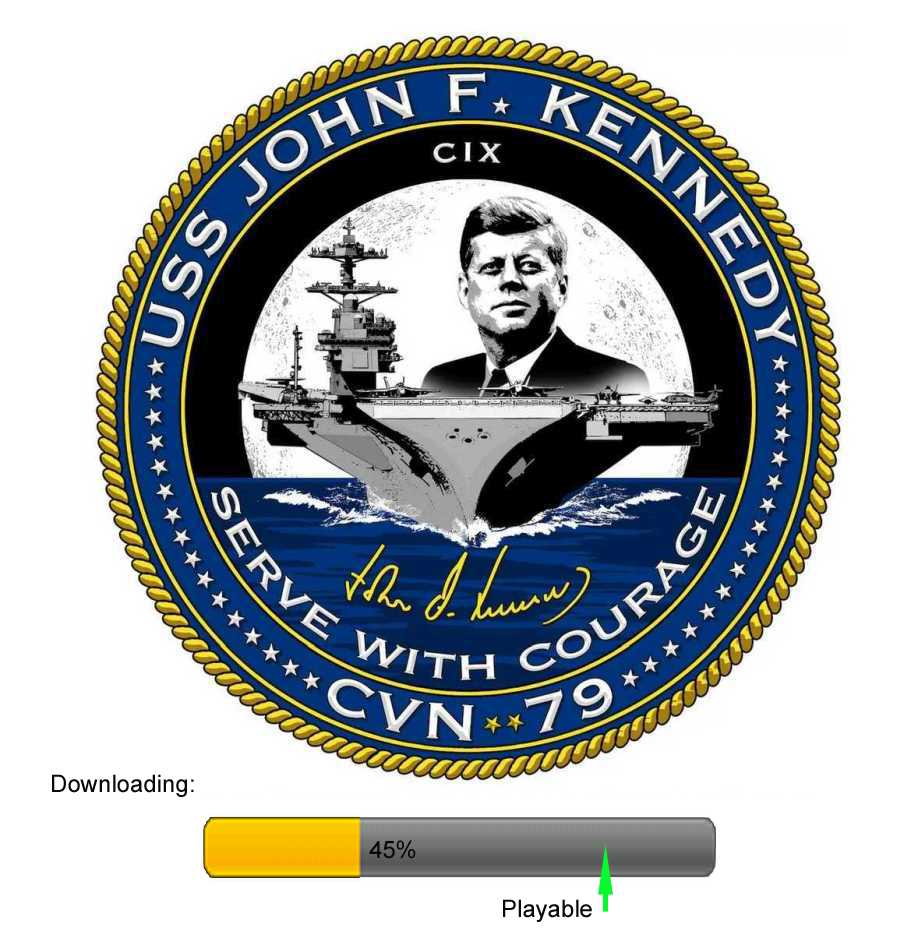 NPR on the launch of the John F Kennedy: [npr]

Hicks says there are about 5,000 shipyard employees working on the ship now, but that about 10,000 people have worked on the ship over the life of the project. The Kennedy represents about 55 million human working hours, according to Hicks.

Oh Look! It’s Another Near-Sea-Level Base! » « A Totalitarian Playground