I gotta hand it to Greta Thunberg – she has found herself thrust onto the big stage, and is making the best of her 15 minutes of fame. 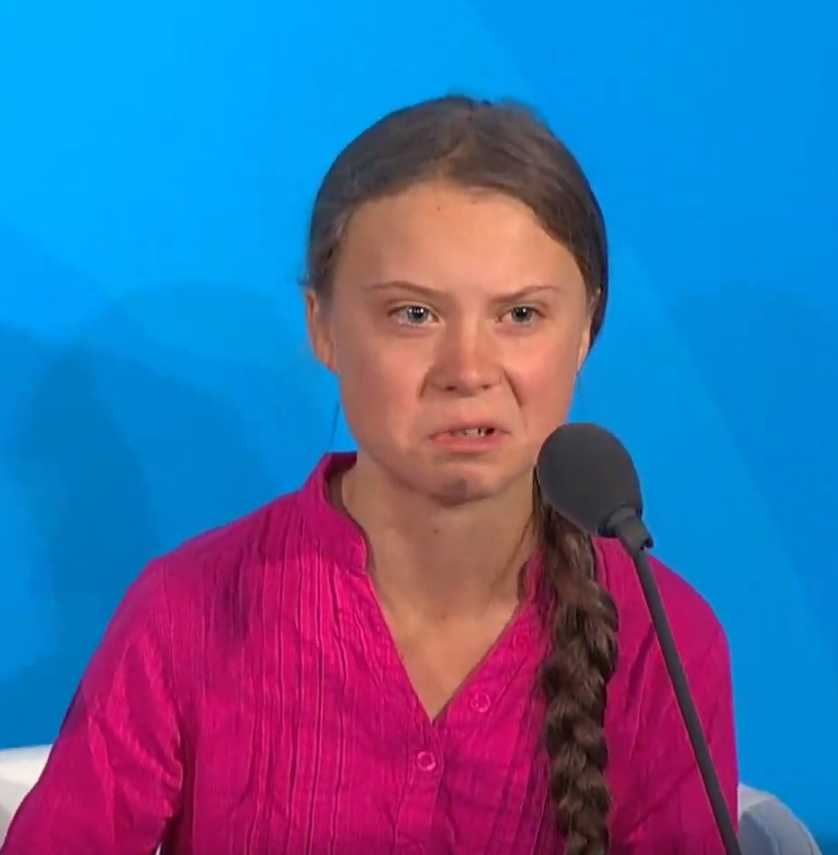 contempt and disgust are appropriate

My message is that “we’ll be watching you.”

This is all wrong. I shouldn’t be up here. I should be back at school, on the other side of the ocean. Yet you come to us young people for hope!

You have stolen my dreams and my childhood with your empty words, and yet I am one of the lucky ones. People are suffering, people are dying, entire ecosystems are collapsing – are we in the beginning of a mass extinction and all you can talk about is the money and fairytales of eternal economic growth.

For more than thirty years the science has been crystal clear. How dare you continue to look away and come here, saying you are doing enough.

I would describe her earlier congressional testimony as “casting pearls before swine” except swine really aren’t anywhere near as bad as the US’ congress. She pointed out, correctly, that congress should not listen to her – they should read the IPCC report and listen to the scientists.

Thunberg put her finger right on one of the key drivers of the problem: the fairytale of eternal economic growth. Many of us mistake that problem as a problem with capitalism, but really it’s more of a malthusian dynamic than that: you simply cannot and should not assume that population and industrialization can ramp indefinitely. Usually when I say something like that, someone will swan in and declare that Malthus was wrong and that we can handle a much larger population, if we’re smart about it and use resources wisely, etc. But the problem with that is that the larger your population is, the more damaging it’s going to be when something goes wrong and breaks those assumptions. I’m speaking here from my history as a descendant of Irish migrants who fled to the US because there was too much dependence on the potato. Potatoes were what brought my Norwegian ancestors over, too. Potatoes were a miracle food at the time and allowed some parts of the planet to expand their carrying capacity. not accounting for what might happen if the carrying capacity suddenly dipped because of British greed and airbone fungus. We can grow the population much larger than it is, sure, but what are the failure modes when the feedback loops get tighter and tighter. During WWII, the Bengal Famine [wik] was not a result of a drought (as it has been whitewashed to be) but rather a supply-chain management problem where the British thought they’d do well to hedge their bets against a nazi blockade by taking Bengal’s rice crop. 2.1 million people died of hunger, probably not realizing that it was Winston Churchill who had knifed them. As the population goes up, the catastrophic results of that sort of hiccup goes up, too.

The other piece of the puzzle Thunberg did not finger was nationalism. The current nationalist system is a web of self-interest between fictional entities that makes it impossible for them to operate cooperatively. In other words, Thunberg’s issue with the august body that she was addressing is: that it exists. Capitalism and nationalism (which are tied together to form the “American Dream”) work to prevent cooperative decisions because capitalism depends on there being inequality in decisions (aka: the profit margin) and nations exist based on that profit margin, too. She’s asking those people to put themselves out of a job, which is clearly something they are incapable of doing because otherwise they never would have taken that job in the first place.

The “Orcish” Slojd » « The Plan All Along