There’s a smith on instagram who does these lovely scandinavian-style carving knives; it inspired me to try my own hand at a few.

The grind is called variously a flat grind, or a “scandi” grind (short for “scandinavian” I suppose) – it’s actually a very simple grind that depends on a precise angle and letting the thickness of the blade do the rest.

Matt White’s page is [instagram] and his work is simple, fine, and elegant. He’s working this design because he’s searching for constant refinement of his process, so he can achieve excellence and make his clients happy. I doubt he’d mind if I post a shot he already posted of some of his blades. And I totally won’t blame you at all if you say “his are so much better than yours, Marcus.” Because that’s kind of the point of this posting. 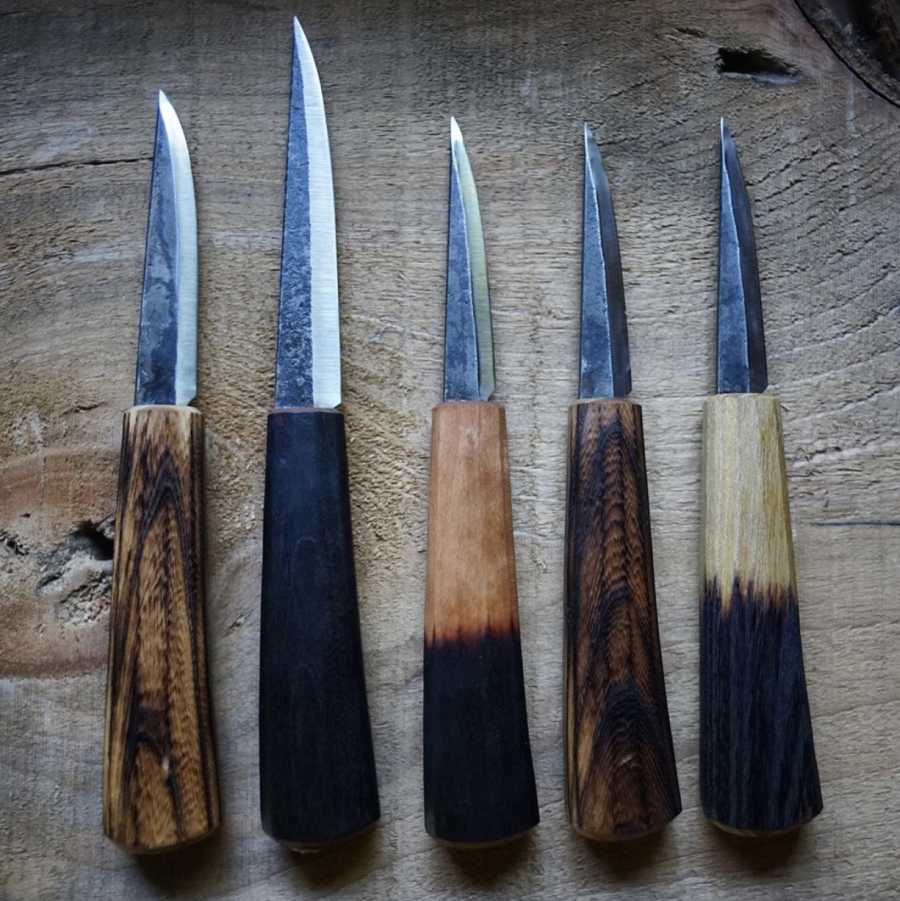 He has a unique and striking form of scabbard that he makes, too. Go check his work out (it’s also pretty affordable!) I would bet that those would just fine for purposes other than carving; you could cut steak, shank congressmen, or open letters with one.

Anyway, I’ve done several slojd-style mini-blades since I stumbled across his work, though I’ve added my own interpretation because I’m not fond of scandi-grinds. That grind produces a thin tip that is good for carving but it also wants to snap off under stress. I prefer to grind so the grind-line follows the edge not the back, which results in a sort of a mini-katana grind; essentially the blade is an O-kissaki (long-tip) with no blade body. 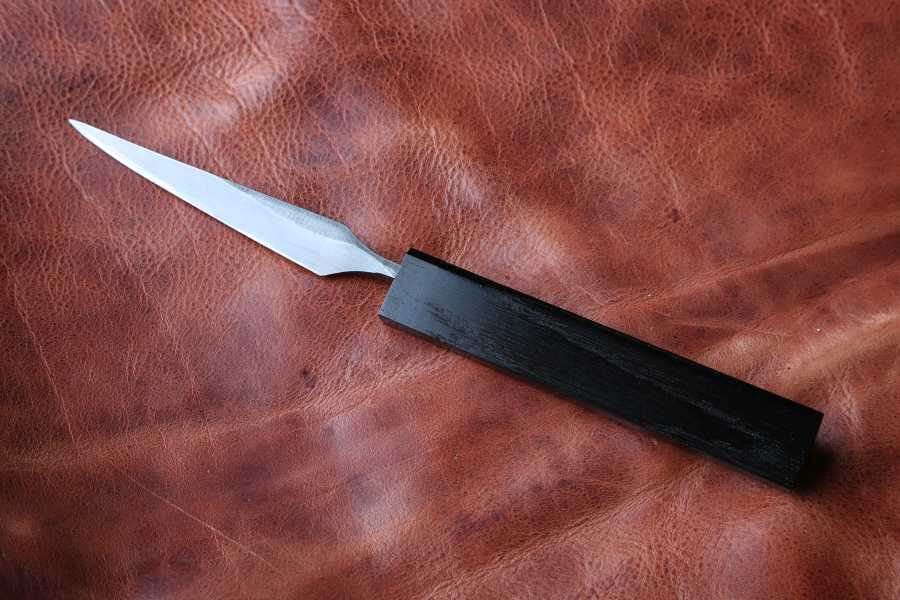 Another thing I have been experimenting with is taking wire rope damascus once it’s welded up and smashing it down vertically instead of drawing it out horizontally. In the horizontal draw, you see the outlines of the sides of the wires – in the vertical draw you get the outlines of the wire ends. It’s pretty cool-looking. But, let me tell you: smashing a hydraulic press down onto a piece of damascus you made is stressful – you really want your welds to hold or the whole thing might split into chunks of unusable stuff. So, it’s a good way of testing your welds.

It’s also a good way of testing your handles, because you’re not using very much wood. That’s a cut-off scrap of ebony on the bolster, and a cut-off scrap of 7000 year-old bog oak on the handle. This is also an exercise because there isn’t much wood comprising the handle; you have to be careful not to grind down through the wood and hit the epoxy-filled hole where the tang is. After I did the coffin-handled cooking knife for Gary, I decided that I liked the big planes of wood and I’d explore doing a few angular handles. Angular handles are hard because, even though you’re working on a belt sander with a flat platen, you have to keep those surfaces where you want them and keep them steady because the slightest bit off is very obvious. Our eyes are more forgiving of curves.

That’s a pretty skinny-looking tang, isn’t it? And the blade might look fragile. It’s not. Steel is really, really strong. I made a test blade like the one above, tempered it, and hammered it through a 2×4 with my forging hammer. It took two strikes and I pulled it out and it was just fine in spite of the fact I had just given the thin-looking tang a great big whacking.

I’ve done another experiment in this line, and another eye-gouger for Jazzlet, both from vertical-forged cable. I’ll post those eventually. Usually I wait until a blade has gotten to its long-time home before I post pictures because I hope it’s a pleasant surprise for them. (Although years ago I sent someone a knife, unannounced, and they jammed their hand into the box and discovered it had come a bit unwrapped. Now, I wrap everything in heavy felt, which is pretty tear-resistant. If you ever get a box from me and there something wrapped in felt in it, open it carefully!)

Not The Congressional Action on Guns That You’d Expect » « Fuck, Yeah!