This is a set of photos taken over the course of about 1 month of real-time.

One of the molds I sent Gilliel was a sort of multi-faceted fake rock. She stuffed the mold with USB fairy lights (one of my favorite things!) and gold leaf (another!) and filled it with red resin – then sent me the result. I decided to do my own version, which was a bit more over the top. It just happened that I have a couple of large quartz spear chunks. 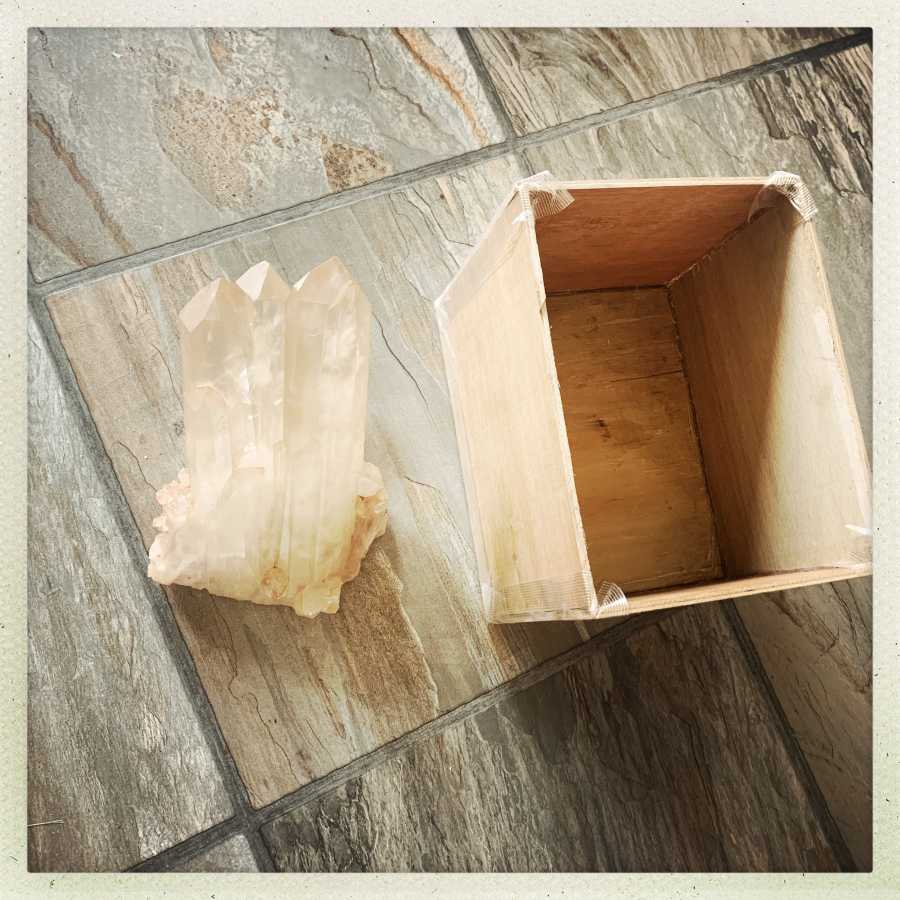 The box is a quick and dirty mold box made from scraps I cut on the table-saw. Old school mold-makers like Adam Savage use hot glue guns to assemble this sort of box, and I guess they are good enough with the hot glue guns to make a liquid-tight seal. I’m not that good so I reinforce the seams with strapping tape. There are two reasons: 1) having silicone leak all over your floor is expensive and sucks, 2) the silicone and the object are heavy. A fair amount of pressure is going to be on the corner-joints and the deeper the mold gets the more weight will bear down on them. When I am doing a mold box, I don’t worry much if there’s only a cup or so of silicone, but this is going to take almost a gallon, which is $150 worth of silicone and a tremendous potential mess. 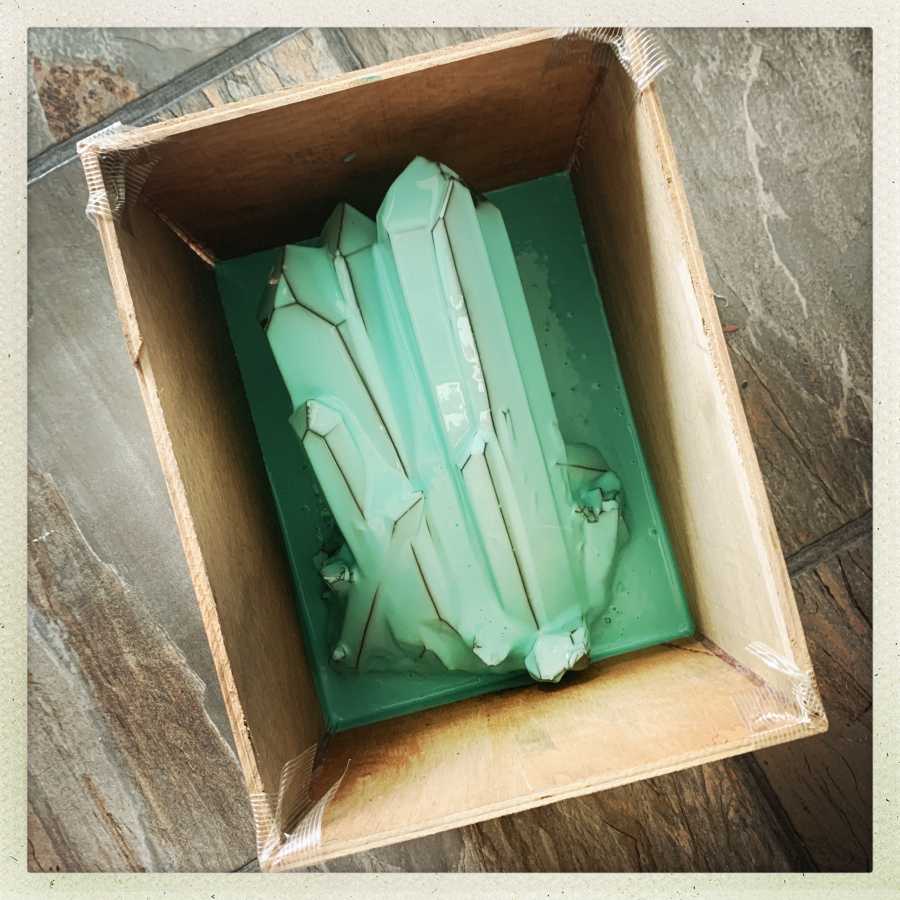 One of the tricks I’ve learned is to do a thin pour and pop the bubbles with a bamboo chopstick, to keep the mold from having voids up against the object. Here, I did an initial pour of about 2 cups of silicone and let it sit for about 15 minutes. Another way of doing this is to use a brush and brush the silicone onto the surface of the object, then put it in the box.

It’s nice when you’re dealing with rock, because it won’t float up to the surface of the silicone. You need to be careful with any object lighter than the equivalent amount of silicone (Archimedes, FTW!) because if it floats up, you have a ruined mold – getting the object stuck down onto some kind of base after it’s covered with silicone is an awful mess. Don’t ask me how I know that. If you are using a wood box and a light object, put a screw up into the object through the base.

Here is another trick: take digital photos of the object and its position in the box. Those will be very very useful for cutting the object out of the mold when it’s cured. You’re going to want to make cuts to release the object that will take into account the shape of the object, so it’ll release better.If your object is delicate you don’t want to be probing around it with a sharp knife. 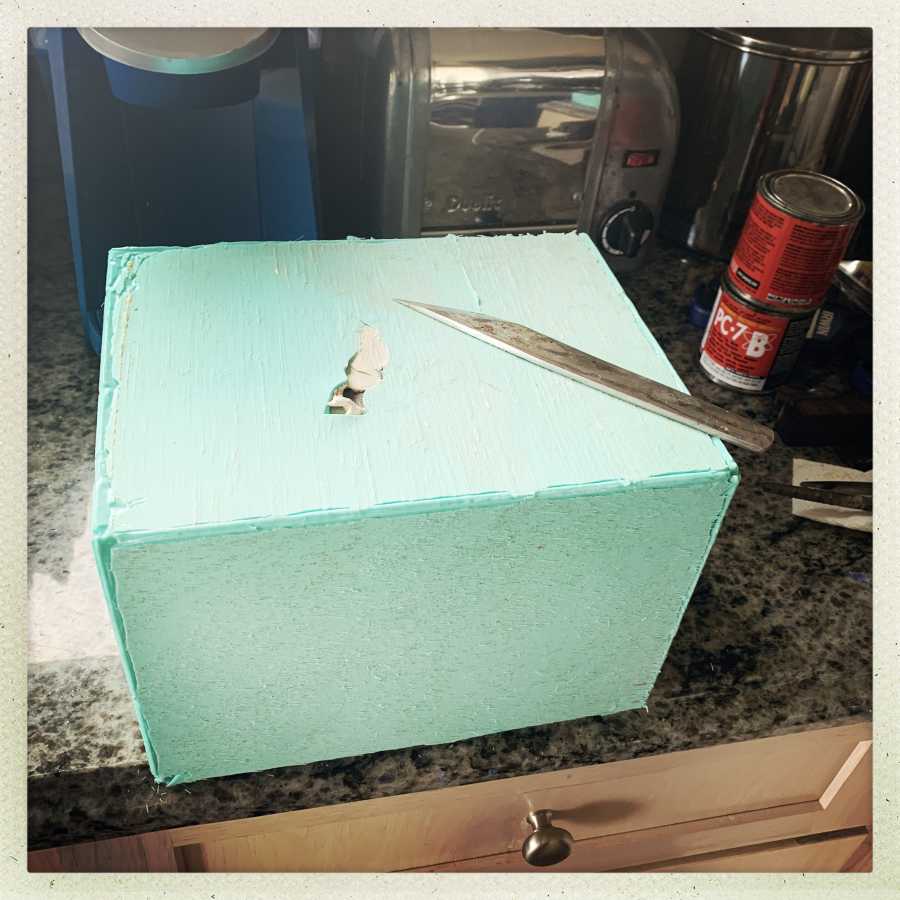 Now I have a big block of silicone with a bunch of quartz in it. The kiridashi knife shown above (not one I made, it’s a tamahagane kiridashi I bought in Tokyo in the 90s) is very good for separating molds: it’s scalpel-sharp and very pointy. You slice gently through the silicone and devise parting-lines for the mold based on your memory and photos of the object. I don’t have any pictures of that process because it’s hard to hold a phone, take a picture, and pull heavy pieces of silicone rubber apart at the same time.

This is the easy way of doing a mold. A harder way is to design the mold carefully, with parting-lines and multiple pours, with backing supports, so that you can save silicone at the expense of a great deal of time.

Getting the quartz out took me about a half an hour. It’s kind of fun – it’s like exploring for a fossil or something. I keep a few wine bottle corks around to use to wedge the cuts open as I go, but it’s still hard going. Pulling the quartz out of the rubber, at the end, took all of my strength to break the vacuum between the materials. 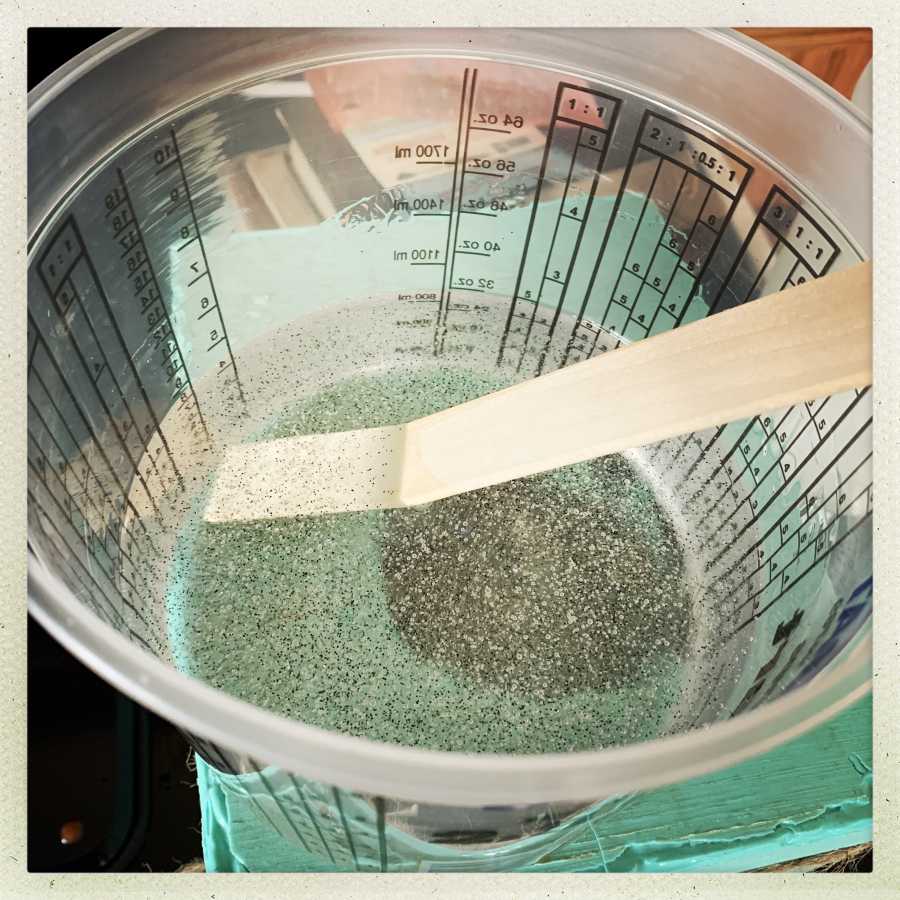 This is Alumilite “water clear” resin with a bit of black hologram flake added. The total pour took nearly a quart of resin, so I wound up blowing through my entire supply. When I got to the last bit of the mold to fill, I added a bit of black pigment to the resin and poured it on top. I hadn’t let any of the existing resin gel, yet, so it shot down into the mold and vanished. I had no idea what I was going to wind up with.

Water clear resin is very liquid stuff – it has the same surface feel as alcohol and it flows beautifully. To keep it from flowing out of your mold, you tie the mold block back together with a bunch of twine and tension it with chopsticks twisted into it. Believe me, you do not want an “unauthorized resin excursion” happening on your kitchen floor.

In the image above you can see a lot of bubbles. That’s fairly normal and that’s why the water clear resins are very light and thin – give them a lot of time for the bubbles to rise out. A trick that works well with some objects is to think about where the bubbles will rise and do a series of pours, each pour building into the next cavity as the resin rises in the mold. Another trick is to use a vacuum system to degas the resin – which still leaves bubbles, so I usually don’t bother with it. You need to understand each mold in order to design your “bubble management” strategy for that object. 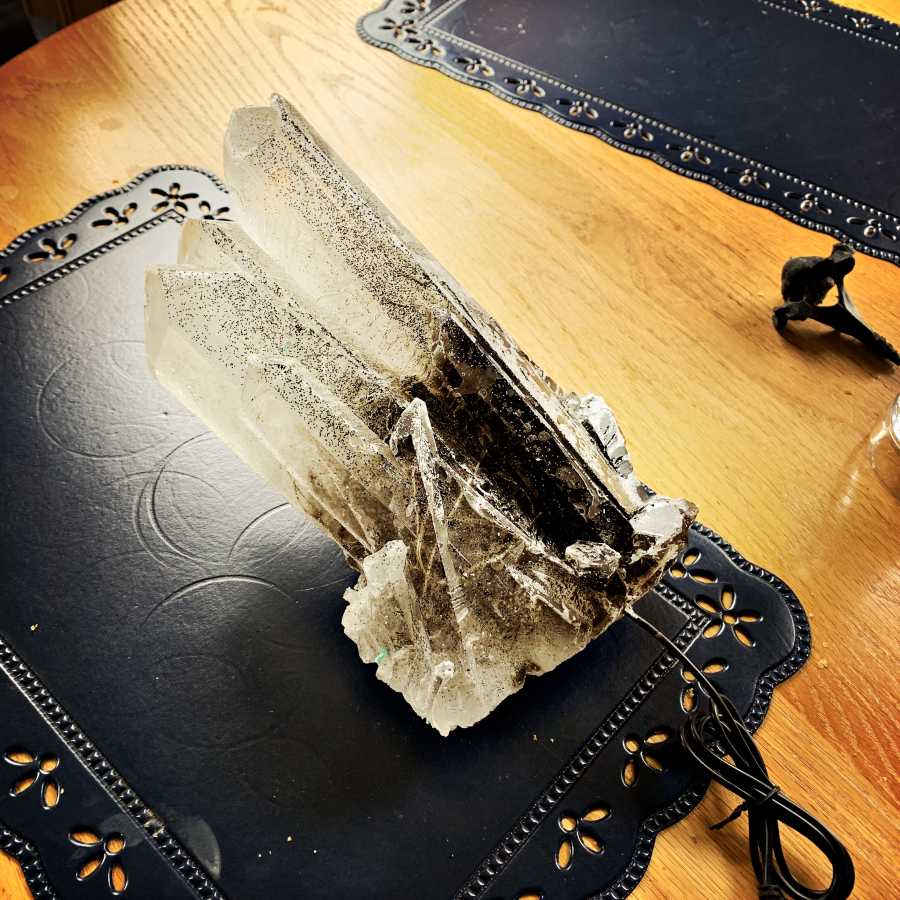 It turned out pretty cool! The bubbles are a real problem, though. One part of the problem is that I did the pour on a humid night (it cures overnight) and urethanes react with water by making bubbles. I could have/should have waited for a day that was more dry, or something.

The hologram flakes I put in were all slightly heavier than the resin, so they fell down on the surfaces that were the bottom of the mold. If I had been being more careful I would have put the flakes in the mold before pouring the resin, shaken them around, and then they’d have stuck more evenly to the surfaces. But I wanted them down inside the resin. It’s an experiment! 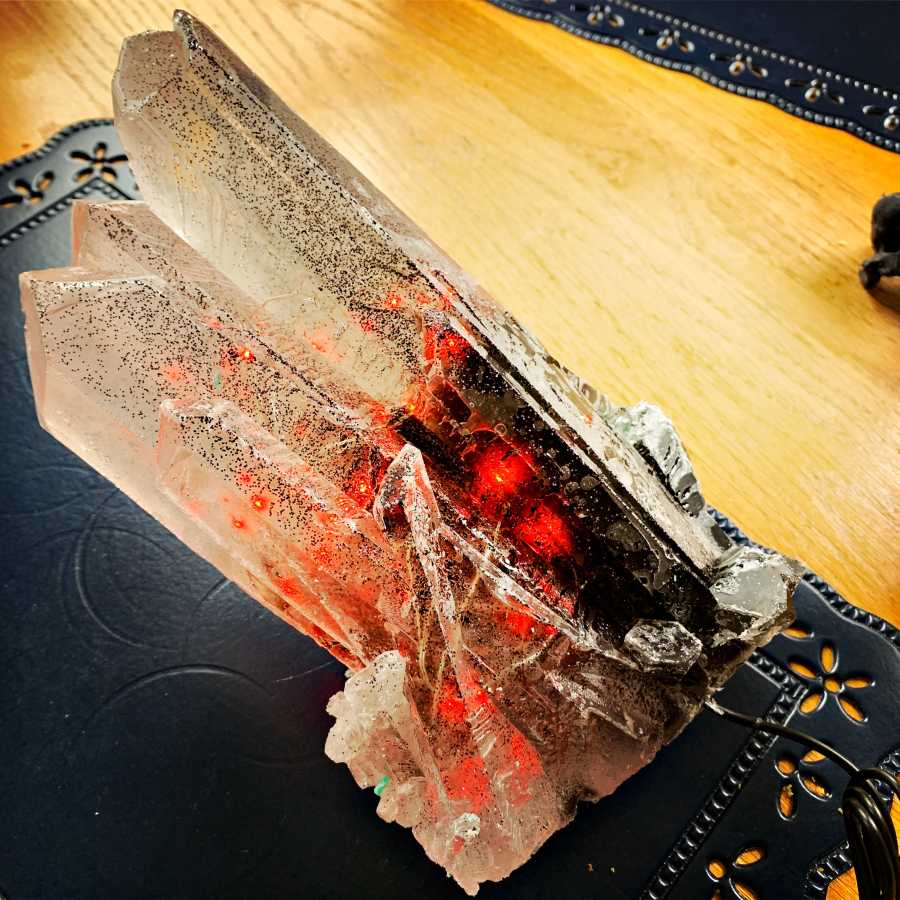 That’s what it looks like, plugged into a USB power supply.

I am thinking of taking the base onto the belt sander to flatten it down, then mounting it on a wooden escutcheon with a battery pack hidden in it. I could hang it on a wall or something. It’s a …thing.

Gilliel’s resin artworks are currently available as a fund-raiser for FTB, to help defray some of the expenses from Richard Carrier’s SLAPP suit. You can see them [affinity] Gilliell’s artistic sensibilities are more refined than mine, when it comes to resin.