Back in the day, the church could send its minions forth to rend and suppress books, shred their authors, and do battle against entire philosophies.

Sure: you hide behind them until police arrive. [My mad memetic skillz]

One problem with having that kind of power is that you can use it too much, and then it wears out. If you keep throwing that same curse at me for weeks at a time and I don’t even feel the slightest twitch of lumbago, I may begin to think you’re powerless. That, by the way, is why there’s no meme that goes, “Only a good man with a prayer can stop a bad man with a gun.” Well, there wasn’t. When the faithful mouth curses, they don’t do a very good job about tracking their effectiveness; perhaps it’s because they don’t want to know how ineffective their curses and prayers are.

Part of that comes when they start attacking fictions. That’s not unexpected because religion deals primarily with fictions – you have a population that has been acclimated to trading in absurdities like dead-but-not-dead jews and demons and fire-filled hells presided over by Ronnie James Dio. The problem is that they take this goofy stuff seriously. Then, they expect some of us to sit down with them and debate them, as if they were serious people. They’re not serious people, and their very familiarity with making stuff up gives them a significant edge in the exercise because, obviously, they are not bound to truth. Debates are a way of framing people’s opinions about things, in lieu of facts. That’s why there is not a lot of debate among physicists (except for the meta-stuff about “what should we study next and how?” or “where shall we go for lunch?”

Well, for one thing, if that exorcist knew any actual evil spells, his pals ought to strap him to a railroad tie and set fire to him, or whatever is the preferred environmentally-friendly way of getting rid of a warlock these days. 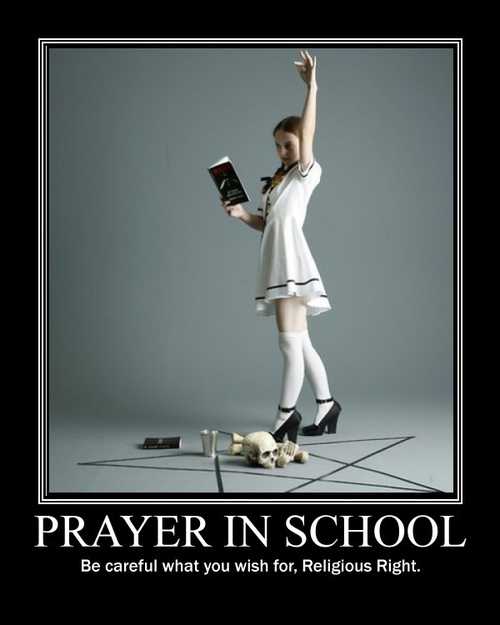 This is serious business, though. Never mind that someone has a better argument that “they are badly written” which might pull some weight:

“These books present magic as both good and evil, which is not true, but in fact a clever deception,” Rev Dan Reehil wrote. “The curses and spells used in the books are actual curses and spells; which when read by a human being risk conjuring evil spirits into the presence of the person reading the text.”

In other words, reverend dipstick is saying that conjuring evil spirits is so evil that an unequipped unprepared amateur might succeed in doing so. Aside from Donald Trump, who is unfortunately not a metaphysical manifestation, where does this come from? If it’s so easy can I throw a pentagram and dig some of that old fraud Crowley off my shelf, and summon a demon to eat the fraying cotton candy that is Donald Trump’s soul?

This is what I mean about how you can wear a meme out from over-use. Since it’s pretty obvious by now that reading Harry Potter does not summon demons – it only summons endless Hollywood cash-ins an tchochkes – then saying it’s going to happen amounts to a wrong prediction.

Curses and spells included in the bestselling books, which were published between 1997 and 2007, include “avada kedavra”, the “killing” curse; “crucio”, the torture curse; and “imperio”, which allows the wizards to control others’ actions.

Rebecca Hammel, superintendent of schools for the Catholic diocese of Nashville, told the Tennessean that Reehil had sent the email after an inquiry from a parent. She added that “he’s well within his authority to act in that manner”, because “each pastor has canonical authority to make such decisions for his parish school.”

Holy shit! I did not realize that Harry Potter disclosed “avada kedavra” (I.e.: “abracadabra” if you’re from New York) to millions of people. And now that it has been exposed: manifestly nothing has happened. Except that the catholic church continues to lose members and its senior leaders keep going to prison for sexually molesting kids.

Maybe the demons they should be worried about look like Cardinal Pell.

While he was still a cardinal in 2003, the future Pope Benedict XVI described the books as “subtle seductions which act unnoticed and by this deeply distort Christianity in the soul before it can grow properly.” 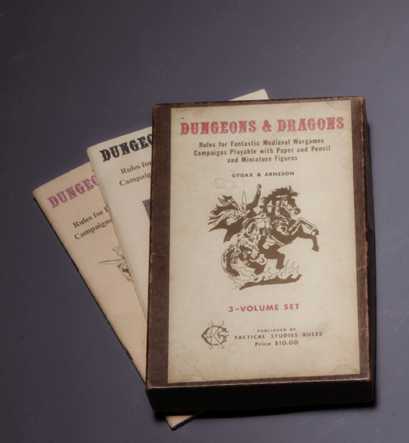 I still have my original set

Then he’s a fucking jackass who deserves to be mocked. I grew up during the brief period where the religious right was getting upset about kids learning demonic spells from Dungeons and Dragons, which is funny, because their whole bible sounds like a really bad LARP campaign that spun off the rails somewhere. The whole catholic church is, basically a goofy LARP campaign, with all those saints and +10 Finger of John The Baptist magical items, incense, big hats and satin slippers. If this fellow is worried that reading Harry Potter is going to make some kid want to be a warlock, he really needs to take a good look at the pope. Especially the Ratzinger one, who looked like he was going to whip out a Sith-lord’s light-saber at anyone who looked askance at the handsome priestly comfort-boy that travelled everywhere with him.
The reason christians are bothered by Harry Potter is because the potter-verse reveals the christian landscape to be just as empty and fictional. To be fair: a christian’s prayers are exactly as effective as the spells from a Harry Potter book. The difference is that Harry Potter is better written (and I think Harry Potter is somewhere on a scale between 50 Shades of Gray and a Dan Brown novel)

Let me show you who’s the silly one: the catholics still have exorcists?! What the fuck for? I sure hope they keep them away from the kids – scary supernatural bullshit can make an impression on a young mind. It’s utterly irresponsible (and ought to be illegal) to be bringing exorcists in to schools. What the hell kind of unregulated human psychology experiment is this?

Most amusing, though, is what the religious haven’t seemed to figure out, yet. Computer games utterly gutted religion, starting back in the 80s and continuing to this day. The number of games that portray divine interactions with the player is gigantic – pretty much every game system with magic in it has some kind of spiritual explanation for the empowerment of that magic. And none of them is “catholicism”. Religion is portrayed constantly in gaming as nonexistent, ineffective, a mere plot device. When I used to play World of Warcraft my tauren tank would intone a brief prayer to the earth mother (thanks to a macro in the user interface) before pulling a difficult boss. That does not make me “religious” – it means that I understand that religion is LARP and that ritual is something humans do and it can even be funny. What ought to be driving the catholics crazy is that, every time a kid fires up WoW or Dark Souls or Skyrim they are mocking religion by recognizing it over, and over, again as an ineffective sham.

Don’t worry about Harry Potter warping kids’ brains. Worry about how your silliness and your inability to come to grips with reality is going to spawn school shooters and sociopaths who join the army to kill muslims.

For their general racism and voter suppression, I have cursed North Carolina with Expecto Blub Blub – the curse of rising water and hurricanes. Because it’s such a powerful curse and requires teratons of energy, it’s a slow-build and it’s going take a few decades to really whack them. It’s already started, though. Repent!