One of the coolest aspects (to me) of mold-making is that we can alter objects in the course of duplicating them.

I think of this as “editing” – you can use oil-based (non sulphurous) clay to make adjustments, fill cracks, or add features of your own. Then, the edited object goes into the silicone to make a mold, from which you can cast a zillion copies of the edited version. Silicone molding compounds produce molds so accurate and detailed that you can easily go several generations on an object, and there’s no discernable loss of detail. In fact, some of the lifecastings I’ve done are so lifelike that I took to sometimes having the subject smooth a fine layer of vaseline on, to make pores and whatnot a bit less prominent. 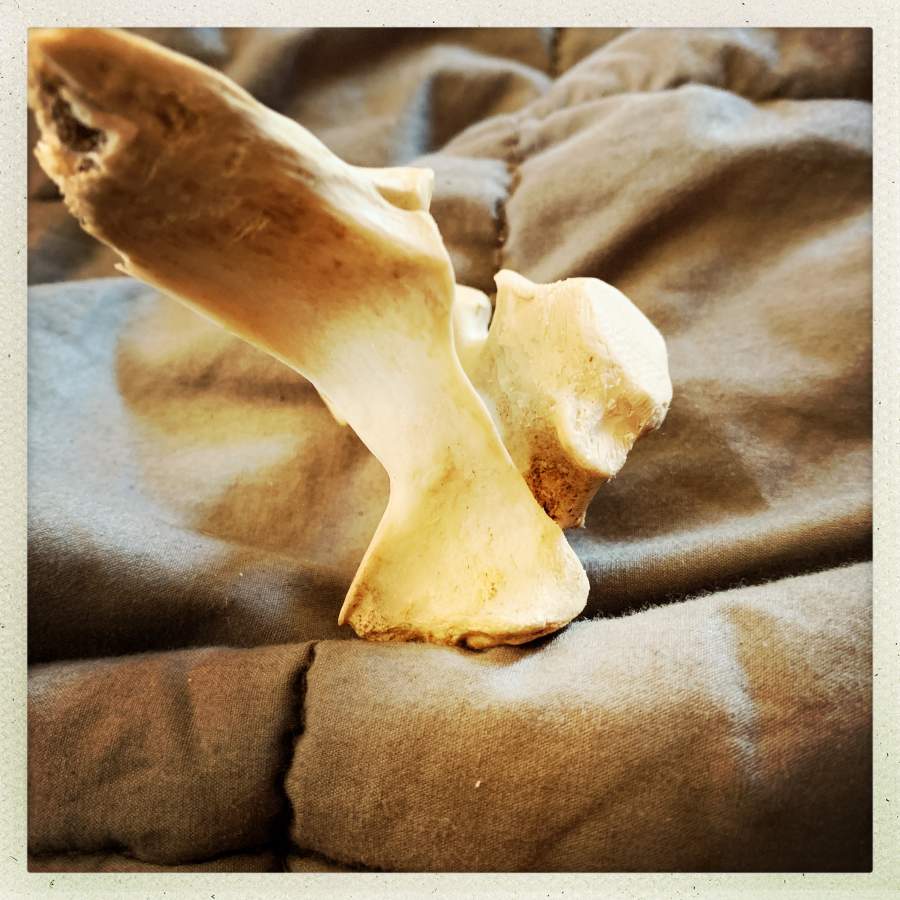 Here is an example: this spinal piece Jenna sent me had a pocket on the bottom (where presumably the spinal disc sat) but I filled it in and flattened it a bit so it would make a better mount-point for a threaded screw. To get the “bone” texture I pushed all the clay in place then wiped it down with a brillo pad. Unless the person looking at it knows anatomy well, they won’t detect it – and, besides, that part will be ground flat, have a screw in it, and be snuggled up against the handle of a knife or cane or blade of a push dagger or whatever. 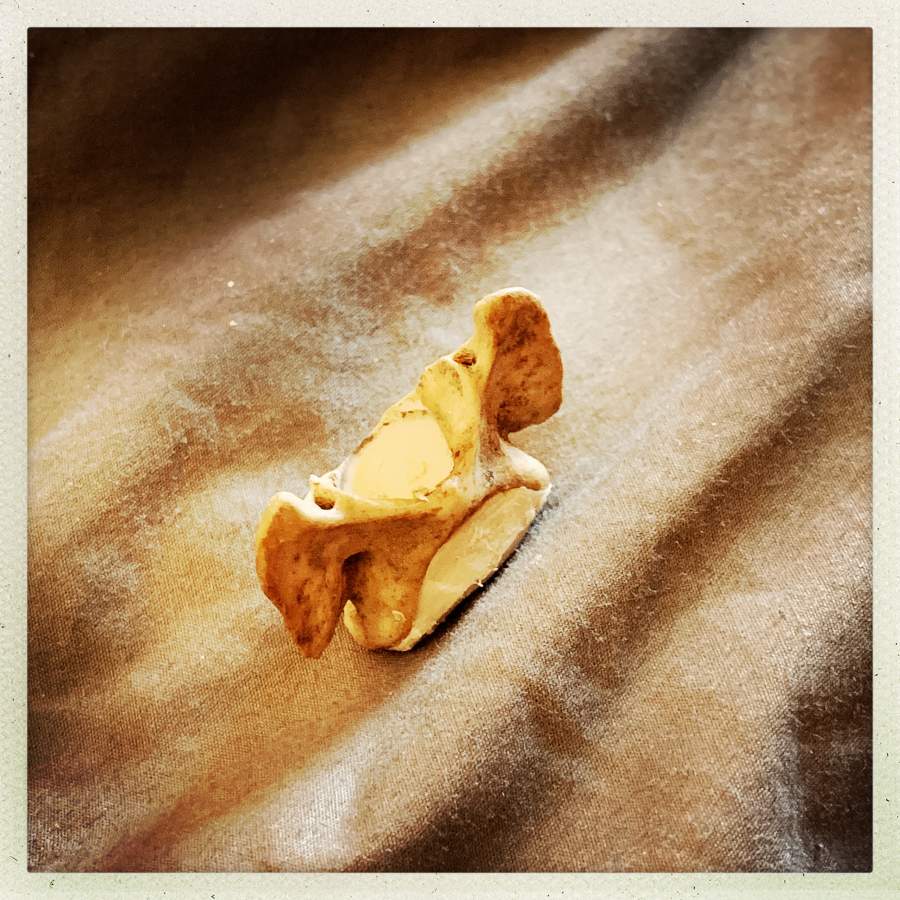 This is a vertebra from a fox, I believe, which I have altered to form the body of a wing-nut. There’s a design for a knife I’ve had in mind, which is a sort of Jack The Ripper-style victorian mortician’s knife (think: From Hell) which is constructed to take down for autoclaving, with a big silver wingnut on the end of the handle. This is better and bigger than the silver wingnuts I have already made (anyone want a silver wingnut?) but I thought I’d give it a go and see how it comes out. The nice thing about silver is you can “delete” a casting by re-melting it.

Yesterday I decided to try to pour my “silver knuckles” mold and made a big crucible-load of silver and some tin. I had just successfully casted two more crow skulls (one for auction, another for a friend of a friend) and felt like I was on a roll. When the crucible went into the forge, it suddenly cracked like an egg and dumped metal across the fire-bricks and into the lining. Today I’ll be taking the firebricks out and trying to dig the silver out of the satanite. 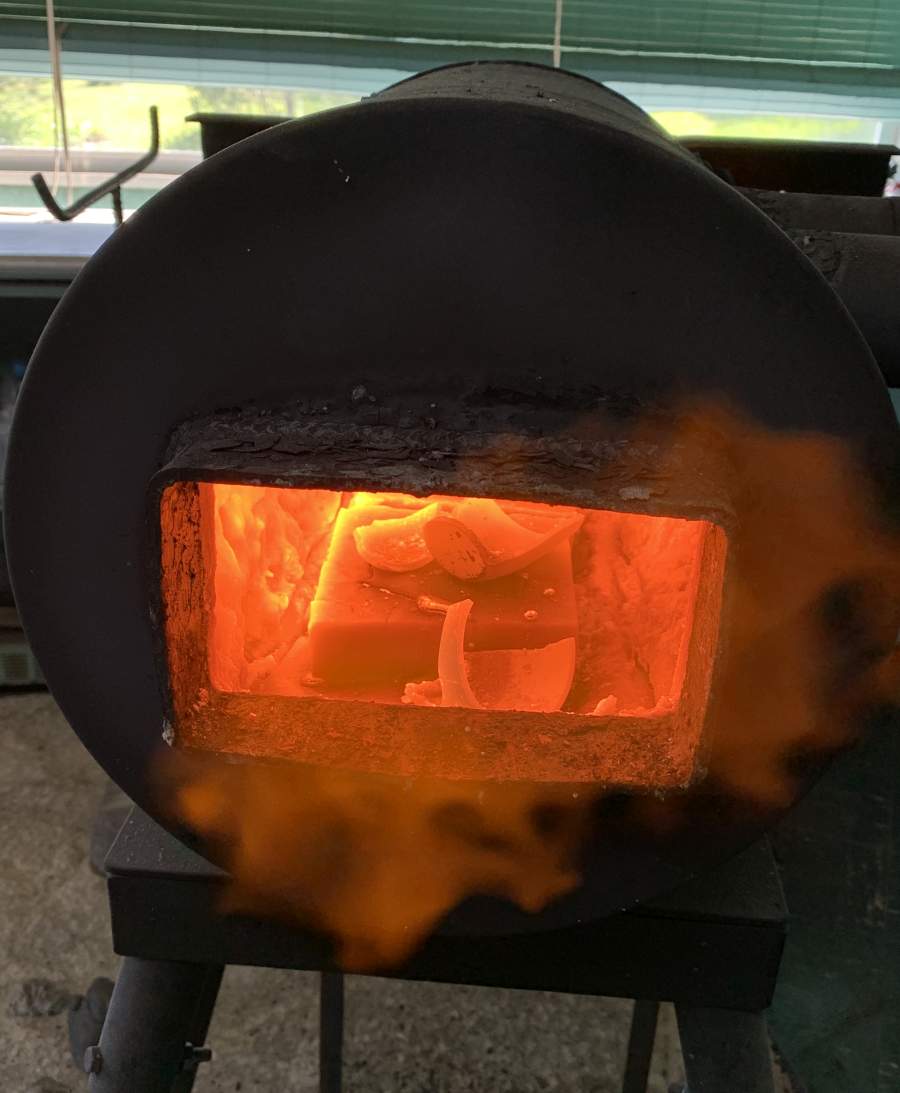 I was very unhappy about that, but hot metal changes your perspective from “Damn it! Why did this bad thing happen!?” to “Damn it! Oh well I didn’t get any on me, so, (shrug)”

It’s super pretty in there – it looks like mercury. I hope it’s not as toxic. I do not want a mini Chernobyl in my shop.

A few days ago, in a moment of unwisdom, I challenged Mike P to a “straight edge razor bakeoff” and I’ve been noodling around what my entry is going to look like. Since I know he does not read my blog I’ll mention that my plans look sort of like a mini bearded viking-style axe with a massive hollow grind and a zig-zag welded edge. Since it’s going to be a complicated billet, I started laying out the metal and attempted to weld the pieces that will comprise the edge. But, as the forge was hot, I simply flicked the molten silver away with tongs, removed the broken crucible, and got busy. When I put the billet in and fluxed it up, something unusual happened – unusual because most blacksmiths do not forge in a forge with puddles of liquid silver in it – the billet sucked the silver right up, as though it was solder. That made sense, of course, because it was, for all intents and purposes, solder.

When I took the billet over to the press, the silver squirted out under the pressure, making little dramatic lines of hot metal in the air, none of which managed to hit me. So I concluded one thing: do not attempt this again. The billet refused to weld, presumably because of the silver, somehow. 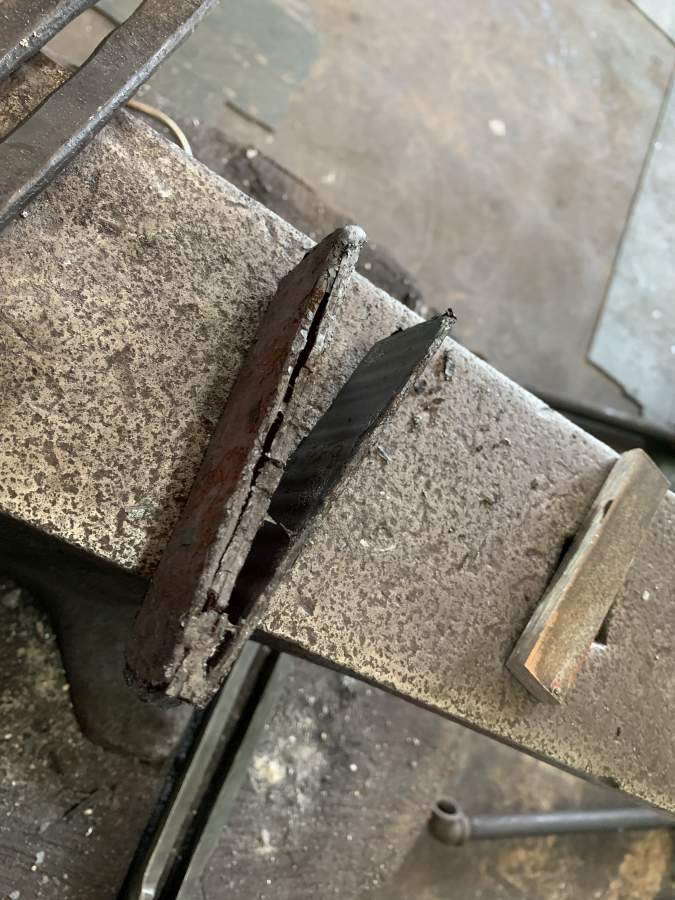 Call it a “failed involuntary experiment” – also known as “bummer.” The billet, as I laid it up, was very clean and the metals are highly compatible. It should have been just fine but rather obviously, it isn’t. The only variable was the silver so that’s where I am assigning the blame.

I hope that cleaning out the silver chunks and replacing the firebricks will get my forge back in action.