I’d insert an animated .GIF of MC Hammer doing his thing, but let me try to keep this a bit more sedate.

The Anyang hammer arrived on tuesday. It was supposed to arrive Wednesday but the trucking company called and said “it would be more convenient for us if we deliver it tomorrow.”

Unfortunately, they didn’t have a truck with a lift-gate. So there was a lot of concern on the part of the shipper that we not drop it, tip it over on someone, or whatever. I shared those concerns, but Ken said “We can handle it.” Spoiler: It turned out to be a piece of cake.

Trucking companies are funny. You tell them “need a liftgate” and they send a truck without one. Tell them “please call an hour out so I can assembly my crew” and the driver calls “I’m at your driveway” when you have just gotten out of the shower. Panic! This time the driver called from a truckstop about 5 miles from my house. So I asked him if he’d mind dropping it at Ken’s, two miles closer to him, where the crane and heavy gear are located. “Sure.” Then I did my best “quick! to the Batmobile!” routine and got there just as the semi was pulling up. 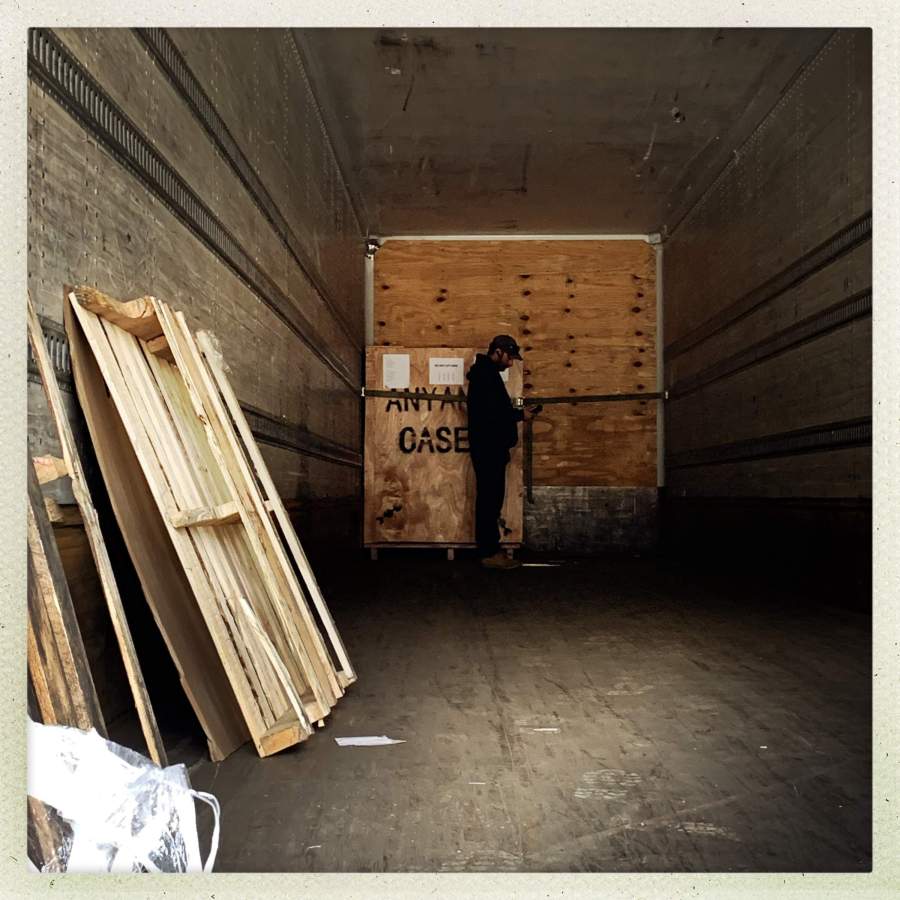 The hammer’s case says “Warning TOPHEAVY” all over it. I’m a bit skeptical about that, since a hammer that was actually topheavy would be a lethal threat. I think that what they really meant was “Do not drop this on you.” 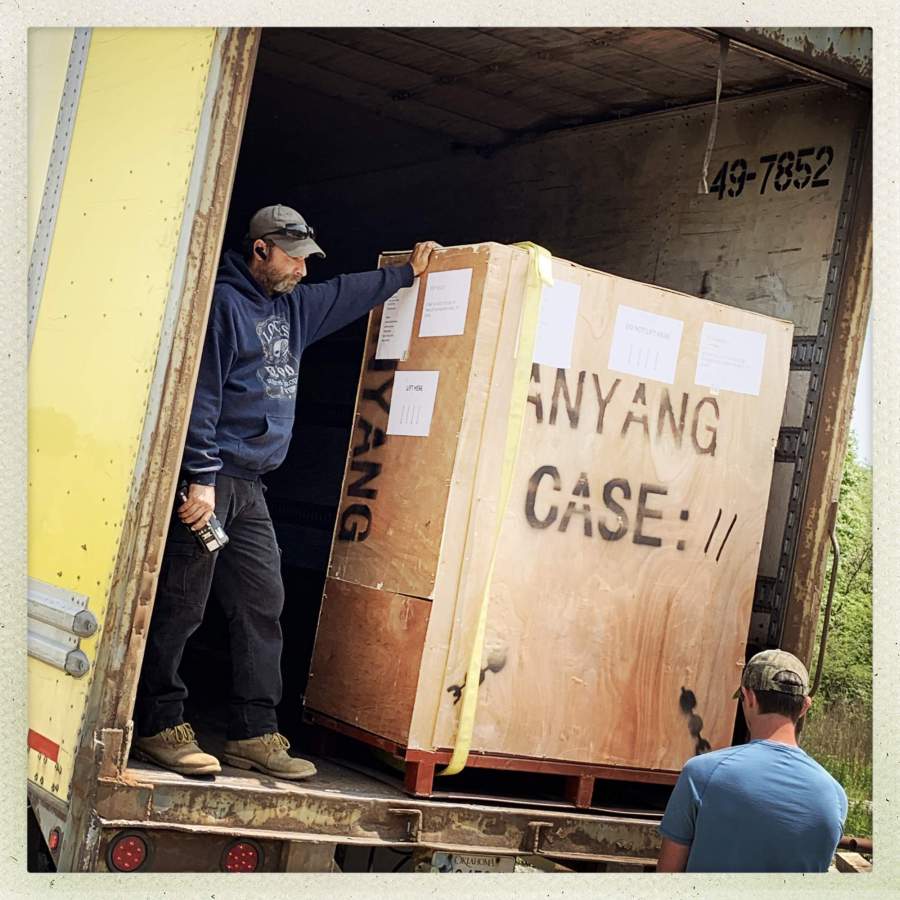 Truckers are generally cool and don’t care much so long as the stuff gets unloaded out of the back of the truck so they can drive off. We originally thought we’d back the crane truck up even with the back of the semi, level it with the boom-arms and pallet-jack the box out – but the semi was a lot lower than the crane truck and that idea was off. There was not enough room at the top for the crane boom to fit, either.

In the picture above you can see Ryan M. with his back to the camera, pondering things. The steel pallet is tough and well-marked for lift points. 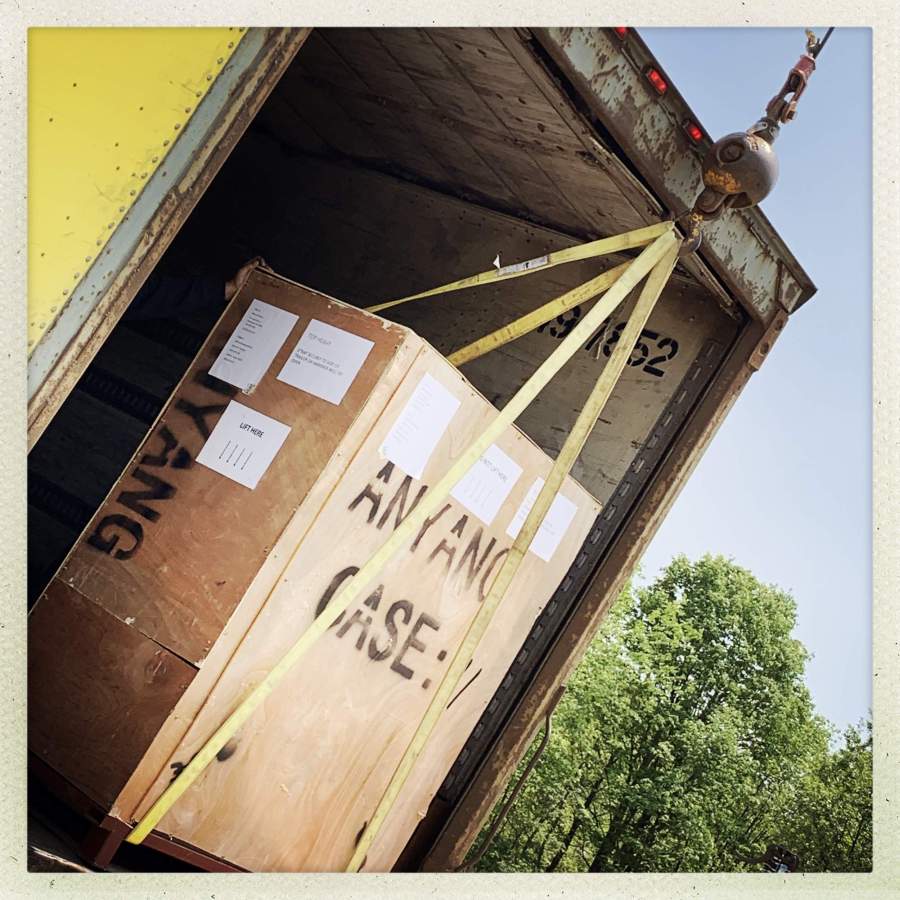 We all collectively concluded that with the straps that way, it was not possible for the hammer to flip unless a strap broke. Even the pallet could break and we’d be OK.

The crane lifted the pallet just a wee bit until the hammer swung gently out the back of the truck. The trucker inched forward and Ryan turned the crane and deposited the load neatly next to the wall. It’s going to sit there for a while until the building is done. 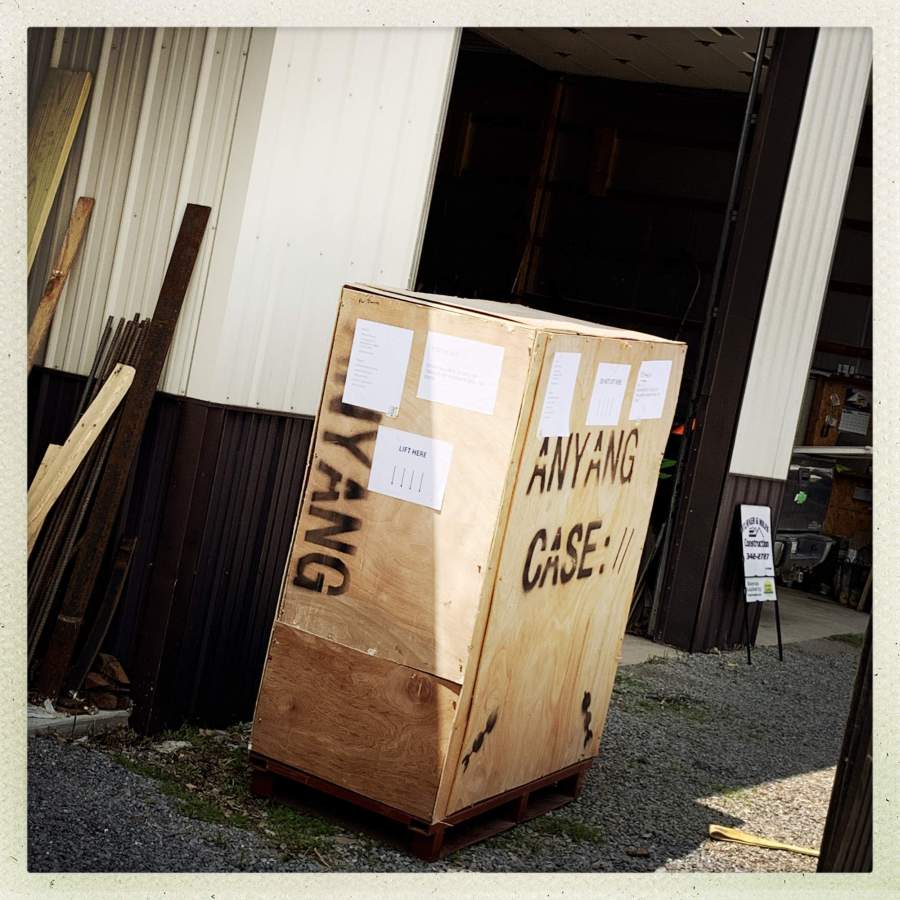