I’m an unapologetic packrat. So, a few years ago, I decided to resolve that problem by stipulating in my will that my executor get rid of all my stuff at an estate sale. It’s a form of recycling and nobody who cares about me or my stuff will have to sort through it and figure it out. Don’t worry for them, the potassium cyanide is clearly labelled.

Back in the 1990s I had a huge house and a gigantic library occupying the space over a 3-car garage. It was completely full of book cases, and had 2 comfy chairs, a sideboard with vintage port, nuts, and a coffee machine with a refrigerator and half and half. I won’t say my life was perfect, at that time (in fact it was a very unhappy and upset life) but I was profoundly appreciative of my great good luck and took full advantage of it. Je ne regrette rien.

I think it was reading Perez-Reverte’s The Club Dumas,[wc] which is about book collectors and how obsessed they get, and it occurred to me that I could collect a few books. I started to scour Ebay for 1st editions of my favorites. It’s been a habit ever since. And, like the characters in The Club Dumas I have my stories of “the big one that got away” and my regrets that I bought a big house instead of a big pile of books (but then I’d have noplace to put them). When I moved to the farm in 2002, I unloaded nearly a semitrailer-load of books on local libraries. My small library here is the distillation (and the beautiful oak bookcases) of the best of my collection. I have the top of one case devoted to my special books – my Voltaire encyclopedia, Thomas Paine’s The Rights of Man, a fair edition of Rousseau, a signed copy of The Phantom Tollbooth, a publisher’s review pre-print of 1984 and the US Army War College’s first mimeographed translation of Mao on Guerilla Warfare. That sounds really tony, but it’s not: most of these books were acquired on the cheap, through patience and mastering Ebay’s search engine (hint: you can search for “book, 1st, buy it now” and just load up titles) A lot of these are books that show up and I snap them up before anyone else even realizes they are gone. Ebay’s odd: nobody will forge a book at those prices, scammers stay toward laptops and iPhones, and less well-known writers (e.g.: Voltaire) (no, really, no shit) crop up with ridiculously low prices, often. I paid $19 for my 1st edition of Voltaire’s Encyclopedie – it cost more to ship them. The edition of Paine was $175. I kid you not, I have seen autographed 1sts by Steven King fetch much more than Voltaire. Horreur!

Sometimes the book you want is rare in a 1st edition, and collectible. Then you content yourself with not having it and letting some 1% of the 1% have it. A few years ago Histoire D’O – 1st edition – showed up for $45,000. Then there was the signed edition of Nabokov’s Pale Fire that sold for $16,000. And the signed 1st of Mark Twain’s Eve’s Diary that went for $4,500 while I was in transit home from the Persian Gulf.

Anyhow, I was looking at Voyager’s book cover series over at Affinity, and having fond thoughts about some editions of Crowley (Crowley is eminently affordable and giftable) and I punched in a search for Baudelaire’s Fleur Du Mal. Ow.

I will not be bidding on this. But, damn. That’s close as I come to a “holy object”! Writers like Alfred Jarry and Baudelaire did not do large editions, and they are instantly rare and collectible. 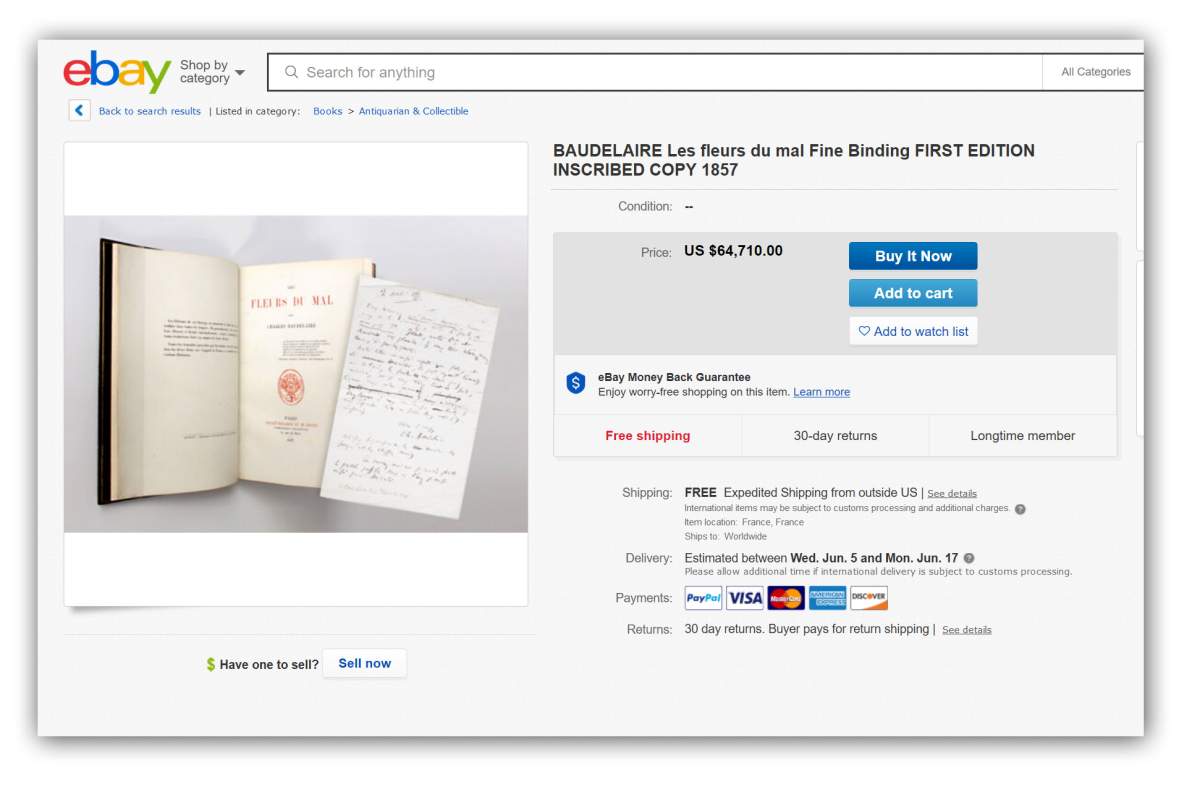 About 10 years ago I discovered that one’s death is one’s final performance and the manner of it can have a tremendous impact on others. I don’t plan to die soon but I do dangerous things with chemicals and propane and machine tools and I drive a lot in deer country – it might happen. Anyway, I am not sure if it’d be interesting to you all if I post a few things about my process for clearing the decks when the wheels fall of the crazy train that is me. I feel like I am already self-referential enough, I worry about getting too much into the weeds of myself. But, I promise you I will never go so far as to post “sex wanted” ads here. So there’s that.

If you like detective fiction with exquisite English, I recommend the Perez Reverte book. [wc] His books are consistently good and you are likely to enjoy any of them you pick up, but The Club Dumas and The Flanders Panel are something you can completely lose yourself in. “5 stars”

Here’s another story by me about books [stderr] if you want a true white-knuckled tale of bibliophilia.

I noticed that queen Elizabeth gave Trump a copy of Churchill’s history of WWII. That’ll be a nice addition for the Trump presidential library. Right now I am picturing a gaudy gold-covered ticky tack hotel room with a portrait of Trump screwing Stormy Daniels, by Jeff Koons, and a book-case with a single, lonely, book on it.

How Not To Sharpen a Knife » « Theft of Intellectual Property