Before long they saw the towers and flags of Dictionopolis sparkling in the sunshine, and in a few moments they reached the great wall and stood at the gateway to the city. 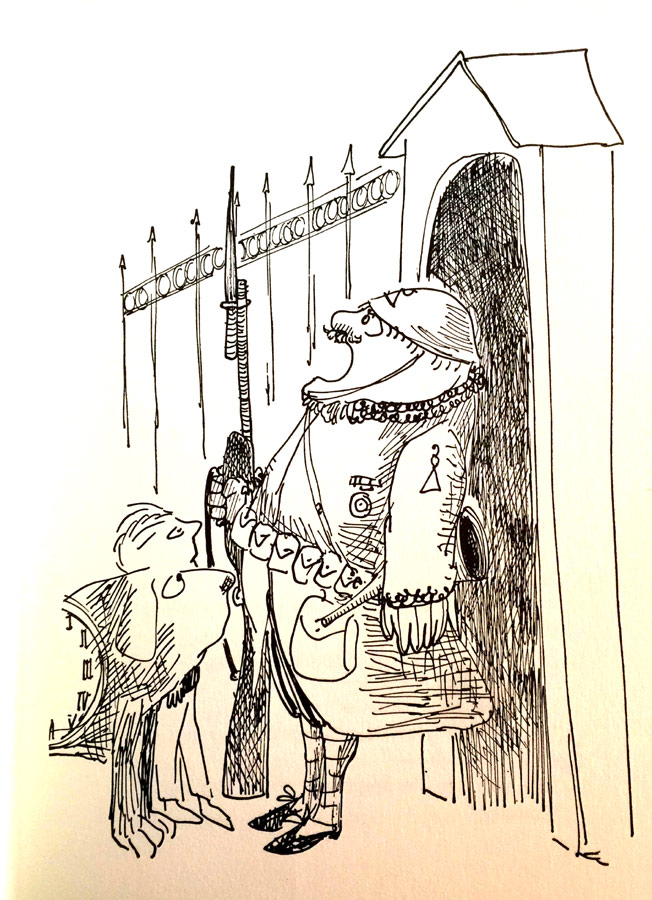 “A-H-H-H-H-R-R-E-M-M,” roared the gateman, clearing his throat and snapping smartly to attention. This is Dictionopolis, a happy kingdom, advantageously located in the foothills of confusion and caressed by gentle breezes from the sea of knowledge. Today, by royal proclamation, is market day. Have you come to buy or sell?”

“I beg your pardon?” said Milo.

“Buy or sell, buy or sell,” repeated the gateman impatiently. “Which is it? You must have come here for some reason.”

“Come now, if you don’t have a reason, you must at least have an explanation or certainly an excuse,” interrupted the gateman.

“Very serious, very serious,” the gateman said, shaking his head also. “You can’t get in without a reason.” He thought for a moment and then continued. “Wait a minute, maybe I have an old one you can use.”

“That’s a good reason for almost anything — a bit used perhaps, but still serviceable.” And with that he placed it around Milo’s neck, pushed back the heavy iron gate, bowed low, and motioned them into the city.

(The Phantom Toolbooth, by Norton Juster)

I grew up with a grandfather who had survived the great depression, and had managed to successfully raise a family under very hard conditions, including working some extremely unpleasant jobs and hunting to put extra protein on the table. He was a cheerful man, big-hearted, and fond of goofy jokes and complex pranks. One of the things his experience in the depression left him was a profound sense that things should be done from need. I can certainly understand why a person who had needed to do so many things would feel that way, but it almost became a nervous tick for him, “Oh, you don’t need to do that!” or “nobody needs a pair of jeans that costs $40!”  I remember him blowing up at my cousin for buying designer jeans that she didn’t need, for that whopping price.

“Why not?” became my reason for many things. “Why not go to the flea market?” Well, of course you don’t need to go, but it’s a lovely day to be out and about and we don’t have to come home with a load of junque.* I learned early on how to parry The Argument From Need, with a variety of counters, but “why not?”  – in spite of being a bit worn on the edges – worked best of all.

I’ve encountered many people in my life who feel that they need a reason to do things. It seems to me that accepting that there is no god leaves some people without a sense of purpose. It makes sense, since many are raised with the idea that there is a god, and god has a purpose for them and therefore they have a reason for existing. To a certain degree, my grandfather’s experience during the depression made necessity his teleology. An epicurean’s reason for doing something might be to remove discomfort or pain first and foremost, and seek comfort and companionship secondly. Reason, in the sense of “rational thought” and reasons, in the sense of “why do I want to do that?” are important to us, and are the ultimate underpinnings of what we consider moral behavior, morality being a set of catch-all reasons for certain types of behaviors.

“Thou shall not kill!” trumpets Cecil B. DeMille.** The first philosophical engagement comes moments later when Socrates asks “Why not?”

For a period of years, I played a lot of World of Warcraft, finally joining a guild and gearing up for weekly raids. I was my raid team’s tank*** and I got rather fond of programming various macros into my controller, so I could direct fights as needed by yelling pre-programmed advice. I had a battle-cry. It was:

“What’s the worst that can happen?”

(* Grandpa always spelled it “junque” because he imagined a hoity-toity French antique store with that name.)

(** Many American christians accept the idea that the 10 commandments are reasons to live by, without realizing that the version they know is based on a paraphrase by Cecil B. DeMille, Hollywood’s foremost producer of swords and sandals films.)

(*** The tank is a character who is geared up to be able to withstand as much damage as possible. Tanks are responsible for planting themselves in the middle of the encounter, and keeping the boss focused on them with taunts and damage. The basic structure of a boss fight is that the tank “pulls” the boss by charging in and beginning the attack, a healer focuses on keeping the tank’s damage levels in the safe zone by healing them or resurrecting them, and the Damage Per Second heavy hitters are responsible for pouring as much firepower on the boss as they can while the boss is focused on the tank.)

Obligatory commentary on The Phantom Tollbooth:
It’s #900 in the Amazon best sellers ranks, which makes it better than Donald Trump or Hillary Clinton’s ghostwriters’ offerings.  It’s on my recommended reading list, so you can try a copy risk-free if you want. “What’s the worst that can happen?”

I’ve never been able to decide whether Norton Juster was just writing a beautiful story (accomplished!) or whether he was writing a deep book of philosophy hidden under a beautiful story. I think the great writers do both and sometimes they notice, other times it just happens. For me, every page of the book has something magical. I think I first read it when I was 10 or 11, and I mistook it for a kids’ book. It is and it isn’t. When I was a kid I enjoyed the description of the sunset/sunrise orchestra, but now that I’ve lived through nearly 20,000 sunrises, I can’t watch the colors of clouds change as the light shifts, without hearing the music of Chroma the conductor. It’s magic on the page.