MK-ULTRA was one of the CIA’s programs devoted to mind-control. It became part of the whole “mind control” memeosphere related to “manchurian candidates” in the late 1950s/early 1960s.

If you watch the doings of the intelligence state/war party, you’ll notice a strong tendency in them to refight the last war or prepare for their own nightmares – what a psychologist might call “projection.” They became deeply concerned that the Russians might be doing mind control because, well, they were trying to do mind control themselves, and must therefore have believed it was possible. [This is similar to how the military is beating the war-drums about Iran attempting to re-fight Millennium Challenge 2002 for real][stderr] MK-ULTRA was one of the experiments I learned about as an undergraduate, which caused me to begin to reject the validity of a great many psychology experiments – they seemed more like something that was cooked up by a sadist, than a genuine attempt to learn anything.*

Another thing that came away from MK-ULTRA was the story, often deployed, of people tripping on LSD and thinking they could fly, then jumping out a window and dying. I was told that story, repeatedly in elementary school and high school, and (since I had not yet realized that American schools’ purpose is to fill children’s heads with lies) I believed it. It is typical of the government to commit a crime against humanity, and then use the facts behind that crime as another piece of leverage against their citizens. The myth of people tripping on LSD and thinking they could fly was often deployed during the early attempts to justify its regulation. But, as Timothy Leary and others have pointed out, governments were probably more concerned with LSD’s tendency to “open people’s minds” to questioning what is going on around them. I, myself, have experienced that rush of alternative thinking that comes with many of the major psychoactives (including tequila!) and that’s why I believe they are regulated: they encourage people to question wars, and capitalism, and the wisdom of stockpiling nuclear weapons instead of making pizza for everyone.

For you who are all up in arms (as I am) about Donald Trump’s attempt to obstruct justice, let me remind you that obstructing justice is most of what the US Government does, aside from bombing other countries. The CIA did not invent the idea of destroying its records with Gina Haspel and the Bush Administration’s torture program: [wik]

Project MKUltra was first brought to public attention in 1975 by the Church Committee of the United States Congress and Gerald Ford’s United States President’s Commission on CIA activities within the United States. Investigative efforts were hampered by the fact that CIA Director Richard Helms ordered all MKUltra files to be destroyed in 1973; the Church Committee and Rockefeller Commission investigations relied on the sworn testimony of direct participants and on the relatively small number of documents that survived Helms’s destruction order.

The CIA being prohibited from activity within the United States (internal spying is the domain of the FBI) the Church Committee was important – it identified a large number of violations of the public’s trust and a few crimes against humanity. Naturally, nothing was done except to pass more laws making the things that were already illegal illegal again; laws that were ignored a few decades later, as a matter of course. Domestic surveillance and wiretapping warrant processes were established as a result of the Church Committee’s recommendations and those are the processes that were shredded by the Bush Administration because they were too inconvenient. (I will note that it was illegal from the beginning for the CIA to commit domestic assassinations; it boggles my mind that most Americans want to assume that that’s the one rule the CIA decided to obey.) 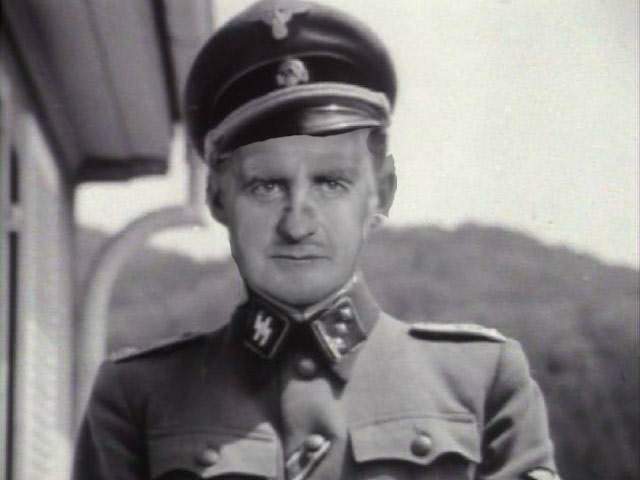 Dr. D. E. Cameron’s head photoshopped onto Joseph Mengele’s body and uniform, like it was made to go there.

MK-ULTRA did a bunch of really nasty things, including grabbing mental patients and subjecting them to electro-convulsive shocks and propaganda – basically straight out of A Clockwork Orange – and all of this was done under highly questionable conditions of patient consent. Once the patients were discovered to experience memory deficit after their shock therapy, the CIA-employed psychologists felt that they didn’t need to worry so much about what they did because the patients weren’t going to remember. There are a fair number of good documentaries about this, as well as some bad ones – it’s pretty easy to turn these stories into wild-sounding nightmares. If you want to learn more, I’d suggest you start tugging on the thread [here] at The Washington Post. The documentary/dramatization Wormwood is about aspects of MK-ULTRA as well:

To erase or “de-pattern” personality traits, Cameron gave his subjects megadoses of LSD, subjected them to drug-induced “sleep therapy” for up to 65 consecutive days and applied electroshock therapy at 75 times the usual intensity. To shape new behavior, Cameron forced them to listen to repeated recorded messages for 16-hour intervals, a technique known as “psychic driving.” Cameron and the CIA were interested in brainwashing and the ability to redirect thought and action. The patients did not consent to the treatment and were never told they were being used for research.

Some of you probably think I am still unfairly rough on the field of Psychology; but this is just one of the peaks of the shitberg that is psychology (and don’t call this stuff “popular Psychology” because it was done by under the aegis of a major university (McGill), by a fully accredited professor of the field) The things we know about MK-ULTRA are only the parts for which Richard Helms didn’t manage to destroy the evidence.

The story about LSD making people think they could fly is based on the death of Frank Olson [wik] – a CIA employee who was given a massive dose of LSD, unknown to him. Imagine if you had dinner and drinks with some co-workers and they slipped you the equivalent of 30 hits of acid without your knowing it, or having any prior experience with the drug. You’d probably think, as Olson did, that you had lost your mind. Olson “subsequently suffered from paranoia and a nervous breakdown”, asked to quit the program, and committed suicide by jumping out of the 10th floor window of a hotel. The CIA didn’t tell Olson’s family what happened, and they were allowed to believe that the incident was entirely Olson’s fault, until they read about it in the Church report. In the meantime, the US propaganda machine re-purposed Olson’s murder as an anti-drug meme, when it should properly have been an anti-CIA meme. (“Parents, don’t let your kids grow up to join the CIA because they might be driven to suicide by their co-workers!”)

Naturally, when the words “MK-ULTRA” appeared in my email, my eye jumped to them. It’s from one of the spam-senders that periodically stuffs ‘tactical’ junk into my in-box: 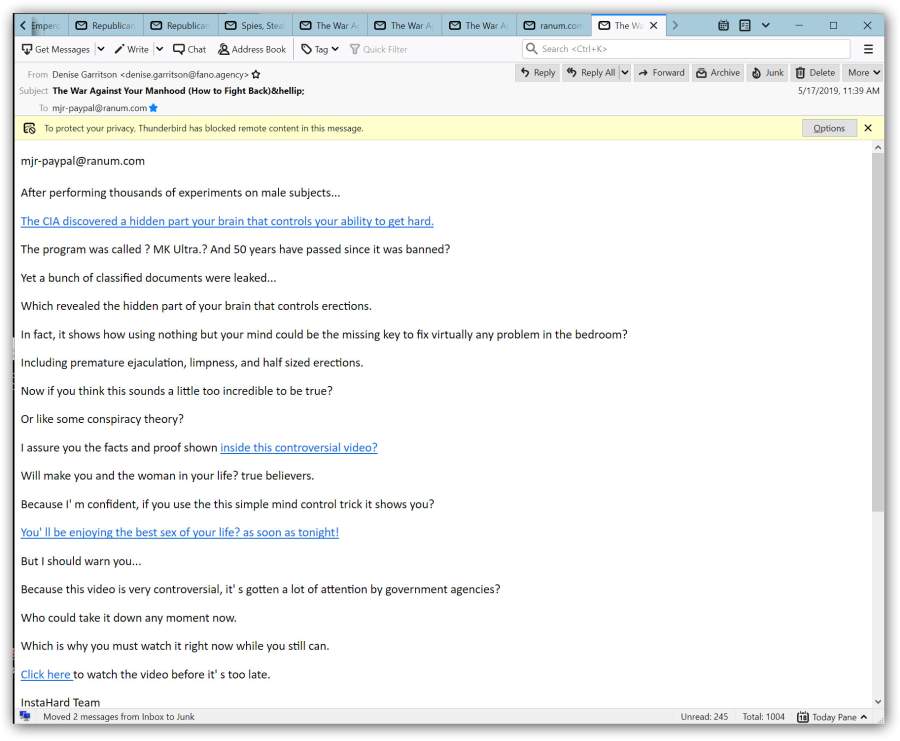 Spammers are such despicable human beings:

After performing thousands of experiments on male subjects…

The CIA discovered a hidden part your brain that controls your ability to get hard.

The program was called ? MK Ultra.? And 50 years have passed since it was banned?

Yet a bunch of classified documents were leaked…

Which revealed the hidden part of your brain that controls erections.

In fact, it shows how using nothing but your mind could be the missing key to fix virtually any problem in the bedroom?

Including premature ejaculation, limpness, and half sized erections.

Now if you think this sounds a little too incredible to be true?

There is, actually, no depth to which humans will not sink for a buck, whether it’s psychologists or spammers.

* That is because they were experiments cooked up by sadists, not genuine attempts to learn anything.

Regarding 30 hits of acid: that is an extreme, massive dose. I have seen people experience life-changing cognitive disruption on 2 or 3 hits. There was one time, when I was in a safe situation and place, I dropped 3 hits, and I experienced effects for several days. 30 hits is completely off the chart – I doubt FatBoy Slim has ever done a dose that massive. Ken Kesey and the Merry Pranksters did, and a lot of them were pretty severely baked; our brains are not built to handle that kind of neurochemical disruption, nowadays we recognize things like ‘Serotonin syndrome’ which are a result of permanent damage to parts of the brain as a result of over-presence of neurotransmitters. Olson probably felt that his brain was broken and would never be the same – because it was altered and it would never be the same. Someone who did not know what was happening to them would be fairly justified in choosing to end their life. It it happened to me, I would recognize the symptoms of the effect, but otherwise I’d probably assume I had brain cancer or a stroke and might put a gun to my head. There really aren’t any words for how irresponsible the CIA’s LSD program was; it was that bad.