At Dragonfly Forge, when we made the habaki for our short-swords, Michael Bell made a little cardboard “mold” for the silver. It almost instantly turned to charcoal under the heat of the silver but it slowed it down just enough that the metal retained its shape.

Casting metal is an industrial process that goes back to, well, the bronze age (at least). Most of the bronze that made the age bronzy was cast. The molds were either clay or strong sandstone; that makes sense: it’s got to withstand the thermal shock.

I was nominally interested in this stuff because I cooked up a design for a knife that I want to make, a sort of giant scalpel with a black wood handle and a great big wingnut on the end made out of solid silver. Hey, don’t ask me, it’s art, OK? I was also thinking about casting ferrules for the neck of handles, and that got me curious enough that I made one and made a mold from it using a small box full of green sand, and naturally it didn’t work because the wingnut shape is too irregular.

Please don’t think I am one of those ultra-stubborn guys who never reads directions. I am, in fact, obsessively interested in comparative safety suggestions for processes involving boiling water – let alone molten silver. When I was a kid in school I read Johnny Tremain and I don’t remember the scene where his hand was crippled with molten pewter, it was so upsetting.

Then, there were the swords.

When I was at IT-Defense in Stuttgart (Feb 6-9 2019) I noticed that the cultural museum was having a show on swords. You can’t get much more up my alley than that. So, I went and rather unexpectedly fell in love. With a bronze sword-handle. But first, I wandered around and noticed what I assumed was a pretty rare artifact: a sword mold. 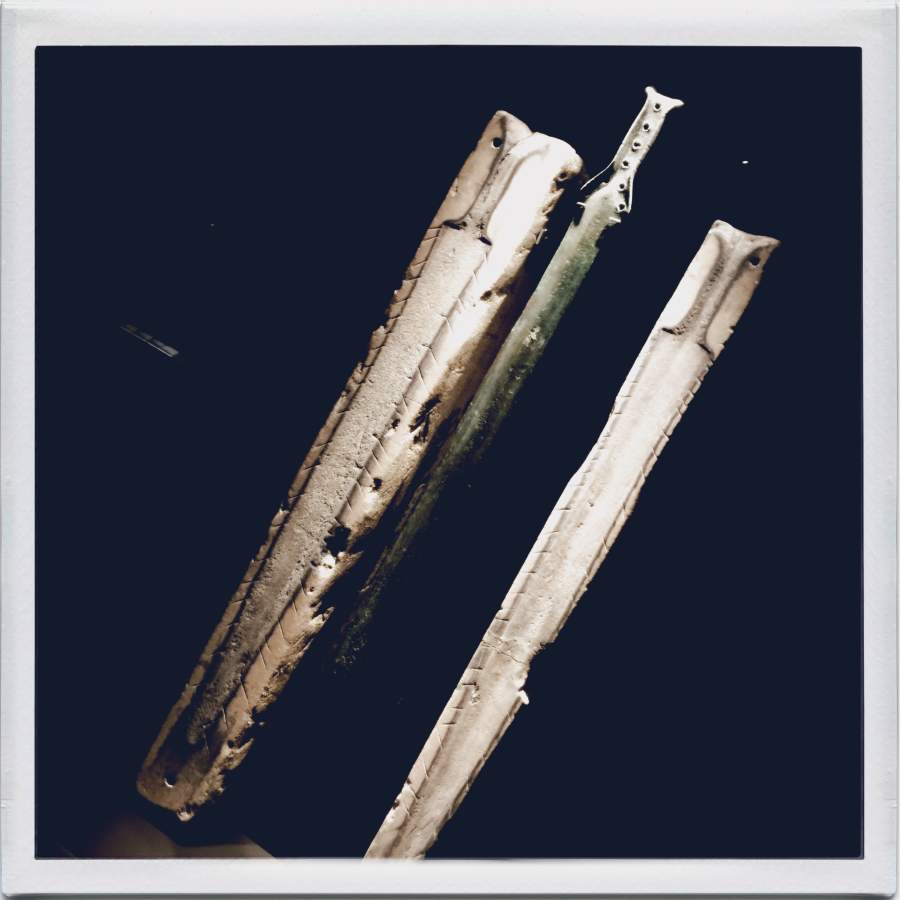 Note the cuts down the sandstone, to allow superheated air to escape without blowing the mold apart and giving everyone in the vicinity a bronze bath? I believe something like that is what happened to Johnny Tremain, too.

I felt a deep and immediate sympathy for the unknown bronze-smith of old. That mold represents some serious investment of time and skill. Looking for the necessary rock, making sure it’s dry, carving it and fitting it, then how many castings do you get from such a mold before it begins to drop in quality? And speaking of “drop” if you drop that mold you may have just wasted months of work. These things were weapons, too, which meant that the metal had to be as good as they could get it – a clean cast without a lot of dross in it. 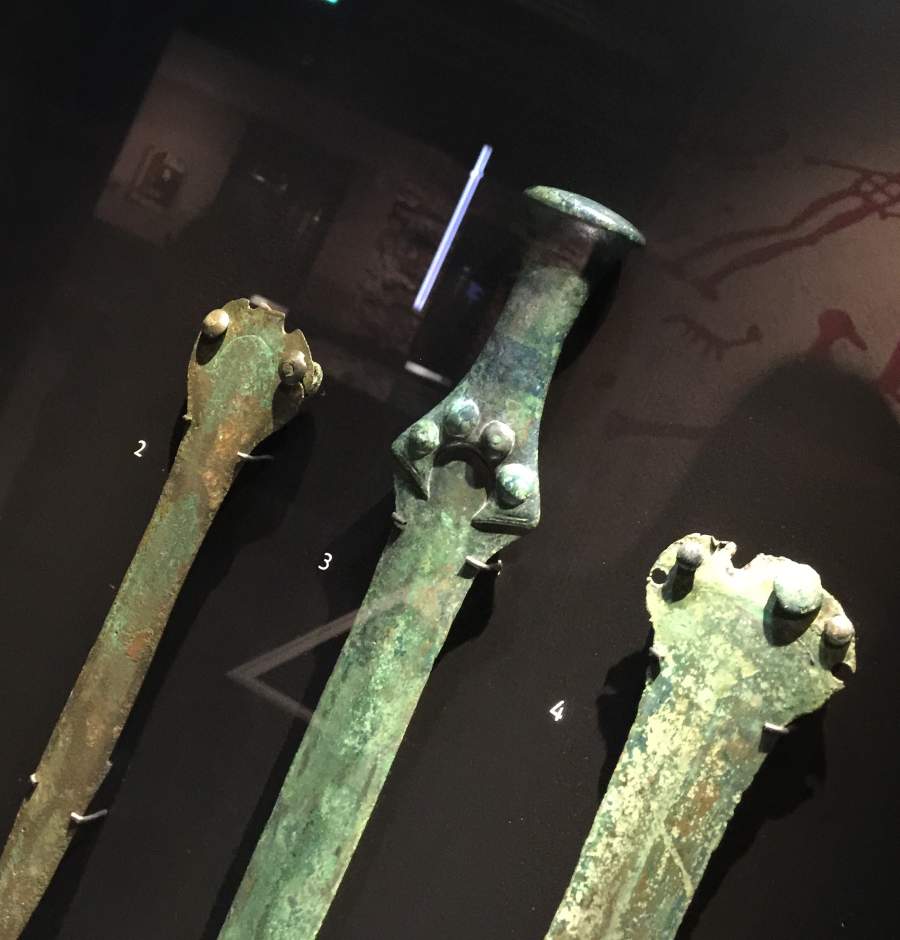 The bronze swords of the time were a pretty bad design, to be frank. The blade was held into the handle using rivets. Compare how the tang of a Japanese sword transfers the impact to the … uh, never mind. These were the swords people made when they were figuring out how swords worked. That’s not the period I am interested in. Then, I stumbled across this: 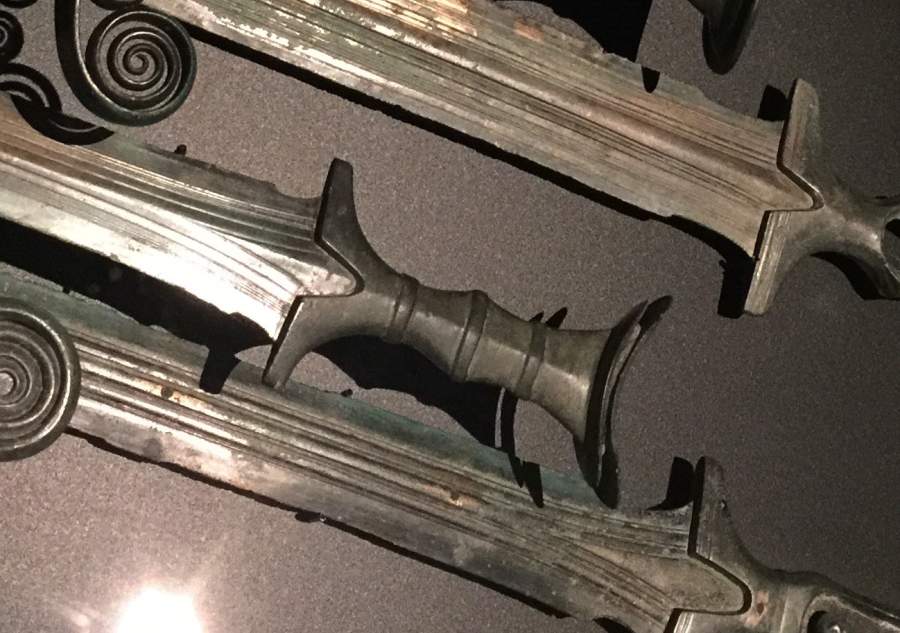 Somewhere between the first swords cast from the bronze mold, and the ones above – also bronze – a great deal of improvement happened. For one thing, someone invented the tang. It was probably just a cast-on part of the blade, but the blade and handle were now separate assemblies that had different design properties. I assume the ridges in the blade are not decoration; they are to increase its rigidity by boosting the surface area. And if you look at the characteristic notch in the guard, it’s clear that the guard also helps fit itself onto the blade and also helps support it.

I just love the shape of the center handle and I can see it with a nice damascus blade coming out, the handle made of bronze and bog oak: black and bronze-purple patina on heavily figured steel. Well, let me tell you something: the larger a casting, the more painful it is to produce. I’m still not even close to being able to make something like that but eventually, I will be. I’m aware that as the amount of molten metal goes up, so does its weight and its thermal mass – accidents get worse and worse as the size of the work-piece increases. That’s a dynamic that’s pretty familiar to me from forging blades, but at least a yellow-hot billet of steel does not try to pour itself on you. My “run away” reflexes have gotten a lot better in the last year, too.

The wingnut and the gummi bear became experimental objects that I can work on, perfect that stage of the process, and move on from. To get there, I reinvented the lost wax process. Naturally, the tools available to a practitioner today are both immediately familar and ground-breakingly better than what a bronze-age smith would have had. Today, we have heat-resistant plaster that is both tough and porous; you can pour it like plaster, let it cure, and then heat it in your oven and melt the wax until it runs into the plaster and vanishes. It happens that I do not like conventional casting wax – it’s too thick and crumbly – so I cut it with beeswax to make it flow better. While I’ve got the whole mess melted, I add a drop of cinnamon oil to make it smell nice when I’m melting the wax out.

So, I made a small mold of a gummi bear in silicone and started pouring wax. I also made a mold for the wingnut. Then, I cut some tube steel and used it as a frame for my molds (“investments”) the miracle heat-resistant plaster gets poured into the frame, around the wax gummi bear, and the wax is melted out (“lost”) then I take it over to the shop and melt some silver and pour it in. 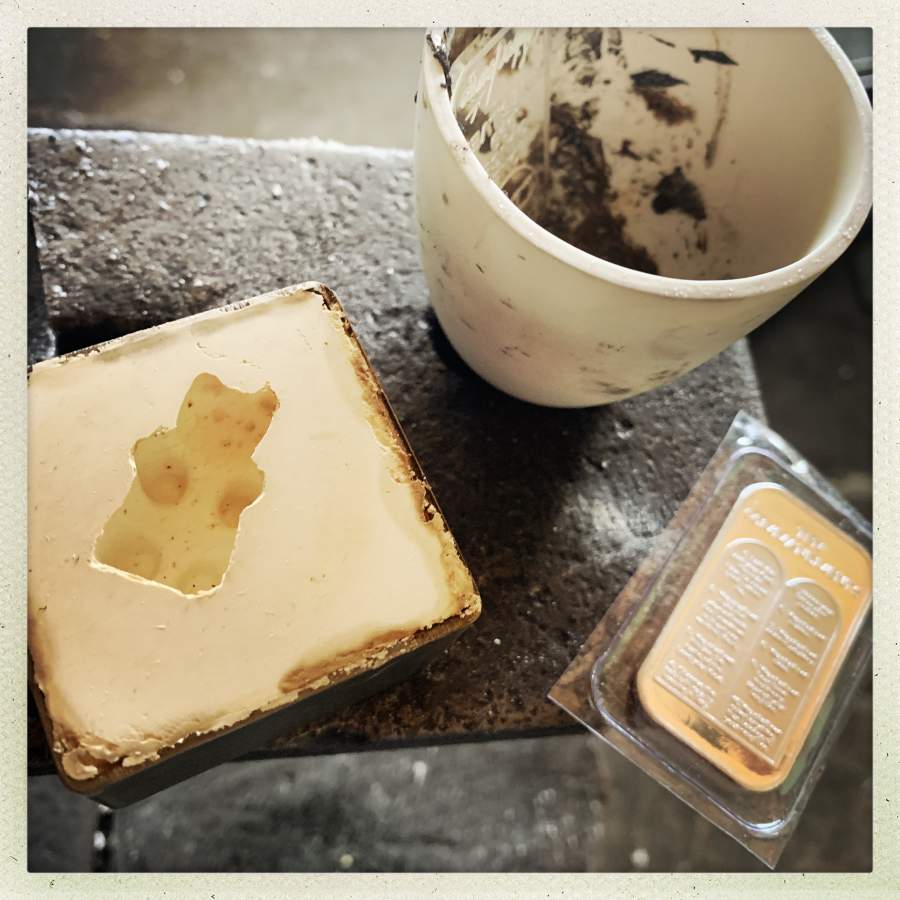 .99 fine silver is about $35 a troy ounce on Ebay; that little ingot is a troy ounce. It happens to be about exactly what a gummi bear takes. You’ll notice that I sprung for ingots with “The Ten Commandments” on them; it was somewhat satisfying to melt them down, though I wish I’d had an ingot big enough to carry the Leviticus version not the Cecil B. DeMille version of the commandments. The silver goes in the crucible and the crucible goes in the forge. The mold goes on the ground at the mouth of the forge, nestling neatly in the sand in my sand table. I make some effort to level it but, seriously, this is not a precision process. 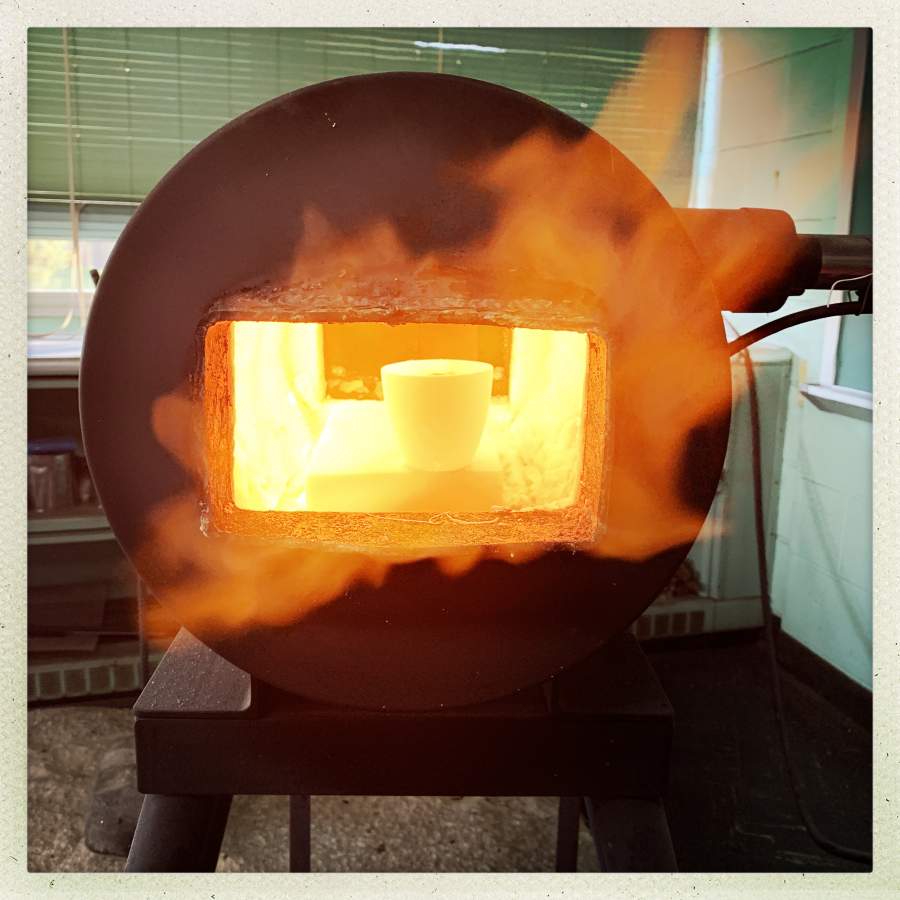 Those are not flames shooting from the mouth of the forge: that’s blasphemy happening

I’m happy about my sand table; if I spill any of that stuff, it’s going to wind up congealed in nice non-bouncy sand. To tell the truth, I did spill a small crucible-load of silver, and it ran all over the refractory brick in the bottom of the forge – the brick is covered with flux, so the silver sort of made like solder and became part of the brick. Yeah, well, it could have been worse. 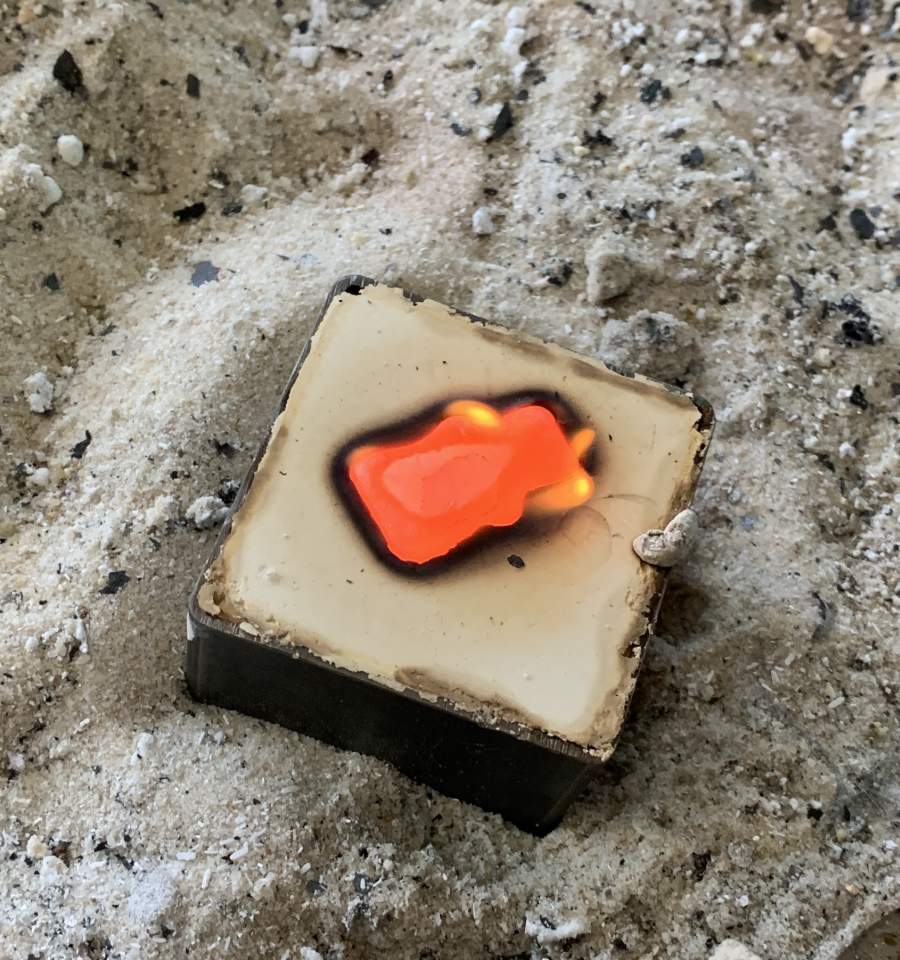 Jewelers quench the entire mold, to blow the refractory apart with the heat change. I just give it a wee tap with my forging hammer and it turns to powder and the gummi bear falls right out. From there, it’s a matter of flattening and polishing the back on my belt sander and then a surface plate with some 1000-grit and then steel wool. To get into all the crannies and stuff, there are various techniques involving sandpaper wrapped around popsickle sticks, sandpaper folded into edges, and sandpaper rolled into tight little tubes.

It takes much longer to polish and clean up my little silver object, than it does to make it (cumulatively) but I find it very satisfying to feel it once it’s finished to steel wool and buffed a bit. I left some of the texture of the casting material, because that’s also pretty cool. 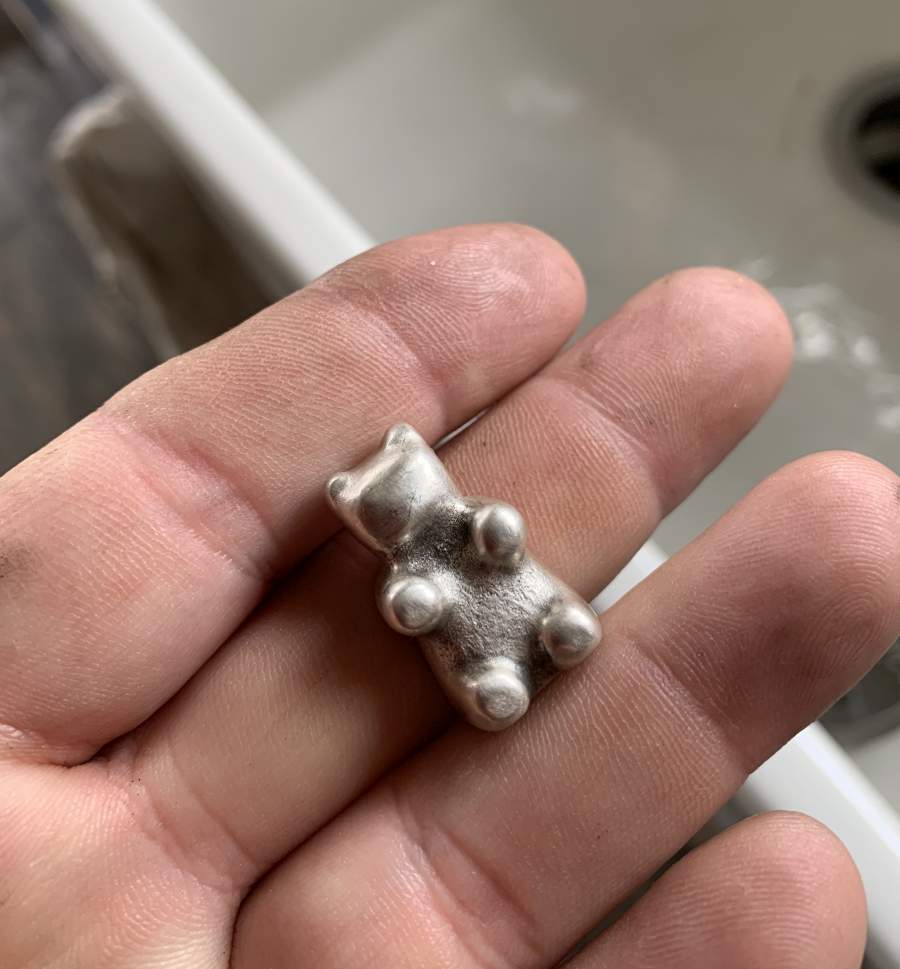 The accuracy of these casting processes is amazing. I’m sure the ancients would have loved to have silicone for making their wax models, but they (rather obviously) got by.

I know at least kestrel among you is a serious jeweler, and knows all this stuff far better than I apparently do. I’m actually farther along in my process than this posting might make it appear; this is just casual object-making. I am also experimenting with enclosed waxes and sprues and stainless steel flasks and all that. I want to see if I can make a few Fuel Rats ID coins in bronze or silver, before I start working on things like knife guards and handle pieces. There are two state of the art ways of forcing the molten metal into your mold:

The centrifugal method makes sense but I can see how it could go horribly wrong; usually when you see people doing centrifugal casting, they have a wall built up around the machine, for obvious reasons. I have all the components to build a vacuum table – I just haven’t done it yet. It’s going to take some welding and fabricating and whatnot and right now most of my fabricating energy is directed toward getting the forging shed done. I have a great big CO2 tank that I plan to use as a vacuum reservoir, which I’ll charge using a venturi vacuum generator hooked to my air compressor. From there, it’s just a couple of valves and some manifolds to assemble it. I wonder what an ancient bronze-worker would think?