The United Arab Emirates Computer Emergency Response Team (AECERT) invited me as a guest speaker at a conference in 2011. A quick search through my email database indicates that my talk was on: “Critical infrastructure protection: the relationship between terror, cybercrime, and espionage”

That was in the early days of my disillusionment regarding government’s reactions to security: all they could think to do was weaponize it. I was starting to sketch together a moral equivalence between hacking and espionage, which have now become blurred together as a tool of authoritarian state-craft. I could probably dig up my talk but it’d be depressing – it’s the same stuff I spent the last decade of my career yelling about; it turns out that militarists only see shiny new weapons and never opportunities.

I flew over business class on Emirates Air, which is an amazingly nice airline – each passenger had a private cabin with an attendant who would bring food or booze in any combination. The booze service stopped when we were an hour out from UAE airspace, so everyone could sober up. Naturally I was amused that god’s “no booze” memo only applied where it was enforced by the hand of secular authority. Religionists like to postulate these all-seeing  gods who are ignore-worthy chumps.

Deplaning, there was a Bentley waiting for me at the bottom of the jetway, and I sat in the back in exquisite comfort while the driver ran in to the customs-house (we bypassed the entire airport!) with my passport to clear me through. I began to realize that my hosts had mistaken me for being much more important than I actually am. It seemed churlish to disabuse them so I went along with it. The Bentley ran smoothly onto a closed-off freeway that allowed VIP traffic between the city and the airport. I am pretty sure I dozed off; the next clear memory I have was checking into the Ritz Carlton, where “everything is ready for you, sir” and the staff were bemused by my desire to haul my own luggage. It wasn’t much: a day bag and my black metal Halliburton briefcase, which probably screamed “spy!” to CIA fans everywhere.

Then we come to the penthouse suite at the Ritz Carlton. It was designed for someone much more important than I actually am. Someone with a retinue, or who likes to party. I was jet-lagged so I decided to take pictures of myself doing what I usually do (working on my laptop) in all the different venues around the suite. Seriously, since I exist mostly in cyberspace, I do not generally need all the amenities such as the huge living room: 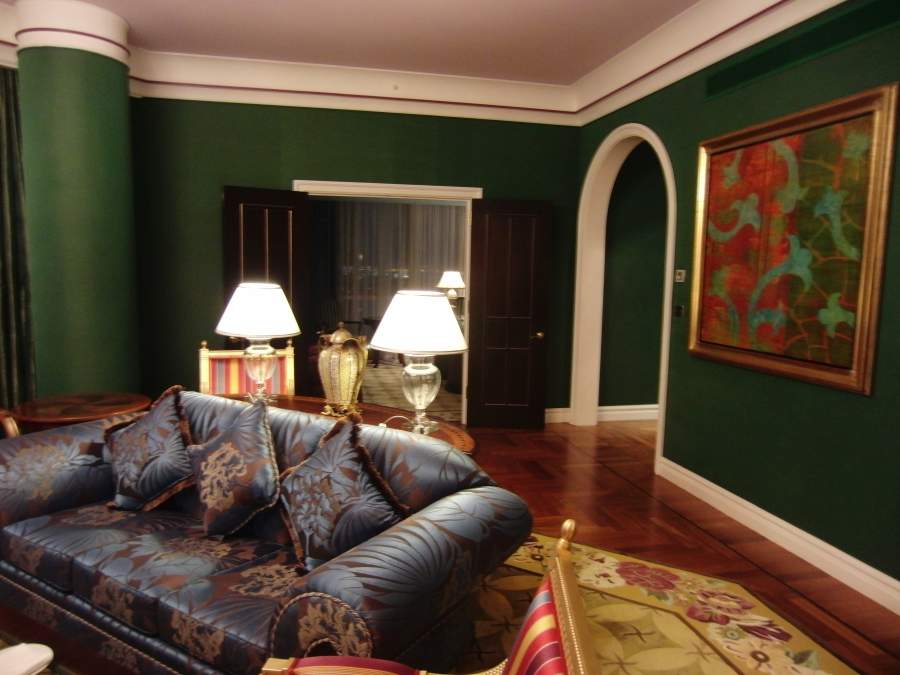 The bedroom was huge; the suite was several times the size of my house in terms of square footage. 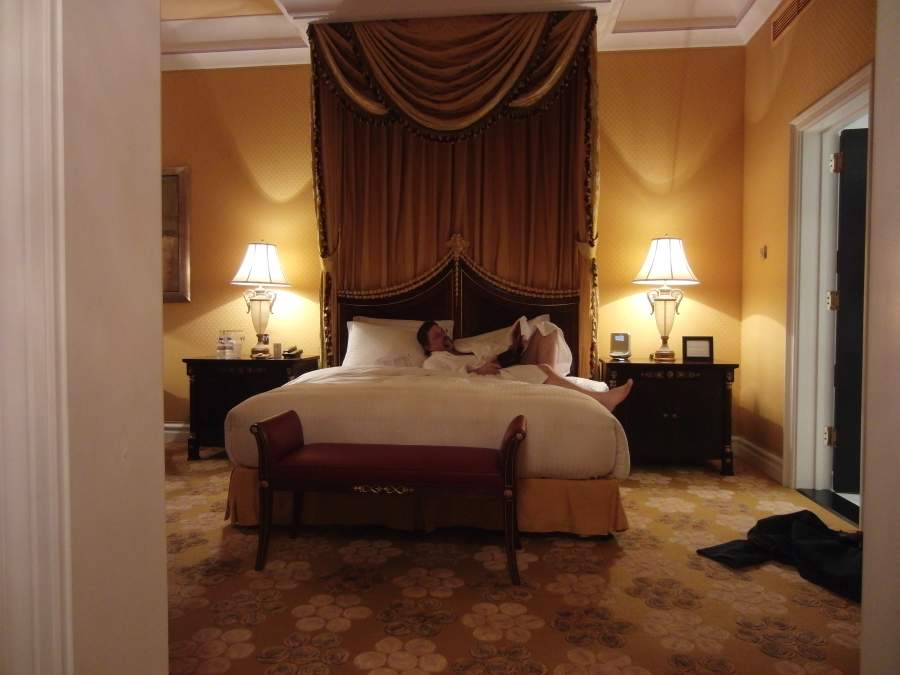 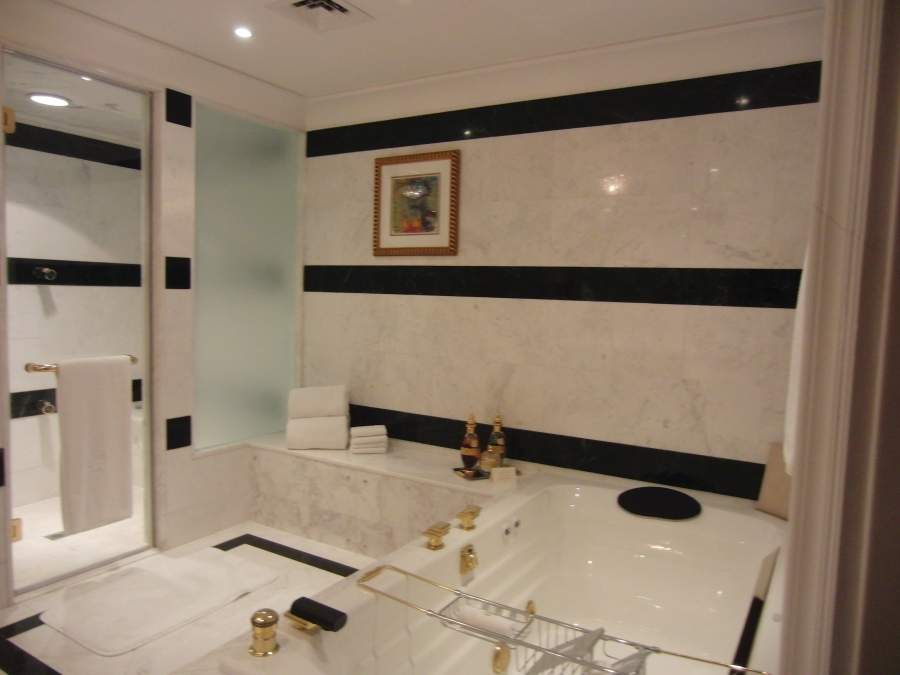 These pictures were shot with the mini camera on my Motorola Razr phone; I think it was 4 megapixels. The pictures are blurry as I felt.

The office was nice! 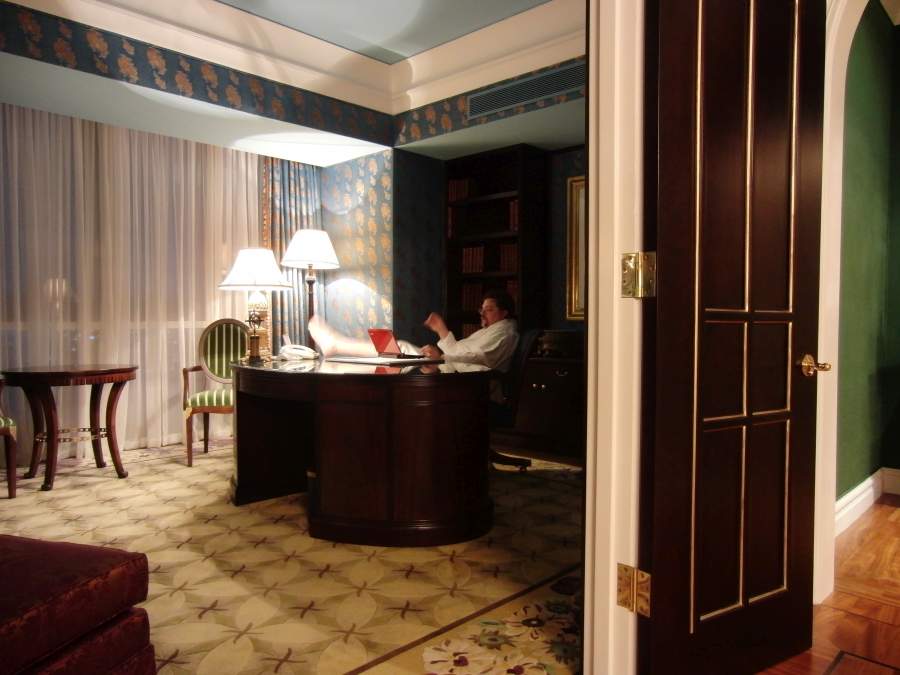 I had a dining room that seated 11, just in case. 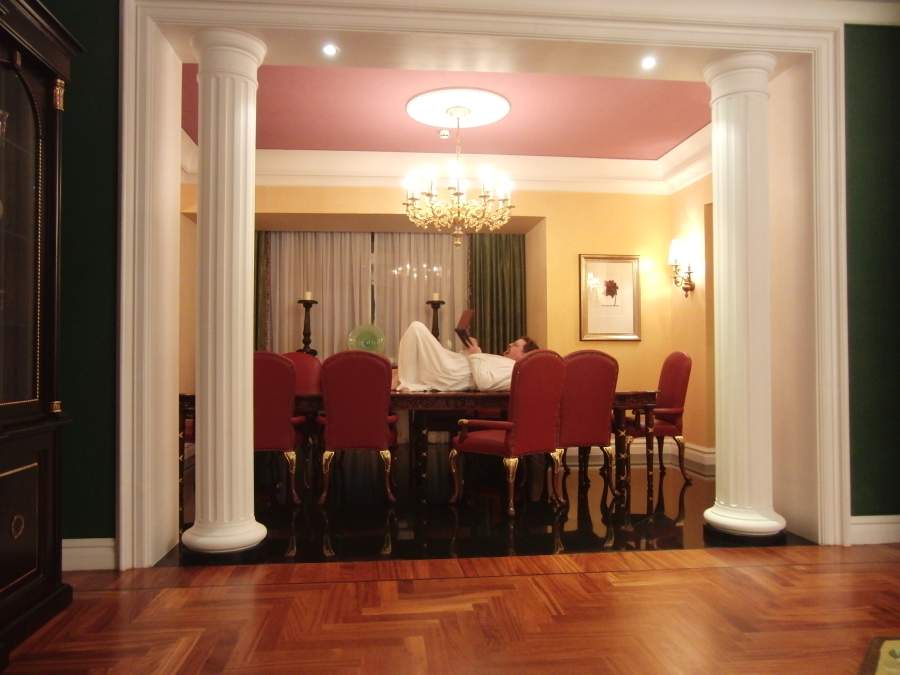 This is all well and good but I’d much prefer to have had the money that my nights in the suite cost someone. The flight cost something like $18,000 too, and I would have happily flown tourist class and pocketed the difference.

My parents always travelled like academics and bon vivants, with plenty of time built in to smell the roses. As a consultant and public speaker my life was run on a tighter schedule: I had to be there on time to do a talk or have a meeting, so I didn’t have much time other than “get from point A to point B, do the thing, then get to point C!” That meant that I was more or less immune to this sort of sybaritic lifestyle; I didn’t care if my bed was super comfy as long as it didn’t have bugs and was clean. I didn’t care if my shower was huge, just that the water was hot.

Sometimes I’d be somewhere for several days and I’d have downtime to tourist about a bit. In that case, I’d almost always head for a museum or take a walk to see what’s what. So, I saw some amazing things in Doha, I’ll admit.

The first thing that sunk in was that Doha is “Arab Disney” – there’s really not much there, so a great deal of money was spent creating an “old town” populated with “old stores” and merchants. I shot this at night so it’s a miracle any picture came out at all, but: 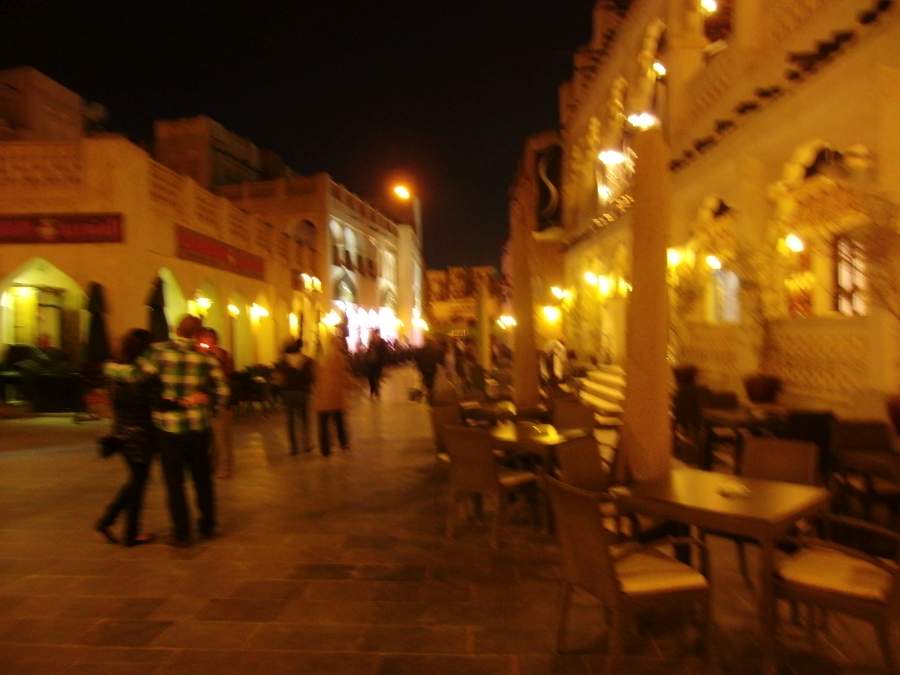 A lot of the architecture was constructed using cast concrete that had been aged. It was all high quality artifice but it was artifice, just the same. 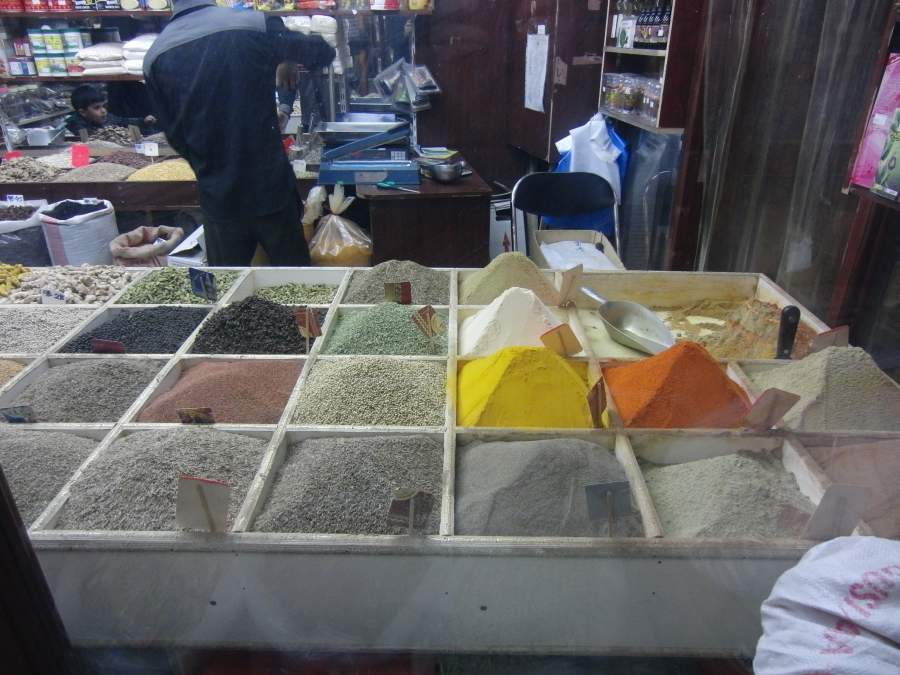 I was gobsmacked by the amazing scent of the spice merchant’s display. 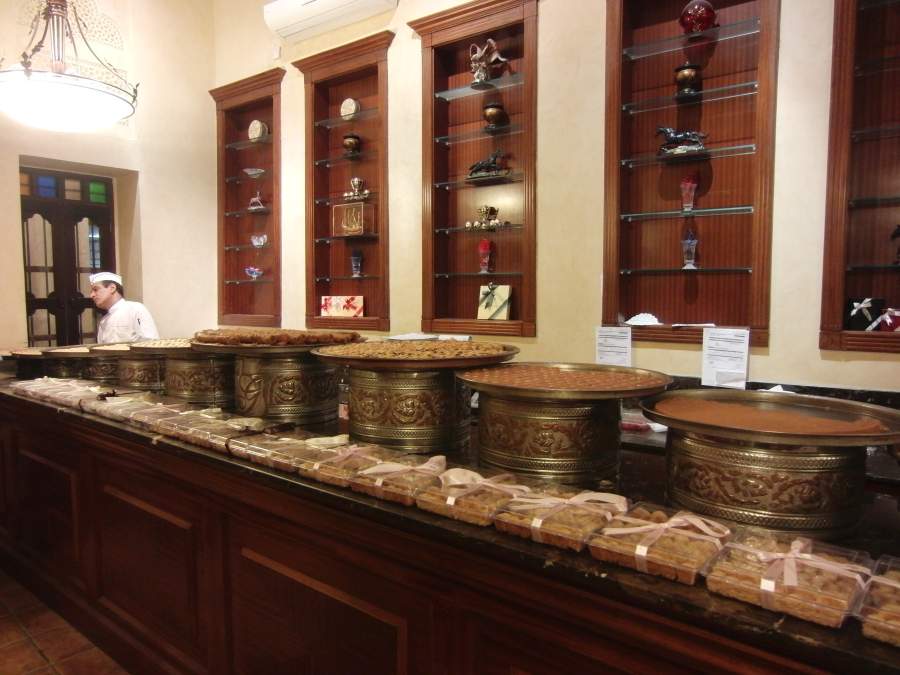 This store sold what appeared to be date pies, or pralines, or something.

My favorite part of Doha was a site that was, itself, a statement of what vast wealth can buy. The story I was told is that one of the wealthy rulers of the country decided there should be “culture” and wrote a check for a “cultural village” [wik] that would represent something about the history and culture of the place. There were also a lot of restaurants. And there was the ampitheater. I don’t remember the exact details but someone there told me that the ampitheater was made from imported stone – several massive boatloads of the stuff – cut and moved at tremendous expense. 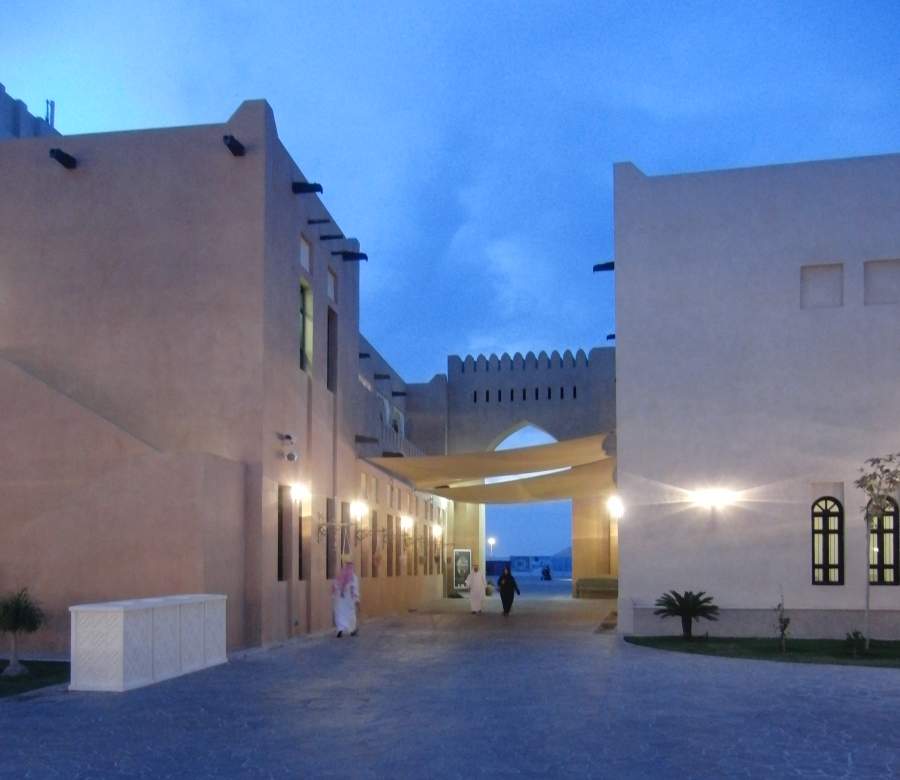 It’s a masterpiece of design. Since nobody was there I went down and climbed up on the stage, which is ever so slightly domed so that water will run off, and held a conversation with one of my fellow travelers who was all the way in the upper reaches. It’s simultaneously modern and old and it’s the kind of thing you just whip out your checkbook and write a check for, if you’re UAE royalty.

There is a really good photo (not taken with a camera-phone) on Alamy stock: [alamy] 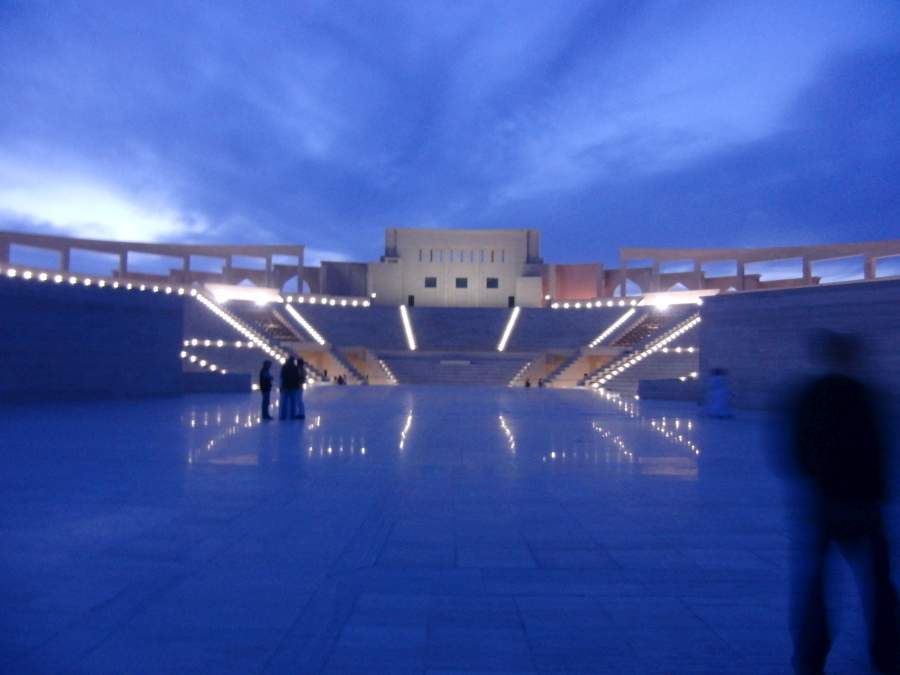 All the world is a stage and we are merely players 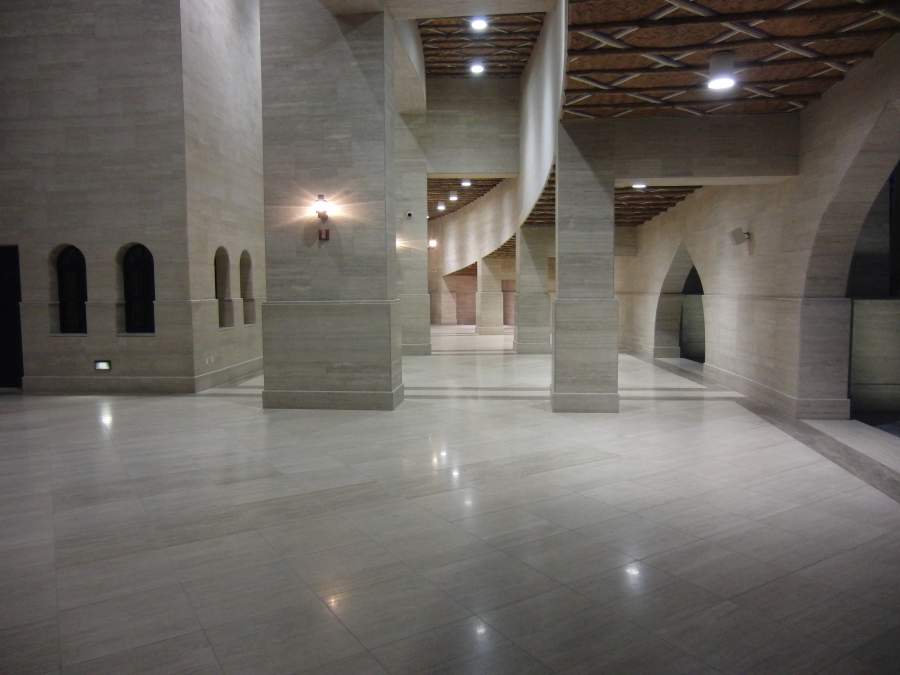 so much polished stone 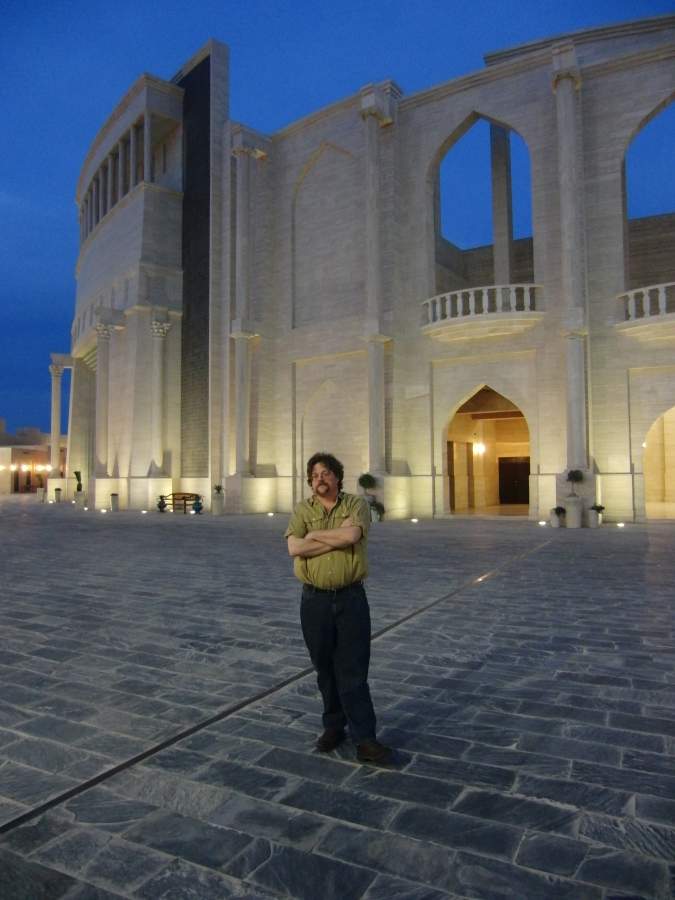 look at the tired security guy