My dad put himself through college working as a short-order cook on the Great Northern Line. One of the things that he learned in that time was impeccable timing on assembling complete meals. He doesn’t bother to do it, anymore, but I used to ask him stuff like, “ham and eggs with muffins, eggs benedict, and 2 softboiled eggs with fruit” and he’d tell me what he’d make in what sequence. (get the 3 minute eggs on the fire first then use the heating water to melt the butter for the eggs benedict, then poach them) – the stove in the cook’s car was ridiculously small, so he had to gang things together a lot of the time.

One time I asked him to teach me how to make pancakes. He said, “I can’t do that, but I can make a batch and you can watch and see what you can figure out.” Dad knew how to do it so well that he didn’t think about it, so he wasn’t interested in recalling the process to memory and turning it into a lesson. That was “work” to him. By the way, he used the same methodology to teach me how to drive: “you got clutch, brake, throttle and steering wheel. Let’s go to the parking lot at school and see what you can figure out.” 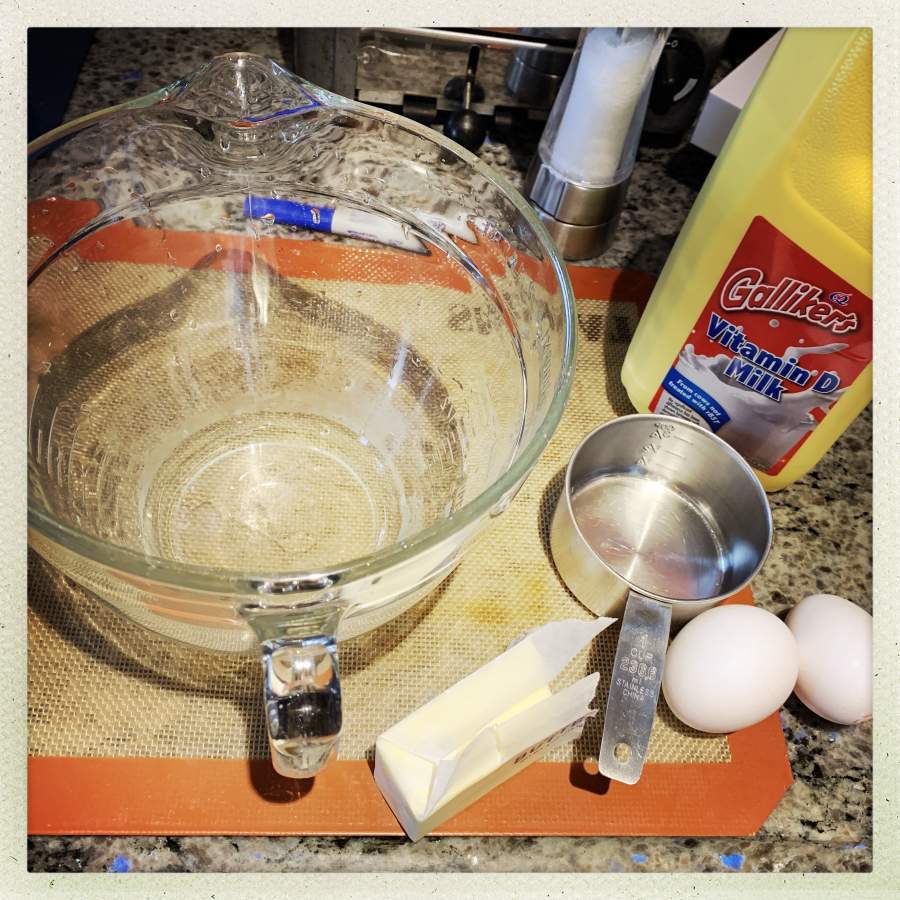 Watching the pancakes was a revelation: it seemed like he knew exactly the right amount of batter to make N pancakes reliably, and he could back from N to an ingredients list instantly. One time we were in Paris and there was a street vendor selling crepes (with Nutella!) and I asked about crepe batter. “Oh, you just make it a bit thinner with more milk, and butterier with more butter.” By then, I was an accomplished pancake artist, and I remember feeling like my head had just exploded.

Fast forward to 1997. My buddy Mike G’s wife Lynn used to sometimes make popovers for us. Damn, they were good! When Lynn began to lose her battle with a brain tumor, she wrote down her precious recipe and gave it to me as a going away present. It’s in my memory drawer. I started making popovers and it didn’t take me long to realize that popover batter is the same as crepe batter except even butterier – and, since popovers are very thickness sensitive, there’s a recommended flour (1.25 cup), egg (3) butter (3 tbsp) and milk (1.25 cup) quantity. Popovers are the original “cup cake” by the way, in the same way that pancakes are, um, “pan cake.” – There are different ways of cooking what amount to exactly the same recipe. Lynn was always super careful about her recipe being exact, but I knew there had to be a certain amount of leeway, so I started making it “dad style” – i.e.: just making the universal batter a bit buttery and a bit runny, and making it rise by lofting enough air into it with a whisk so that the bubbles would steam and the mix would expand as it cooked. 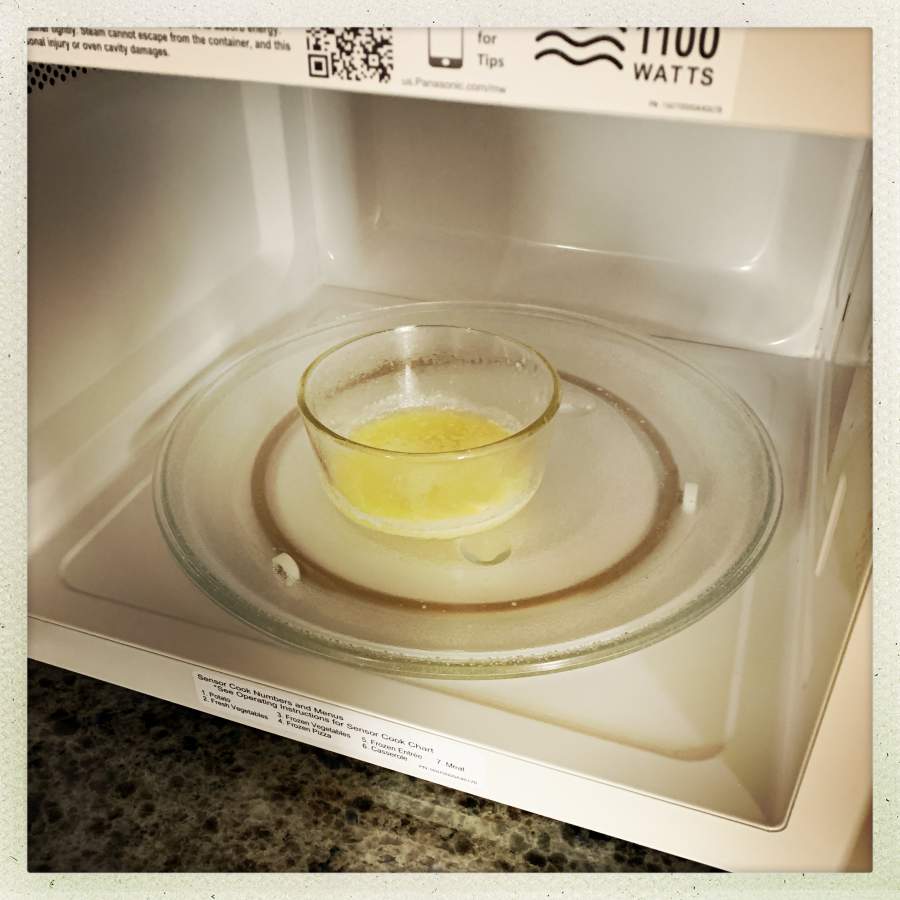 I use my microwave oven almost exclusively for melting small batches of jeweler’s wax, butter for pancakes, or defrosting frozen breads.

Making the stuff rise is another ‘mystery’ – breads and cakes can be made to rise in one of 3 ways. There are probably more (add dog fur to it?) but arguendo:

Yeast is deprecated for pastry making because it confers a yummy but noticeable flavor of its own. 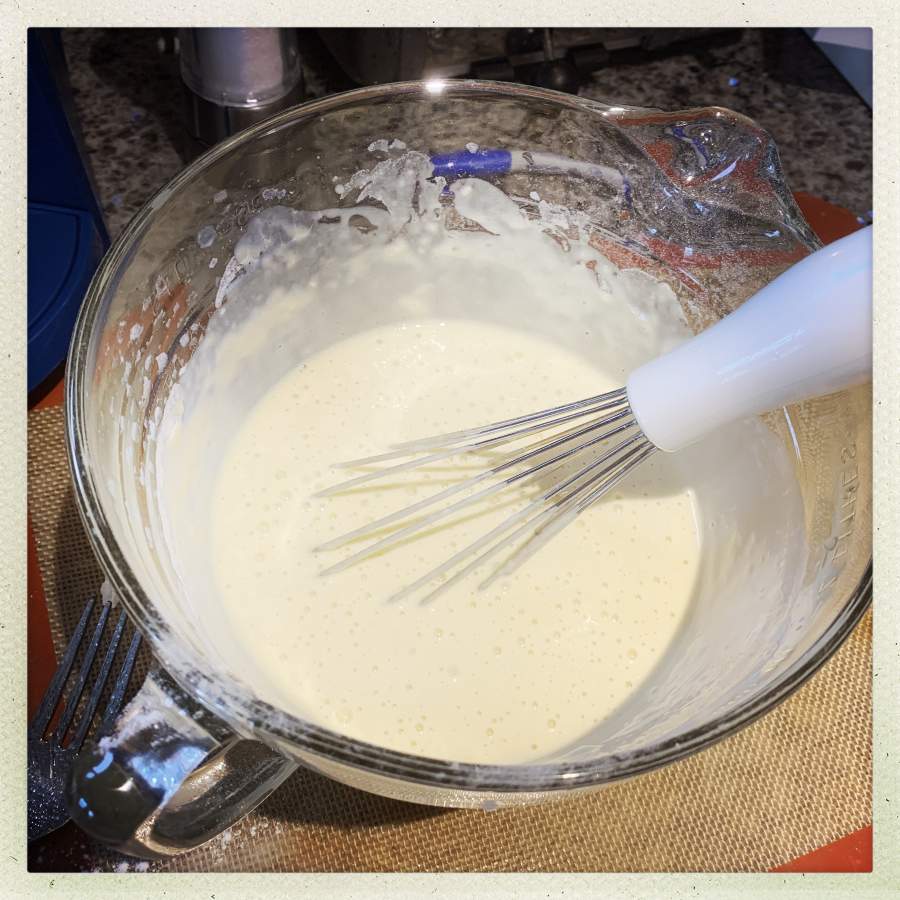 air lofted in with a wisk (and I added a bit of baking powder, sue me)

So, if you have no baking powder, you make your pancake batter a tiny bit thicker and whomp air into it with a whisk. Note the way there are lots of bubbles formed in the batter above. Those are what will make the pancakes rise or the popovers pop over. I am morally certain that Lynn’s popovers wouldn’t be harmed by a bit of baking powder and less elbow grease, but I use her recipe faithfully because it reminds me of that strange, proud, thoughtful woman (who knit like a goddess).

Plan B is you use baking soda and add a bit of dry citric acid powder to it, mix it up, and you have baking powder. You could also use a bit of vinegar but: noticeable flavor of its own. So why not use slightly sour buttermilk? The bacteria in that are pooping out CO2 as fast as they can and they’ll make your pancakes rise a bit, but you’ll get a characteristic flavor.

From here, if you’re sciency, you can extrapolate all the other options and figure out the rest. But for the sake of fun I’ll explain things more fully. 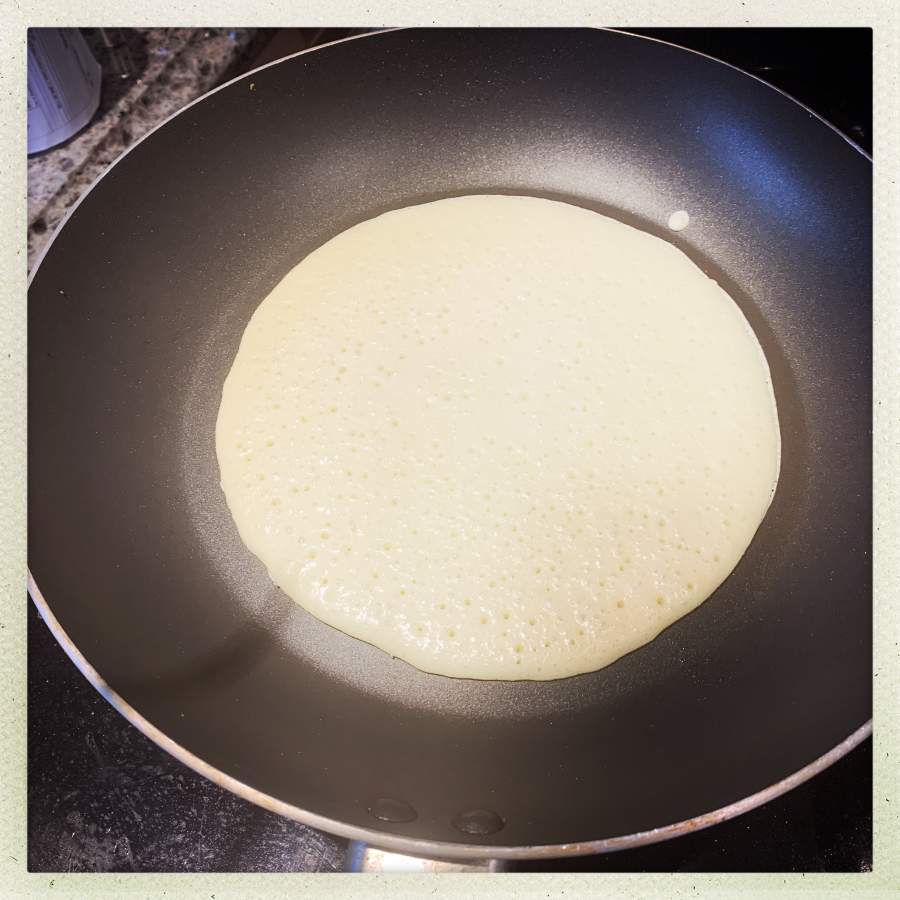 There is also the way you cook it. Pancakes are fried in a pan (cook until the back is no longer liquid and all the bubbles are popped then flip it over for a while) I’ll tell you a secret: I use silicone popover trays and teflon frying pans only for pancakes and popovers. I’m just not patient with my breakfast sticking to things. If you never overheat the teflon pans and just wipe them with a paper towel they will last for a very long time.

Back in the early 2000s a friend was visiting and gave me a waffle iron. How cool! So I made a batch of the universal (popover tuning) batter and we had great waffles. It’s all the same thing, right? If you ponder this a little while and internalize it, you are now prepared to dominate a large number of breakfast problems, effortlessly. I’ll formalize the method at the bottom of the posting; be patient.

I know people who buy Bisquick and, while there’s nothing wrong with that, I shake my head sadly because they’re buying flour and baking powder in a box. Just add the other 3 ingredients (milk, eggs, butter) – it’s not far from buying “dehydrated water: add 1gal water to make 1gal fresh water.” Biscuits are just drier pancake batter with the butter folded in loosely instead of whisked in. Cook them in a shorter cup than you’d use for your popovers and they’re muffinoids, or roll them out thickly and cut them in disks and they’re ninja hockey butter pucks. English muffins are the same thing except the hockey pucks are fried and one side is non-sticked using milled corn. You can use buttermilk for those. or butter and milk, or just butter or just milk depending on how badly your kitchen is out of supply. Seriously, though, don’t buy the Bisquick – it’s maybe a fraction of a second faster than just throwing things around and whomping them up.

And this is why I got around to this posting: 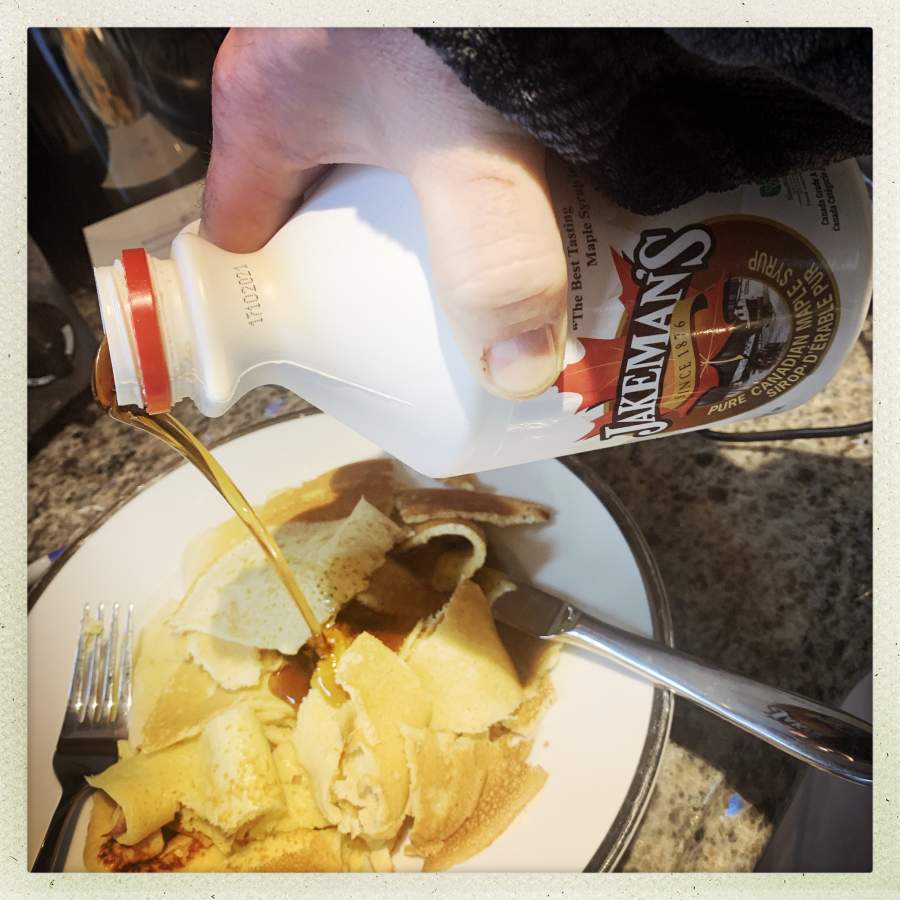 Jack’s mom, voyager, sent me a great big bottle of Canadian maple syrup! Wow is that stuff great. Voyager: a great big “thank you” to you!

Unless you move as fast in the kitchen as my dad, you need an order to combine them in, so why not put the eggs in the bowl first, add the milk, add the butter, whisk it, add the flour, and add the baking powder while you whomp it some more to loft some air into it. Pour it into a frying pan (if you are worried about it sticking you can wipe the pan with butter before you heat it) and cook as described above. The crepe tuning is: add a bit more butter, add a bit more milk. The waffles tuning is the same as the crepe tuning but whomp more air into it. Usually I pause every so often to whomp air into the batter to keep it from going flat.

I remember when T-fal teflon pans first came out. Dad was amazed and we got him a set for christmas that year (so we’d get more amazing breakfasts!) He still uses them, 40-odd years later. They’re down to the aluminum with no trace of teflon, which means we ate it all. At 86 dad is still showing no sign of teflon toxicity.

The hard part about popovers is cooking them. Start with the oven at 425 and let it heat, then put the cups and batter (well whomped) in and allow them to cook for 10 minutes. Turn the heat down to 350 and let the oven cool down to that temperature. Do not open the door. What makes a popover pop over is that basically you want the batter to boil in the cup and congeal that way. Opening the door makes the heat drop and so does the popover. Then you wind up with buttery hockey pucks.

Nutella is great but … Well, Mike G ruined it for me. He made his own once, using clarified butter instead of coconut oil, hand-roasted hazelnuts, cashew nuts, and top quality cocoa. In 2015 I made some canabutter and decided to turn half of it into canatellabutter and it was pretty freakin’ sublime except that you do not want the munchies when you’ve got a jar of Nutella and a recipe for crepes that you’ve memorized thanks to this posting.

I believe two other universal recipes are bread/pizza dough/pasta and tomato sauce. Do you know any others?