This is the state of the hot shed as of this morning. Ken and his crew have been kicking butt.

I still feel stupid every time I remember that I had some goofy idea I was going to assemble this thing myself. The arches weigh about 2,500lb each according to the strain gauge (not a precision instrument) on Ken’s crane. 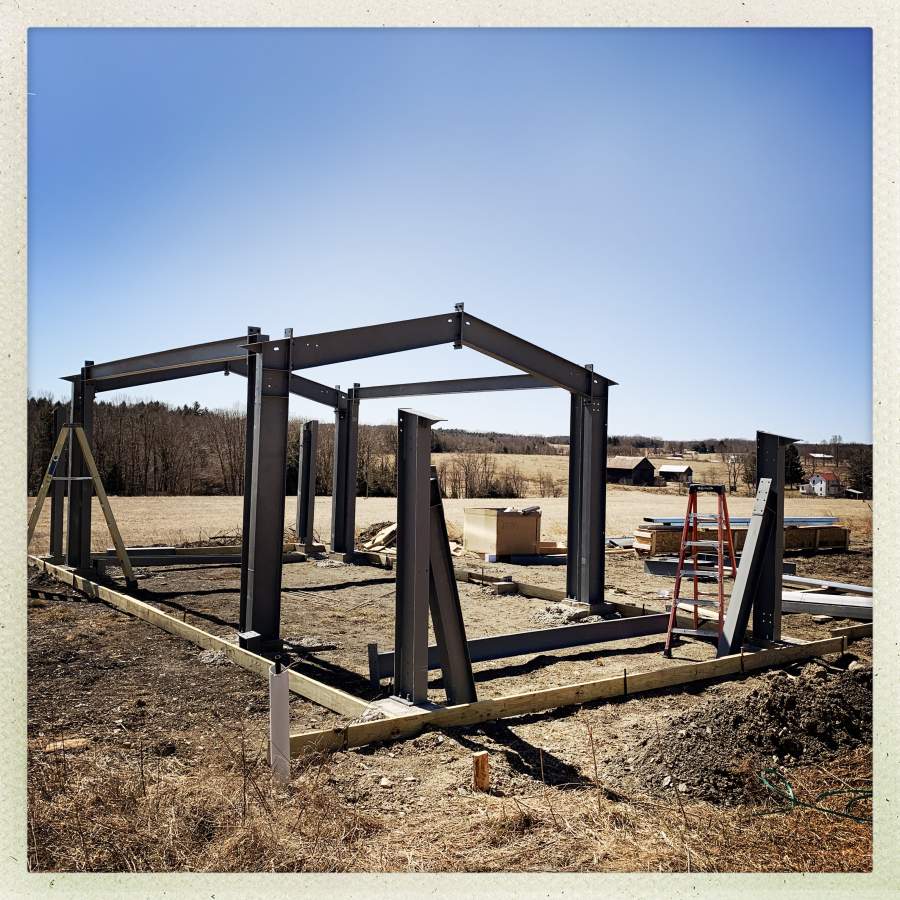 Naturally, “no plan survives contact with the enemy.” We collectively began to realize that there are some things to take into account. Since one end of the building is going to be open (that’s the side facing the field) it’s going to need a sill to keep rain out. And, since I may want to install a hammer some day, there should be a concrete block for it to sit on – I do not want a power hammer to unseat itself and fall on me. All of that means a concrete slab. That’s not a big deal (the wooden beams are already most of a form) but it means constructing the rebar cages and supports for the hammer.

Then, I got to thinking, “what about my post-vise?” Because right now my vise is on a plate which is loosely bolted into the floor of my shop; if I am pouring a slab then it makes more sense to mount the post-vise right in the concrete. I went to the fabricators in Clearfield and ordered a bunch of rebar and some 6″ square(about 130mm) tubes with plates on the bottom, that can be embedded in the concrete slab. That way I can mount anvils, post vises, buffers, whatever, on pieces of square tubing that will just drop down inside the embedded holes. I feel that is clever. It may not be. We’ll see. I talked it over with the crew, and the guys at the fabricators, and everyone agreed that it seems clever, “but we’re not certified engineers so don’t consider any of this to be official advice!”

It turns out that the steel building company is not used to building frames that have a sub-frame attached. So they didn’t take into account where the sub-frame’s angled beams meet the main frame. Observe closely: 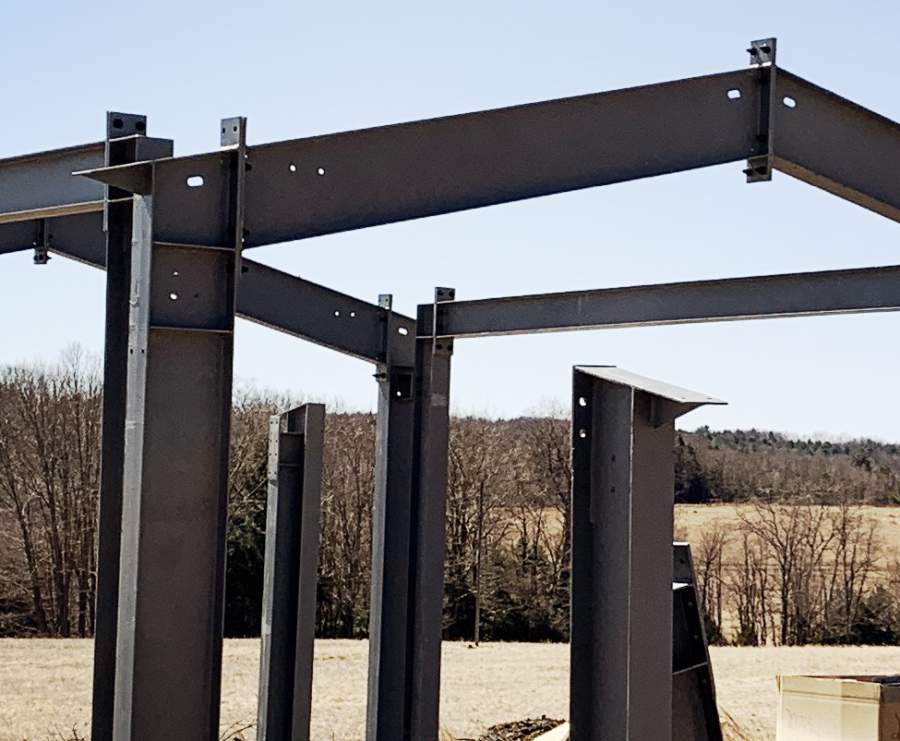 There is a pair of gussets across right where the angled roof-beam is supposed to bolt. That tells us all something about the limitations of the CAD software that the steel building company uses: it’s not very smart. This, by the way, is a great illustration of the problem of software-controlled anything: the software needs to be programmed to pick up certain kinds of errors or it won’t. That’s why Boeing’s flight control software overrules pilots, beam gussets wind up in the wrong place, and malware gets into kernel memory. Richard Feynman (I should do a posting about this) once did a fascinating talk in which he explained computers as he understood them – which was from the perspective of a Manhattan Project physicist who implemented parallel arrays of young women operating Marchand calculators. In Feynman’s talk he portrays computers as extremely fast and efficient book-keepers and tabulators that add nothing to the task except for where people have told the computer to back-check their work – which entails coming up with criteria defining correct behavior. I could, and should, go on about that topic, because defining correct behavior was my career in information security. And you can look around you at the state of everyone’s databases’ security, and see how well we do at that.

Anyhow, the steel building company is located in Easton, PA, about 3 hours from here, and apparently they have shoved a seasoned engineer with an oxy/acetylene torch into his car and he’s coming out to move the gusset. “Moving” a piece of welded steel like that means cutting it out, letting it cool, and welding it back somewhere else. An experienced welder with an oxy/acetylene torch will be able to do that in their sleep, except that experienced welders don’t let their attention wander like that. 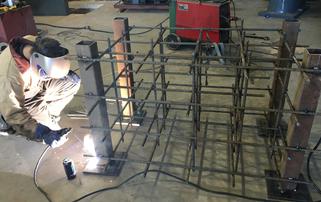 In case you’re interested, this is what the reinforcements for a hammer-pad look like, for a 133-lb hammer. The corner posts are square tube steel, with rebar welded between. A 133-lb hammer is a 3,000lb monster that, without supports, would begin to hammer its way back to its spawning-ground in China. I would not ever want to even be in the presence of something like that, so the reinforcements I’ll be doing are about half the depth and footprint. It’ll be a good chance for me to practice my stick-welding, because the rebar welds don’t need to be particularly beautiful. The floor slab will probably be about 6″ thick, and the hammer pad about 24″ thick.

Power hammers come in a variety of forms, depending on the power source. Old-school “trip hammers” depend on converting a rotational power-source (electric motor to a wheel) into an eccentric motion. They are kind of hypnotic to watch, really: 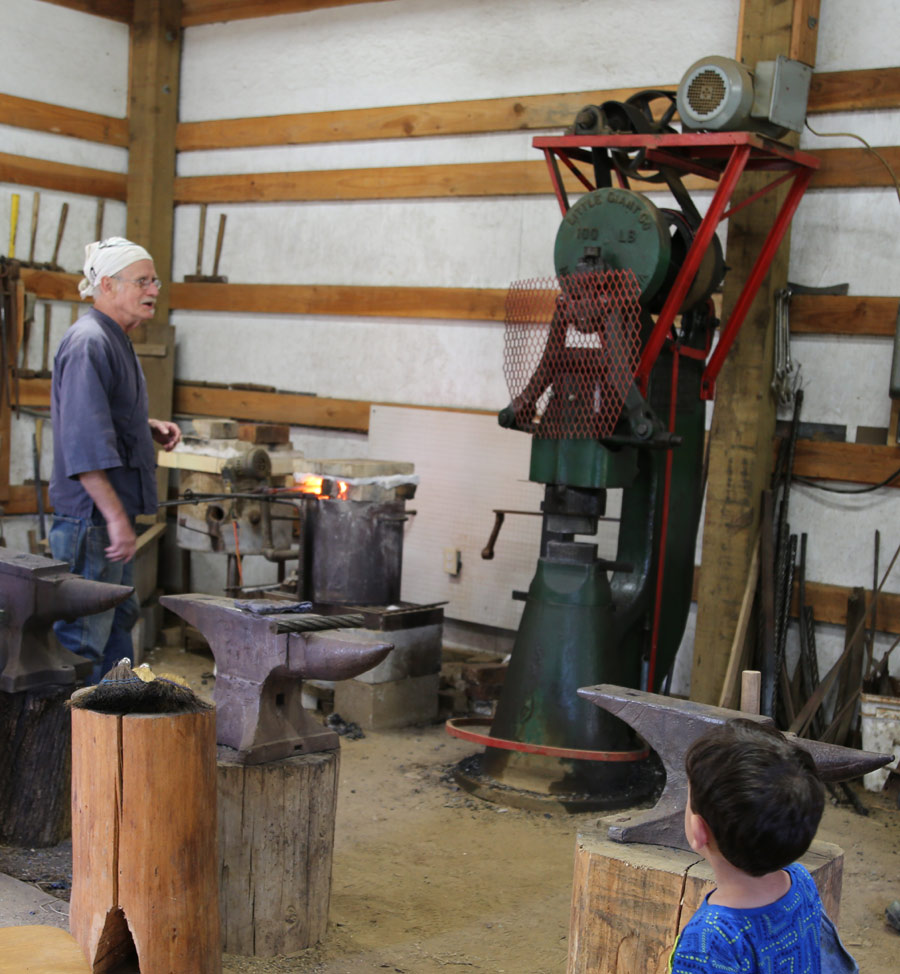 Michael Bell and the “little giant” triphammer at Dragonfly forge

As the wheel spins, the hundred-lb hammer-head bounces up and down and beats the living shit out of anything that’s under it. The great big red lever on the floor is the “go” which engages the clutch that makes the cam spin. I believe that machine weighs about 3,000lb. You can feel it operating if you’re 100 yards from the building. 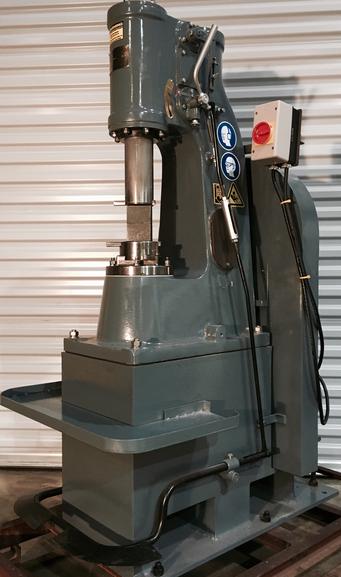 Newer hammers are air-powered and are much more reliable because the drive system doesn’t require anything to be in contact with the hammer. Basically, it’s a huge compressor that sucks the hammer-head up and down, exactly the same distance, each time.

There’s one thing that really really makes me happy about the Anyang hammers: they are not top-heavy. The pressure cylinder is hardly “lightweight” but it’s less likely to throw itself to the floor and stomp its feet. I also like how it has a skirt around it, in case something falls – you’re less likely to catch a piece of red-hot stuff on your ankle.

By the way, the “33-lb” or “100-lb” designation is the weight of the hammer, not the machine. So, if you want to get an idea what these things do, you can imagine having the Incredible Hulk standing next to your anvil, whacking your work-piece with a 33-lb sledge hammer, 250 times/minute. Things get flat really quickly in that situation. “Boom boom boom boom” as the blues guys would say.

A big difference between a triphammer like a Little Giant and an airhammer like an Anyang is that when you push the go-lever to “full” on the Little Giant, it speeds up – so it hits harder and faster. On the Anyang, the go-level controls the amount of air being driven into the cylinder – so the hammer operates at a constant rate, but you can vary it from a little love-tap to a full-power whack. That is a huge difference in terms of the machine’s reliability and safety.

Now, in the immortal words of the final scene of The Twilight Zone movie, “do you want to see something really scary?” I’m tempted to put this behind some kind of spoiler alert or content blocker because just watching this makes my testicles try to climb into my throat to hide. I’ll give you a spoiler, though: nobody gets hurt, but some metal gets really flat. What do you get when you use a turbocharged 400cubic-inch V-8 dragster engine to power a triphammer? I sometimes appreciate the safety of youtube. The scary thing is: that’s an appropriate power-source for a hammer that big. It’s nature’s way of saying “RUN!” Well, at least you get a good view of how the reciprocating effect is achieved on a triphammer. A good view, from a safe distance.

Sunday Sermon: The Mad Mullahs of Nihilism » « Does This Work On You?