Sometimes, history coalesces down to a vector – a sort of spontaneous push where a bunch of things all come together and civilization seems to be going in the same direction. That’s mostly an effect of my imagination, I fear, because when we look closer at what’s going on (or what has happened in the recent past) it decompiles into a swirl of messy social pushes in all kinds of directions that make no sense at all.

People who see the hand of god behind events are enviable, to me – they’ve come up with an organizing principle that allows them to feel that it all makes sense. Even though they’re wrong. The alternative is to embrace the tao, and to smile knowingly because you understand that it is the swirls that are life and if things made sense it would mean that trend-lines had unified and that was probably a bad thing. Not to digress but I can give you an example of that: global climate change; the trend-lines are unifying there and it’s beginning to look like we’re about to throw ourselves off a cliff like metaphorical lemmings. (Lemmings don’t do that; humans do)

This morning there were a bunch of things that I normally track, and they all pointed in weird directions – with signs reading “Dead End: Do Not Enter.” 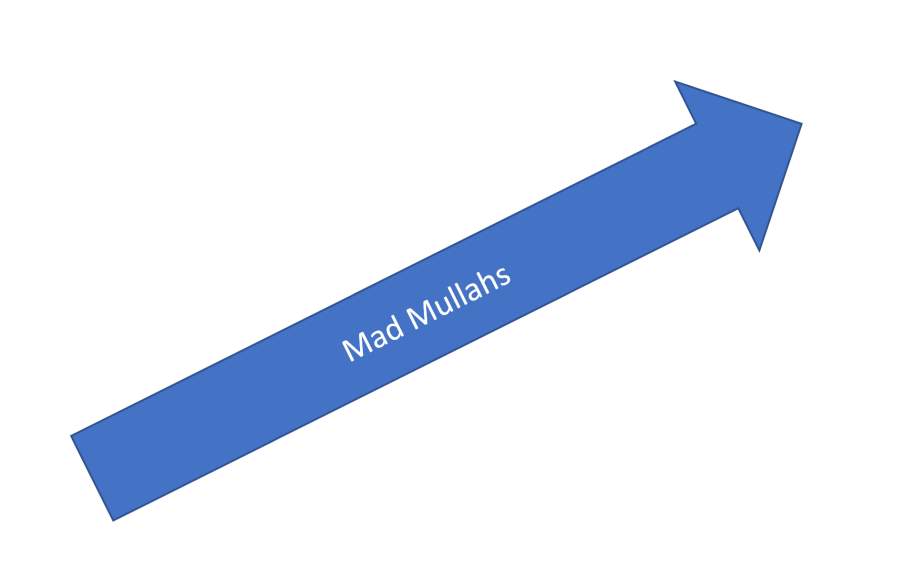 First off, we have the “mad mullahs.” Over decades I have heard the term thrown around, usually towards Iran’s political leaders. The premise is that they’re irrational muslim fundamentalists who, if they can develop a nuclear weapon, will unhesitatingly commit national suicide by trying to use it on Israel. Usually, I have heard that trope from thinkers who are shallow strategists and are just absorbing and releasing Israeli propaganda. [Is it OK to say that? Israel, like every other advanced nation, emits propaganda. I don’t want to have congress pass legislation calling me anti-semitic] At times I would try to argue against that by pointing out that Pakistan is a nominally muslim state and they’re not led by “mad mullahs”, or something. Clearly, it’s a specious argument and, like most propaganda, is not intended to make sense – it’s just there to manipulate through emotional appeal.

In the last few years there has appeared a new vector, which hasn’t got much momentum behind it, yet, but appears on the news in little pieces with increasing regularity. It actually makes sense in a way but not in another. I am referring, of course, to the “let’s give Saudi Arabia nuclear technology” vector. It seems as though there are parts of the Trump administration that have been pushing for that, for a while. Trump clearly doesn’t know anything about nuclear weapons or power other than how to pronounce “nuc.le.ar.” (Take that, George Bush!) so there’s someone else with a more consistent, deeper motivation doing the pushing. 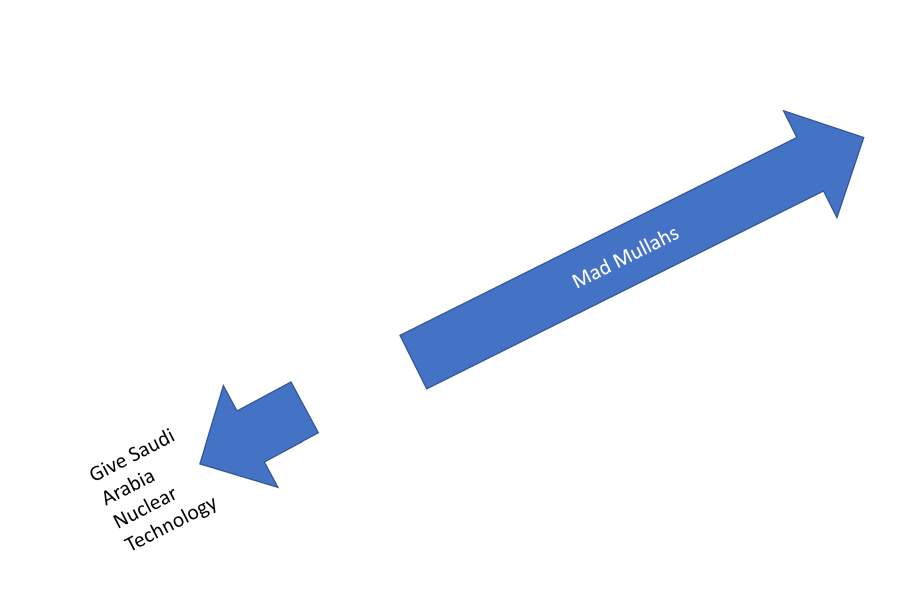 Israel has not completely freaked out about that idea, which is why I see the whole movement as not making a lot of sense. Why not? There is, no doubt, some thinking going on about this, somewhere – it’s just that whoever’s floating those particular trial balloons past the New York Times hasn’t told them what’s going on.

It actually makes a great deal of sense if you step back from the religion thing and think about it as a long-term answer to weaning away from dependency on fossil fuels. That, I believe, is the argument that the Saudis made, too; as the world’s leading purveyors of highly addictive deadly substances, the Saudis want to be able to stop using their own products because they’ve had ample opportunity to realize how destructive they are.

Israel is very, very, good at back-channel communications and I’m fairly sure that if they are bothered by this development, they will start by eventually making it clear to the Trumpists that it’s just not going to happen. I get all suspicious, when I think that, and wonder if the US is planning on just taking a whole lot of Saudi Arabian money and leaving them with a non-functional facility consisting of a lot of expensive stuff that is missing all the important pieces. After all, that’s what we (and the French) did to Iraq. A piece that has been conspicuously absent from the reporting I’ve seen about the proposed transfer of nuclear technology is what nuclear technology. Does the US plan to help build a breeder reactor and teach the Saudis how to make centrifuges for enrichment, or are they thinking of selling them pre-packed fuel rods for a reactor that can’t do anything except produce energy and which has NSA malware piled high and deep in all of its control systems? To that point: anyone who’d buy nuclear technology from the USA is, actually, probably, “mad” for all intents and purposes.

Gazing into my palantir for a while about all I can see coming is that the “mad mullahs” trope has outlived its usefulness and will be replaced by another one. That’s because it’s hard to say that “Iran is run by crazed nihilist muslims” when “Saudi Arabia are just a great bunch of people as long as you don’t turn your back on them when they’re holding a Stryker saw or let them into your flight schools.” It makes me re-think the meaning of ‘nihilism’ – it’s starting to sound more like “advanced political convenience” to me.

It’s just swirls of hypocrisy, then, and it signifies nothing. It doesn’t make sense because it’s not supposed to. Meanwhile, we’ve got transparent lies about Venezuela, and the US media has taken a face-plant in a pile of Mueller diapers. Just business as usual.

“Business as usual” is what scares me, though. Because there’s this huge vector that really matters, and that’s: 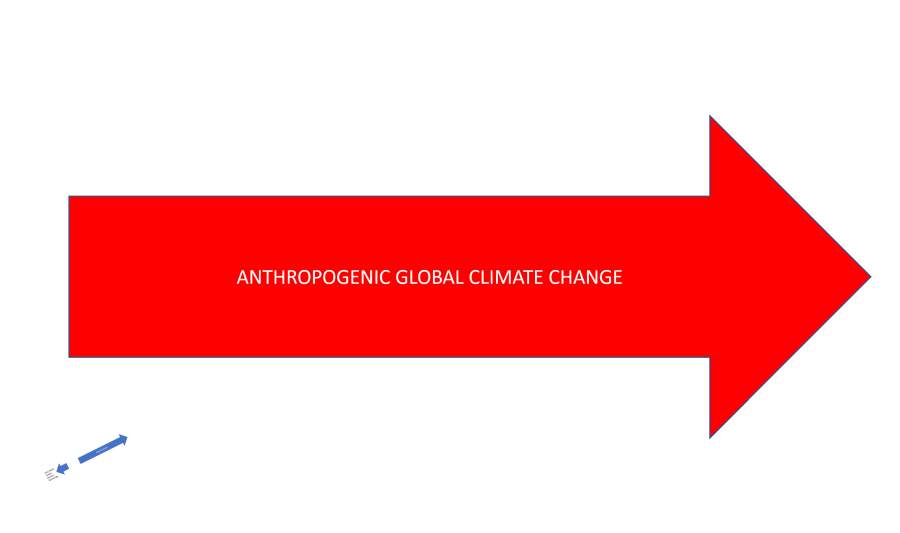 Scientists keep making predictions and the predictions keep coming true. At a certain point, anyone ought to figure out that maybe they’re right. And, since the ending position of all the pieces on the board is a pile on the floor, we collectively ought to be getting right on it. But the US, at least, is not – in fact the US is deliberately holding the rest of the world back, as well. I used to think that the reason for US collective global warming denial was religious – you know, that the US is run by a bunch of, um, mad mullahs, who believe that god green-lit every form of human stupidity after he hit ctrl-Z on the great flood.

Speaking of great floods: that’s another vector in all of this. It’s as though god is writing on the wall for all humans to see, or something. But instead we’re arguing about Robert Mueller’s report.

Some people who live along the Mississippi River are willing to do anything to keep their homes and farms safe from flooding – even if it means inundating their own neighbors. This week, we team up with ProPublica to investigate how rising waters have set off a race to build the highest levee.

Take the tiny town of Pinhook, Missouri. In 2011, the Army Corps of Engineers blew up a levee to save local farms. But in doing so, it intentionally flooded a small African American town.

It may seem a stretch, to you, that I am jamming American racism and middle eastern nuclear politics together on the same page, but in my mind they’re connected – they’re both responses to political/social resource shortage issues and political control. And, to me, racism is just as foolish as religion; to the point where I see them as practically the same thing: they’re both cases of “bad ideas with no empirical justification at all.” Religion is a made-up problem, as is racism – there were very real political and social questions that they were used as a bullshit answer for.

Keeping the water out, that’s what we’re talking about today. Who gets flooded, and who gets protected. Last year’s storms caused more than $200 billion in damage, more than any year before. Thanks to climate change, a lot more rain has been falling on the country, especially in the Midwest, where that water pours into the Mississippi River. 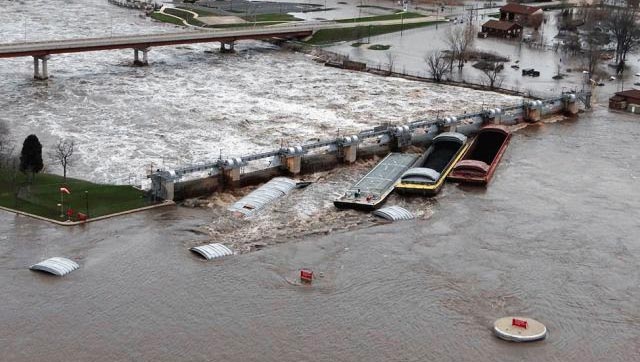 When New Orleans flooded in Katrina, the first thing I did was search the congressional record for discussions about New Orleans and levees. Not surprisingly, people had been predicting a disaster for decades; and they had been (accurately) pointing out that the defensive infrastructure was racialized. So, in 2018 Reveal was pointing out the same thing about midwestern farms. The ones that right now look like this:

This is basically what’s happening with Dan’s community and Nancy’s community. The side of the river behind Dan’s levee, they are better protected because they have built their levees higher. Those people on the other side of the river where Nancy lives, some of those communities have lower levees and some have actually no levees at all. They are at a disadvantage.

The problem with the 2018 strategy of having your levee higher than your neighbors’ is that we’re all in this together. The water doesn’t care. There’s a metaphor in that for the whole situation and it’s not hard to see it.