Right now the government is shut down because the Democrats are refusing to fund Trump’s wall, and Trump is refusing to let them push him around. 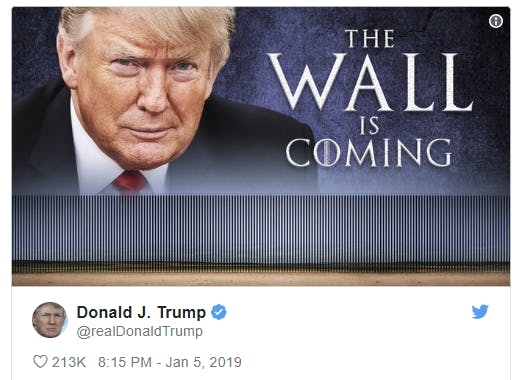 Amidst the sturm un drang of the news cycle, let me remind everyone that Trump has been in office for 2 years, now, and – in spite of controlling both houses of Congress, did not get his stupid wall funded. He did manage to pass a one-sided tax cut for the rich and for corporations, and even tacked an additional $70 billion onto the pentagon’s already inflated budget.

Just keep your eyes on the bouncing ball. If anyone wants to talk about funding the wall, you can ask “why didn’t he fund the wall when he controlled both houses of Congress? Do you think this has anything to do with his having taken a historical beating during the midterms?”

When I watch the news, it seems to me that some parts of the media are cheerfully hanging on every mistake Trump makes; that’s pointless because there are so many. Their strategy of yelling loudly about the endless little pieces of bullshit that Trump tosses off, obscures the more trenchant, obvious questions that they should be asking. Like:

When the fairly intelligent people in the media fail to ask such obvious questions, it makes me wonder if they’re serious, or if they’re also just extras in the theatrical display.

We don’t need thousands of miles of wall. We need about 100 yards, for the firing squad. And those metal slats are a good idea; bullets won’t bounce and the beams will be handy to handcuff the ci-devant to. “Would you like a final cheeseburger, Sir?” At this point, a cheeseburger one way or another won’t affect your health.

They Have Me Beat » « You’ve Got To Get An Album Out, You Owe It To The People…