The Hu are going to drop their first album in a couple of months; this is good news to anyone who likes epic metal.

An internet sensation, The Hu’s first two tracks (below) racked up millions of views very quickly, as youtube’s related item algorithm began popping the videos onto people’s watch-lists. That’s how I discovered them, and I’m happy about it.

After a few million hits on your demo tracks, it’s time to run to the studio and get an album out. NPR reports [npr]

It is something they continue to do today, says Stokes, who spoke via Skype from Inner Mongolia where she is studying Mongolian hip-hop. That hip-hop scene has a similar background. Although hip-hop is a relatively new import, Mongolians have rapidly adapted it, mixing “fierce ethnic pride and adventurous dancing” with social and political critique, according to Stokes’ research.

“Mongolians are not just taking elements from Western music and just copying and pasting,” says Stokes. Instead, they’re using some of these elements and making their own authentic music. 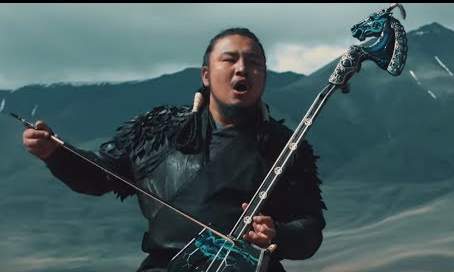 This is a “Morin Khuur” – Mongolian 3-string cello, called a “horse-head” for some reason. One of the other things that immediately grabbed me about The Hu is their fusion of modern iconography with Mongol iconography – harleys and bikers and horses in the high mountains.

I think that they were pulling the NPR reporter’s leg when they gave them this idea:

Mongolian musical culture is tied up with their pastoral way of life.

The horse was and is an essential part of what made the Mongols who they are – it’s food, warmth, transportation, and it’s a weapon. Genghis Khan’s armies were possibly the greatest and most deadly, pound for pound, in history (including the US military) – certainly the most effective. They flattened empires and wiped out cities with legendary ferocity, against massive odds. The “Mongolian badass” look is not rooted in their pastoral way of life any more than the Hell’s Angels denim and motorcycle look is rooted in their fondness for open air music events.

It is not just their instruments that incorporate traditional elements. In the band’s first song, “Yuve Yuve Yu” (What’s going on?), they mention Genghis Khan and how he was fated to bring nations together.

That is one heck of a delicate way of putting it. Unquestionably, Genghis Khan was a great man and, by the time his DNA has finished seeding itself through the population, more humans will have descended from him than anyone else – but his way of unifying nations was to utterly crush and subjugate them. And his method of being a genetic supernova was definitely non-consensual.

Definitely one of my favorite parts of The Hu’s tracks is the way they use throat-singing in their vocal array, and they combine it with heavy metal-style head banging.

Now I’ve got to find that Mongolian hip-hop they were talking about in the NPR brief.

As a life-long wargamer, I have to say one of the fantasy scenarios is Genghis Khan VS Julius Caesar. I think the imperial Romans were amazing soldiers but the Mongols would have stomped Caesar’s legions into the ground like a thumb-tack getting hit by a hammer. It’s weird to find oneself thinking “They’d out-maneuver Caesar” because that’s like imagining gravity reversing itself, but, no doubt it would have been a hell of a fight. [Note: on a battlefield it would have been more like Jebe Noyon or Subetai versus Caesar; the Khan didn’t take to the field very often and his subordinates were dynamite]

The Hu’s tracks are great music to hammer red-hot steel to.

Dan Carlin’s Wrath of the Khans series on Hardcore History is pretty good. [dc] I particularly like his explanation of how Subetai was sent on a reconnaissance mission with a very light force and came back years later having collapsed several empires and added a huge chunk of the known world to the empire.

Up Against The Wall, Donald » « Potential