Along the coast, there are dead zones, where lifeforms can’t survive because the water doesn’t contain enough air. So everything dies. This is something scientists predicted as one of the scary scenarios that would happen if global warming starts to go into a runaway reaction. 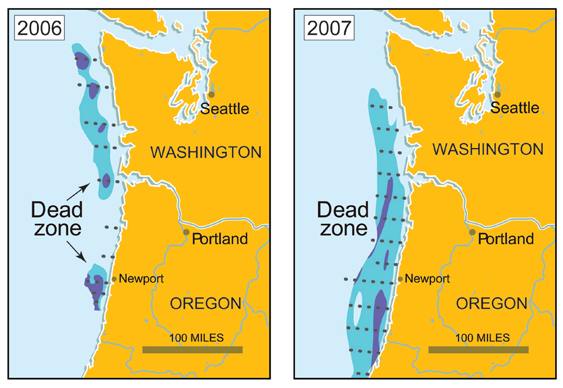 Hypoxia is a condition in which the ocean water close to the seafloor has such low levels of dissolved oxygen that the organisms living down there die.

Crabber David Bailey, who skippers the Morningstar II, is rattled by the news. He remembers a hypoxia event out of Newport, Oregon, about a decade ago. He says it shows up “like a flip of a switch.”

“If there are crabs in the pot, they’re dead. Straight up,” Bailey says. And if you re-bait the pots, “when you go out the next time, they’re blanks, they’re absolutely empty. The crabs have left the area.”

There will be other things moving in that can survive, but we won’t like them. Presumably what comes next is bacteria swarms.

“One of the more fundamental reasons is that the ocean is warmer now and warmer water holds less oxygen,” says Chan. “And then the second part is that a warmer surface ocean, it acts as an insulating blanket.” 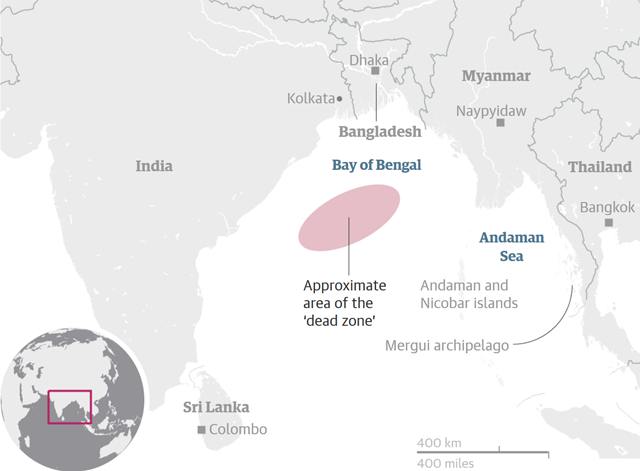 The Gulf of Mexico has dead zones and the Bay of Bengal has a huge dead zone. A very large population of humans depends on the fish there, and they are already experiencing food shortages. It’s a slow scramble but the writing is on the wall. [guard]

The Bay of Bengal’s basin contains some of the most populous regions of the earth. No less than a quarter of the world’s population is concentrated in the eight countries that border the bay. Approximately 200 million people live along the Bay of Bengal’s coasts and of these a major proportion are partially or wholly dependent on its fisheries.

Last month a multinational team of scientists reported an alarming finding – a very large “dead zone” has appeared in the bay. Apart from sulphur-oxidising bacteria and marine worms, few creatures can live in these oxygen-depleted waters. This zone already spans some 60,000 sq km and appears to be growing.

The dead zone of the Bay of Bengal is now at a point where a further reduction in its oxygen content could have the effect of stripping the water of nitrogen, a key nutrient. This transition could be triggered either by accretions of pollution or by changes in the monsoons, a predicted effect of global warming.

This years’ Gulf of Mexico dead zone is the largest ever measured. [noaa]

Previously the largest Gulf of Mexico dead zone was measured in 2002, encompassing 8,497 square miles. The average size of the dead zone over the past five years has been about 5,806 square miles, three times larger than the Gulf Hypoxia Task Force target of 1,900 square miles.

The runoff from the hurricanes is going to make it worse. There are humongous algal blooms feeding off the dead fish that have suffocated and fallen to the bottom.

When the shit starts really hitting the fan, expect a massive upsurge of religious fanaticism. And they’re going to be looking for someone to blame.