This is a true story of how I got a Message From The Swedish Prime Minister.

I don’t recall how the call came in – I think it was to Fred Avolio – but the White House public relations people had gotten themselves into a tizzy because, shortly after “whitehouse.gov” went online, someone called someone and said “the Swedish Prime Minister has sent an email to president@whitehouse.gov.”

If you’ve ever watched any episodes of VEEP let me say that their portrayal of Washington ‘important people’ is practically a documentary. The level of incompetence, hype, thrashing about pointlessly, finger-pointing, and back-stabbing is truly amazing. One of the things that VEEP represents well is how great big important situations emerge from little mole-hills because the Washington set simply cannot accept how unimportant they are. Something like the Swedish Prime Minister sending an email – it’s an opportunity for drama! For one thing, it might reveal that Bill Clinton did not sit up all night reading his emails, and that the server was not in the White House proper.

There were phone calls about what to do. In my memory, it was Fred – who tends to be much more calm than me and who was my boss – who sorted the whole thing out: Marcus was going to log into the machine and find the email. The email was then going to be printed out and FAXed to the White House Public Relations people. They were going to draft a response and FAX that back. Then Fred and I were going to type in exactly what the FAX said, double and triple-check it, and hit send. And so it happened.

There was no actual president@whitehouse.gov account on the server, because it was just an inbound email address and it was unnecessary, so I created a temporary account that could originate the response. Being fair experts at back-tracking email, Fred and I decided this was the only way to do it that would have all the correct fingerprints of an actual email from president@whitehouse.gov. The best fakes are real. 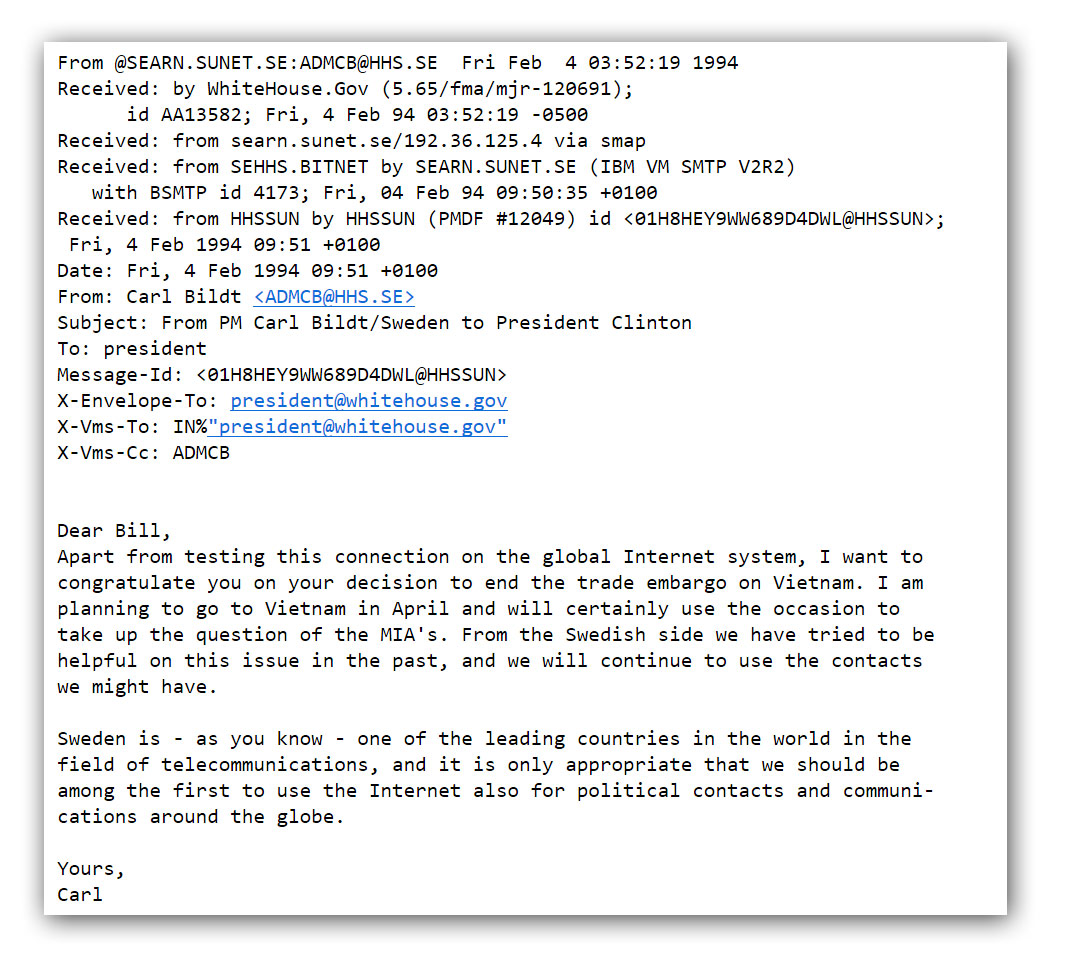 When I moved up to the farm, I threw away a lot of my old junk and I believe the FAX on White House letterhead wound up in a landfill someplace, but I may still have it. If I still have it, I know where it would be and I’ll look for it next time I’m at the shop, so I can scan it in. It was some mumble-mum about “Yes, the internet is great.” But, as you can see from The Swedish Prime Minister’s message, he was actually trying to do politics via email. Clearly Marcus and Fred were not qualified to play at this level, and neither were the White House Public Relations people, so there was authentic scrambling and hair-pulling. It was all extremely dramatic. It was all like an episode of VEEP.

Eventually, the FAX from the White House got typed in and checked, re-checked, re-re-checked, and I hit Ctrl-D, deleted The President’s login, and we went off to bed, our first experience at the front line of international diplomacy was over.

Around 2000, I was a speaker at a conference up in Sweden, and a tall, slow-moving, slow-talking gentleman came up to me during the coffee break:

Him: “Hello Marcus. I don’t think we’ve ever met but we exchanged an important email, once.”
Me: (thinking hard; important emails are not something I remember) “Uh, yes, well, that’s very interesting. What are you referring to?”
Him: “It was from a BITNET node at a Swedish University.”
Me: (By this point I was stumped) “I’m stumped. Tell me more.”

They Were Already Unrestrained » « Major Enlightenment