It’s wonderful when things out of your past crop up, if they bring good memories.

It was 1994 or so, at USENIX. A few years earlier, there was a famous T-shirt at another USENIX, “Sex, Drugs, UNIX” and I decided to blatantly pay homage (i.e.: rip off) the idea with my own riff. I think it cost $400 to make several boxes of temporary tattoos, using artwork I threw together in photoshop.

I had been talking to my friend Tina D. and we had been kicking around the idea of forming a consultancy. As it happened, we each got too busy to work together, so we went our separate ways. We owned the domain “encyclopedia.com” and “iwi.com” (this was around the same time I bought “ranum.com” and “loganalysis.com” and did not buy “whitehouse.com”, though I was the domain registrar for “whitehouse.gov” at the time…) Heady days, people were still talking about how the Internet was going to change everything for the better, bring about a more democratic society, and even cure pimples. People could write very bad code and make millions of dollars off it. It was a good time. Like a big party.

So, at that one USENIX, temporary tattoos were on everyone. 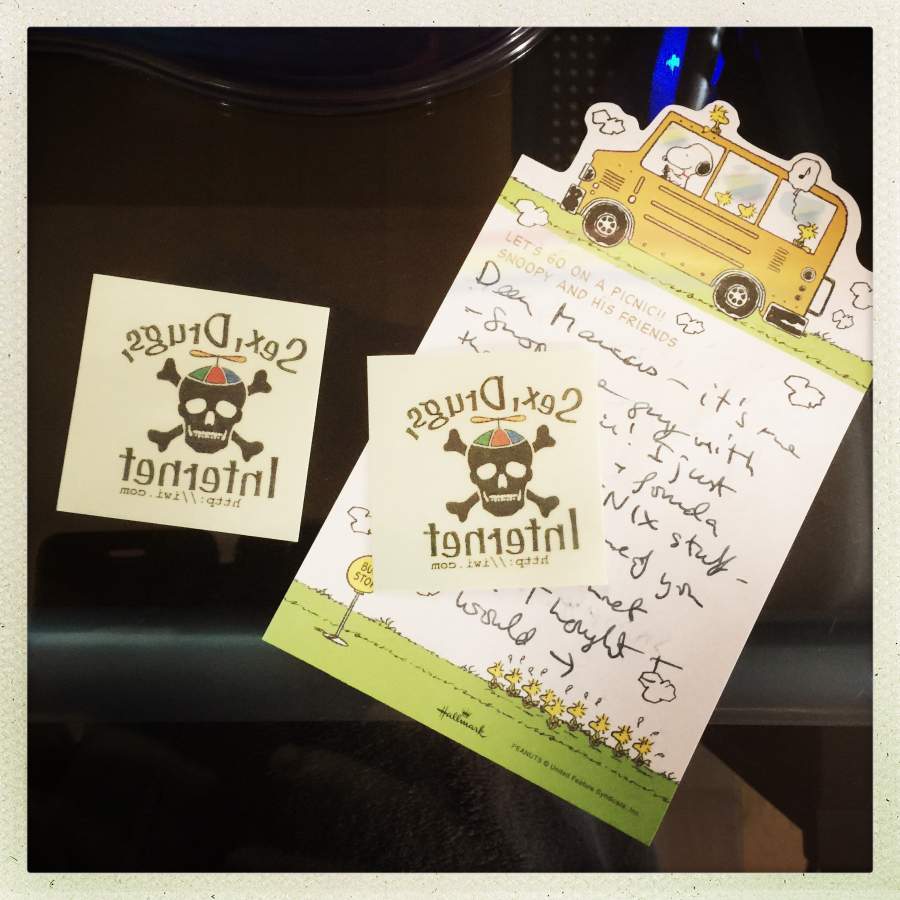 These appeared in my mail on Monday, with a nice note from someone who was there, and kept these for posterity.

The temporary tattoos marked a sort of watershed for me. I realized that I could spend not very much money and make things that were interesting, quirky, and fun – and if I spent my own money, I had no corporate master or marketing director who could tell me not to. For 20 years after that, people wore Tshirts, carried mugs, wore jackets (I had tactical “Network Police” jackets made at NFR) – one of my silly campaigns won some marketing award or other. One year I made stickers for spray cans, and bought 500 trigger-spray bottles and turned a conference into a squirt-gun fight. For a month, my garage was filled floor to ceiling with trigger-spray bottles as I slapped stickers on them, boxed them up, and the UPS guy came and took them away.

And then there were the Fuel Rats. I shipped a total of 1,240 Fuel Rats mugs (and assorted other stuff!) in 3 years. That got old, eventually, so I resigned as Quartermaster. (I.e.: “Fook this, I quitte!”)

This person does not know it, but they are about to witness the muscle-flexing mischief of the Fuel Rats Quartmaster Qorps! (Motto: “Who fuels the Fuel Rats?”) Emeritus.

I own “checkboxantivirus.com” – I just have never gotten around to doing anything with it. The idea is: with current compliance regimes, some companies are expected to have antivirus, even though they know it doesn’t do anything. So I was going to code a widget that installs, appears on your process tray, and doesn’t do anything other than connect to a cloud server, say “hi!” and the cloud server would flag your system as ‘compliant’ in a database. Who wouldn’t pay $1 a seat for an antivirus program that is up-front about not doing anything?

Bolt-Holes For The Failures » « Grave Matters of Nietzsche