Here at Argument Clinic, we are great fans of pointless surrealism. But we do not venerate it, nor do we mistake it for a learning experience.

Sadly, some elements of the atheo-skeptical community have adopted debating as a blood-sport, mistaking a form of entertainment for a means of convincing people. In order to understand this, we need to review a bit of history: in the early oughts, there were several atheist/skeptics that stood forth prominently and were recognized as spokesmen. These men were not simply well-educated in the sciences, they had some skills at rhetorical pugilism – and they were willing to use those skills to poke holes in religion. It’s all good fun; after all, watching Steven Fry and Christopher Hitchens reveal a group of churchmen and ultra-conservative parlimentarians as fools is far more exciting than pulling the wings off of flies. There were, naturally, debaters on both sides – so you could watch the wretchedly pseudo-intellectual William Lane Craig say the same things he always says (now that’s a thrill!) or see Ken Ham assert once again that, yes, he really believes that stuff. In the early excitement of seeing atheism pound on the faithful, many atheists and skeptics appear to have forgotten that debates don’t teach, reach, or inform – they’re just a battlefield for rhetorical strategies. But the habit was formed: it became fashionable to challenge one’s opponent to a debate, like some kind of intellectual cage-match.

The difference is that a cage-match actually might decide something (who is the best at controlled violence) whereas the debate does not; debate allows us to see who is better at rhetoric and debating, it doesn’t help us get at the underlying truth of anything, really. Suppose one of you wished to debate the staff here at Argument Clinic, regarding a particular point of technique – even if you triumphed (as you well might) it doesn’t show that you’re right or wrong – it just shows whether or not you are a better debater. We recognize that within our very own commentariat ™ we have high-level verbal pugilists; we would be hesitant to debate them under any circumstances even if we knew we had truth on our side.

Ken White (popehat) once did an article about speaking to the FBI and being one’s own attorney [pope] and it contained some profound words of wisdom that rocked our crooked little world:

This is not a casual conversation about who took a bite out of the roll of cookie dough in the fridge. This is serious complicated stuff, and your whole life hangs in the balance. Platitudes aside, going into a law enforcement interview armed only with the attitude “I’ll just tell the truth” is poor strategy.

No offense, but you may be a sociopath. If the FBI wants to interview you, it’s possible you’re some kind of Big Deal — a politician or a general or a mover and shaker of some description. If you’re kind of a big deal, there’s a significant possibility you’re a sociopath. You really don’t know how to tell the truth, except by coincidence. You understand what people mean when they say “tell the truth” but to you it’s like someone saying you should smile during the interview. Really? Well, I’ll try, I guess, if I remember. You’ve gotten to be a big deal by doing whatever is necessary and rather routinely lying. It may be difficult for you to focus and remember when you are lying because lying feels the same as telling the truth.

White could just as well be explaining why some people want to debate: they realize (consciously or otherwise) that they can browbeat an opponent and score points against them that are irrelevant to truth – or, they want to be in the audience while someone gets such a verbal ass-kicking. Wishing to see a bloody-knuckled debate ought to be a warning sign that there may be something wrong with your philosophical education. If you watch a heavyweight boxing match, there is one truth that may emerge: who is the better boxer. If you watch a debate about a matter of philosophy, the only truth that can emerge is: who is a better debater.

Now we come to “The Tedious Part of The Piece Wherein We Offer Advice”: If you think that a debate is a good way of getting your point across, you may be a sociopath, because you almost certainly cannot be a lover of the truth.

Here is how lovers of the truth debate: they marshal facts to support their opinions, and hold the whole mass together with ropy layers of analysis. Most importantly: they attempt to communicate clearly, and they are not afraid to expose their analysis and ideas to the test of time. 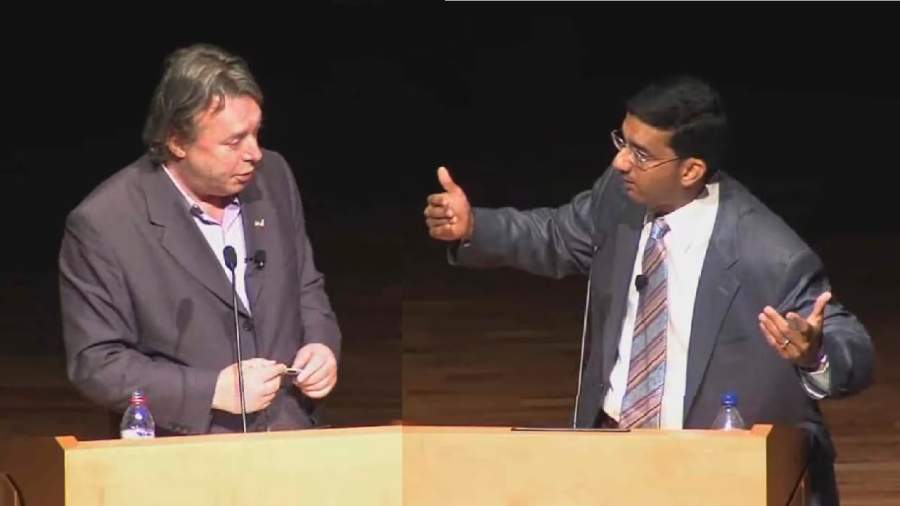 If you are familiar with the “Gish Gallop” – [wik] that is the antithesis of an honest attempt to clearly communicate analysis and fact. It is, in fact, an attempt to obscure fact; which is a technique that often serves a debater but never serves a scientist, or a skeptic. Let us be more clear: if you are saying “you should debate so-and-so” you are saying, in effect, that people’s mere opinions may hold sway over matters of fact, and you are comfortable encouraging scenes in which that can happen. When a skeptic says this, your first response should be something like:

Skeptic on Youtube comments: PZ Myers should debate Jordan Peterson!
Argument Clinician: Ah, so you’re not concerned with truth, you’re just interested in watching some people exchange bruises?
Skeptic on Youtube comments: What do you mean!? If PZ knows what he’s talking about, he’ll destroy Peterson!
Argument Clinician: No, because such a debate is not a serious exchange of ideas, it’s showmanship. You’d learn as much if PZ challenged Jordan Peterson to a hot-dog eating contest; what you’re learning in such a debate has nothing to do with the merits of the ideas and everything to do with the rhetorical skills of the proponents. You don’t appear to be interested in honest skepticism, you’re acting like one of those ‘political correctness’ goons who believes that truth is subject to the pressure of opinion.

Another way of approaching the “you ought to debate someone” meme is this:

Skeptic on Youtube comments: You ‘Argument Clinic’ snotheads ought to debate Jordan Peterson. He’s more “meta-” than you and he’d demolish you.
Argument Clinician: He’s not a serious debater. If he were a serious debater, he’d seek an exchange of ideas in a reviewable forum – one where his ideas have to stand the test of time and independent analysis. He is, in fact, probably afraid of that, since the lectures of his that I have seen seem to be a rapid assertion of a lot of labels and umbrella-concepts that he leaves undefined. It’s pretty clear that he’s doing a pseudo-intellectual’s “Gish Gallop” – why would we wish to subject ourselves to that? That’s like being invited to clean someone else’s stable – I’ll just get sweaty and dirty and in the end, it’s still going to be a stable.

Further, you can point out how the Serious People do it. They seldom bother debating: they write a book. James Baldwin famously debated William F. Buckley Jr, but he wrote his argument in book form, first. He could have walked up to the podium and asked Buckley, “did you read my book? No? Very well, then I shall have to give you a synopsis.” When Bruce Schneier debated Sam Harris, Bruce did his research and realized that Harris was fond of claiming to be taken out of context, so Bruce agreed to do it only if Harris’ views would be recorded in Harris’ own words, for outside analysis. The end result speaks for itself – Harris comes off very badly, because as he begins to write down his thoughts, it becomes apparent that they are thin, indefensible, and uninformed. [schn] Harris has no opportunity to say he is being taken out of context, or to try to cherry-pick his facts, because it’s all there in black and white. Bruce is a gentleman, too, and has refrained from referring back again and again to Harris’ arguments, picking them apart with tweezers – he already won because he has awkward facts on his side. Another Serious Person who does not “debate” is Noam Chomsky. Chomsky will, also, engage in public back-and-forth exchanges, where he presents his best argument, and his ‘opponent’ does likewise. Chomsky’s pretty good at the rhetoric, too, but well enough that he knows those tricks and does not wish to subject himself to them. Glutton for punishment Sam Harris ‘debated’ Noam Chomsky, as well, which was a fascinating performance – Chomsky kept consistently saying the same things he has been saying since Sam Harris was a child, and Sam Harris thrashes around making a lot of noise and trying to score rhetorical points that might have worked in a live debate but look obvious when written down. [har]

We suppose we could offer Sam Harris as an example of why nobody should wish to debate a serious topic, but Harris probably thinks (as Ken White says) that he’s kicking his opponents’ asses. He just doesn’t understand why people keep taking him out of context and laughing at him.

Let us put this to you from a final angle: imagine you were invited to debate with Christopher Hitchens. We used to enjoy watching Hitchens debate, but – would you willingly subject yourself to the interruptions, the glibness, the digressions?

How does debating get at some deeper truth? It’s an inefficient way to convince anyone of anything.

“… they are not afraid to expose their analysis and ideas to the test of time.” – We added that bit specifically as a forward-hook in case we needed to discuss William Lane Craig or Dinesh D’Souza – two characters who use the same arguments over and over in spite of the fact that they have been adequately refuted years ago. That’s not intellectual honesty, that’s trying to carry one’s point through vigorous repetition, i.e.: it’s propaganda. If you are ever challenged by either of those characters, you should reply that you’ll be happy to discuss your opposing views with them, in writing, but not if they intend to simply present the same refuted arguments they have been relying on for the last decade. Scientists learn and update their views and hone their arguments, they don’t just keep referencing the Kalam Cosmological Argument, which has been taken to pieces over and over again since the 11th century. The analogy we gave earlier, to cleaning a stable, is apt: no matter how often you clean a stable, if it’s got horses in it, there’s more shit to clean up.