In the course of attempting to identify an apparent dish-like object in a photograph from WWII, I did a confirming search for “Japanese anti-aircraft radar.” That led me over to “early aircraft detection systems” and some really interesting pictures out of what look like steampunk-land. [source]

Child: “What did you do during the war, daddy?”
Father: “I wore a strange thing on my head all day.” 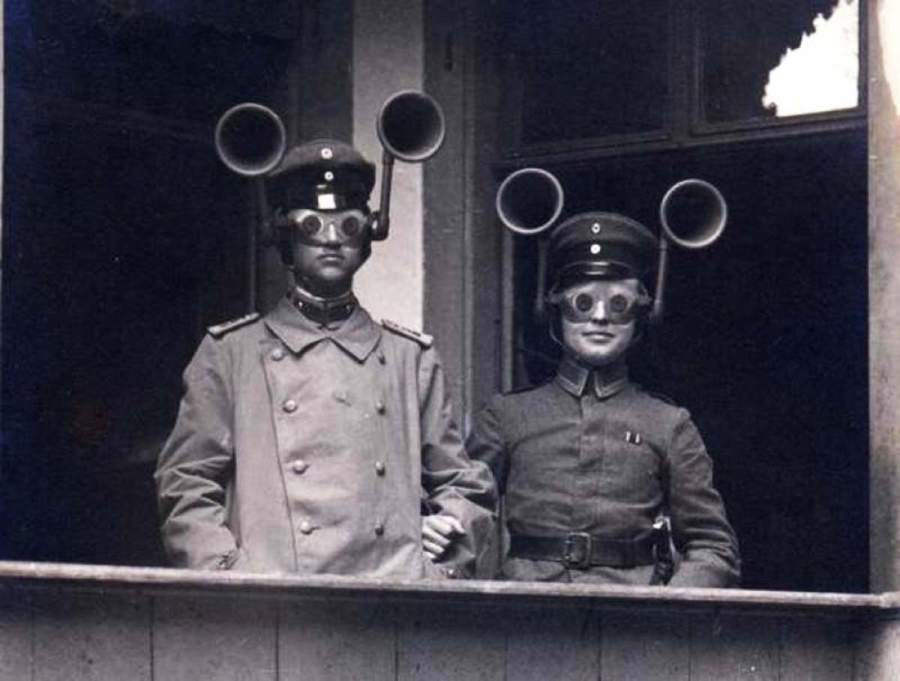 I wonder about the eye-cups? Was the idea that if the sensor-truppen were blindfolded that they would pay better attention?

It seems silly now but it was serious business, then. Aircraft were the eyes of the military, and compared to today’s military jets, they were fairly stealthy in terms of sound. 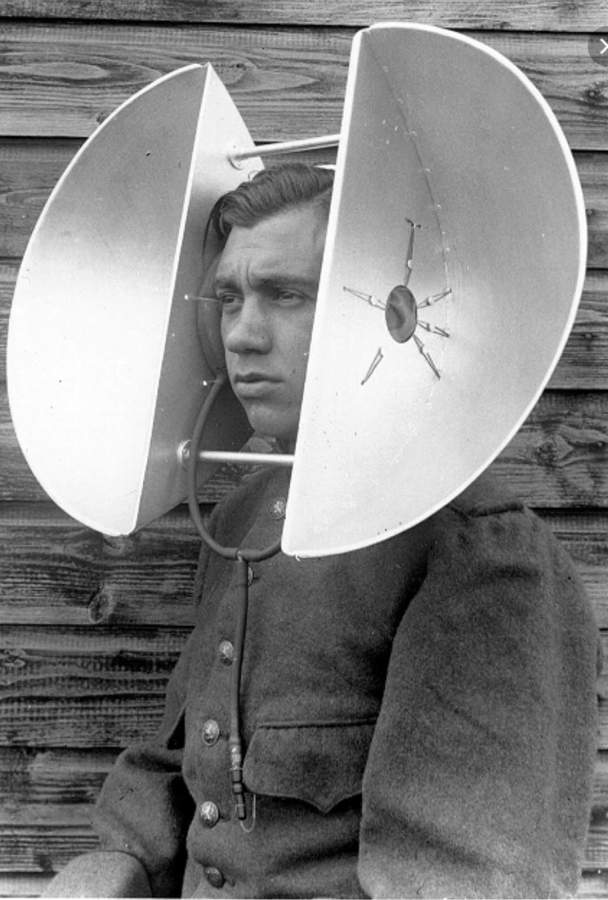 I wonder how they protected the soldiers’ hearing if there was artillery? Wait; this was World War I – they probably just told the soldier it was orders. 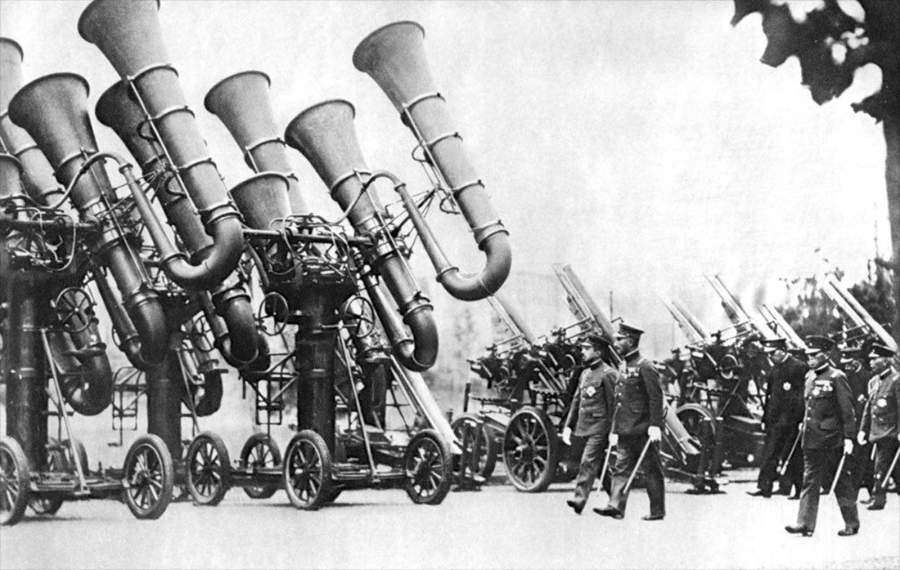 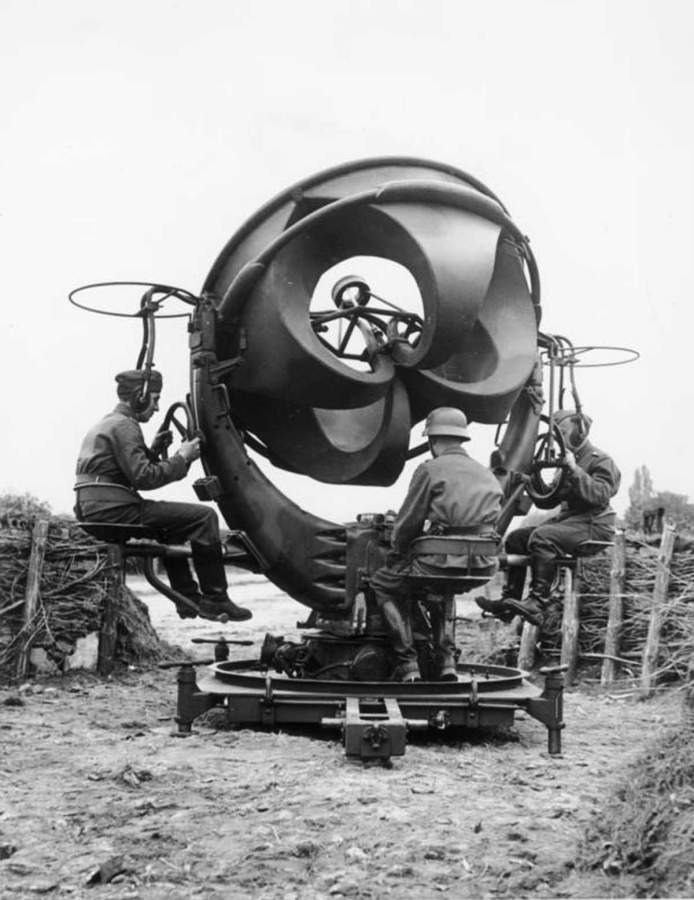 Armored vehicles on the move are quite loud. The unit above, pictured in 1939, may have been listening for French tanks. Or perhaps a soldier muttering “Merde, alors!” The German unit above appears to be set so the ‘sensor units’ can tell the operator (in the center) what they are hearing, and the operator can triangulate on a map in the center.

A funny thought occurs to me: since F-35s are stealthy, but usually fly below the speed of sound (supersonic/supercruise gobbles fuel), these old machines would possibly be useful to detect an incoming stealth F-35 strike. If any of you want to propose to manufacture these, you could probably get a billion dollars from The Pentagon to “research” it. 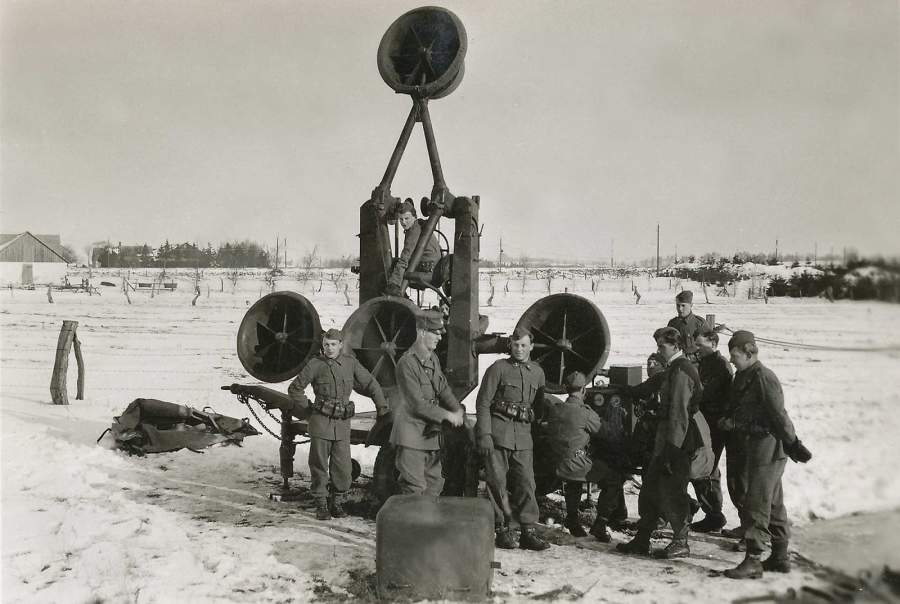 I re-watched Pentagon Wars the other night; I had forgotten how close to the bone it cut. At one point, it referred to the Sergeant York radar-controlled antiaircraft gun, and how it failed testing – “it opened fire on a bathroom fan and successfully destroyed it.” That was actually an incident that actually occurred! The Sergeant York was crap and everyone knew it but there were too many defense dollars at stake. Of course, the Sergeant York scammers were rank amateurs compared the folks running the F-35 program.