Mokume Gane is a Japanese metallurgical technique for creating a decorative pattern-welded material from precious or semi-precious metals. I made some.

Generally, it’s made by putting copper and nickel, or gold and silver, in a press then heating the press to forging temperature. Forging temperature for copper is around 1500F, not 2300F like it is for high carbon steel. 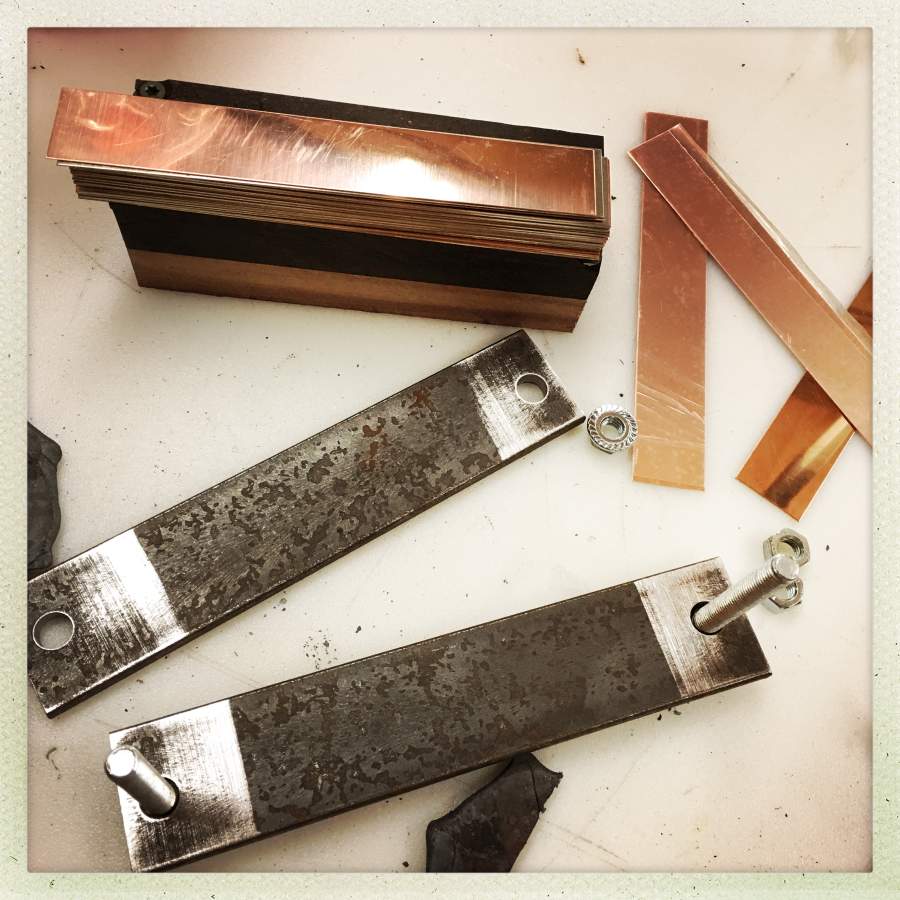 Pieces of metal, ready to stack.

I just took a piece of mild steel and chopped it and drilled it; that’s my clamp. 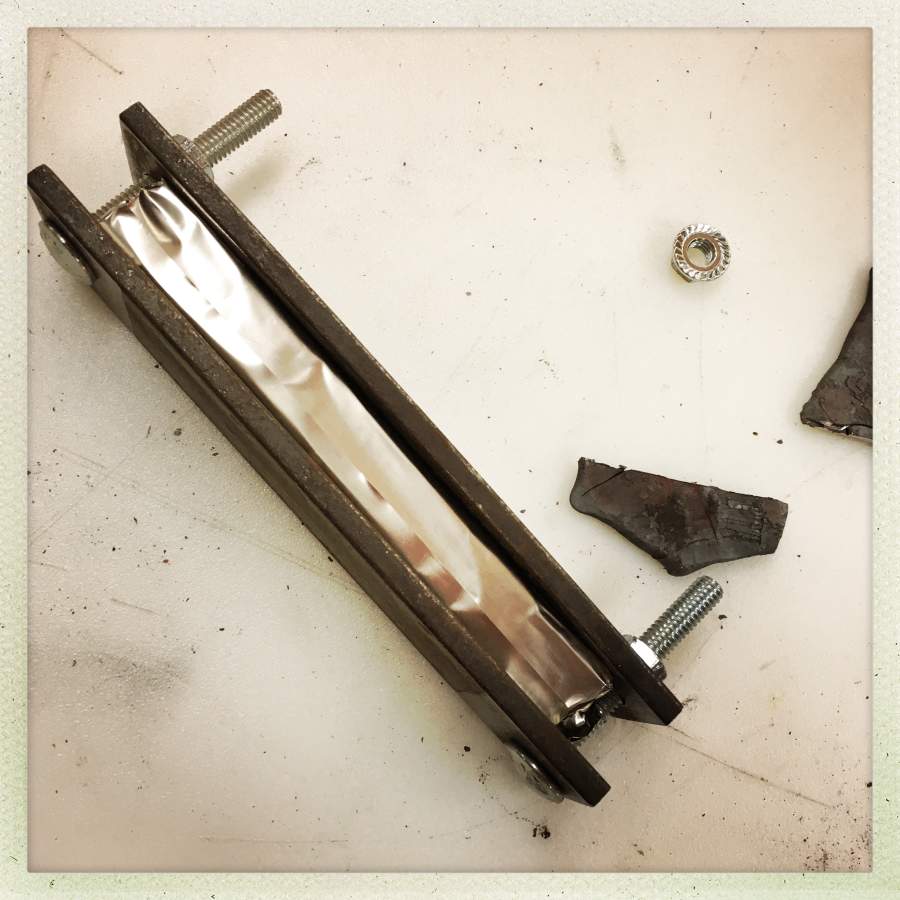 I packaged the metal in stainless steel foil; I thought that would make it less prone to oxidize. Well, sort of. As it happened, the stainless foil resulted in a whole lot more oxidation than I expected.

My infrared thermometer is not very accurate, and usually you have to hunt around to find a reading – the inside of the forge is at a variety of temperatures. I got it too hot. The stainless steel foil resulted in a very dangerous situation that could have messed me up severely. By which I mean, “set me on fire in lots of spots.” 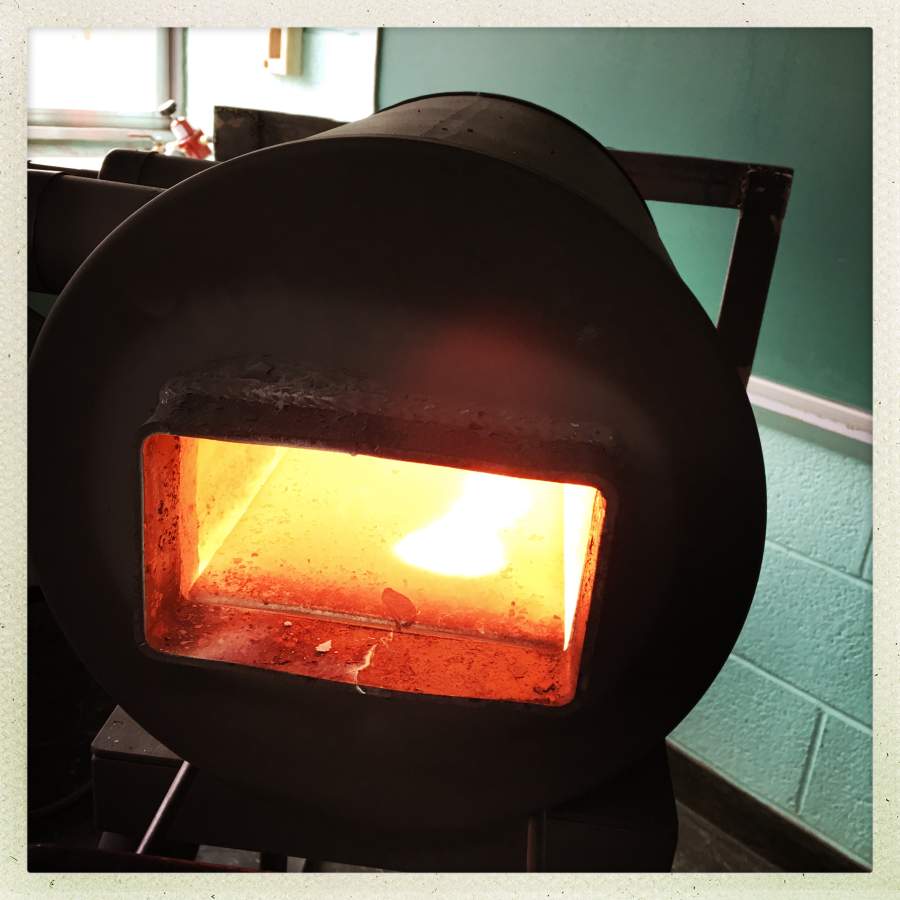 I started bringing the heat up and around when the packet of metal was reading 1500F the interior of the forge looked like it was closer to welding temperature for steel. I gingerly grabbed the packet and started to pull it back – then the stainless foil tore and a stream of molten copper/nickel blobbed into the inside of the forge.

The rest cascaded onto the floor, splashed in all directions, and instantly I had about 20 small fires.

I have gratitude for Melvin Davis, my high school and college karate sensei, who taught us that being able to move backwards fast was as important as being able to move forward fast. Before the stream of molten stuff had hit the floor I was halfway across the room going backward. I got to see all the pretty sparks and fires, though. It was interesting – the gobbets of metal made the floor burst into flame where they hit, but they spontaneously went out when the metal dropped below kindling temperature. Basically, it was as if I had poured a half a cup of molten solder on the floor. The whole game here is thermal mass, not peak temperature.

There’s a small splash-guard I built around the forge against exactly this sort of eventuality, and it worked perfectly. It’s just a 2″ high paved area of fire-bricks between the forge and the anvil. Turned out that was a really good idea. Turned out that the stainless foil was not a really good idea, because it made it impossible for me to determine the state of the metal before I tried to grab it. 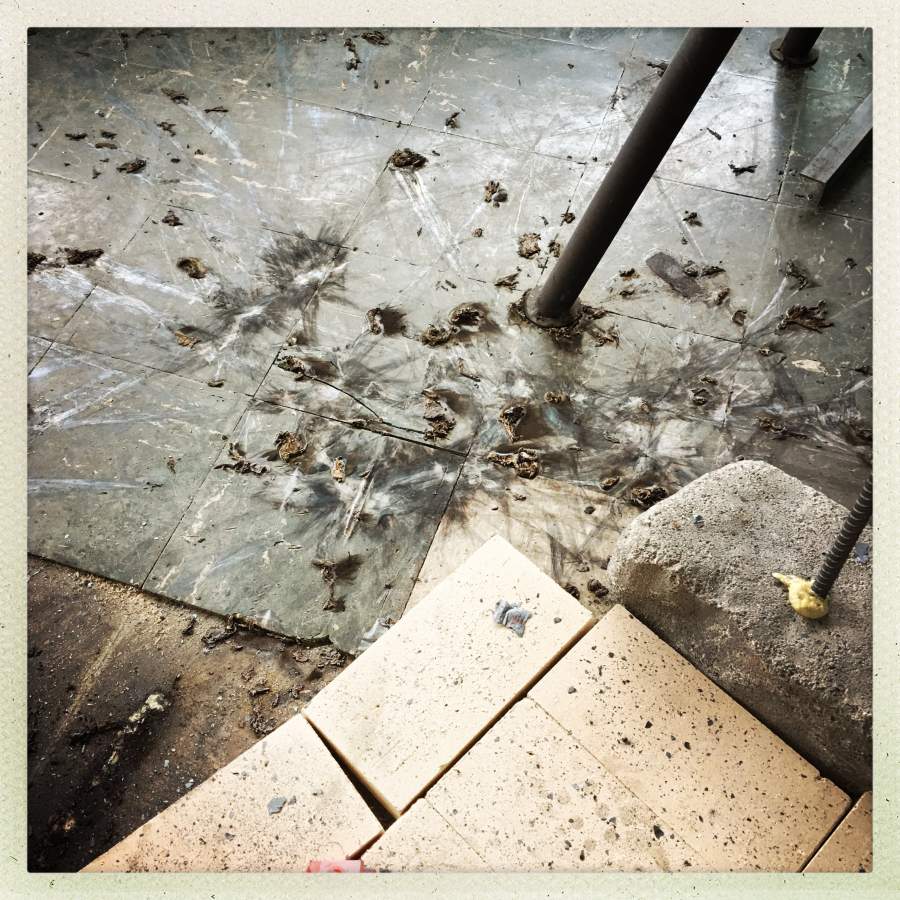 Look at the way the blobs of molten stuff cooked lines in the floor as they hit. If it had splashed on my shoes I probably would have caught fire and that would have been the end of me.

In case any of you think I am arrogant (there have been accusations, but none voiced recently) let me assure you how humble-making and thought-provoking this sort of experience can be. It’d probably make me pray with deep sincerity, too, if I thought that stuff worked in the least bit.

Actually, I have a confession to make: following cartomancer’s suggestion I have occasionally offered a libation to Agni, and Haphestus; I keep a bottle of very nice Solera in the cabinet. I sprinkle a few drops around for the gods every now and then and usually finish the thimble-sized cup off when I shut down for the day. So, perhaps Melvin Davis was (once again) my guardian angel of retrograde velocity and Agni lifted me to safety, or something – I really don’t care, as long as I didn’t get a molten copper pedicure. 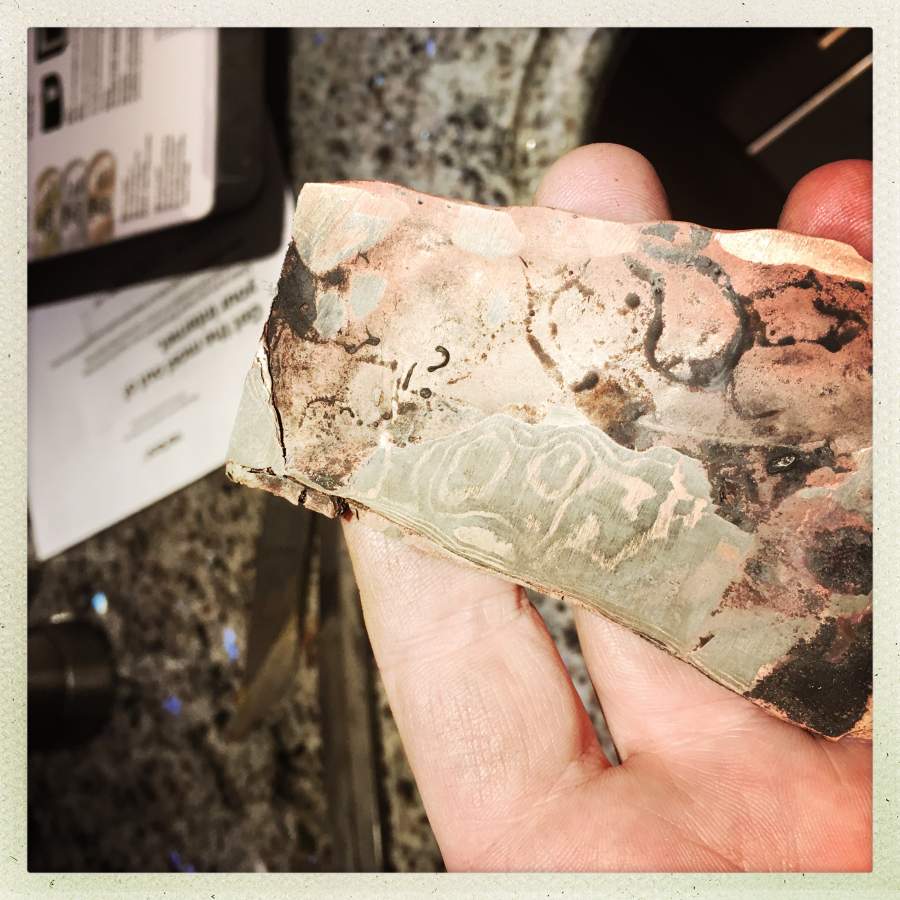 When the press cooled down, I was able to dissect the stainless foil pack and there was still about half of the ingot in there. I heated it to working temperature and beat on it a bit to get some different textures in the metal, but my heart just was not in the idea of trying to bring it to welding temperature and attempting a fold.

I don’t think I am going to do much with mokume gane in the future, and if I do, I am going to do it by making a small enclosure of fire brick, then bringing the stack up to temperature using an oxy/acetylene torch. That will give me much more positive control over the temperature and I’ll set the whole process on a steel plate on some insulating wood right on the floor so that I’m not risking anything falling any distance.

I’m going to give some thought to making a 3″ deep cat litter pit around the forge, in case anything falls I want cat litter there to smother it and reduce the chance of it bouncing. I may use welded steel for the litter-box walls, so I don’t have to worry about the alternative – wood – catching fire. This is a learning process so I expect “hiccups” – I’m just trying to make them non-lethal hiccups. My self-confidence is at a low point, I confess.

I had a nightmare a couple nights ago, in which I had a forge accident. In my dream, the forge stand’s leg melted off, and the forge fell sideways. Onto its propane feed line. The cut-off is on the other side of the forge and in my dream I had to jump over the fire-spewing hose and go for the cut-off. I woke up in a flop-sweat, freezing cold – but the freezing part was because someone had rolled away with most of the blankets. Anyway, this made me sit wide awake for about 3 hours thinking “how could I have been so stupid, not to think of that before?” and redesigning the feed system around braided stainless hoses, re-positioned ball valves, and quick disconnect connectors (which cut off gas if you pop them) Today I audited the position of everything, measured, made an inventory for the steel hoses, and it’s actually not as bad as it was in my dream, but I’m still going to re-do the whole layout; I may not run the forge until I get that sorted. If you look in over the left shoulder of the forge in the picture of the molten copper puddle, you can see the cutoff valve and the regulator. Those should be someplace easier to reach.

Want to see something really scary? Neils Provos and his forging buddy have been making crucible steel – that’s when you melt a bunch of alloys in a graphite/ceramic crucible, then lift it out with tongs. Carefully. Imagine how 50lb of liquid stainless steel splashes across a floor. No, don’t imagine it. I literally watched the rest of the video through a slit between my fingers. Oddly, the process could be done quite safely using remote controls: light the oven and run, then have a long gas-feed and turn it off and just stay the hell away from it and let it cool overnight. That way there’d be no need to lift anything and if the oven turned to slag you could just laugh and turn off the gas and run backwards real fast. I’m already good at that. Think how much thermal mass you’re hauling around when you’re moving 50lb of steel at 2900F. [youtube]

By the way, there’s a really clever trick that Neils came up with (lifted from the vikings?) of putting glass in the crucible along with the steel. When the steel reaches melting temperature the glass is already liquid and floats to the top quickly, acting as a barrier to prevent the steel from oxidizing. It’s also pretty cool that the steel’s shrinking as it cools pulls it away from the crucible; it just pops right out, thump, on the floor.