Elk drop their antlers in the spring, and grow new ones. I confess, I did not know this. Another thing I did not know is that, apparently, they grow back quite quickly in time for spring – about 1″ per day. That seems to be a ridiculous way of doing things, but I suppose evolutionary psychologists can explain why elk choose to do things that way.

Thursday morning, the elk was down to one antler. I am ignorant of elk, so I called my neighbor Bob, who is an old woodsman who spends a lot of time on my property watching the bobcats, deer, and whatnot.

One of the other things I love about Bob is that he’s not big on florid, unnecessarily verbose explanations, though he always thoughtfully and precisely answers questions.

Bob asked if I minded if he’d search for it and naturally I said to be my guest. I have a policy, which is generally if someone actually asks me permission to do something on my property, I say yes. Bob is, basically, the only person who has figured that out in 15 years. The next morning I pointed out where the elk had been hanging out, and Bob and his wife, Sharon, and their dog, began exploring about.

I could tell he was getting frustrated when I called him this morning to tell him the elk had dropped its other antler. Then I headed over to the shop for a few hours and, when I got back, I had a message on my phone: he’d found both of the antlers; would I like to see them?

It turned out that Sharon had suggested he take the dog, and he came up through the property using one of the side roads (it’s not really a road, it’s more of a directional mud-puddle) through the mine tailings, and one of the antlers was sitting right in the path. He got out and the dog pointed out the other one right away. Bob’s a gracious fellow and credited the dog with finding the antlers; see why I like Bob? Anyone who treats their dog with respect immediately earns some credit with me. 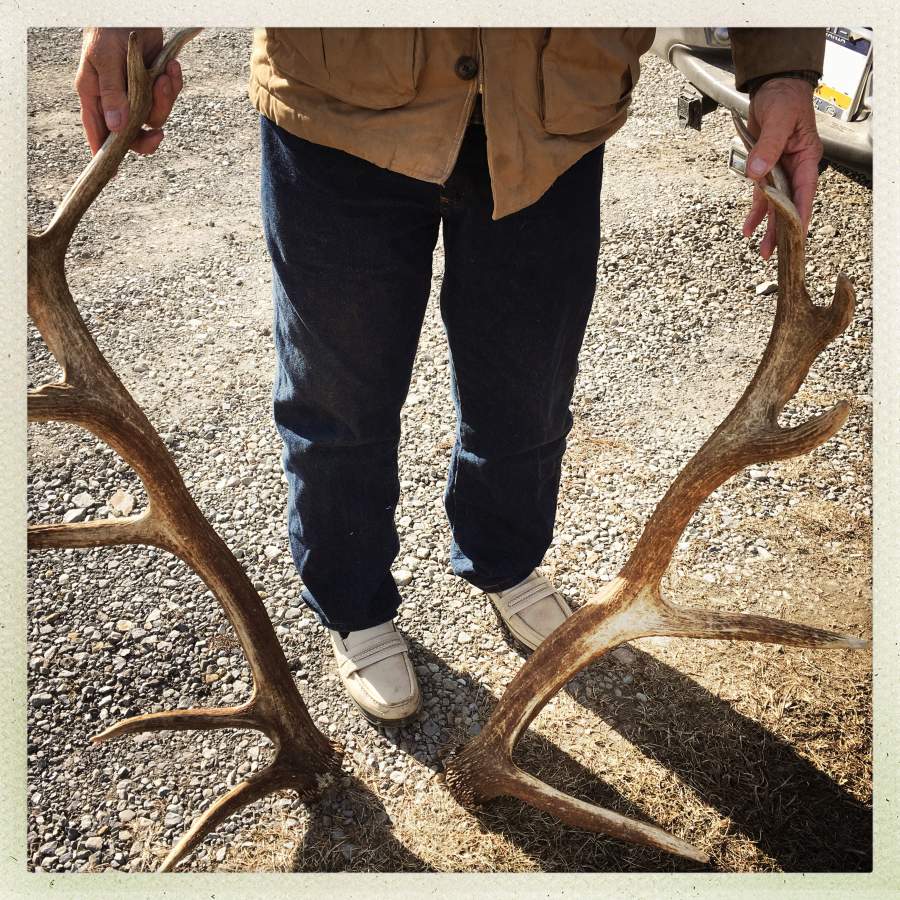 I kind of feel like evolution played a joke on the elk. Those great big things are just for whacking into other elk so they can establish a proper hierarchy of elkness. What does this do to the psychology of elks? Are the elk on the bottom of the antler racket resigned to their fate, or are they entitled and bitter?

Apparently you can get polyurethane fake skull things that you can drill and screw the antlers through from behind, then mount them on your wall in your man-cave. To me, it looks like they might cause the wall to fall in.

The material they’re made of is surprisingly dense and (given that they’re weapons) quite strong and heavy. The growth plates where they attach to/grow from the skull are pretty nifty looking.

Then, Bob said, “they’re in great condition. They’re nice even though they’re small.”