Sometimes I get addicted to weird cheap crap, like hydrophilic beads, odd LED lightbulbs, or purple lasers. And, often, right after I click “BUY” I think, “whoever makes this stuff must realize what a decadent culture we are.”

They do, it turns out. But, it’s a job, and – now that America has exported its domestic weird cheap crap production – some underpaid person somewhere gets to build it.

The Guardian has a piece you can share with anyone else who hates christmas. It’s a bit of a glimpse into the people who make crappy christmas ornaments that will appear everywhere, briefly, before winding up in dumpsters and landfills. [guardian]

Packaged up in plastic bags, their gleaming red snowflakes hang alongside a wealth of other festive paraphernalia across town in the Yiwu International Trade Market, aka China Commodity City, a 4m sq m wonder-world of plastic tat. It is a pound shop paradise, a sprawling trade show of everything in the world that you don’t need and yet may, at some irrational moment, feel compelled to buy. There are whole streets in the labyrinthine complex devoted to artificial flowers and inflatable toys, then come umbrellas and anoraks, plastic buckets and clocks. It is a heaving multistorey monument to global consumption, as if the contents of all the world’s landfill sites had been dug-up, re-formed and meticulously catalogued back into 62,000 booths. 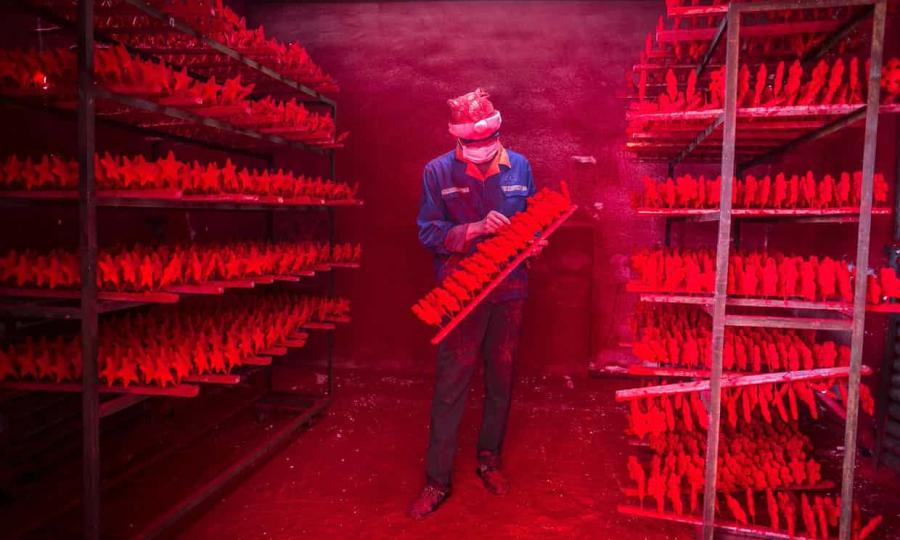 The worker goes through a dozen breath-masks a day, trying to keep the pigment dust out of his lungs. That’s just a crappy paper mask, not the kind that gives a proper air-seal. Someone is saving money at his expense. 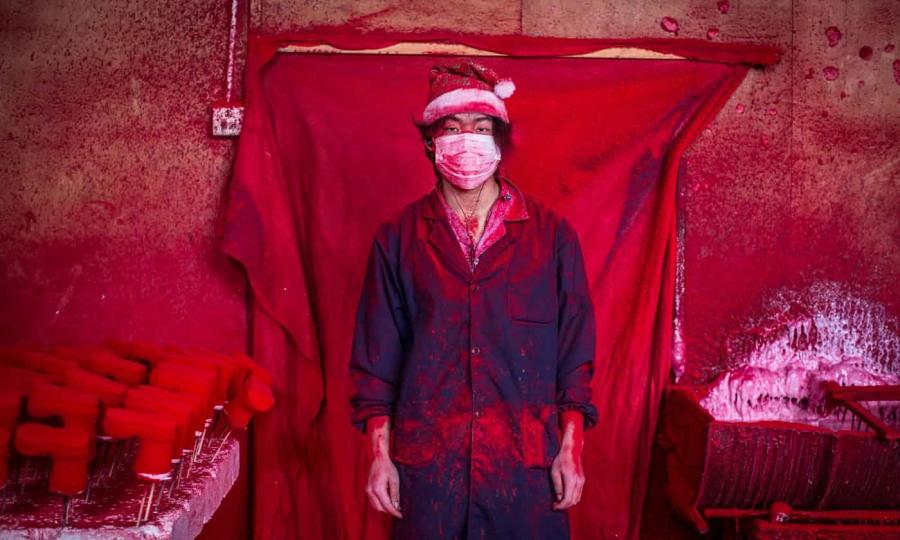 This sort of thing is repeated for every disposable bit of decadence American consumers buy.

WIRED visited a mask-making factory in China that makes latex masks, like the one I wore of Donald Trump. [stderr] Perhaps the one I wore was made and painted by these men and women. [wired] 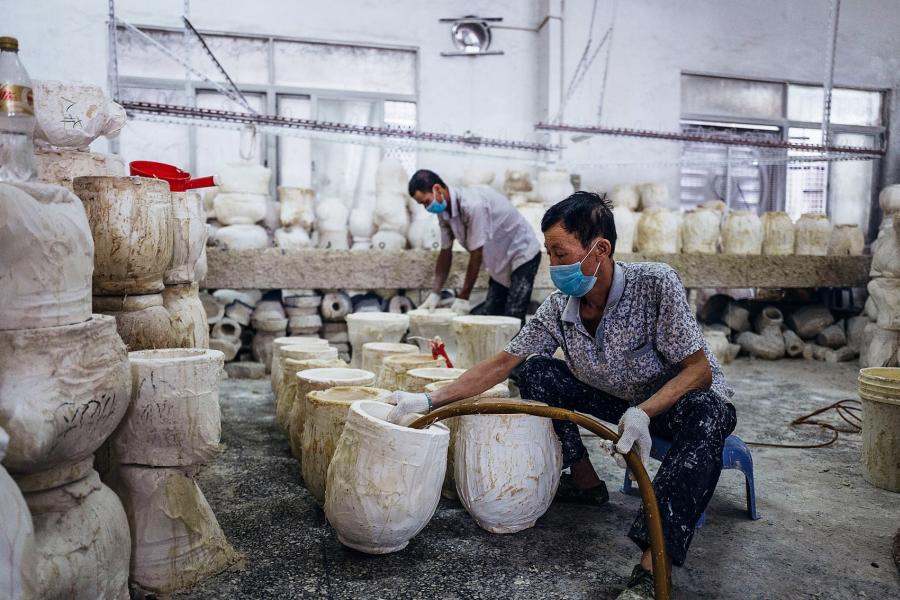 Hosing rubber into molds. Rotational casting is done by hand, not by machine. 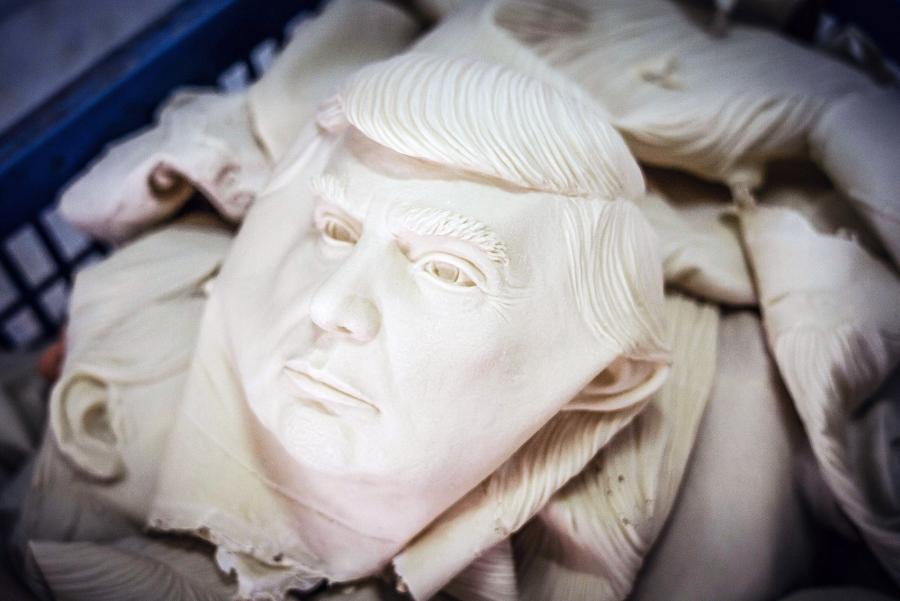 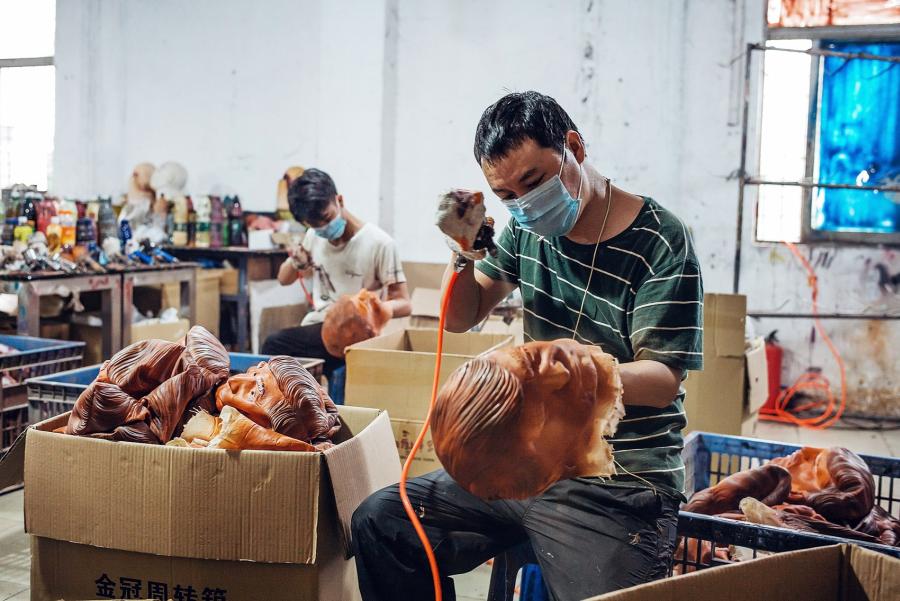 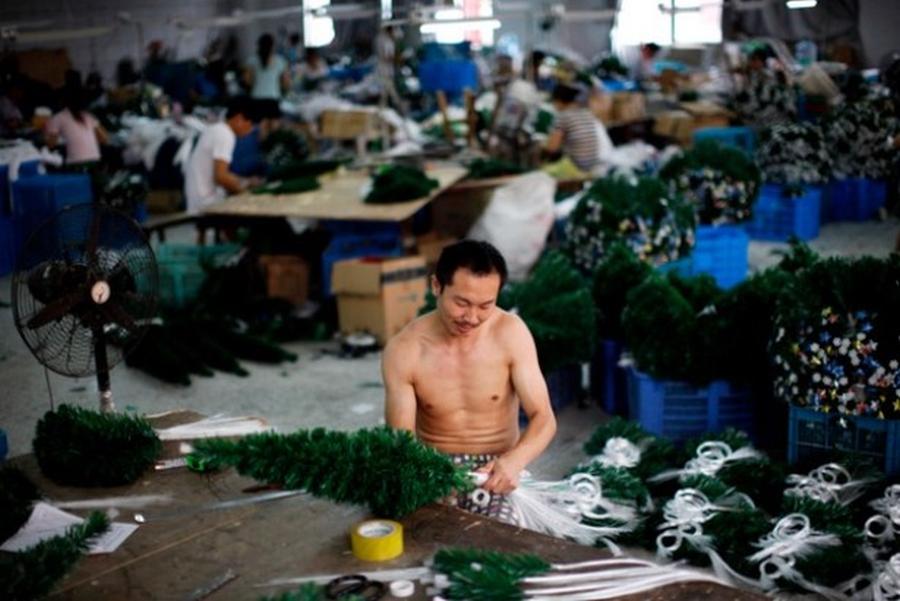 Tim Maughan, who traveled to Yiwu this summer, reported for the BBC that he was both mesmerized and appalled by what he saw there. “I watch a girl sew white fur trim on to red felt at the rate of about two hats a minute, and as she finishes each one she simply pushes them off the front of her desk where they fall, silently, onto an ever increasing pile on the floor,” he wrote. “Upstairs is the plastic molding room, mainly staffed by young men, stripped to the waist because of the heat… The men feed plastic pellets from Samsung-branded sacks into machines to be melted down, and then pressed into molds to make toy snowmen and Father Christmases.” 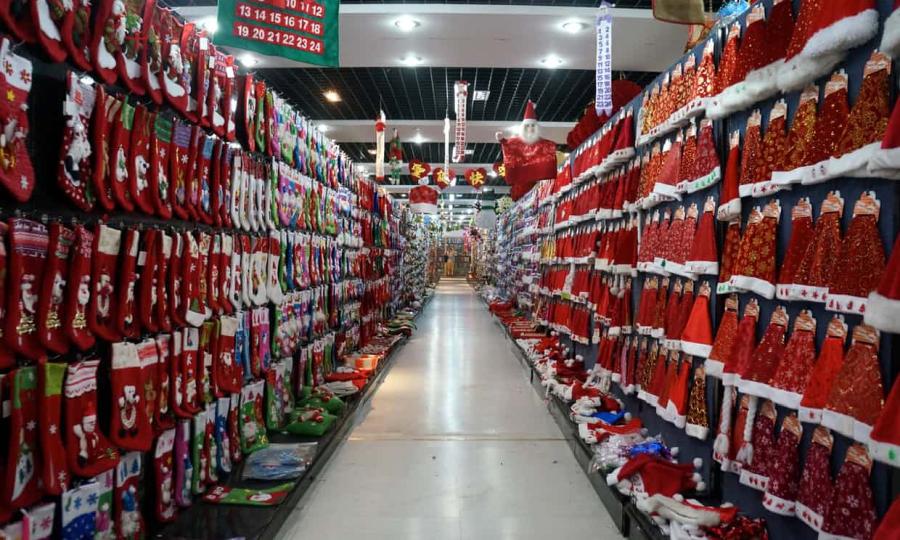 I’m torn. On one hand: people have jobs. On the other hand, they’re spending their lives making dumpster fodder, so that WAL-MART can get a slightly better price on cheap christmas crap to boost their profit margin.

For the last few years, when I want to give someone something holiday-ish, I send them soap, or caramel corn (reminds me: I need to post my recipe) or something that I’ve made. Part of that is because of the creeping fear that, if I give conventional gifts, I’m participating in the market of crap, but it’s also an awareness on my part that my time is probably the best thing I can give. It’s both worthless and valuable, but mostly it’s because there’s a limited supply.

I don’t do new years’ resolutions, but I’m going to be more careful about not buying cheap crap.

If you really want to shock yourself, watch the opening scene of Burtynski’s Manufactured Landscapes. [amzn] The movie opens with a slow pan through an electronics assembly plant in China – it could be iPhones, it could be microwave ovens, it doesn’t matter – it’s miles of benches and people assembling stuff: all on the clock, all measured and monitored, all squeezed down to the minimum salary and no benefits.

If you know any laissez-faire capitalists who believe that the free market somehow makes competition more efficient, you can remind them that that “efficiency” is almost always achieved by squeezing the workers harder and harder, by first making sure they have no alternatives, no future, no hope.

As I added the link to the DVD on amazon, I couldn’t help but think that the DVDs are probably made and packaged in a sweatshop, too, and packaged and shipped at amazon’s sweatshop shipping centers (which are pretty abusive)

Sunday Sermon: The Republic » « Old to New IV: Standing Around