PZ wonders if he’s as flawed as the people being accused. [pha] That little bit of effort is part of living an examined life.

I can confirm that there is locker room talk. My first truelove, Rachel R., once suckered me into proposing a deal in which I related guys’ locker room conversation to her, and she related girls’ locker room conversation to me. I thought that was going to be super fascinating, and so I collected a few aspirational lies that some of the guys were telling each other, and recounted them. She then told me (without naming names!) about the discussion of bra-fit problems and menstrual flows.

In 1978, Animal House came out. It had an underlying anti-authoritarian/anti-establishment message, but it also had a few “teaching moments” that any kid in high school who saw it, couldn’t miss.

It features lots of teen drinking, including a scene where Pinto (played by Tom Hulse) meets a girl at one of the frat parties and they get drunk together, and she passes out: 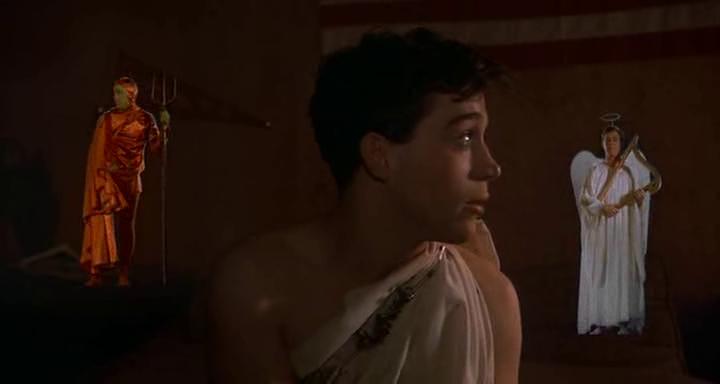 Naturally, the better angels of his nature, and his desire to lose his virginity, have a classic shoulder-battle. It ends with him doing the right thing in a sort of wrong way. He returns her to her parents’ house in a stolen shopping cart, rings the doorbell, and runs. (We later discover that she’s the mayor’s daughter.) 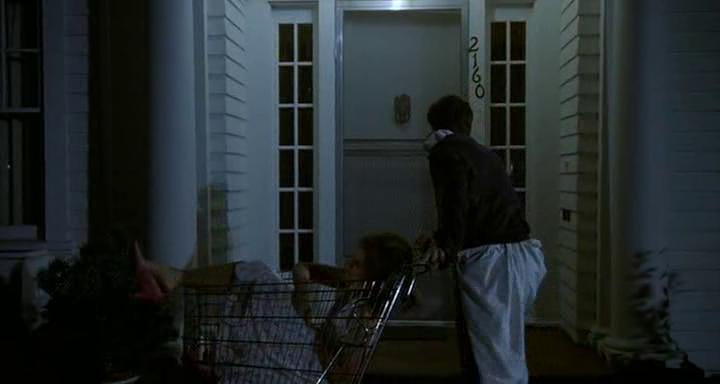 Later, Pinto invites her out and she says no alcohol is necessary, he may get lucky… But then: 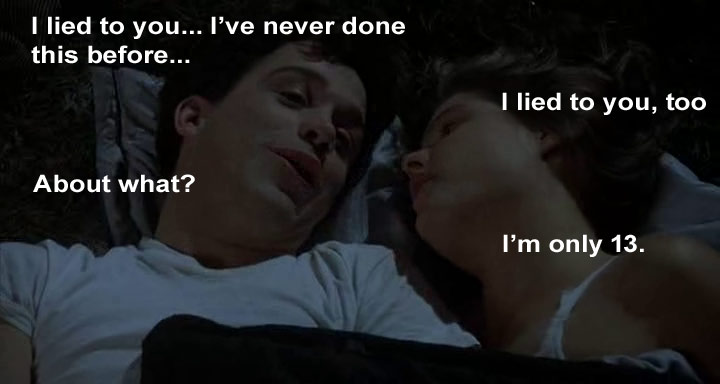 This stuff isn’t hard to figure out: I’m not holding Animal House up to be a great moral teacher, but rather we need to recognize that our culture is full of little hints about how to behave, and how not to behave. When we watch Bruce Lee’s Enter The Dragon there is a mini subplot surrounding O’Hara’s attempt to rape Lee’s sister, resulting in her honor-suicide and Lee’s demolishing O’Hara in a memorable display of focused violence and rage. Social messages about what is acceptable and what’s not are pervasive in media and popular culture. It’s not some orchestrated plot to teach people what’s right and what’s not – the social control of civilization is what popular culture is. If we have an ethical system, it’s an amalgam of the complex interaction of portrayals of characters from Oedipus and Achilles to Pinto and Bonnie and Clyde – when someone says they’re not sure, or they think that having rules written down is unnecessary, what they’re saying is that they managed to grow up in a social vacuum – or they want to pretend that they did.

I remember my sins of omission. I was in the locker room when the high school jocks were bragging about the things they did to their girlfriends and casual hookups, and I just got dressed and left as quickly as I could. But I knew the people they were talking about, and I liked them as people, and I did not defend them. So that talk flourished.

Please watch this poem by Guante. It is the antidote to “locker room talk.”

Sometimes we should beat ourselves up over things we didn’t say. Other times, I think we should acknowledge that the other person understands what they are doing, and they’re going to do to it anyway. Then we should beat them up for what they did.

Maybe the time to tell someone is when they’re in college or high school. Maybe it’s never going to work, anyway. I think Guante’s point is that it’s a good idea to think about that, more than a bit. There is a certain skeptic whose idea of seduction is to get women very very drunk and then show them his etchings: he knows what he’s doing. The conversation to have is not with him, but with everyone else; he needs a warning label, not a talking-to. He’s already had that discussion between the demon and the angel on his shoulders, and he’s decided that’s acceptable behavior; there is no further conversation that can be had with him to convince him. In Guante’s poem, the question is whether he would have spoken up soon enough, or whether his friend would have listened and learned in time.

This is why I am unimpressed with apologies like Louis C.K’s. It’s not as if he spent 20 years of his life wondering “is this a bad thing I am doing?” Of course not. Bill Cosby did not fool himself about what he was doing for decades, then suddenly have an awakening moment, “oh, oops.” When you make a mistake, you apologize right then and there and ask if you can move on, you don’t spend decades wandering around doing the same thing over and over and suddenly wondering, “am I bad, now?”

“Aspirational lies” – at the time I didn’t know whether they were lies or not. Looking back, I suspect they were lies because some of the stories were kind of unrealistic. At the time, I didn’t know: I was mostly spending my time glued to the computer, my D&D books, and Rachel R. So I had no idea how dating worked, or what went on at high school parties where there was a lot of drinking.

I actually have found myself in situations roughly similar to Pinto’s in Animal House except not in the context of making out. At one conference, Randy M. and K. S. and I closed out the bar drinking and talking about strategy and computer security and when the time came to go our separate ways, she asked if she could use my bathroom, followed me back to my room, threw up, and passed out. Since I didn’t have a shopping cart handy I picked her up off the bathroom floor and put her on the bed under a blanket, then went to sleep in the arm chair on the other side of the room. When I woke up in the morning, she had gone. We never did discuss it; we never had to discuss it. But it made me change my rules a bit: when I am at a conference I am working and I won’t have more than a glass or two of wine and I always go to my room alone. I believe the term is “not courting trouble.” Another time, in college, a friend was drinking at a wild party, felt uncomfortable with the situation, decided to leave and took a cab to my place. I was a tea-totaller in those days and I guess I was “safe” – she arrived uninvited in a semi-conscious state,* then threw up all over herself and me, and passed out. That was when I learned how un-erotic a puke-covered person is. It wasn’t ’till the next day that I realized I had probably risked her life carrying her up 2 flights of concrete stairs – which was a bigger lapse of judgement that anything else I did. If I had dropped her, I’d have really had some explaining to do. I still get cold chills thinking about that failure scenario. I remain flattered that she thought I was a safe person to come to.

I don’t ever expect either of those incidents to come back to haunt me, but I suppose they could. We find ourselves in situations and we deal with them – if someone brings forward an accusation, then you have to explain the whole situation and see what everybody thinks. That’s another reason I don’t buy Louis C.K.’s apology or Bill Cosby’s kinda-sorta-“they didn’t complain at the time” defense, or Roy Moore’s “I had their mom’s permission” – if you find yourself in that sort of situation over and over again it’s because you’re putting yourself in that situation and you almost certainly understand what you’re doing. I emphasized “whole” above, because one of my warning signals is when someone is responding to a situation, and begins carefully focusing on part of what happened. Consider the first situation I described: if all I said was “hey, she was a mature adult!” I’d be raising warning flags all over the place, wouldn’t I? Here’s another point: when you explain the whole situation it makes it easier for either party to get caught out if they’re lying. Put that another way: if someone explains the whole situation, they are more likely to be telling the truth. You’ll notice, for example, that Bill Cosby wants to focus on one of his accusers taking sleepy-drugs willingly – because a discussion about the whole situation would require him arguing that all of them had willingly taken sleepy-drugs and had somehow consented to sex while unconscious.

(* this was before cell phones, remember? So you couldn’t just drunktxt someone and say “I was thinking about you… how about I come over?”)

My two incidents: If I could have a re-do on them, I’d do the same thing, except I’d check back with them a week later and ask if I had handled it OK and whether they had any questions.