For the last year or so, I have been telling my friend Anna about the greatness that is the crab cakes at the Prime Rib restaurant in Baltimore. So, finally, we planned a weekend involving some touristing, museuming, crabcake eating, and hanging out with mom and dad. The crabcakes were (as usual) all they were cracked up to be.

I don’t want to just carpet-bomb with pictures of cool stuff from museums, because my experience is usually that the museums have better photographs of the displays than I could manage, anyway. When I post something from a museum I am usually trying to capture my perception of the thing in the museum, rather than a straightforward view of what the thing looks like. Part of the beauty of museums, to me, is when they are well-curated and someone has put thought into “when they come around that corner, they’ll have a long view down the hallway, so we should have something striking at the end that will also illustrate what kind of collection is down here.” Museums full of art are an art-form themselves.

On that note, if you have never watched Louvre City you must. It’s incredible.

It’s one of the most gentle, loving, awesome documentaries I’ve ever seen. And, as a kid whose hobby was mapping the secret access paths into the Louvre behind the Louvre, it’s especially cool. If you’ve ever looked at one of those massive paintings and wondered, “how do you move those?” this is the movie for you.

The Baltimore Museum of Art is located on the south end of Johns Hopkins University and is free admission. When I was an undergrad, and I was trying to write a paper or study for something, I’d wander around in there and let the art keep my mind free and inspired while I thought about the drudgy stuff. It still feels weird to be parking a car, there, instead of chaining my bicycle to the fence and bouncing in.

Across from the museum is Wyman Park Dell, where Shakespeare In The Park used to perform, and (since it’s only 3 blocks from my first house) Thenwife and I would grab a box of glasses and some bottles of wine and enjoy the show while spreading Bacchus’ recipe for good cheer. 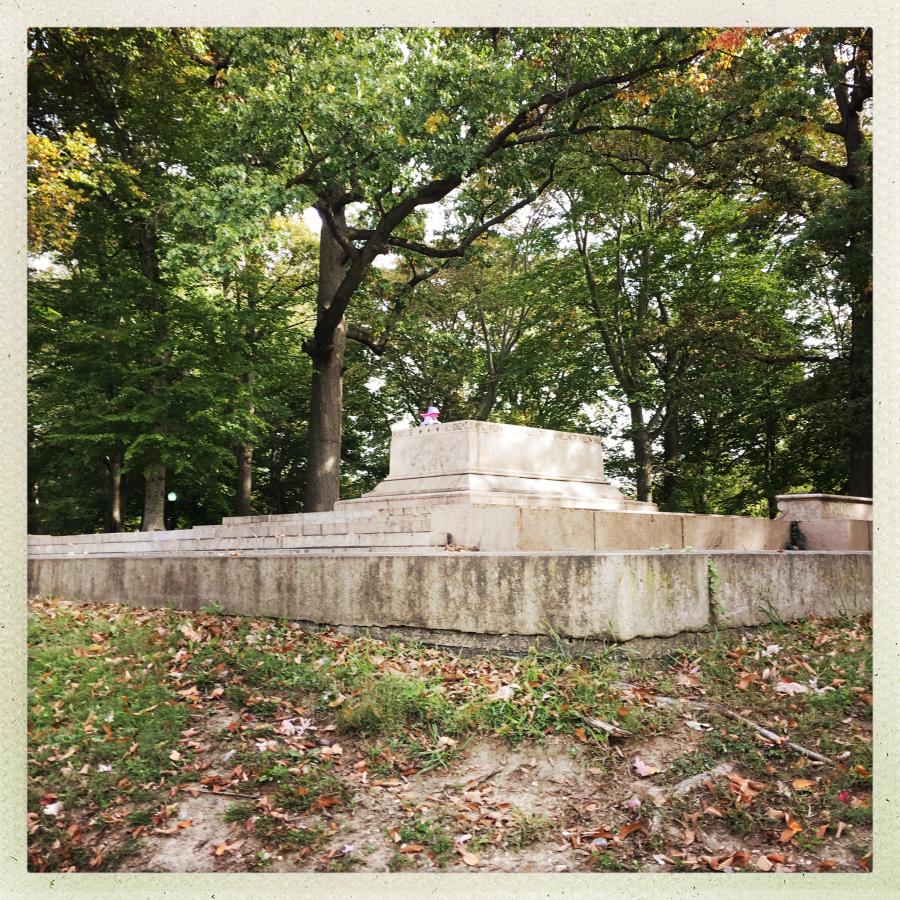 There used to be a quite beautiful statue of Robert E. Lee and Stonewall Jackson, here. The Mayor of Baltimore had it quietly removed with no warning, one night.

I don’t approve of the message of the statue, but it was a lovely place for a statue – the riders on their horses coming out of a gap in the wall of trees, dappled with light – it blended in so that I never thought twice about it. I guess that’s the point. 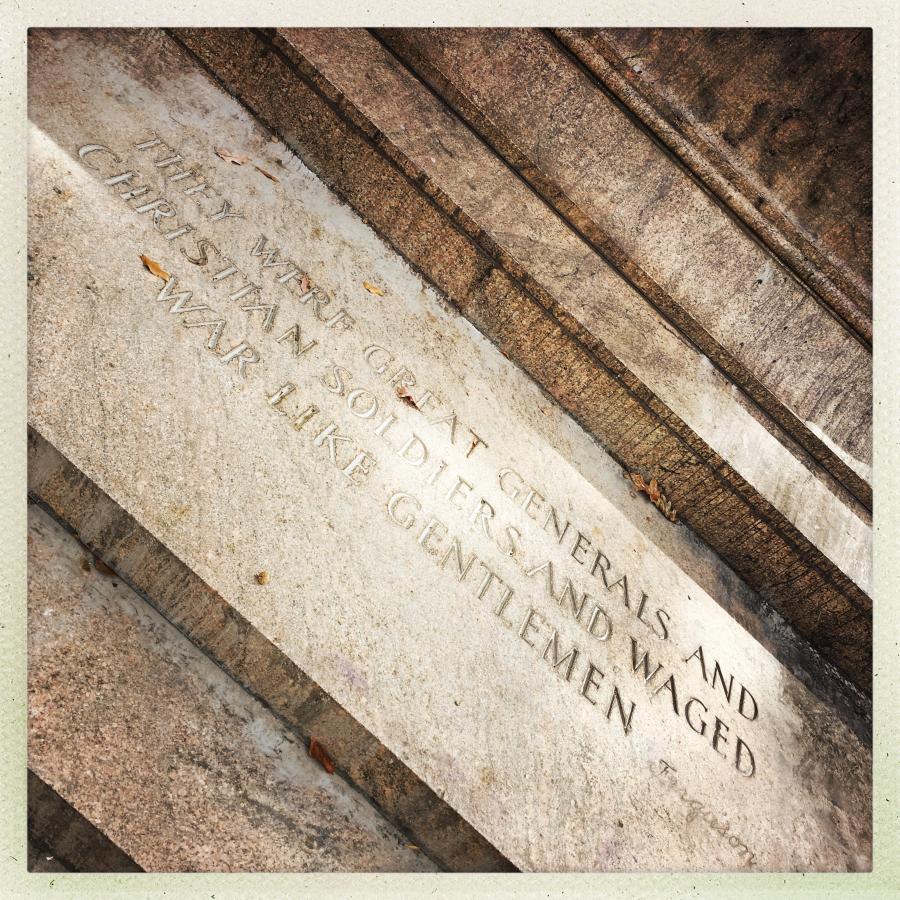 The statue was put up in 1948 – during the peak of the period when the civil war was being whitewashed into a noble cause of noble warriors fighting nobly for (mumble mumble) “… and state’s rights.” Also, early cold war: we have to get in the part that they were christian soldiers. Presumably that addition was not intended to enhance the irony that it was good christians shooting eachother to pieces over their right to oppress people. Good christians have always been doing that.

It was hardly a gentlemanly war, either. Gentlemen would have patched things up diplomatically, or perhaps had a duel or two. Instead, the young republic founded on liberty fought to the death over slavery. There’s not much glory in that.

I think a statue of Donald Hollowell would look good, there. [stderr] Or perhaps Henrietta Lacks, who lives on in test tubes over at Johns Hopkins Hospital – Baltimore’s greatest remaining institution – where her eternal life began. 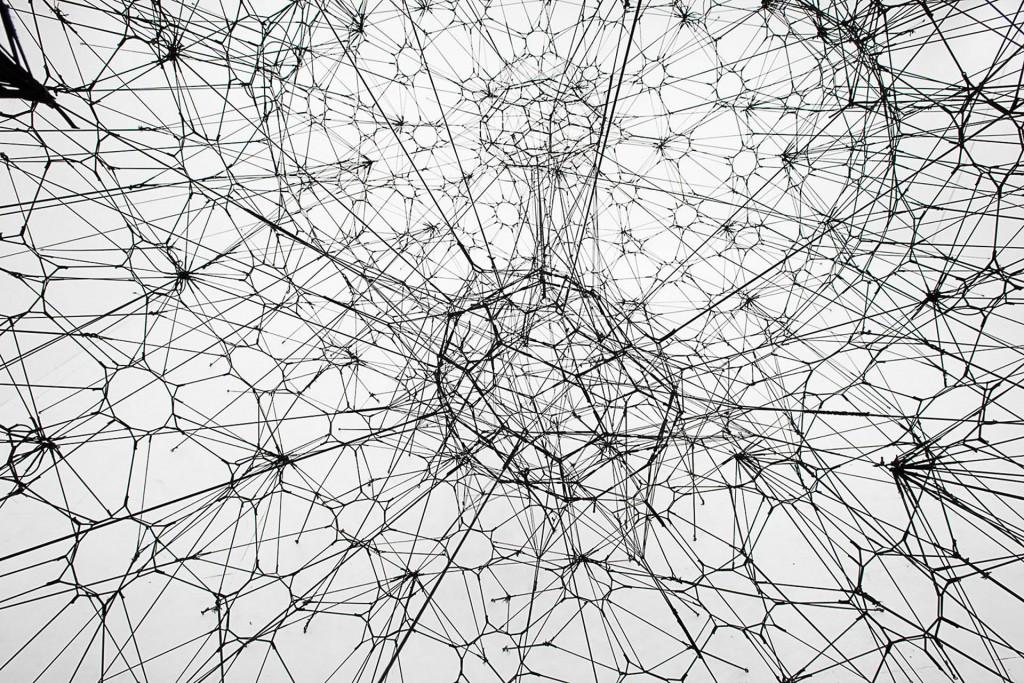 The main exhibit at the BMA right now is works by Tomas Saraceno; they are mind-hurtingly interesting. [Photos are from Saraceno’s website] 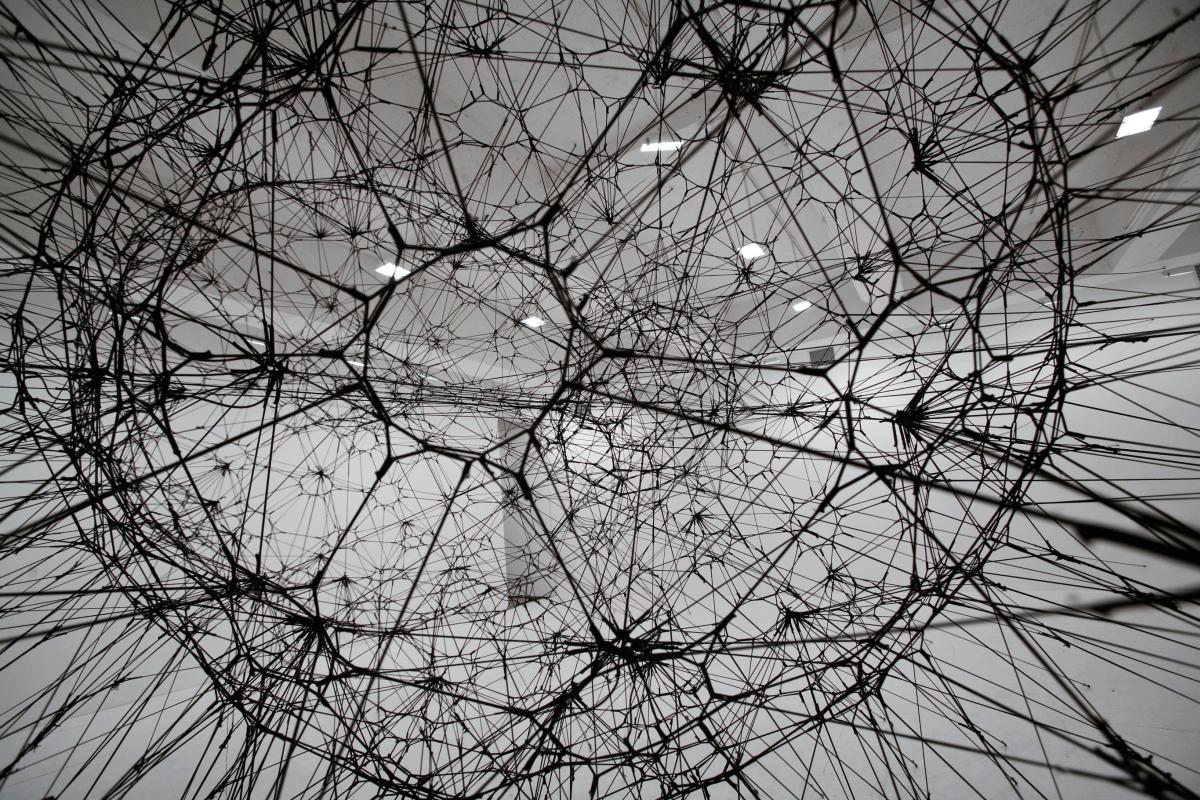 These sculptures are installed under tension; that’s all that holds them together. When I first saw them, I thought the larger “spines” were something like carbon fiber rods with string run through them, but then I noticed they were paracord. The structure is different thicknesses of rope but it appears to me that if you unhooked all the ropes holding the thing to the wall, you’d wind up with a puddle of rope on the floor.

That hurts my mind. 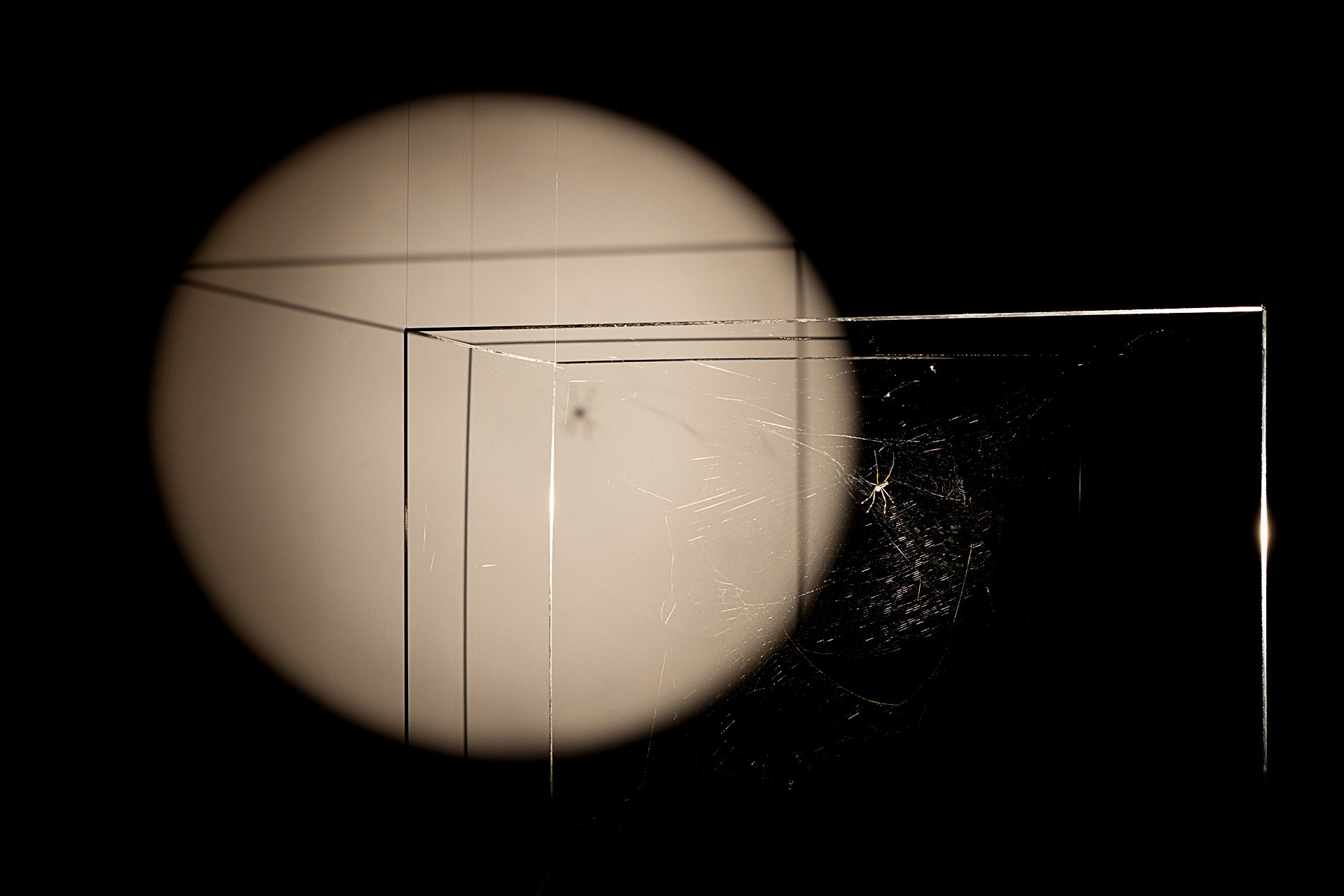 Saraceno’s inspiration, to a degree, appears to be spider webs. One of the exhibits was this (minus spider) – a lucite box full of spider-webs, perfectly lit so you could see all the strands.

If you get a chance to see one of his installations, take it! I wonder how it’s moved and set up – presumably he comes with a team of people and they somehow unfold and erect this thing by tensioning strings through eyebolts set in strategic locations around the room. 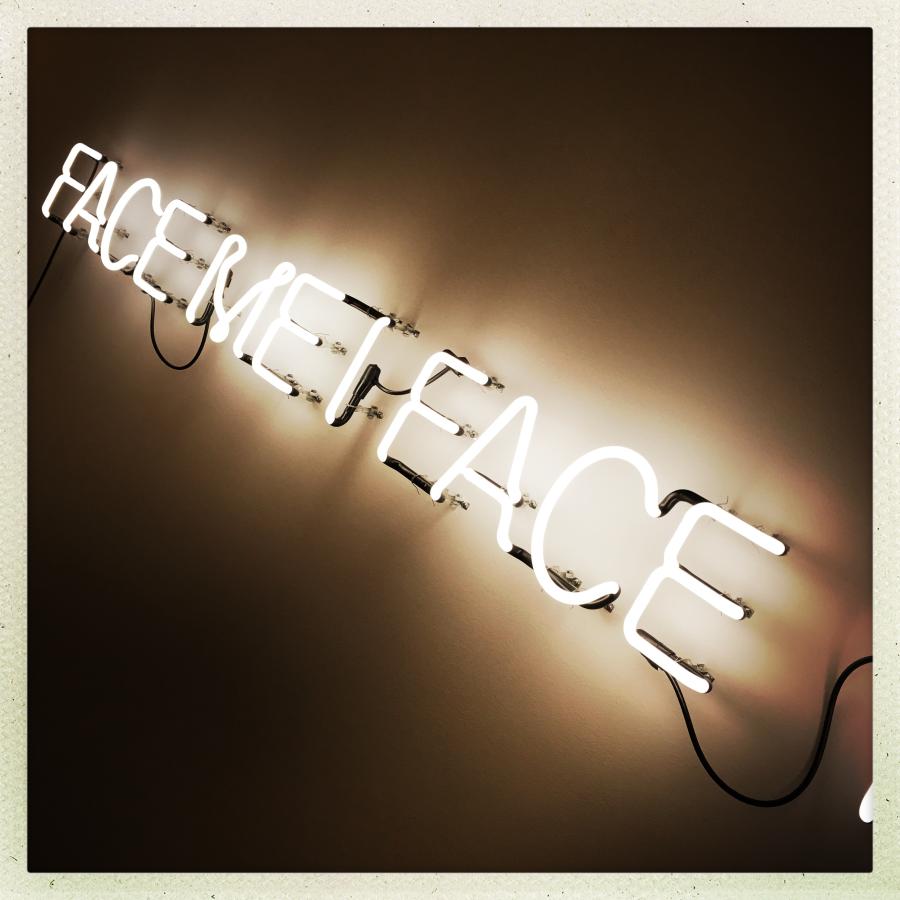 I love neon art. It’s becoming obsolete, now, since neon is moving into a “thing of the past” – this artist, I believe, also is responsible for the art-work that was along the side of the BMA in the 90s: it read “VIOLINS”, “VIOLENCE”, “SILENCE” with the letters changing every so often. There’s something unique about the way neon tubes shed light, which looks amazing. 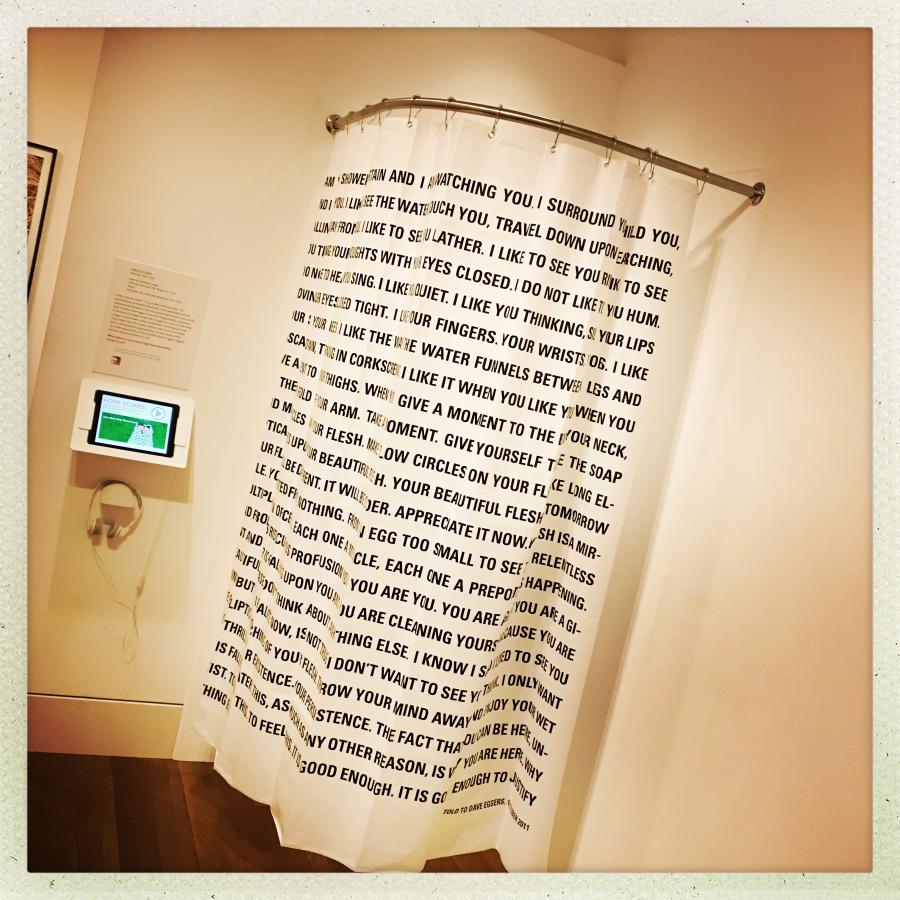 After that, we drove out through the old commuting route I used to take to Glenwood, MD, when I worked at TIS. That goes through Druid Hill Park and past Mondawmin mall – where the police rioted against trapped pedestrians following the murder of Freddie Gray. The area looks about the same as it did in the early 90s except there’s an elementary school, and a community college, too: more crowds. When the Baltimore police decided to have a riot, they ordered the city buses – the main way people who go to school or shop in that area have of getting back and forth – shut down with no notice. Nobody was ever censured for that; the media reported that a large mob of black people were rioting, and the police threw tear gas and flashbangs; they must have had a fun time.

In Baltimore, it’s impossible to avoid constantly bumping into these reminders of its half-on-the-fence stance during the civil war, its segregation, desegregation, and re-segregation.

The Kurds Got Screwed » « A Truly Scary AI