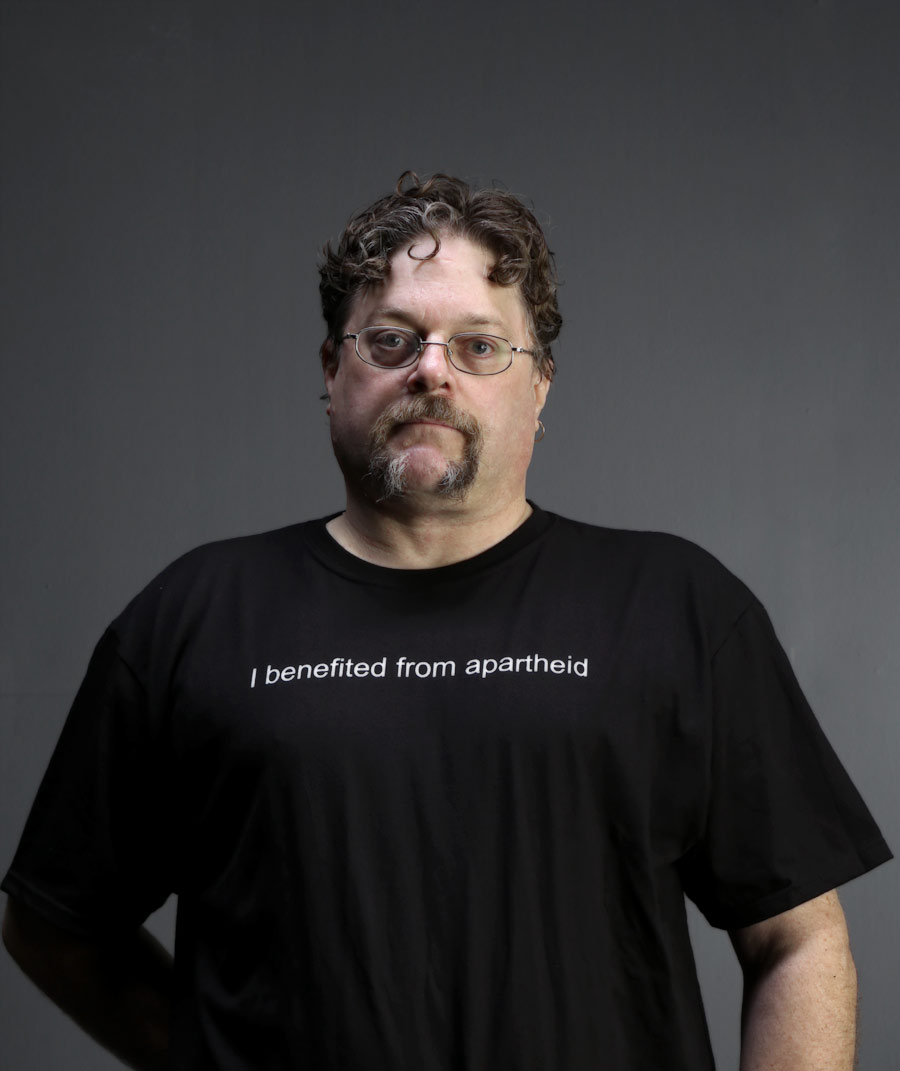 It seems pretty obvious – even though my ancestors came to the US after slavery and the civil war, they occupied land that had been cleared of its Lakota residents, and was given to them “for free.” I also benefited from a school system that was better, in the late 60’s/early 70’s than those that black kids had. And my parents had educational opportunities that those black kids’ parents generally never had, and better job opportunities, and thus they could save more money, buy a house, and use the equity in the house to finance their kids’ education and opportunity. Those are all simple facts; one might be able to point to a few exceptions but they’re exceptions; generally, being a white boy in the 70s in the US meant the world was your oyster.

Some of the comments on the original Tshirt inspired me to make my own, which I’ll wear in various places.

“I tell you who benefited from apartheid, it was blacks,” wrote Facebook user Margarita Barnard. “I wish blacks would give whites apartheid. And I will tell you why I say this. Whites came to a country where there was nothing, just some black tribes living in mud huts killing each other. No roads no infrastructure no South Africa even. Blacks were always dying from famines when there were droughts, from tsetse fly [sleeping sickness], from yellow fever, malaria, name it they died in droves.”

Rather obviously, not all white people took full advantage of the better educational opportunities that were available to them.

She probably doesn’t realize that one of the reasons why blacks were enslaved was because they were more resistant to malaria than were the white slavers and colonists – who were always dying from famines and dying in droves from malaria. When the colonists discovered that black slaves could work outside (in horrible conditions) and survive, that was what really kicked chattel slavery into overdrive in North America.

Monty Python lampooned her view in Life of Brian – basically, it’s the “what have to Romans done for us?” sketch, backwards.

Another objector, Francois DeWet, posted: “Get me a dictionary or something that shows me how black Africans could be taught in their own languages subjects like maths, science and biology. Simple, you cannot teach in a language that does not have the terminology to do so. We didn’t place restrictions on the development of their languages and simply had to find another way to give them a start in live. So, alternative mediums were introduced to accommodate the lack of terminology, and they went apeshit!!”

You can’t buy irony that concentrated in stores, anymore. I believe it’s used to synthesize methamphetamine, or something. The fellow is complaining about black Africans’ language skills? As an amateur writer, I’d offer anyone this advice: if you’re complaining about someone’s writing – don’t do it in writing; you are almost certain to summon a divine hubris-slap.

Alan Marsden wrote: “Is there a punchline to this joke? The fact that like all colonial powers we found a race entrenched in the iron age and lifted them out of it with technology, medicine and education does not count? … No, I don’t feel guilty. In fact I am well annoyed that what we built has gone to wrack and ruin in incapable hands (allegedly the fault of apartheid, even though most of Africa STILL live in the iron age, and apparently like it).”

You know what would really have made Alan Marsden complain? If, as soon as the colonial powers took their foot off of the African’s necks, they had suddenly turned around and triumphantly broken out technologically and surpassed Europe economically – like the Chinese are doing. That would really set him off, I bet. But, like the earlier commenter, he didn’t understand the long-term effects of colonialism: divide and conquer resulting in genocidal tribal wars, economic collapse when the powers pull out to fight their silly wars in Europe, leaving behind corrupt dictatorships. He probably doesn’t realize that a tremendous amount of the famine in Africa is a result of political instability knocking-on from the colonial system.

There were voices of sense:

“The comments have said the time for white guilt is over. I don’t think guilt is helpful but it’s really not what this is about. For me it’s an economic issue.”

Perhaps the way to ease white guilt would be for us to take our feet off the black people’s necks, stop allowing cops to shoot them, dismantle the corrupt and racist war on drugs, re-de-segregate schools, and re-establish the social safety nets that the current generation of white nationalists are so desperately trying to destroy.

This is what “I benefited from apartheid” means: 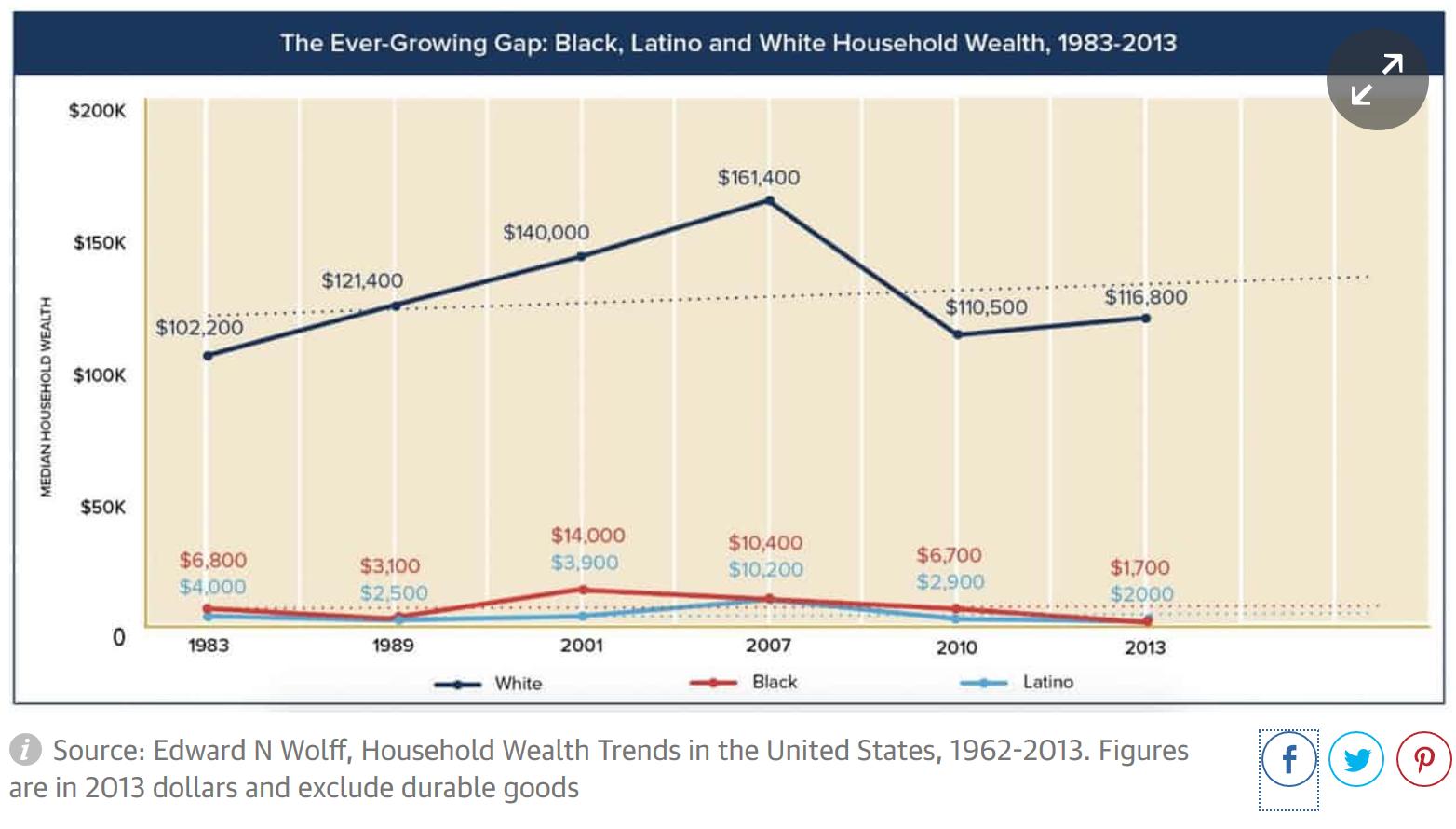