[A] pepper-spray wielding Trump supporter was smacked to the ground with homemade shields.

perhaps they should have used harsh language? Or hegelian dialectic?

Another was attacked by five black-clad antifas, each windmilling kicks and punches into a man desperately trying to protect himself.

I’m sad to see Noam Chomsky quoted all over as “Antifa is a gift to the right” – sorry, Noam, game theory says that an unpredictable unlimited downside works better than a predictable reward in a long-term strategy. “Tit for tat” game theory scenarios are predicated on the house making the rules, and they don’t take into account catastrophically disproportionate outcomes. Oddly, catastrophically disproportionate outcomes have been the table stakes for a long time; the house has set up ‘tales I win, heads you lose’. When white supremacists learn they can pepper spray people and cops will stand watching, they’ll do it again and again. If they learn they can drive cars into people, they’ll do it again and again. They need to learn that “sometimes, that really really blows up in your face in the most horrible possible way.”

“At least 5 individuals” – were the ‘individuals’ in a group? If they were in a group, they’re not ‘individuals’ they’re members of a group. You know: “at an incident at Cannae (216BC), about 60,000 individuals were killed during the course of a day marked by unusually severe accidents.” 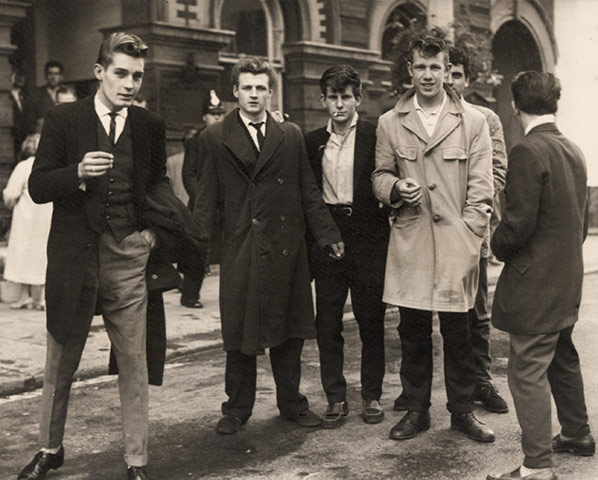 Why is the fact that the antifa were “black-clad” relevant? Were the fascisti dressed like Teddy Boys? [wikipedia] During the course of the Notting Hill race riots, snappily-dressed Teddy Boys attacked their fellow citizens who happened to be brown. Does the clothing matter? Would it have mattered if they were wearing Hugo Boss-designed Gestapo uniforms?

It sounds to me like whoever wrote that piece just barely snatched their fingers off their keyboard before they wrote “hoodie-wearing black-clad anarchist thugs.”

I am not saying the media should show no bias. Anyone who is alive today ought to know that the media is biased, and factor that in whenever they read an account of an event. What bothers me is that the media’s writing pretends to be objective, which means it’s passive and it cowers behind its typewriter. Right or wrong, people are out there making a stand, and giving and taking lumps. This isn’t bad weather that just sort of happened.

“We’re just puzzled as to why people consider violence a valid tactic,”

1/3 of the country wants to oppress another 1/3 of the country, and the remaining 1/3 of the country wants to stand around and ask “why people consider violence a valid tactic.” Because asking fascists to be nice doesn’t seem to be working and their end-goal is some muddy combination of increasing oppression against black and hispanic people, LGBT, immigrants, and jews – or maybe killing them or deporting them. The neo-fascists’ goals, their desired end-state, is only achievable through violence. Their marching, their rallies, are shows of force; the violence is implicit.

I hate the way that some media write about stories: “individuals were attacked.” The implication is that they were passive, perhaps just minding their own business. I think I would rewrite the first sentence as: “Protesters wielding shields clashed with protesters brandishing pepper spray.” They’re reporting it so that it sounds so neutral – I don’t think that’s appropriate: both sides were spoiling for a fight and they got one. I don’t think you can say someone who showed up at a fight was “desperately trying to protect them self” – I protect myself by not going to protests wearing armor or carrying pepper spray; someone desperately trying to protect them self stays at home and posts on the internet from thousands of miles away. The same applies for the cops – they can’t say they’re there expecting peace and orderly behavior when they’re toting military weaponry and shields of their own.

Whenever I hear about shield-bearing fascist protesters, I find myself daydreaming about back in the day at Pennsic, when I saw a troop bearing red shields with gold eagles, wearing red capes, and lorica segmenta, marching in formation, and suddenly I was all choked up with the beauty of the thing. Except for that it’d make the cops start shooting people, it sure would be fun to show up at one of the protests with a wing of properly armored folks who know how to use shields. Noam Chomsky’d definitely say that was a “gift to the right.”

Speaking of Vampires » « Make a Statue to Donald L. Hollowell