If you haven’t, the story is at the Washington Post [wp].

Apparently, the cop forgot that a Taser ‘Axon’ body cam, when turned on, dumps its current video-buffer of activity. That’s right: it’s always on, it just has a switch that cops can use to hide what they’re doing – because police unions everywhere said they wouldn’t wear cameras, otherwise.

Elsewhere, I have complained about newspapers’ tendency to use minimizing language, “collateral damage”, “ethnic cleansing”, “enhanced interrogation” – when anyone with two functioning neurons knows that something much worse is going on. In the case of the “forgot my camera” video, this is not an “accident” it is “evidence.” Specifically, it is evidence of multiple police officers committing multiple federal crimes.

Not at all surprisingly, the blue goons have circled the wagons and are going to investigate, blah, blah, blah. But that’s all the preliminaries to sweeping the whole incident down the memory-hole: how much investigation and careful analysis would I expect if I were caught red-handed with a knife standing over a bloody corpse? I’d expect to be arrested and detained until I was charged, tried, and probably convicted, right? So, what we see in the video is not one cop possibly going back and “reconstructing evidence” – it’s one cop’s camera including two other cops watching them fabricate evidence. That’s one, two, three bad apples. 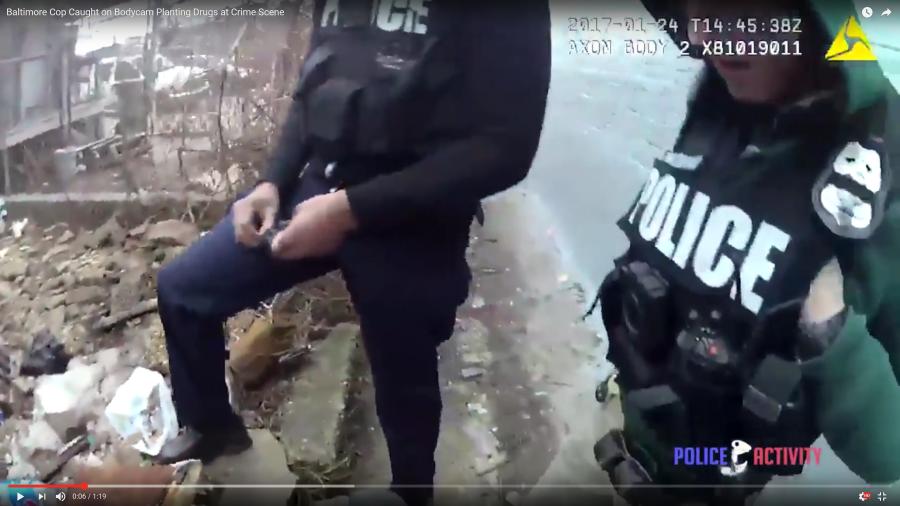 Officer Simonyan (in the green hoodie): we see your camera is on your chest. Was it conveniently off at the exact same time as the other cop’s? Why?

Officers 2 and 3: you see a fellow officer producing controlled substances from somewhere and putting them into the scene. Where did they come from? Was your partner holding a controlled substance prior to “finding” the drugs? Were you aware that your fellow officer is apparently in the habit of doing their job with a supply of drugs? Or, were they taken from someone earlier? If so, where is the video of that; that would have been evidence for their arrest. In case anyone has forgotten, carrying an illegal amount of illegal drugs is illegal – even if you’re a cop. The story the police are floating is that the drug had just been seized as part of a bust: OK, well then where’s the cop-cam video of the bust when the drugs were seized legally? If it was a solid bust, there’d be no need to fake evidence, and it’d be on camera. If it wasn’t a solid bust, then you don’t put a citizen in prison; it’s really simple.

At present, the two other officers (Simonyan and Brunson) are on administrative duty (i.e.: off the street) until the investigation is complete. Meanwhile, the person they were investigating – the person whose evidence was tampered with – was in prison since January. So the cops are getting desk duty while some citizen spent 6 months in prison because they couldn’t make bail and are awaiting trial based on manipulated evidence?

The Baltimore police have apparently begun reviewing active cases in which those officers were involved, but why not inactive ones? Are we really expected to believe that they haven’t done this sort of thing before?

Officer Pinheiro, who planted/tampered with the evidence, has been working for the Baltimore police since 2011: how many other times has he tampered with evidence? It strains my credulity if they expect me to believe that Pinheiro just happened to screw up the very first time he manipulated evidence. Are the Baltimore police going to review every conviction that Pinheiro was involved in? And, since we can tell that Simonyan and Brunson are comfortable standing around watching a federal crime being committed, why isn’t every conviction they were involved in also under review?

[Police Commissioner Kevin] Davis said his department has “not reached any conclusions, because that’s what an investigation is for.”

“To let that initial video that was released by the public defender’s office stand all by its lonesome I think doesn’t paint as clear of a picture as we would like to offer to the community right now,” he said.

Yeah, no fucking shit. Here’s the problem: when you’ve got cops being caught in the act of manufacturing/manipulating evidence, then – when you say – “it doesn’t paint as clear a picture as we would like to offer the community” it reads like you are going to go spin and manipulate more fucking evidence.

Lt. Gene Ryan, president of the local police union that represents rank-and-file officers, urged people not to “jump to conclusions.”

I think Ryan might feel differently if he spent 6 months behind bars, waiting for a trial because he couldn’t make bail because someone had “jumped to conclusions.” This is the same police department that ran out the clock and interfered with its own prosecutor’s case against the police officers who murdered Freddie Gray while he was a suspect in custody. [nbc]

There is a massive emergent conspiracy among police departments, police unions, prosecutors, and judges, to protect officers from having any consequences for crimes they commit while on duty. In a justice system where prosecutors are willing to look the other way when cops rig evidence, it doesn’t take a huge leap to realize there’s prosecutorial misconduct all over the place when the defendant is a cop. That’s how we see cases where there’s a video that completely contradicts the earlier testimony of an officer, and – surprise – the jury has one hold-out who just can’t be convinced. The judges are in on it, too: Philando Castille’s murderer was acquitted because the judge allowed the officers’ perjured testimony to stand (“He had his hand on the gun”) unchallenged, and blocked the admission of other forensic evidence that clearly showed the officer was lying. I’m going to use words like: “perjury” and “lying” and I’m not afraid to say that video recordings of incidents show that the police lied, and conspired together to establish their stories. In the video above, that’s what’s going on – in order for all three of those cops to tell the same story about what happened, they had to agree what story they were going to tell, because the story they told is not what happened. The press’ reporting of police lies downplays them, too. The press, which serves the interests of the middle and upper class, also has an interest in downplaying police lies. It’s horrifying and bizzare, to me, when I read things like:  [slate]

The forensic evidence and Reynold’s testimony would both seem to back up the prosecution’s account and rebut the defense’s version.

Let me fix that for you, journalism student:

The forensic evidence shows that the police officer falsified his report and lied in his testimony.

I’ve pointed this out, elsewhere, regarding the CIA torturers: for this sort of thing to happen, the whole system has to be in on it. There are logistics that know. There are evidence-rooms that know. There are prosecutors that know. There are cops that stand by with their arms crossed and know their partner filed a report that contains lies. There are people who have access to the logs of which cop cameras are on, and when. Right now there are other cops going through the video from those three cops – what else are they finding? Why isn’t it coming out? If you talked to a cop, off record, you’d hear that this stuff happens all the time. Then, they might say, “its what we gotta do because we know the guy’s dirty.”

What is our recourse when we know the cops are dirty?

In 2007 I was a consultant to Taser/evidence.com on the security properties of the bodycams and the data transport/tamper-resistance aspects of the system. My client was deeply concerned, as they should be, that the system might be altered or interfered with – but I imagine nobody was really surprised when it turned out that various police departments wanted the cameras to be easier to interfere with. For one thing, the cameras don’t need to have an off-switch at all: battery technology is good enough that you can have a camera recording all the time. The cops kept coming up with cockamamie hypotheticals like “what if we encounter something really embarrassing to a citizen? we ought to be able to turn the camera off!” Yeah, riiiight.