The “big lie” is one of the most notorious propaganda techniques. It’s one that wasn’t invented by Edward Bernays, though it’s a logical outcome of his theories.

No serious sociologist any longer believes that the voice of the people expresses any divine or specially wise and lofty idea. The voice of the people expresses the mind of the people, and that mind is made up for it by the group of leaders in whom it believes and by those person who understand the manipulation of public opinion. It is composed of inherited prejudices and symbols and cliches and verbal formulas supplied to them by the leaders. [Edward Bernays, Propaganda]

The cliches and verbal formulas are carried in the media, that’s the message. You can tell rough attempts at propaganda are in place any time you hear the same refrain, “death panels” “it takes good guys with guns to stop bad guys with guns” or pretty much anything Donald Trump has to say. (I think Trump is like a markov-chain propaganda regurgitator AI; garbage in, garbage out, very little thought is going on behind the empty eyes)

This is the kind of pablum that the authoritarian followers are dining on:

It’s from the NRA, of course. But they’re stealthy about it. Since I don’t want any of you to damage your brains or throw up on your keyboards, I’ll transcribe it for you. (don’t thank me!)

They use their media to assassinate real news.
They use their schools to teach children their president is another Hitler.
The use their movie stars and singers and comedy shows and award shows to repeat their narrative over and over again.
And then they use their ex-president to endorse “the resistance”
all to make them march, to make them protest –
to make them scream “racism” and “sexism” and “xenophobia” and “homophobia”
to smash windows, burn cars, shut down interstates and airports,
bully and terrorize the law-abiding, until the only option left is for the police to do their jobs and stop the madness.
And when that happens, they’ll use it as an excuse for their outrage.
The only way we stop this – the only way we save our country and our freedom is to fight this violence and lies with the clenched fist of truth.
I’m the National Rifle Association, and I’m freedom’s safest place.

There entire thing is, as Bernays says, cliches and verbal formulas. There are angry black people facing off against resolute white cops: 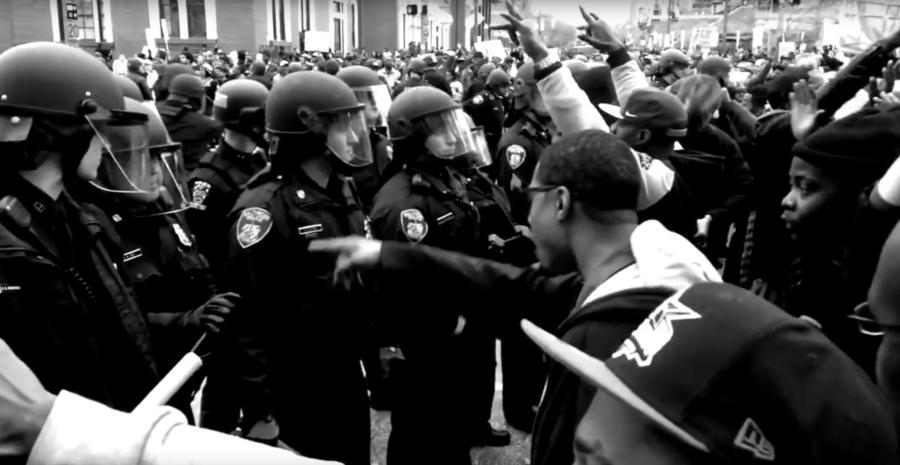 There is the automatically inclusive language of propaganda: they are doing this to us.

All of the negative actions are being done by the elusive they and it’s up to us to FIGHT VIOLENCE. Yes, it’s a war on violence. The listener is assumed to be so stupid that they don’t figure that out. The listener is assumed to be so stupid that they’ve forgotten that one of the main arguments the gun lobby has been giving for years is: guns are needed to protect you against your government if it turns oppressive. Well, after all, they want to see both sides arming up; although the cops are good customers, they won’t be buying more guns, they’ll be getting socialized armaments from the DoD.

Look! They are burning a flag! Bad! Bad!

They repeat their narrative over and over again.

It’s tempting to dismiss this as stupid propaganda, but it’s stupid propaganda because it’s aimed at credulous, shallow-thinking dupes; it’s simple and it hammers home the message that they are out to get you and, I guess that the listener is supposed to connect that to the idea that the NRA is supporting justice and freedom against some kind of oppression.

The subtext, since we’re talking about an organization that promotes gun ownership, must be that guns are what will help with the situation. Of course there is no discussion of whose guns and how: if the viewer was to actually think about this video they would wonder, “Is the NRA saying we good people should go to one of those marches with our guns and, what? How are guns going to help any of this situation? What am I expected to do with my guns?” There is only one way that a gun can be used to stop a flag-burning.

Trying to flip “lies” into “violence” (per the title of the piece) is “I’m rubber, you’re glue” level argumentation, suitable for a 5th-grader. Nonviolent protest is not violence: that’s the big lie of this piece. In general, at the protests, if there’s violence, it’s being done by people with guns, in uniforms, with badges. If there are lies, they are being done on youtube, and twitter, non-violently – by both “sides.”

The political leader of today should be a leader as finely versed in the technique of propaganda as in political economy and civics. If he remains merely the reflection of the average intelligence of his community, he might as well go out of politics. If one is dealing with a democracy in which the herd and the group follow those whom they recognize as leaders, why should not the young men training for leadership be trained in its techniques as well as in its idealism? [Edward Bernays, Propaganda]

Propaganda is a mirror: the propagandist is telling their listener what they want to hear. This is the mirror that America’s gun nuts are standing tall, and proud, and looking into.

Hacking an Election » « Yeah, Fuck Him