Sometimes, you encounter an annoying person who is not arguing honestly with you; someone who just wants to show you how clever or tenacious they are.

Actually, they are tedious, not clever, but your problem then becomes a matter of explaining that to them.

What we have here is a meta-strategic problem, so we generally should turn to (and quote from) Sun Tzu, who had something simple-sounding and obscure to say about every strategic situation:

There is no instance of a nation benefitting from prolonged warfare. – Sun Tzu

You should interpret that to mean, “that annoying person on the internet is going to remain annoying. Realize that they will be so, and realize that engaging in endless warfare with them will not defeat them, or the internet.”  Therefore, the best thing to do is to quickly defeat them and move on. Defeating an enemy, in this case, means removing their ability to annoy you. All paths to that involve controlling their ability to get to you.

He who knows when he can fight and when he cannot will be victorious. – Sun Tzu

This is another way of saying “pick and choose your ground.” If you are playing into your opponents’ strengths, you must be as strong as Godzilla and as immovable as a mountain. If your opponent is playing into your strengths, you can deliver crushing victory even if you are minimally competent. The good strategist will assess whether or not their opponent is one that can be handled, before taking the time to gird one’s loins for battle. Sometimes it is best to stay on the couch.

In terms of internet warfare this means (unfortunately) making a realistic assessment as to whether or not your opponent will leave things on the internet. Or, are they the kind of person who may show up on your doorstep, or engage in a years-long stalking campaign? It’s hard to know whether that’s the kind of person you are dealing with, of course, until after it’s too late. But, you must give it some thought, because you have two main lines of strategy: 1) make them go away gently  2) slam the door on their toe

The only difference between making them go away quietly and slamming the door on their toe is that they will be much more motivated to knock the door open again if their toe is in it. If they are vengeful or obsessive, they are more likely to obsess over the toe. If you’re confident that you can take them, always, then go slam away. This is what Sun Tzu means about “win first, then go to war” – you must decide on your victory conditions, and know a clear path to them, then you can invite your foe to battle. Another way of putting this is: play with a rigged deck. Or a coin with heads on both sides. Or be the asian in a land-war in Asia.

Once you have defined your path to victory and are certain you can walk it, then you can start by irritating the living shit out of your opponent: tell them what you consider “winning” to be. This frames the battlefield for you and not only gives you a head-start toward victory, it may give your enemy a precursor of what is to come: you’ve just told them “I am going to kick your ass and then moonwalk out of here.”  To do this, you must be confident that you have adequately rigged the deck. Otherwise, you have just made your own defeat much more horrible and humiliating.

Define your victory as an engagement on a battlefield where you know you can win. See what I mean? Sun Tzu, himself, is telling you that if you’re fast and your opponent is slow, you want to fight them in a duel of speed. If your opponent is fast, then make them tire themselves out. The only thing you need to fear is if your opponent has snookered you and they are actually, swift, strong, and smart and were just acting the fool to lure you in to crush you. If that happens, you get crushed. 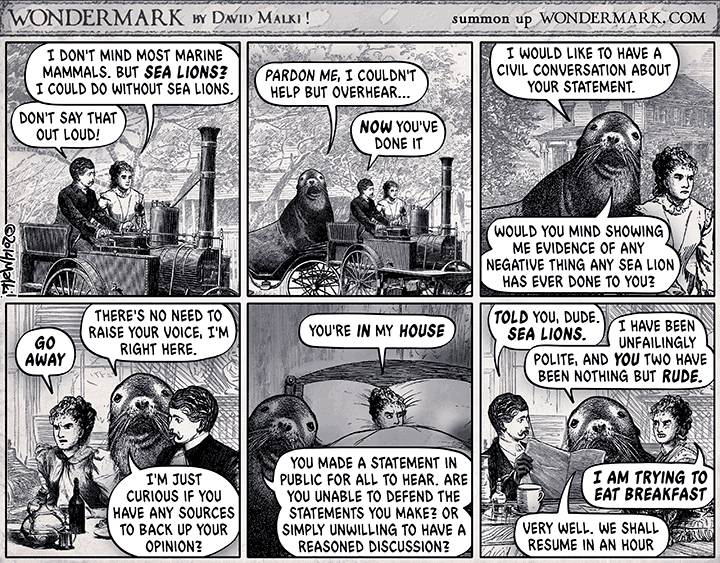 Now, to internet duelling: the most important thing you can do is choose your ground. If you’re unwilling to trade in abuse, a moderated forum where someone who gets abusive, gets banned, is a good place to be. The best – the very best – is a forum in which you control the vertical and the horizontal. For example, a strategy of “get the last word in” is not going to work very well if you’re going against the owner of a blog: they can just delete your comments or even edit them, and you can’t do anything about it.

There are several strategies I encounter fairly frequently on the internet, and they are variations of the same thing. Sometimes they are variously called “sea lioning” but I don’t particularly like the label.

Those are some rough labels, but you’ll notice that they all involve a lot of words that are intended to be variously diversions, attacks against the opponent’s honesty, and trying to be the last person standing on the field because everyone else has gouged their eyes out from boredom.

The worst part about an opponent who has mastered those tactics is that they’re baseline tactics available with a central nervous system: you don’t have to be particularly smart, or educated, or erudite, to bludgeon away with comment after comment after comment. If you’ve noticed – those are internet debating tactics that are popular with science-deniers, alt-woo woos, religious fundamentalists, and authoritarians. After all, if you’re an authoritarian follower, you likely can’t put together a sophisticated argument, because your superior hasn’t given it to you to regurgitate. 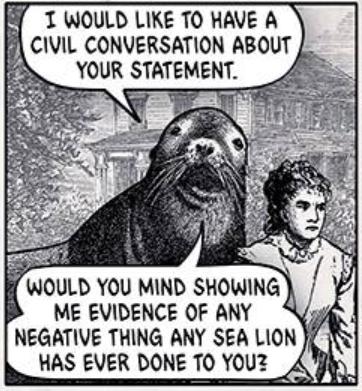 How to handle it? As Sun Tzu says: attack their strategy. First off, you must control the vertical and the horizontal or they will be able to endlessly divert the discussion to their safety-zone. Then, patiently point out a couple times, aiming directly into their strategy:

Sealion: “I would like to have a civil conversation about your statement.”
Me: “I never promised you civility. And since you’ve come onto my blog, my rules apply.” [stderr]
Sealion: “Would you mind showing me evidence of any negative thing any sea lion has ever done to you?”
Me: “I never offered evidence. Perhaps my disliking of sealions is on purely aesthetic grounds.”

Me: “I’ve decided to delete all your thoughtful comments because I think they’re a waste of my time. So, g’day.”

One time on the Frontier Designs Elite Dangerous forum, a fellow started the opening moves of a sealion-style maneuver against me. I checked quickly: do I control the vertical and the horizontal? Yes: as the owner of the thread I can delete comments, and I can edit my original posting or delete it entirely if I want to. So I engaged for a while. The sealion responded with – I kid you not – a couple comments totalling several thousand words of text. Unopposed, the sealion began making incorrect inferences and began labelling people on the thread. [Elsewhere in Argument Clinic we discuss Labelling: stderr]  A simple destroying parry [Argument Clinic: Destroying Parry: stderr] served only to incite dozens of follow-up comments, going on for pages. So I posted back a comment:

Me: “This seems very important to you. But it seems like a minor disagreement about terminology.”
Sealion: “Terminology is important!! (2 pages of gleefully hammering home points already aired)”
Me:  “Well, since this is my thread and I think you’re boring, I’m going to delete all your comments.”

Of course, I blocked them, too, which triggered them doing a posting about what a horrible human being I was, which then got them banned from the site for attacking another member. 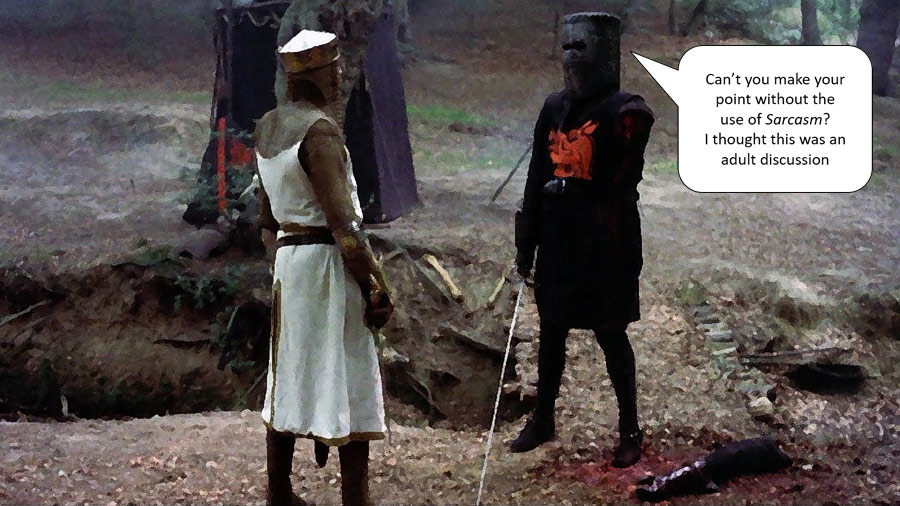 As you know, here at Argument Clinic, we’re big fans of going “meta” so that’s always an option. You can try to slice directly into their arguments by categorizing them, as I did above, and attempting to preempt them individually. That’s an option if you’re a very patient person who has a lot of free time and good carpal tunnels. Preemptively categorizing your opponents’ prospective lines of attack is a form of well-poisoning attack and I generally consider them weak since an opponent with moderate situational awareness will step around your labels. At the point when you are up against that kind of opponent, you need to acknowledge that they are basically “Black Knighting” you – which is to say: the Black Knight never admits defeat and tries to win by attrition.

President Trump excels (because he is stupid and it’s his only option) at the black knight’s tactics: simply keep at it and keep at it until eventually your opponent realizes that they are in an endless loop with a complete jackass.

You must realize that many sealions’ strategy is to be the last person left holding the field. That’s all they have, really, so they’re prepared to be patient and infinitely tenacious. That’s why you must make sure you control the vertical and the horizontal before you engage with them.

This post is dedicated to Becky’s friend Bill K, who will probably never read it.

“Frontier Designs Elite Dangerous forum” – specifically: a straightforward whine in response to a comment I made about gender representation in games, “oh, you social justice warriors are taking the fun out of everything…”  Oh, really? Yawn.