I periodically post this in comments on other blogs when the topic comes up. A lot of Americans are ignorant of the law regarding torture, and are kept that way, deliberately. Let me clear that up a bit for us all.

The UN Convention on Human Rights was ratified in 1987. [wikipedia] The US became signatory April 18, 1988.

1. No State Party shall expel, return (“refouler”) or extradite a person to another State where there are substantial grounds for believing that he would be in danger of being subjected to torture.

2. For the purpose of determining whether there are such grounds, the competent authorities shall take into account all relevant considerations including, where applicable, the existence in the State concerned of a consistent pattern of gross, flagrant or mass violations of human rights.

The US has engaged in conspiracy to torture under the guise of “extraordinary rendition” since the first Clinton administration, and the program has expanded considerably since then. [aclu][wikipedia] One of the places that people were sent was Syria, so when the US Government says that the Syrian Government are horrible people who keep private torture chambers, they know what they are talking about.

But that’s all fluffy Frenchified international law, easily brushed aside by a bloody-minded US president who just wants to make someone suffer in order to appreciate America’s power.

What most Americans don’t know is that torture and conspiracy to commit torture are capital crimes under US law as well:

(1) “torture” means an act committed by a person acting under the color of law specifically intended to inflict severe physical or mental pain or suffering (other than pain or suffering incidental to lawful sanctions) upon another person within his custody or physical control;

(C) the threat of imminent death; or
(D) the threat that another person will imminently be subjected to death, severe physical pain or suffering, or the administration or application of mind-altering substances or other procedures calculated to disrupt profoundly the senses or personality; and
(3) “United States” means the several States of the United States, the District of Columbia, and the commonwealths, territories, and possessions of the United States. [law library]

Whoever outside the United States commits or attempts to commit torture shall be fined under this title or imprisoned not more than 20 years, or both, and if death results to any person from conduct prohibited by this subsection, shall be punished by death or imprisoned for any term of years or for life.

(b) Jurisdiction.—There is jurisdiction over the activity prohibited in subsection (a) if—

That’s about as clear as a searchlight shining right in your face:

“We tortured some folks. We did things that were contrary to our values.”

And Barack Obama decided to “move forward” instead of “looking back” regarding a capital crime – a massive criminal conspiracy – under US law. The first rule of conspiracy club is: you’re either in the conspiracy or you’re not.

As David Morrison eloquently said:
“The standard you walk past is the standard you accept.”
In fact let me quote a bit more of Morrison:
“Their behavior has not only brought the [Australian Army] into disrepute, but has let down every one of you and all of those whose past service has won the respect of our nation.”

The US’ policy on torture guarantees that any captured US service or diplomatic personnel will be subjected to torture. Why not? “It’s how things are done,” as Barack Obama says. The US political establishment is more concerned with protecting “their guy” than seeing justice done, so since the two parties that control the country have both had presidents involved in torture, “we’ve got to look forward, not back” Because forward is the next election.

The complicit, cowardly, media has played along with successive administrations’ use of weasel-words like “extraordinary rendition” or “enhanced interrogation techniques” and has helped fig-leaf the illegal actions of politicians. Meanwhile, they bay like chihuahuas howling at the moon about Clinton’s email server or Jared Kushners’ sleazy business practices, while allowing a massive criminal conspiracy to pat itself on the back and look forward, not back.

Re: “extreme rendition” – I loathe the way the bureaucrats of cruelty and war come up with terms that deflect and diminish their crimes. It’s “conspiracy to torture” not “rendition,” call it “Sonderbehandlung” motherfuckers.

I wonder if Morrison wrote that speech himself. Whoever did, it’s a doozie. And it’s kind of hard to watch his delivery and think “oh he doesn’t mean that.”  Unlike President Obama who suddenly goes all ‘southern’ “We tortured some folks.”  That most un-presidential moment in the career of someone who won the Nobel Peace Prize. The Nobel Committee should have called him and asked him to “Fedex it back tomorrow, please.”

Any officer of the law, who is sworn to uphold the law, ought to cuff and perp-walk any US President, AG, or CIA director that they encounter, at any time, and extradite them to The Hague. That is called “Extraordinary Shit Hitting The Fan” and it would be glorious.

I posted this before, but it bears repeating: [stderr]  Naive Americans have bought the ideal that WWII was a fight to save the world from a great evil. Among that great evil’s many sub-evils was this one, which the US government has been enshrining, conspiring to commit, and colluding to conceal: 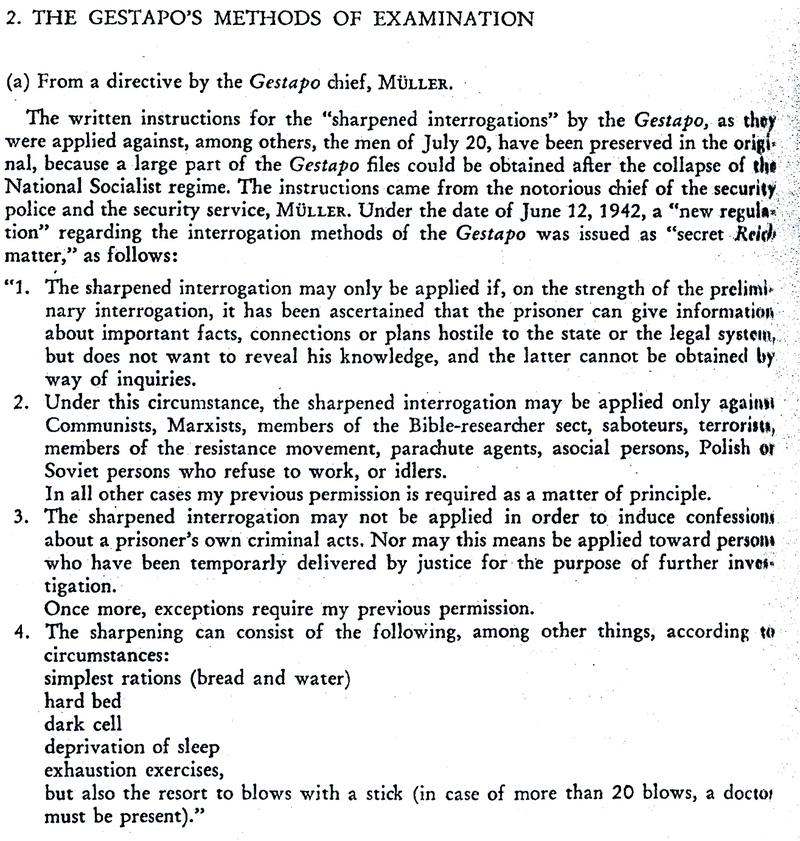