Russia Times had a now-famous “meet and greet” conference like the Milken conference. [stderr] And there are some fun pictures of the attendees…

NBC has the best set of pictures from the event: 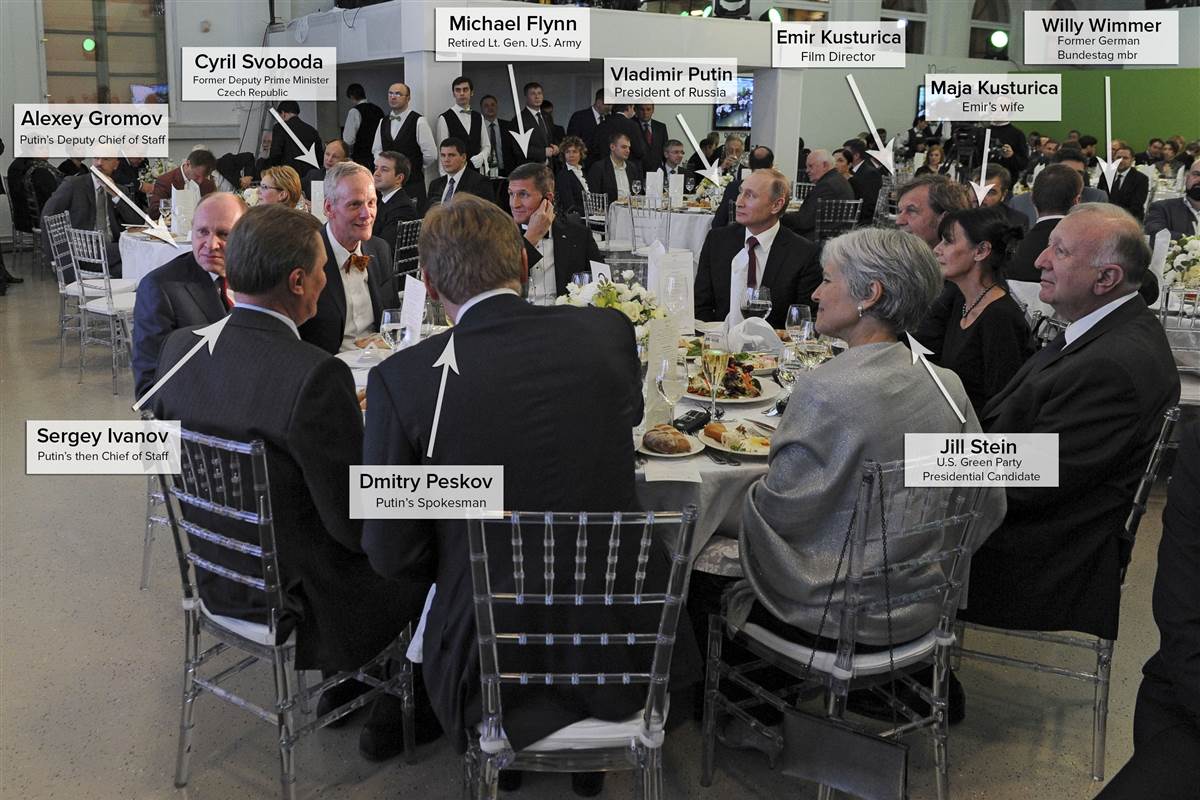 Flynn apparently got about $45,000 (sad, they could have had Richard Dawkins for another $10,000…) Makes you wonder what Jill Stein got, doesn’t it? (Stein is not listed on the allamericanspeakers.com site)

It’s actually kind of uncool, that the big shot speakers are all sitting at the same table. There are other people who paid good money hoping to have a chance to get some elbow-rubbing with Vlad I. And the speakers are all congregating where they can be seen, but not interrupted. I’ve done conference keynotes and usually conference organizers (the good ones) will tell the keynotes to spread out among the tables, please.

The conference announcement and agenda are here: RT Conference. I can see that congress and the White House and the FBI and everyone lot of research to do, to figure out that Flynn was misrepresenting his trips to Russia. Maybe they should use Google instead of Bing, or whatever the NSA uses on their data-pile.

In fairness – nobody should care about Flynn’s pocketing a bunch of $$ to do a table-dance in Moscow – it’s like the Clinton email thing: Flynn should have said “I was paid to do a dinner along with a bunch of other people, went and got drunk and shook hands. Everyone does it.”  It only becomes a big deal when you appear to be covering it up. Oh, look, Julian Assange was on the guest list! I guess he phoned it in from the embassy – I wonder how much he was paid? You can bet Assange is pricing way above Dawkins; he’s probably up in Sam Harris territory. 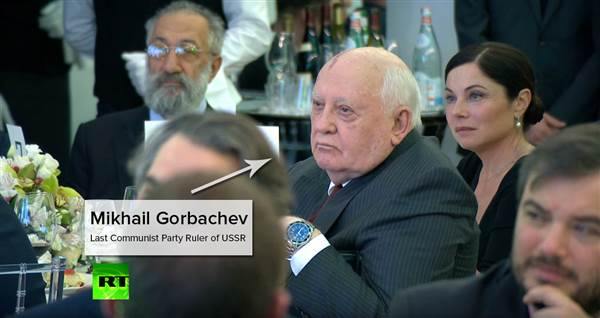 I wouldn’t mind a chance to talk to Gorby. He looks sad and ignored over there. I bet he’s got some interesting stories that he’s had to tell over and over and over. I’d ask him about the morning he got the call from Sweden and learned about the Chernobyl explosion. I can’t imagine the bureaucratic nightmares that man experienced; his head must be a tornado of amazing stories. I hope someone gets to do exhaustive interviews of him before he leaves life.

Another thing that’s funny about the conference is the talks seem pretty apropos today’s news: (don’t bother listening to all of it; he just trashes US Middle East policy)

“So they say there’s an infowar going on…”  This is a panel of media airbags talking about information and disinformation. In December 2015.

A bunch of English and American media figures talking about information and disinformation, at a conference sponsored by a Russian media company in Moscow, in December 2015.

It’s kind of a shame Comey wasn’t invited. It would have saved the FBI some investigaty thinky stuff, of which they appear to be in short supply.

“Is there anyone in this room who doesn’t think we are in an infowar?” the moderator asks. No hands go up.

Two years later, the media is wringing its hands about infowars. Give me a break, you not only saw it coming, you announced it.

I don’t necessarily think these sorts of conferences are a bad thing. For one thing, they’re a good way to keep aging dictators off the street, where they won’t mess things up worse. Can you imagine what the declining years of Trump are going to be like? He’s such a money-grubber he won’t be able to pass up the chance to talk himself up to the rolaids-munching set, who sit glassy-eyed, hoping to get a chance to ask him if he could make an introduction to President Kushner.

There have been periods in my life where I have been a professional conference-goer. I don’t get paid anything like what Dawkins or Schneier or Krauss get, which is probably why I used to do a lot of conference talks. Maybe I should have raised my rates. But the truth is, as much as I hate traveling and hotels and bad food, I love to teach about my field, and I’m still passionate about it, and I see the world as my classroom.

This posting is probably more about emergent conspiracies than anything else. What you see here is a media company (albeit sponsored by a government) and its peer media talkbags, talking about how they can influence government. Hurr hurr hurr. This is the same media that is shocked, shocked I say to discover that the reality TV fake kaiju that they helped create is now stomping around doing incalculable damage. Watching these gits talking about how important the media is in manipulating public perception is like watching a couple of teenagers preparing to drop a bowling ball onto a freeway “to see what happens.” These people are not conspiring with the Russian government; they’re just part of a general overall push in a certain direction, which the Russian government, and Donald Trump, and others did — they all sort of pushed in that direction and discovered that their interests were aligned. I don’t believe that Flynn was being sneaky – he looks like any other blockheaded ex-military authoritarian kool-ade drinker – Flynn was there for the money and was telling the truth as he sees it. They all were. There is no evil committee meeting in a back room and deciding how to manipulate the US Election – it’s more like a flock of chickens all clucking around about manipulating elections, and there was so much clucking, it kind of happened. Emergent conspiracy.

Conferences like Interop used to have a private speakers-only dinner – usually someplace with much better food – as a make-up so the keynotes and speakers could hang out and not have to worry about being interrupted. There are people I see once a year at certain events; it’s kind of a running joke. Whit Diffie and I have been carrying on a conversation for years, intermittently, we just pick up where we left off as if there hadn’t been an intervening twelve months. What’s fun is as things like the Vault 7 and Shadow Brokers drops happen, the conversation also changes as new information comes in over time.

At least Flynn knows not to manspread on a panel.

Back to The Helmand » « How Needles Are Made