Ross, speaking at an economics conference in California on Monday, recounted the scene at the Florida estate when Trump interrupted dessert to inform Chinese President Xi Jinping that the US had attacked a Syrian airfield.

“Just as dessert was being served, the president explained to Mr Xi he had something he wanted to tell him, which was the launching of 59 missiles into Syria,” Ross said, according to Variety. “It was in lieu of after-dinner entertainment.”

The magazine reported that the audience laughed at Ross’ recollection of the evening. He added: “The thing was, it didn’t cost the president anything to have that entertainment.”

Ross, the billionaire investor with no prior government experience, made the remarks during a discussion at the six-day Milken Institute Global Conference in Beverly Hills, California.[guardian] 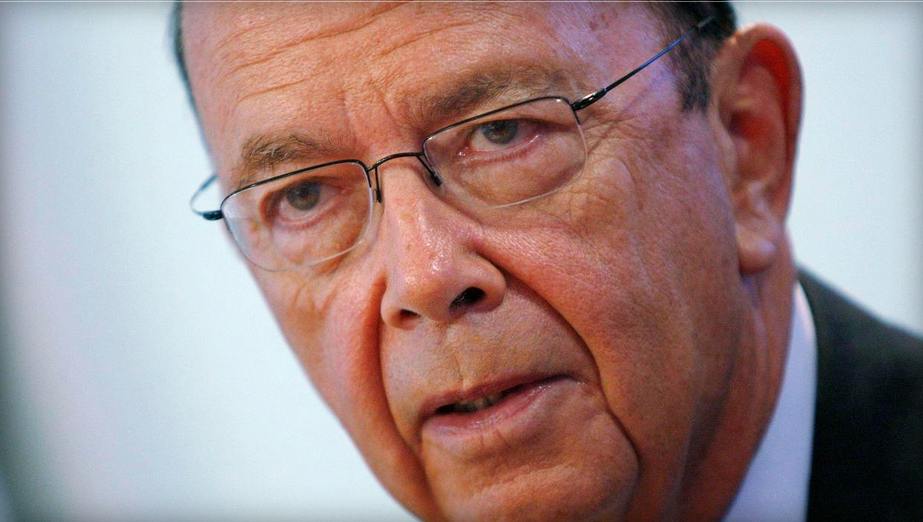 Aaahaaahaaaaa, that cracked me up. Actually, that’s a lie. I find that oligarchies ruin comedy – it’s hard to tell if the laughter is real, or if it’s just that your audience are sucking up to you because you’re a billionaire and they’re hoping for some of your action. If something incredibly unexpected happens and I find myself very rich, I’ll have to remember to hire a “writer’s room” full of professional funny people to write my lines, so I don’t sound like the kind of horrible excuse for a human being that makes jokes about bombing people. Even that’s probably not a great idea; someone wrote that snappy “we came, we saw, he died” line of Clinton’s.

What caught my eye was the “Milken Institute Global Conference” [conf] and, because I am insatiably curious and love doing internet investigations, I decided to see if it was that Milken. You know, Michael Milken, “The Junk Bond King” who helped usher in the era of high yield bonds and ‘asset stripping’ that devastated American businesses in the 80s. And, yup, sure enough, it is. Milken, since he’s now a billionaire ex-felon fraudster, has re-invented himself as a great guy. I took a look at the speakers list and the attendee packages and it looks like Milken’s philanthropy extends to the “cash for access” shoulder-rubbing corporate leech-pool. What Trump would call “The Swamp” except his mouth is too full of green slimy water to talk about swamps to anyone who’s standing on dry land.

Here’s how you can attend: 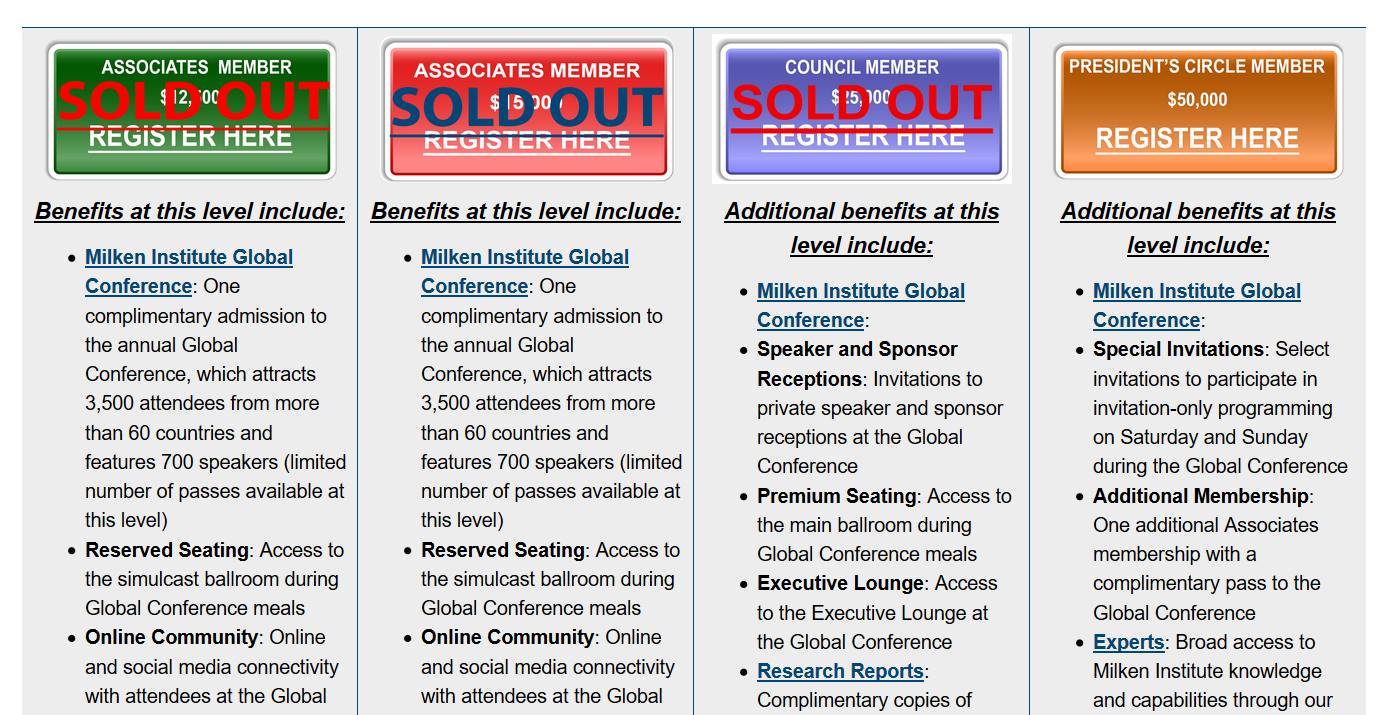 If you plonk down a measly $12,000 you have a chance of bumping into a real, honest-to-goodness oligarch in the hallway! And you can knuckle your forehead to them and say “‘day sorr…” as their retinue goes by. If you pay the full $50,000 (note the last item:) you get “invitation-only programming” and access to experts. That’s code for “pay for access” – it’s just a lower-rent version of what Trump is doing at Mar A Lago, which has a $250,000+ cover charge.

If you do the math – 3,500 attendees even if they only paid the basic $12,000 gate fee – that’s a cool $42 million. Of course that’s not all profit for the Milken Foundation: the VIPs get paid “speaker fees” to come. And you gotta know those are substantial. I looked around for Wilbur Ross’ fees and couldn’t find a quote – you’ve got to have your PR person contact his business manager and arrange it all hush-hush. It’s only the hard up or the tacky that put a specific amount in their speaking fee, up front: 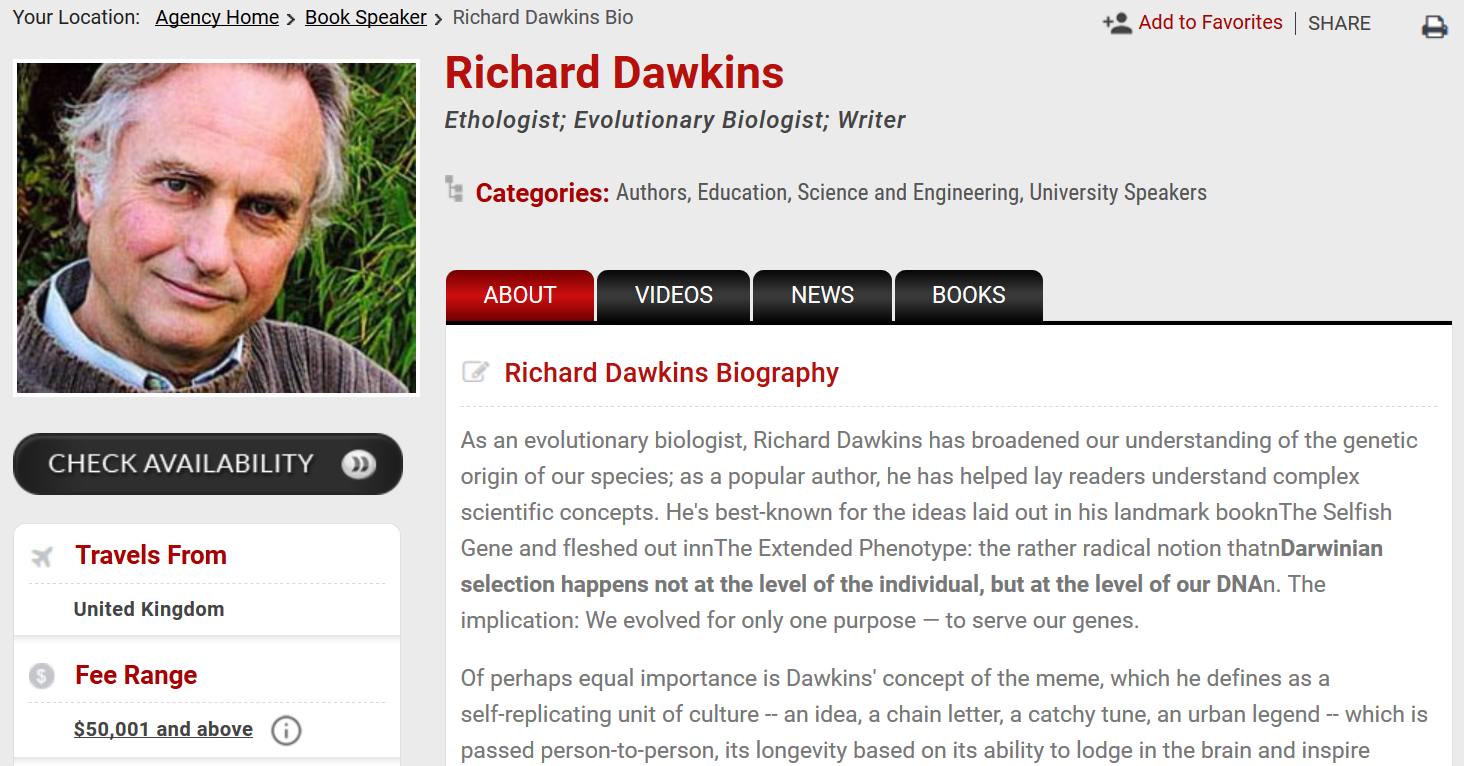 This sort of event is nothing new. I have to somewhat embarrassedly admit that I went to one of the “Renaissance Weekend”s back in 1998 – held in a beautiful resort in Vail, Colorado, with great food and amenities. It seemed interesting (at first) until I discovered it was like TED except boring as hell. In TED, you’re invited to talk about some bullshit that you’re doing that they think is interesting. At a renaissance weekend, the invited guests come talk about whatever the guest thinks is interesting. So, I went to one session, which was a famous attorney talking about the difficulty and expense of having parts machined for his boat, then sulked in the hot tub and the bar for the rest of the weekend. The company that spent $6,000 for my ticket, plus the ridiculously expensive hotel – they did not get their shareholders’ money’s worth… 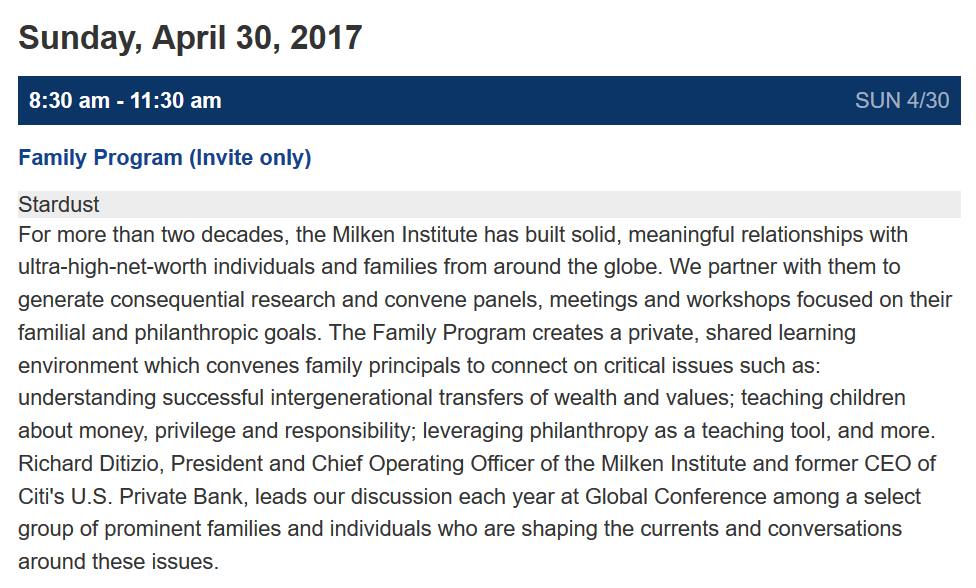 This panel may as well be named “Your money is lonely; we’ll help it find someone to talk to.” If it sounds like a session where people who want money can meet up with people who want to spend money, you’ve got the gist of it. To be fair, in many cases some of these are going to be totally legitimate things – some scientist with a great idea might be able to buttonhole a rich patron of science and get the crucial 5 minutes to bend their ear and maybe get some research funded. Or some scientist might get to meet a billionaire and go for a fly on their flying teen-ager fuck palace, or something. It’s how to make friends and influence people.

It’s how people’s souls are bought and sold.

Wilbur Ross’ soul was sold long ago, so there’s nothing to worry about other than the question of “how much was he paid for that speech?” which is probably closely held information. Especially since Ross’ jokes suck.

This stuff sounds very serious. But a subtext is: “where is the government going to be spending money, and how can you step in the path of those falling buckets of money?” 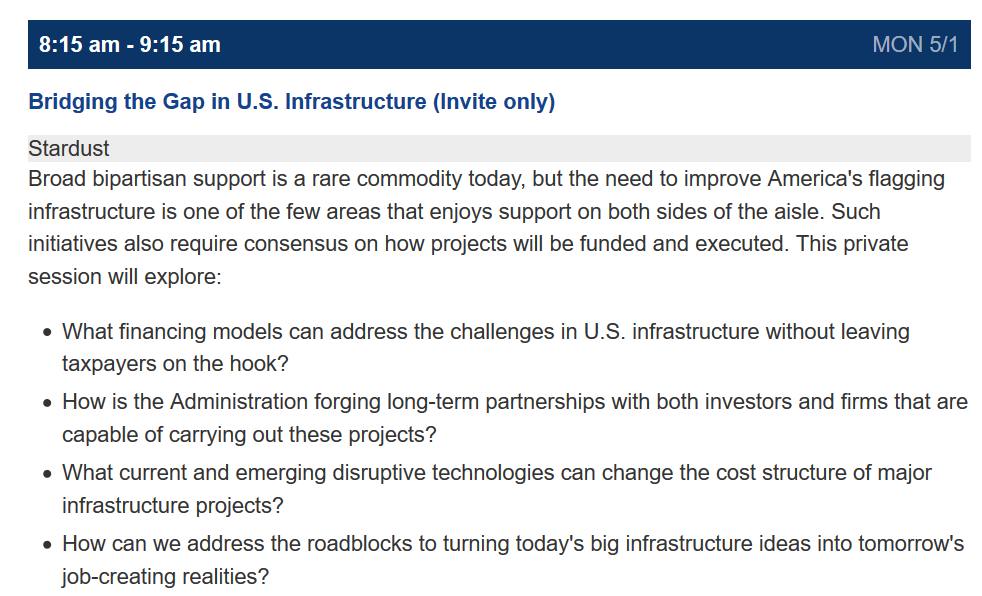 If you look at the speaker lineup for the conference, it’s mind-blowing. Everyone who is anyone is going to be there, from Kareem Abdul Jabbar to Betsy DeVos to Buzz Aldrin to Jamie Dimon to Wilbur Ross and – a great big choking wad of CEOs: Cisco, Chase Manhattan, Barings – state governors, and startups, pre-IPO startups, new media companies, etc. I checked and there are no Kardashians. But this isn’t that kind of event: these are the people who hire Kardashians and tell them where to go and what to wear.

I’m not saying there’s anything wrong with this, necessarily, but when someone gets upset about Hillary Clinton’s speechifying, or Barack Obama’s speechifying – that’s the tip of an iceberg: a lot of people are hopping onto and off of the gravy train as it wends around. Some are paid to ride, some pay for the ride, but either way, it’s a ride: it’s a chance for the has beens to meet the wannabes, for the world-weary unscrupulous patricians who’ve been successful to meet with the lean and hungry-looking next generation. This is where all the business cards get swapped (and thrown away later) and the golfing outings get arranged (“have your EA call mine, let’s set it up!”) it’s where supreme court justices get invited to premier hotels for a weekend of quail hunting and gorging themselves to death, or taking a flight on the billionaire pedophile’s teeny-fuck palace. It’s capitalism. It’s loathsome.

If I ever were to be a plutocrat or a politician, I’d like to think I’d just cut to the chase and not even speak to people – I’d just send Doug Stanhope to give my speeches. He doesn’t need a teleprompter.

Supporters, like George Gilder in his book, Telecosm (2000), state that “Milken was a key source of the organizational changes that have impelled economic growth over the last twenty years. Most striking was the productivity surge in capital, as Milken…and others took the vast sums trapped in old-line businesses and put them back into the markets.” [wikipedia]

Junk bonds and asset stripping did not ‘put the vast sums trapped in old-line businesses back into the markets’ – they were about doing leveraged buyouts using derivative loans to buy up businesses that carried large amounts of money on their balance sheets (like: pension funds and factories) then break them apart and sell them off piecemeal, using the cash and quickly liquidatable assets as collateral to get larger loans to buy larger businesses. Milken helped invent the techniques for putting capital back into the markets by slashing and burning companies smaller than mega-corporations (which the mega-corporations were pretty happy about) – he made a few mistakes in his otherwise perfectly legal baby seal-clubbing and was convicted, paid a $600 million fine (which was about 30% of his worth at the time) and now he’s a philanthropist. Ask the people whose pensions were liquidated in the 80s what they think of his philanthropy.

“they did not get their money’s worth.” I was on the board of directors of a publicly traded company (NASDAQ: NSSI) at the time. They thought I might make some useful contacts, so they sent me. That sort of thing is the kind of perks that directors expect (in addition to stock options and friends and family stocks in IPOs) – I turned out to suck as a fat cat director because my idea of a great time was having everyone leave me alone so I could read a good book.

Allamericanspeakers.com [aa] Those sorts of sites have not necessarily got a booking relationship with a particular speaker. Some of them do, some of them don’t. Some of the speakers are probably in the “if you’re serious, we’ll try to find out” range – because the booking agent’s fee can get substantial. Henry Rollins used to describe his agent as “10% of your action guy” (I checked, Hank’s not on that site)