There was some discussion of needles over at Caine’s [affinity] about how needles are made. I’m sure you’ll enjoy this!

It starts slow but it gets better when they start with the machines.

So, I was wrong about the needle being formed by folding and press/welding the material. 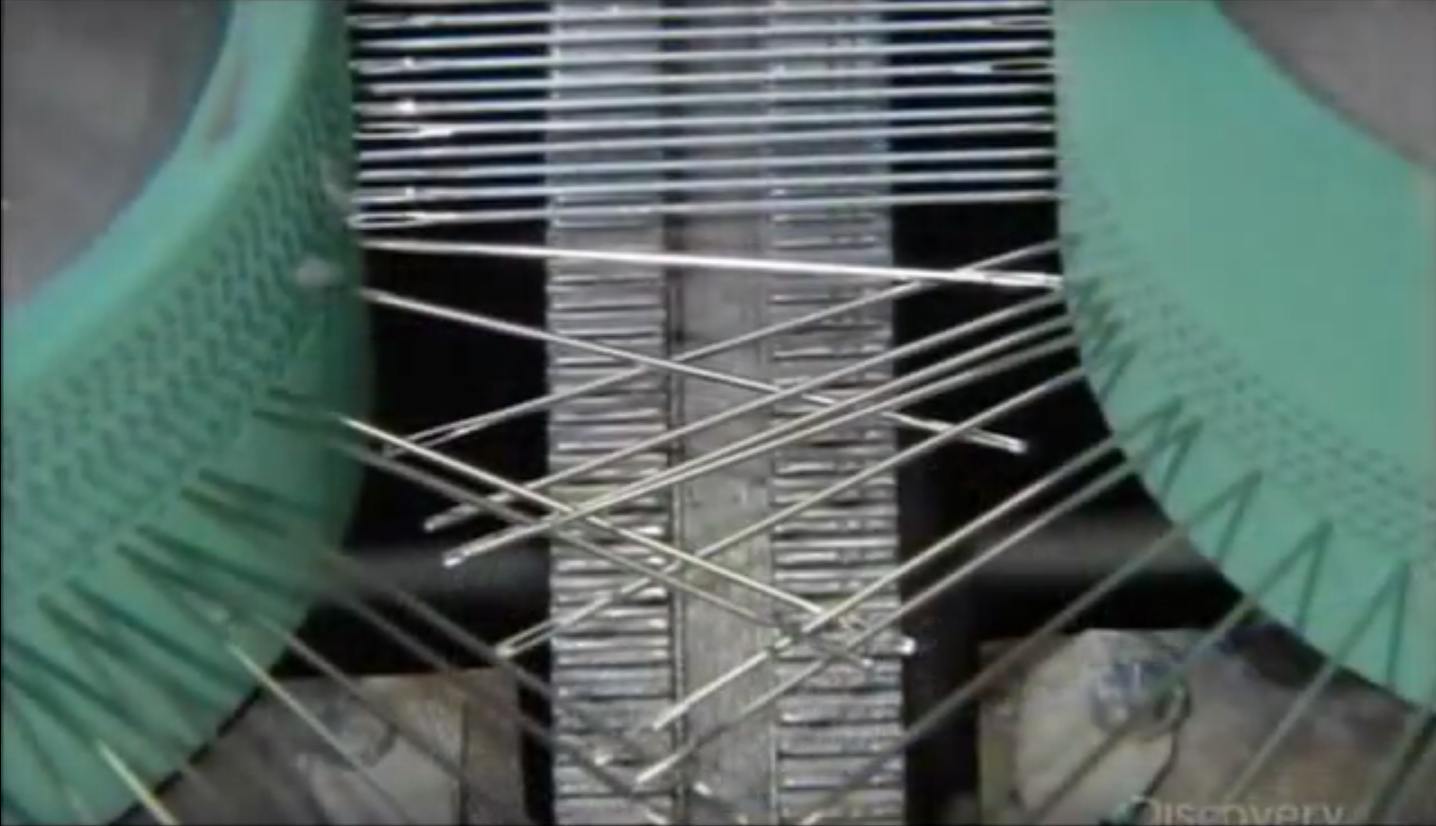 The way industrial processes evolve is so cool. It’s a constant process of tweaking things until they finally work just right, then “ssh! don’t touch it!” some parts are hands off, some parts are hands on, it’s optimized so that the machines do what they’re good at and the humans oversee the whole thing.

I didn’t realize that gold-dipping the eye-end of the needle was to make it easier to see the hole; I assumed it was decoration to justify a higher price. Watching the process also shows why needles aren’t stainless steel: some of the operations the machine does would be painful if you were using stainless stock; for example the polishing probably wouldn’t work at all.

It’s also interesting to see how they haven’t figured out a reliable enough and cheap enough quality check; a human has to review the product and pass it on. Back in the 90s I worked with a guy who had designed robotic bottling lines for Seagram’s and he explained that it was all completely automated. All those little nubs and stuff on the bottles? They’re to make sure the bottle rotates to the correct direction, so the cameras can “see” and make sure the fluid levels are correct. Think about it: when you’re building a robotic system that’s completely automated, it’s failure path has to also be completely automated. So, when your whiskey-level sensor decides a certain bottle is too low, something has to be done with it – you need a routing system that flips that bottle into a different line because the product is worth keeping. That probably doesn’t apply with needles. Industrial process-lines are carefully optimized along an inner cost/benefit/speed analysis. 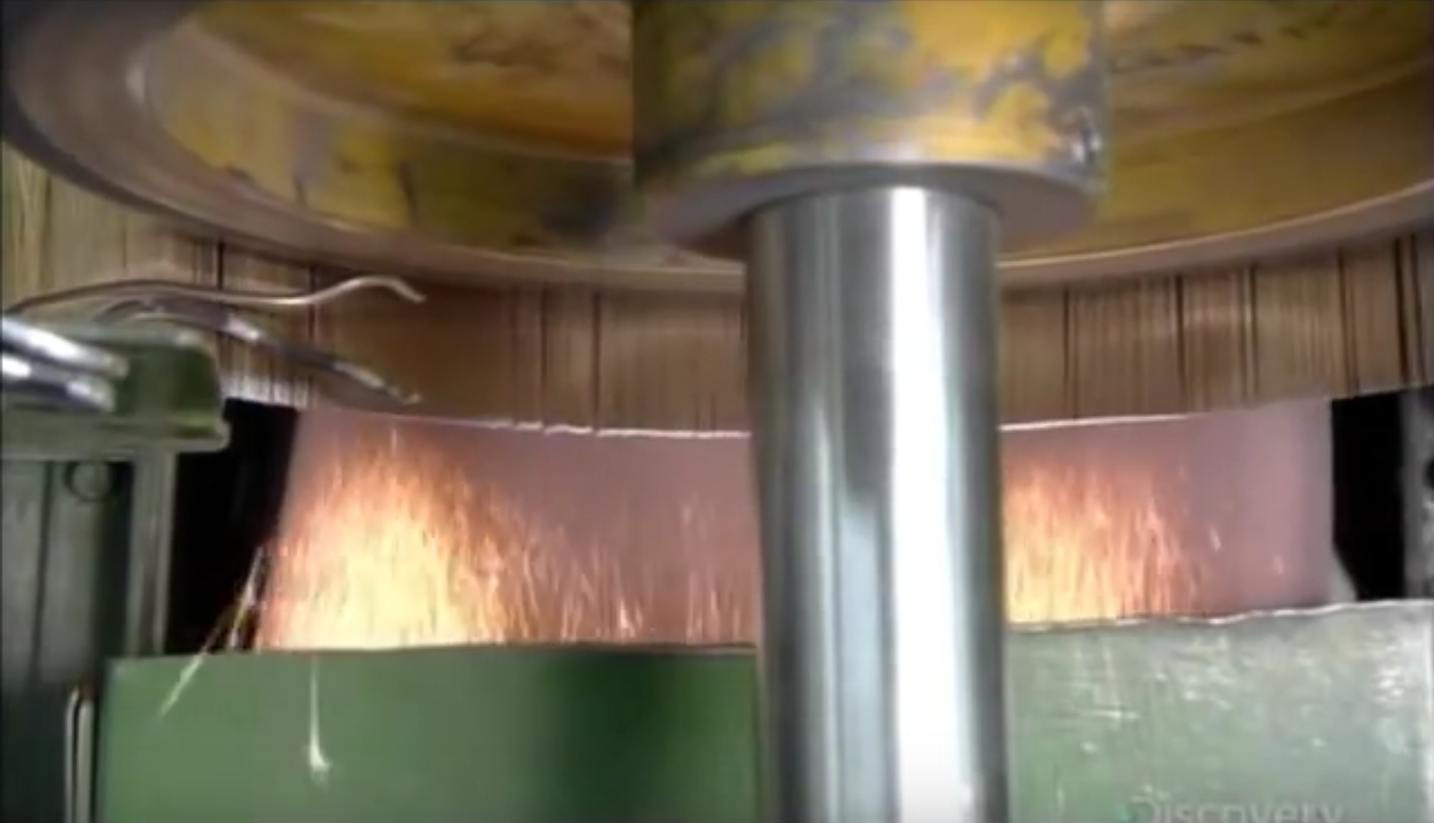 gang-grinding an army of needles against a wheel

I’d love to see how this process evolved. It probably started from a jig that a needle-maker held the stock in, while they ran it against a wheel.

When I wonder such things, I have two “go to” sources – one is the Encyclopedie of Diderot and D’Alembert and the other is the Encyclopedia Britannica 11th ed. Diderot’s encyclopedia is a great portal into industrial processes circa 1770. The Britannica is circa 1910 and it’s on Project Gutenberg. [wikipedia link farm is prettier] 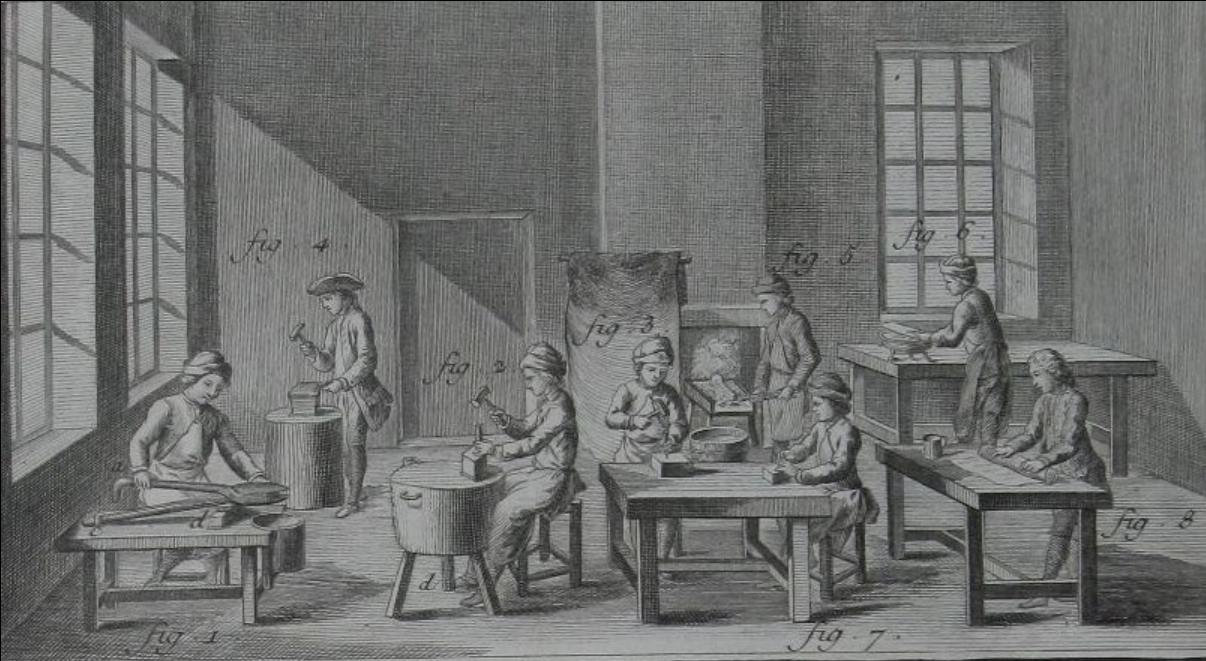 You can see the fellow over at Fig. 8 is painting the needles with abrasive and binder and rolling them up in a piece of leather. The machine you saw in the video is half-automating a very time-honored process. 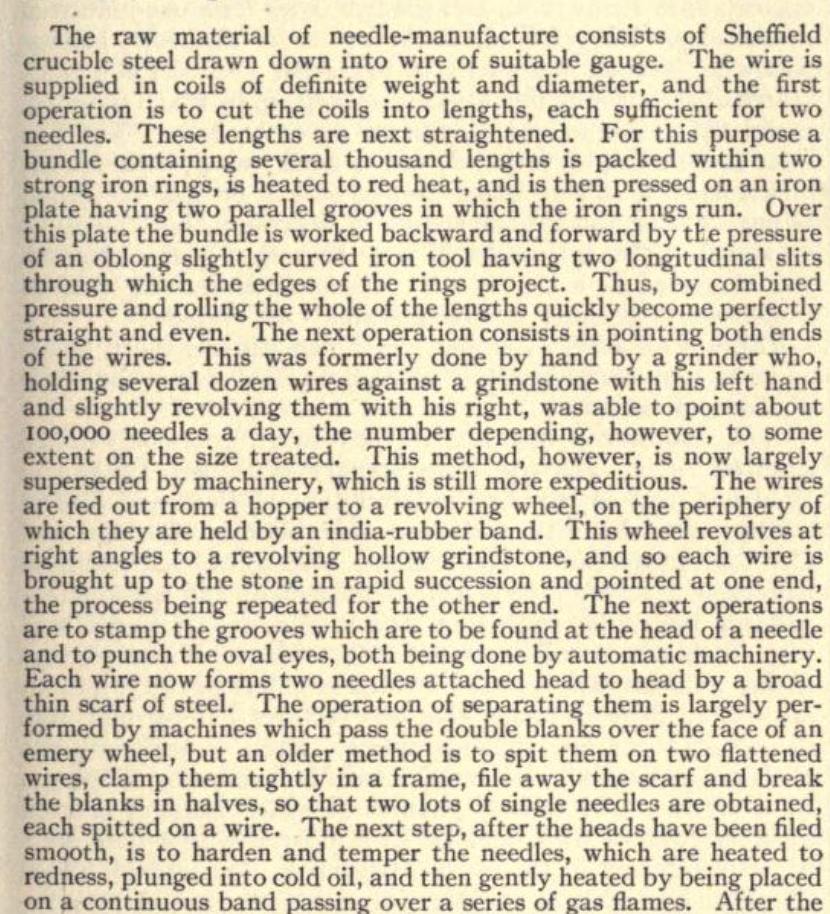 As I expected, the Britannica describes a transitional form of needle-making. It describes how they did it in D’Alembert’s day, and the newer improvements.

I did not know that steel needles were introduced to Europe by the moors. See what happens when you have muslim immigration?

By the way, the screenshot from the Diderot encyclopedia is from Ebay (another place I often search for illustrations). You can have it for $15. There are horrible people who buy old books like the encyclopedia and break the binding apart, then sell the individual engravings as standalone artworks. I remember times my father would grab my hand and haul me out of an antique store in Paris or England, because the store was carrying ‘broken’ books that had been ‘asset stripped’ instead of preserved intact as they should have been.

You used to be able to get copies of the Encyclopedia Britannica 11th for $200-$400 on Ebay. I don’t know what it runs now, but it’s a great gift for the nerd of your heart. My dad’s edition had the backs eaten by mice one summer and he hired a friend of his who did 18th century-style bookbindings to re-bind them. They’re stunning, and they kept Mr F__ busy for 2 years. If any of you ever want me to look something up for you, just holler and I’ll pop the correct volume off the shelf and take some pictures with my iPhone.

The 11th edition is beautiful – you had some of the great lights of the day writing the articles, such as Albert Einstein doing the section on Physics. That was actually in continuation of a tradition started by Diderot, in which he got the sections done by the great students of the fields. Voltaire wrote the section on Philosophy (naturellement!) and was so inspired by doing so, that he went and did his own encyclopedia of philosophy (single-handed, naturellement!) which occasionally features in this blog. You can actually find old editions of Voltaire’s encyclopedia on Ebay for surprisingly reasonable prices. I think I paid $400 for my first edition, in 1999.

Where the Plutocrats Go to Milt – 2 » « World Press Freedom Day