Freedom of Speech is not some magical thing: like all freedoms in politics, there’s got to be a justification for it. In the case of the US – on paper, at least – individual liberties are defined in terms of, “other than the things the state says you cannot do, you’re free.”  So, because the state has not legislated that I cannot dye my hair blue, I can dye my hair blue. Freedom of speech is specifically called out, though, as a positive freedom. It’s not that “because the state has not told you what you can’t talk about, you can talk about anything else” – it’s specifically stated:

Congress shall make no law respecting an establishment of religion, or prohibiting the free exercise thereof; or abridging the freedom of speech, or of the press; or the right of the people peaceably to assemble, and to petition the Government for a redress of grievances.

That’s pretty clear. Though I’d rather religion was at the end of the sentence somewhere, but we need to remember that in the broader context of the US’ history, freedom of worship was a biggish deal. Freedom of speech was also a big deal. I’m not into trying to interpret “what the founding fathers meant” but I feel that the 1st Amendment ties free speech with political activity, i.e.: the right to assemble peaceably and petition. This all makes sense in context; at the time the US was founded, political tracts like Thomas Paine’s “Common Sense” were widely distributed and read – in spite of illiteracy, some estimates I’ve seen are that over 60% of the colonial population had read Paine or heard Paine read aloud. That beats Game of Thrones pretty handily. Political speech needed to be protected because elsewhere in the world, the King could simply order you to the Bastille if you made the wrong snarky remark.

Voltaire, one day, was walking in a park in Paris when he encountered the Regent. Having recently written the “Henriades” – a poem making fun at length of the Regent, implying the Regent planned to usurp the throne – there was some awkwardness as Voltaire bowed sweepingly and the Regent commented that Voltaire was quite a wit. Voltaire agreed, and the Regent said, “I wager I can show you something you have never seen before.”
“Ah, what is that, Sire?” returned Voltaire.
“The inside of The Bastille.”
And so it was that Voltaire wound up in prison for the first time in his life. Upon his release the Regent gave him a payment as a sort of apology and stipend and Voltaire wrote him a nice letter thanking him for the money – and his freedom – and observed that “Now that you have taken care of my financial needs, I would be happy to arrange my own lodging from now on.” 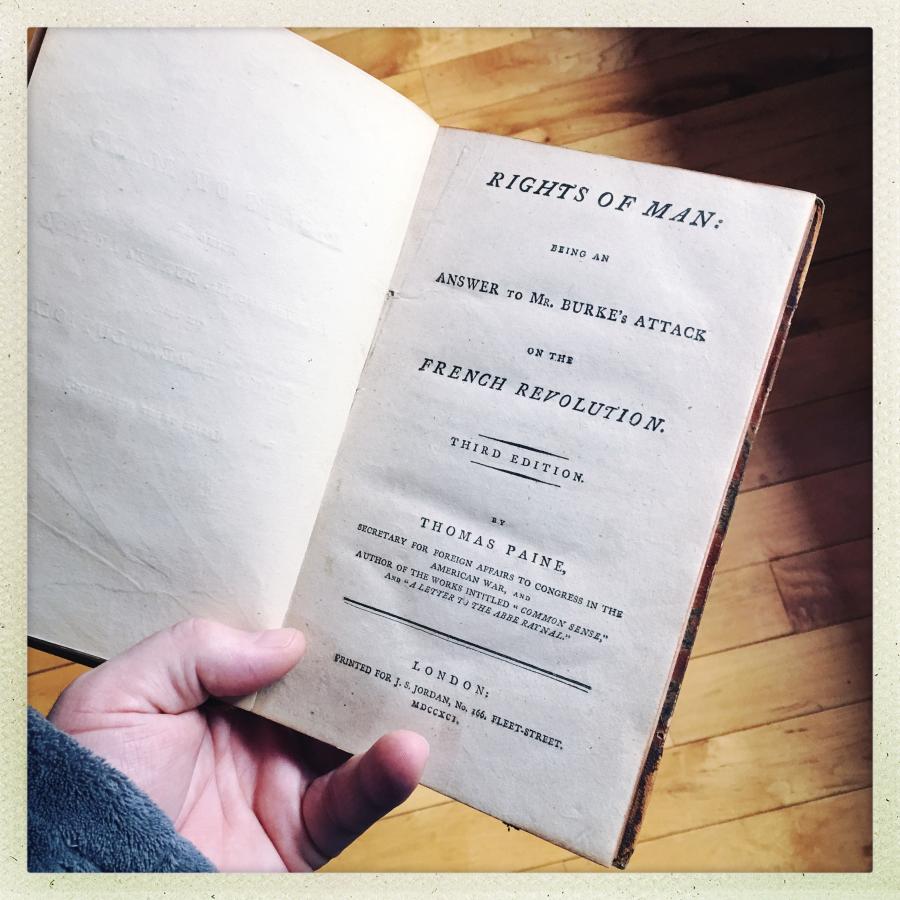 My Paine. You used to be able to find these on ebay in the 90s…

Paine wound up in prison as well, during the French revolution, and was in line for a visit to Place Nation (where the guillotine stood) but the government collapsed and the terror ended just before his number came up.

I have long felt that the freedom of political speech is much more important than other speech (be it religion, or blog comments, or trolling, or whatever) – because there’s more at stake: if you believe that a government gains its authority through the consent of the governed, and represents their will, you simply cannot restrict free speech because you are eradicating the foundation of government. How can you represent the will of the people, if the people cannot express their will?

I despise Twitter, but – this should worry you: the Department of Homeland Security is trying to use its warrant powers to de-anonymize an anonymous Twitter account that has been highly critical of the Trump administration.

This is pure abuse of power. [intercept] It is treason. It is not over-dramatic to say that this challenges the legitimacy of the state:

On March 14, 2017, Defendant Adam Hoffman, an agent within U.S. Customs and Border Protection, transmitted to Twitter by fax a summons, ordering Twitter to produce certain records pertaining to the @ALT_USCIS account. The CBP Summons invoked as authority 19 U.S.C. § 1509. It was signed by Defendant Stephen P. Caruso, a CBP Special Agent in Charge based in Miramar, Florida. A true and accurate copy of the CBP Summons, in the form it was received by Twitter, is attached as Exhibit A.

43. The CBP Summons states that Twitter is “required” to “produce[] for inspection” “[a]ll records regarding the [T]witter account @ALT_USCIS to include, User names, account login, phone numbers, mailing addresses, and I.P. addresses.” The purpose of this request appears to be, and the effect of Twitter’s complying with it likely would be, to enable or help to enable Defendants to pierce the anonymity of the person or persons who established and use the @ALT_USCIS account. [intercept]

Only a “failed state” needs to silence its critics. (Especially when its critics are stuck using a mediocre vehicle like Twitter.)

The absolute right of political free speech must include anonymity. “Voltaire”, for example, was a pseudonym – he used many during his life – often to launch scathing attacks against the church, or philosophers he disagreed with.* When political free speech begins to go anonymous that’s a danger sign: because in a government where the people are confident in their right of speech, anonymity is optional – but as soon as repression is suspected, it becomes necessary. That the President of the United States is a petulant, small-hearted, small-handed, and vengeful ignoramus means nothing – but, that he uses his power to settle personal scores places him in the company of historical figures like the Regent – worth forgetting. We remember the Voltaires.

Game of Thrones has reached ~3 million people, a measly 2% of the population. Paine, FTW

*Voltaire was kind of a troll. But what a troll! He set the benchmark by which all other trolls should be judged.

Let us hope that Trump remains mostly forgettable and eventually just becomes a joke, like Dick Cheney or Richard Nixon.

Mecha Kumihimo » « A Matter of Light