Apparently the Trump administration is drafting an order to review the usage of “black sites” abroad.

In plain English that’s called “conspiracy to commit torture” which is a crime under Section 18 of the US Code, chapter 113c.

(a)Offense. Whoever outside the United States commits or attempts to commit torture shall be fined under this title or imprisoned not more than 20 years, or both, and if death results to any person from conduct prohibited by this subsection, shall be punished by death or imprisoned for any term of years or for life.

(b)Jurisdiction. There is jurisdiction over the activity prohibited in subsection (a) if—

(1) the alleged offender is a national of the United States; or

c)Conspiracy. A person who conspires to commit an offense under this section shall be subject to the same penalties (other than the penalty of death) as the penalties prescribed for the offense, the commission of which was the object of the conspiracy. [Cornell Law Library](emphasis added)

It’s not just a minor crime, either. It is a capital offense.

The provenance of the alleged draft document is under debate. Per the Washington Post:[1]

The document was provided to The Post by a person who said it had been circulated among agencies in Washington for comment. The immediate feedback, this person said, helped convince the White House counsel that the document needed wider distribution and review before being finalized. It was unclear which agencies received the document, but those with the most direct stake would include the CIA, the Pentagon, and the State and Justice departments. 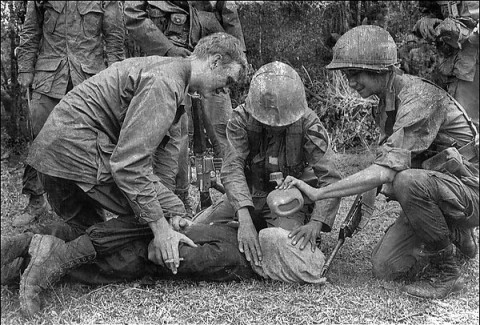 The US executed Japanese prison camp officials who water tortured American soldiers during WWII. CIA interrogators murdered several Afghan civilians during the occupation, one by beating him to near death, then allowing him to die of exposure.

I hope the picture to the right is staged, because the soldier with the canteen is smiling.

The term “extreme rendition” is, of course, another one of those weasel-words the craven lapdogs in the media like to hide behind now that they have a scary new master. It’s just a fancy word for conspiracy to torture. The idea is that you ship someone to someplace where everyone will look the other way, then let someone torture them. That’s the very definition of “conspiracy.” It has been ongoing: we don’t know exactly which president started committing this crime but at least every one since Bush.

It is surreal to me that we can have politicians investigated for years over getting their penis sucked by an intern (which is a Human Resources issue) or mishandling official records in their personal e-mail server, but everyone just puts their fingers in their ears about something that has been a capital crime in the US since 1984.

Someone should perform a citizen’s arrest on the president.