Edited from “Rules for Radicals” by Saul Alinsky

The First Rule: Power is not only what you have, but what the enemy thinks you have.

The Second Rule: Never go outside the experience of your people.

The Third Rule: Wherever possible go outside of the experience of the enemy.

The Fourth Rule: Make the enemy live up to their own book of rules.

The Fifth Rule: Ridicule is man’s most potent weapon.

The Sixth Rule: A good tactic is one your people enjoy.

The Seventh Rule: A tactic that drags on too long becomes a drag.

The Eighth Rule: Keep the pressure on.

The Ninth Rule: The threat is usually more terrifying than the thing itself.

The Tenth Rule: The major premise for tactics is the development of operations that will maintain a consistent pressure on the opposition.

The Eleventh Rule: If you push a negative hard and deep enough it will break through into its counterside.

The Twelfth Rule: The price of a successful attack is a constructive alternative.

The Thirteenth Rule: Pick the target, freeze it, personalize it, and polarize it.

Alinsky’s view of tactics is forthright and – I’m probably reading into it – profoundly skeptical.* He seems to recognize that all politics is manipulation and that we’re endlessly dealing with the products of manipulation, so manipulation is our only tool. You’ll notice that there’s no appeal to “right” or “wrong”, Alinsky’s approach is concerned with what works. I often wonder if that’s why he’s seen as such a scary person by authoritarians: they want to convince themselves that they’re right and – in accordance with his Third Rule he’s going outside of the experience of the enemy and ignoring that they want to think they’re right. Alinsky’s tactics exploit the intellectual laziness of the authoritarian mindset, which generally wants to assume that they’re correct (if not right) and not examine their presuppositions more carefully; when you’re up against an opponent that follows their presuppositions, you can fairly accurately predict how they will respond.

The Seventh Rule, and the Third Rule, combined, encourage the user to explore all the options on the battlefield, which is the main characteristic of great tacticians: use everything and don’t simply assume the engagement is going to proceed in the same old way, to the same old conclusion. Before Napoleon Bonaparte became hidebound, his great victories were examples of making the enemy fight outside of their comfort-zone. 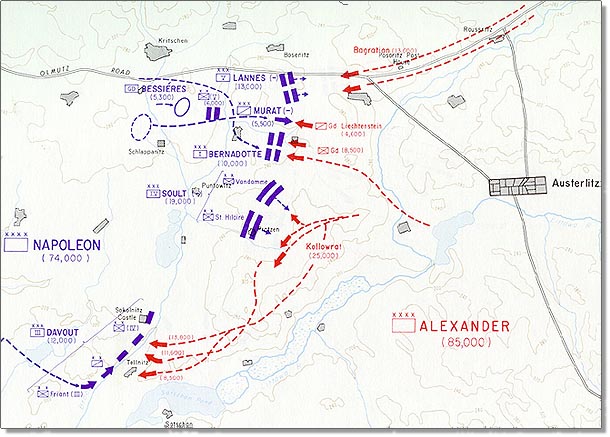 In a signature victory, Napoleon realized that the Russian army, which outnumbered him slightly, typically didn’t have very good command/control, and he decided to take them out of their comfort-zone by encouraging them to try a more complicated maneuver than he thought they were capable of. At the opening of the battle, Marshall Davout was ordered to move up on the Russian left flank (lower left of the illustration) so that the Russians attempted to re-orient and block him, which disorganized them and opened them up to a hammer-blow attack straight up the center from Marshall Soult’s force. The genius of Napoleon’s play was at multiple levels, first, if the Russians had maneuvered neatly and not gotten disorganized, they still would have split their forces and potentially left themselves open to being defeated in detail. Secondly, if the Russians had responded effectively by falling back onto their flank, so what? At least they weren’t attacking.

Alinsky’s views on tactics are simply stated, yet deeply refined.

I remember specifically that when the Woodlawn Organization started the campaign against public school segregation, both the superintendent of schools and the chairman of the Board Of Education vehemently denied any racist segregationist practices in the Chicago Public School System. They took the position that they did not even have any racial-identification data in their files, so they did not know which of their students were black and which were white. As for the fact that we had all-white schools and all-black schools, well, that’s just the way it was.

It’s rare to encounter such clarity about tactics and strategy.

A note on style: Alinsky’s text includes the rules in blocks of text with his explanation of the rules. I extracted them gingerly and put them all together, trying to retain the flavor with Alinsky’s long-text numbering scheme. Because I substantially changed the format of the text, I did not block-quote it.

The entire discussion, in Alinsky’s original form, is highly worth reading.

I’m fascinated by the degree to which Saul Alinsky has become a scary nightmarish figure for the authoritarian end of the political spectrum. Is it because Hillary Clinton wrote her polisci thesis on Alinsky, and met with him, and caught his cooties? It’s not as if Clinton came away from the encounter radicalized – if anything, it seems that Clinton rejected Alinsky’s view of community politics in favor of more centralized politics. I believe that when the Clintons first came to power and Hillary tried to tackle medical insurance, that she was actually trying to improve things. They underestimated the forces that were arrayed against them.